9 Reef Mound
Back to map 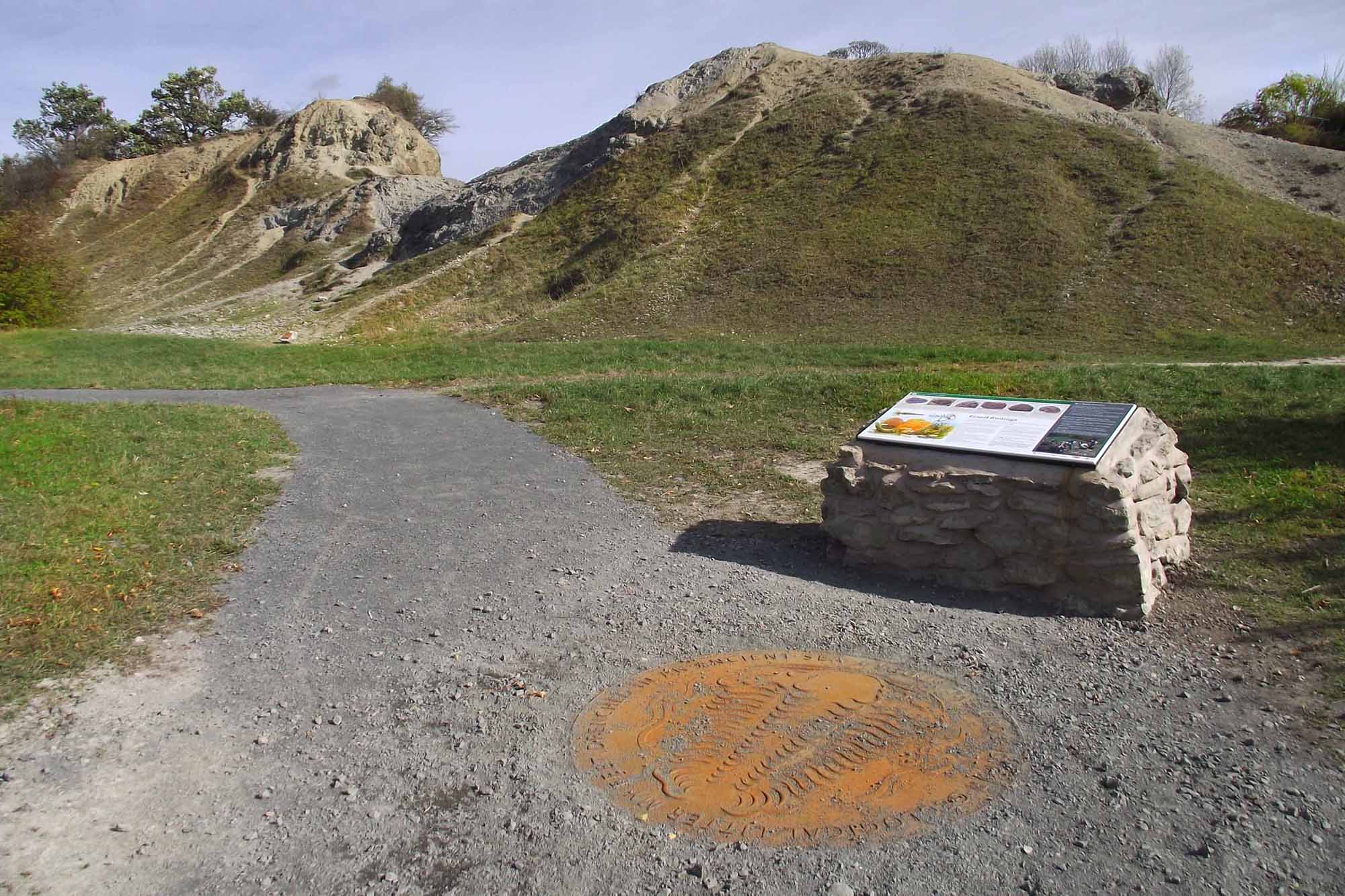 Take a close look at this mound and you will see large numbers of lots of different types of fossils form the mound. 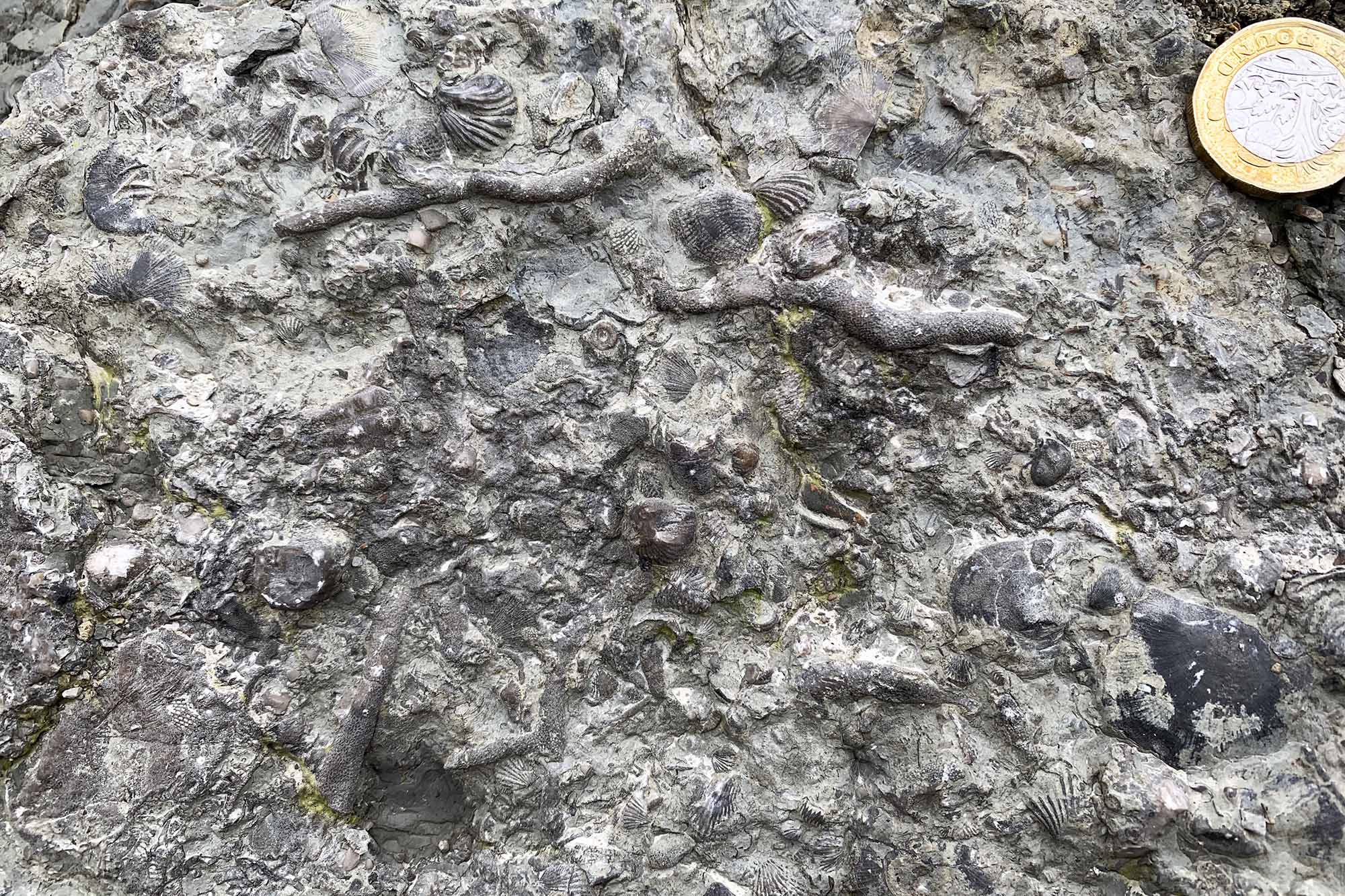 Close up the rock of the reef mounds is full of fossils! You do not have to look that hard to see examples like that in the picture. This place was once teaming with life, in the warm sunlit Silurian seas. The experience would be like diving in a place like the Great Barrier Reef of the present world.

Sounds of the reef 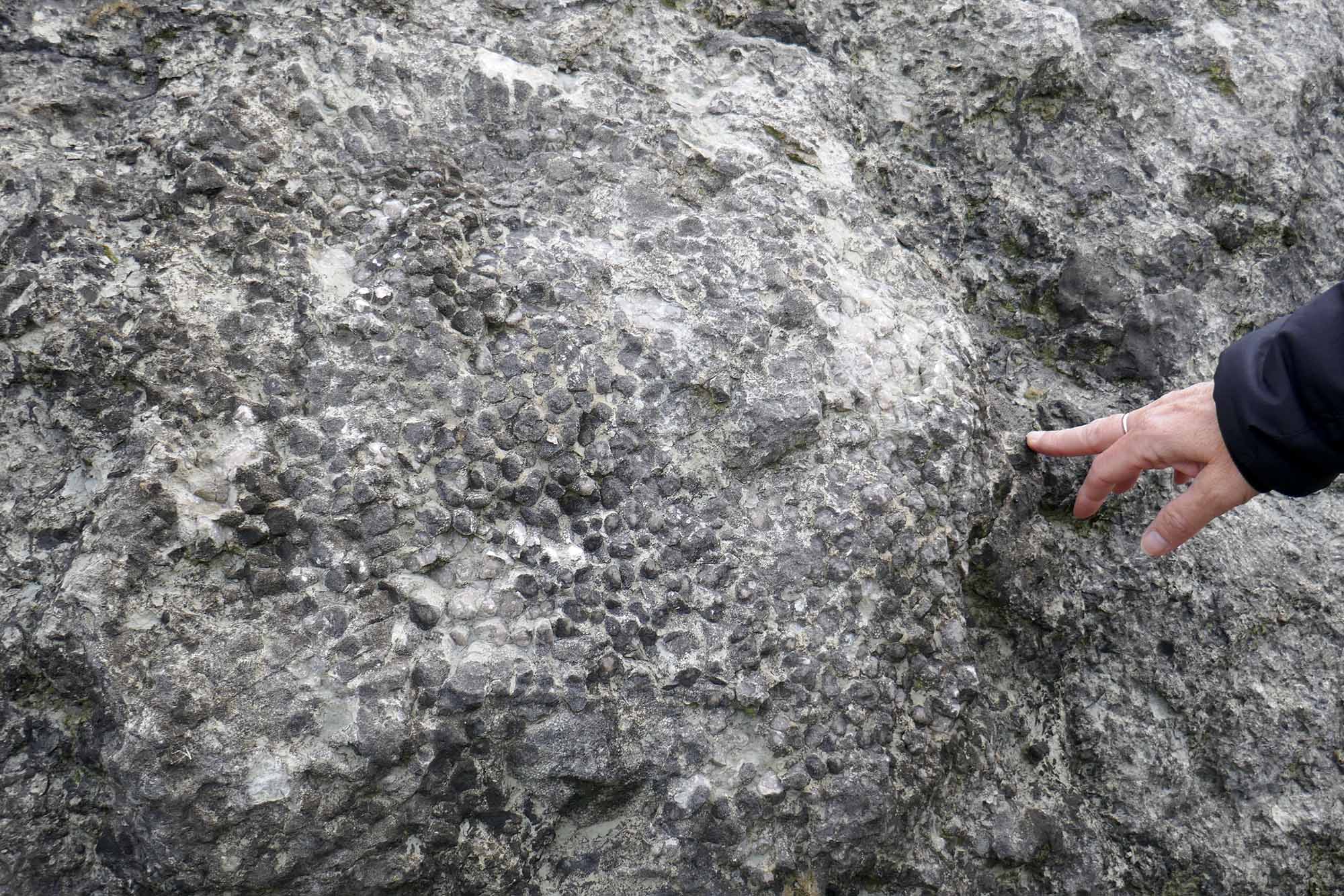 The main corals are rounded colonies with lots of holes in their surfaces where the coral animals lived. They built these limestone structures around themselves for protection. Coral animals (polyps) are delicate soft animals with a ring of tentacles around their central mouth (a bit like a sea anemone of today) and they would catch tiny animals swimming past with special stinging cells in their tentacles. 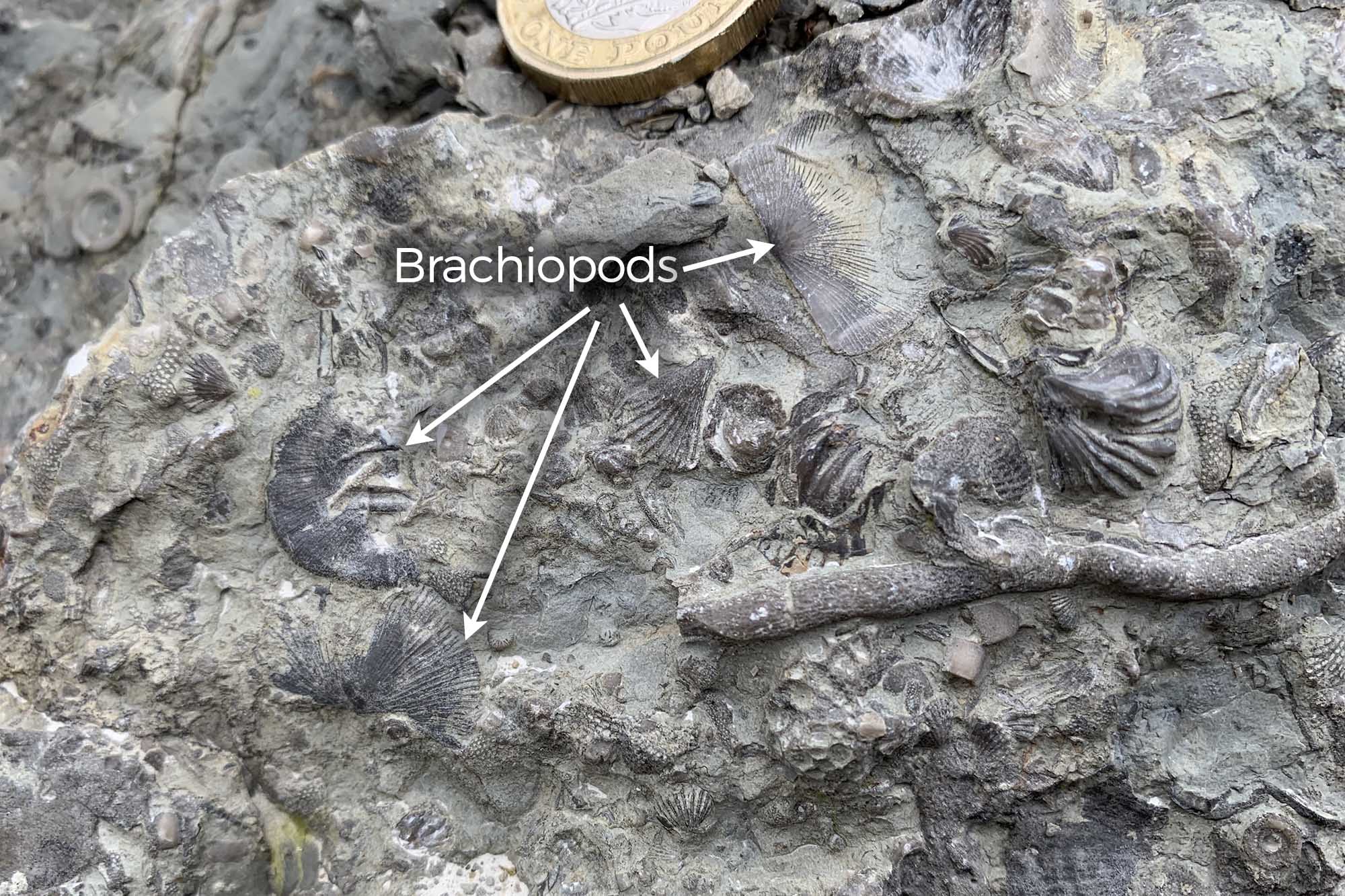 The shells of brachiopods are the type of fossil you will see the most of in the rocks of the reef mounds. Brachiopods are marine animals that live between an upper and lower shell, also known as valves.

Although many species of brachiopod still live today from tropic to polar waters, they were most abundant from the beginning of the Cambrian to the end of the Permian. 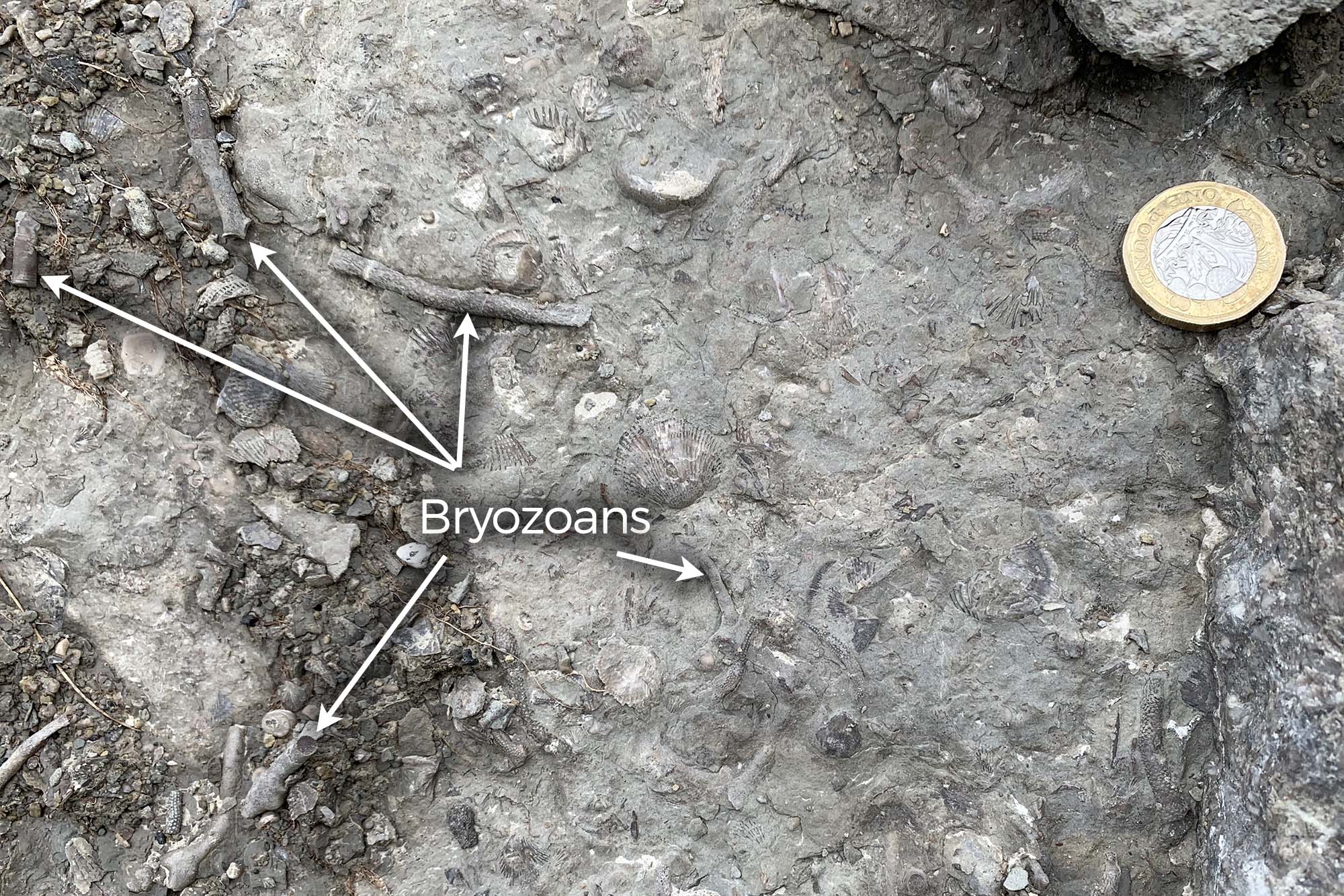 One of the easiest fossils to find are tiny twig-like tubes covered in tiny pin-holes. These are branching bryozoans. A bit like the corals they had colonies of tiny soft animals living within the little pores of these fossils.

Other fossils you can find here include brachiopods and bivalves (different types of fossil sea-shells). There are more than 150 different types of these found in the limestones of Wrens Nest. Their shapes and sizes vary a lot and reflect how they lived on the seabed. Elongate smooth ones probably burrowed in the limey mud, thick shelled rough ones probably anchored to the reef and could withstand the waves crashing on the reef. 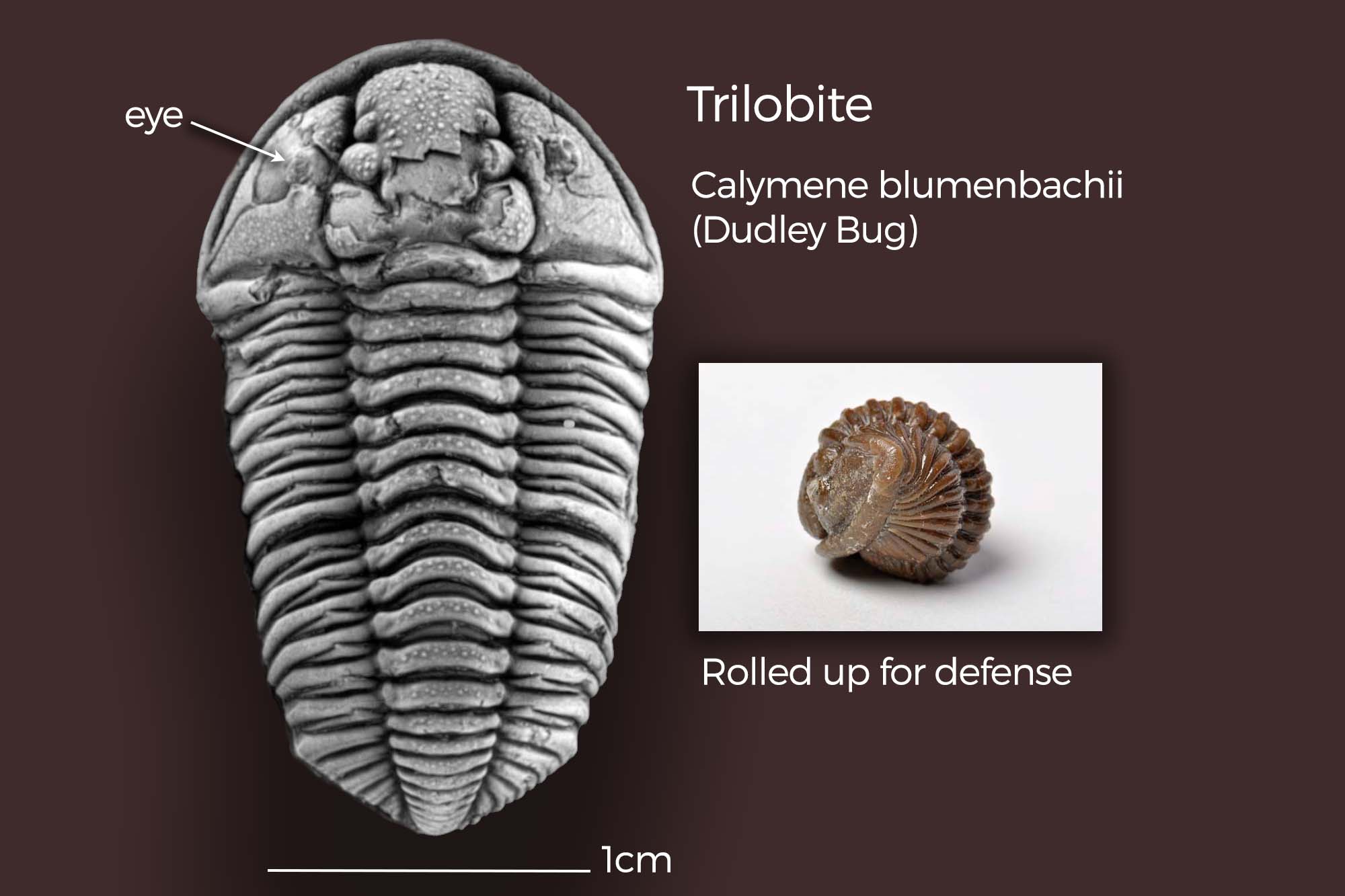 If you are lucky you might find heads and tails of trilobites. There are many different types of trilobite here. Some are very small and some are large with thick shells. They probably crawled and swam around the reefs looking for food and shelter in the nooks and crannies of the reef mass.

Trilobites first appeared in the fossil record in the early Cambrian becoming extinct around the end of the Permian 250 million years ago (around 300 million years of existence). Trilobites are marine arthropods and were very abundant and diverse in form, their fossilised exoskeltons are found extensively in Cambrian, Ordovician and Silurian rocks in particular. Trilobites species ranged in length from a few millimetres to around three quarters of a metre. The trilobites found in the Dudley area are typically a few cemtimetres long. 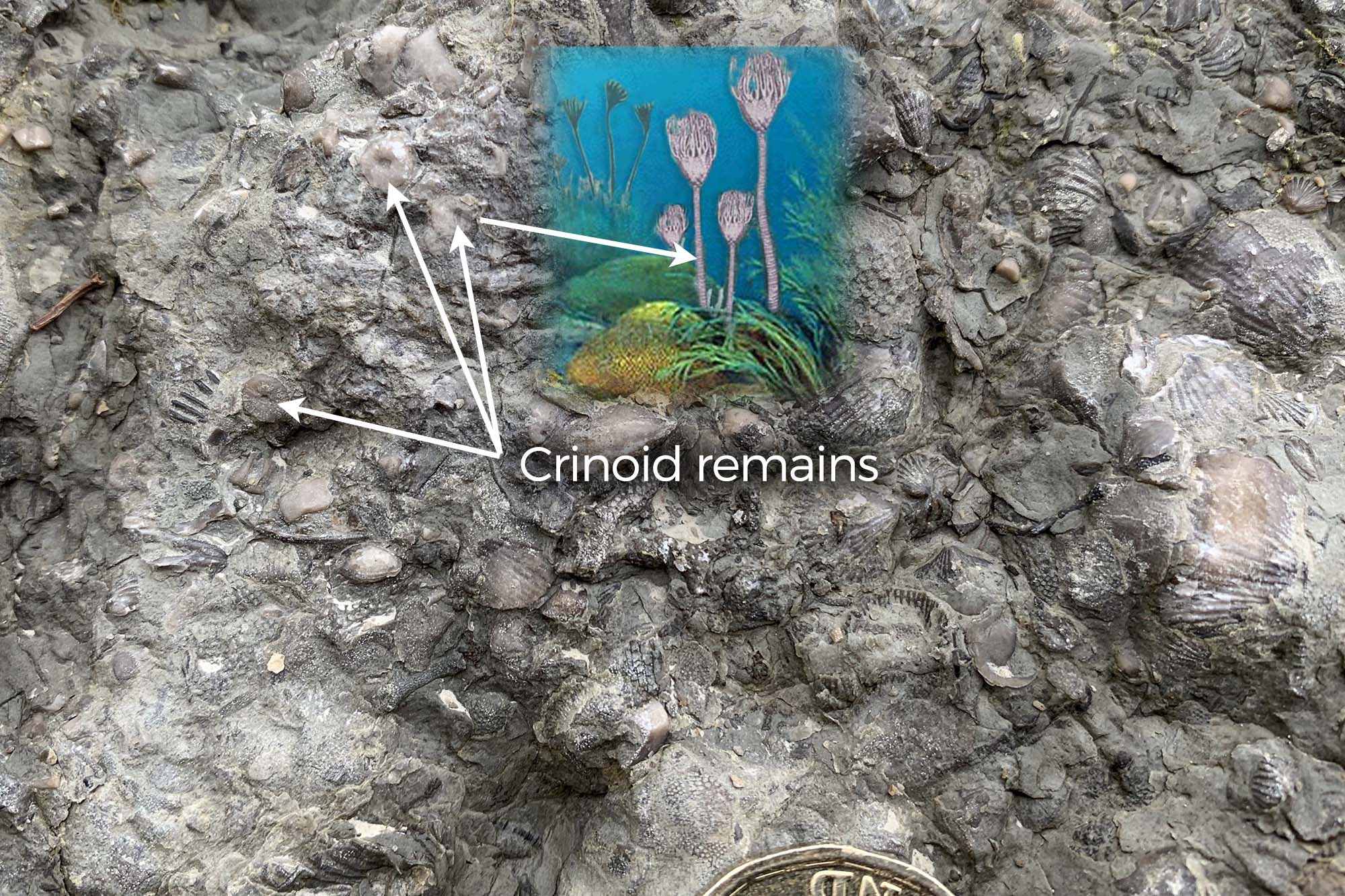 You will probably spot lots of small fossil rings or tube like fossils here too. These are bits and pieces of fossils called crinoids. There are usually small sections of the stems or arms of these creatures and can look like tiny hoops or polo mints.

The complete animal has a root or ‘hold fast’ that anchors to the seabed or reef. Then there is usually a long stem made of these hoops (that geologists call ossicles or columnals) on top of this there is a crown which has a central cup covered in plates of calcite surrounded by feather-like arms. The whole thing looks a bit like a flower and these creatures are sometimes called ‘sea-lilies’ but they are actually more like upside-down starfish on a flexible stem. They caught small creatures or filtered tiny plankton from the seawater as they gently swayed with the tides. 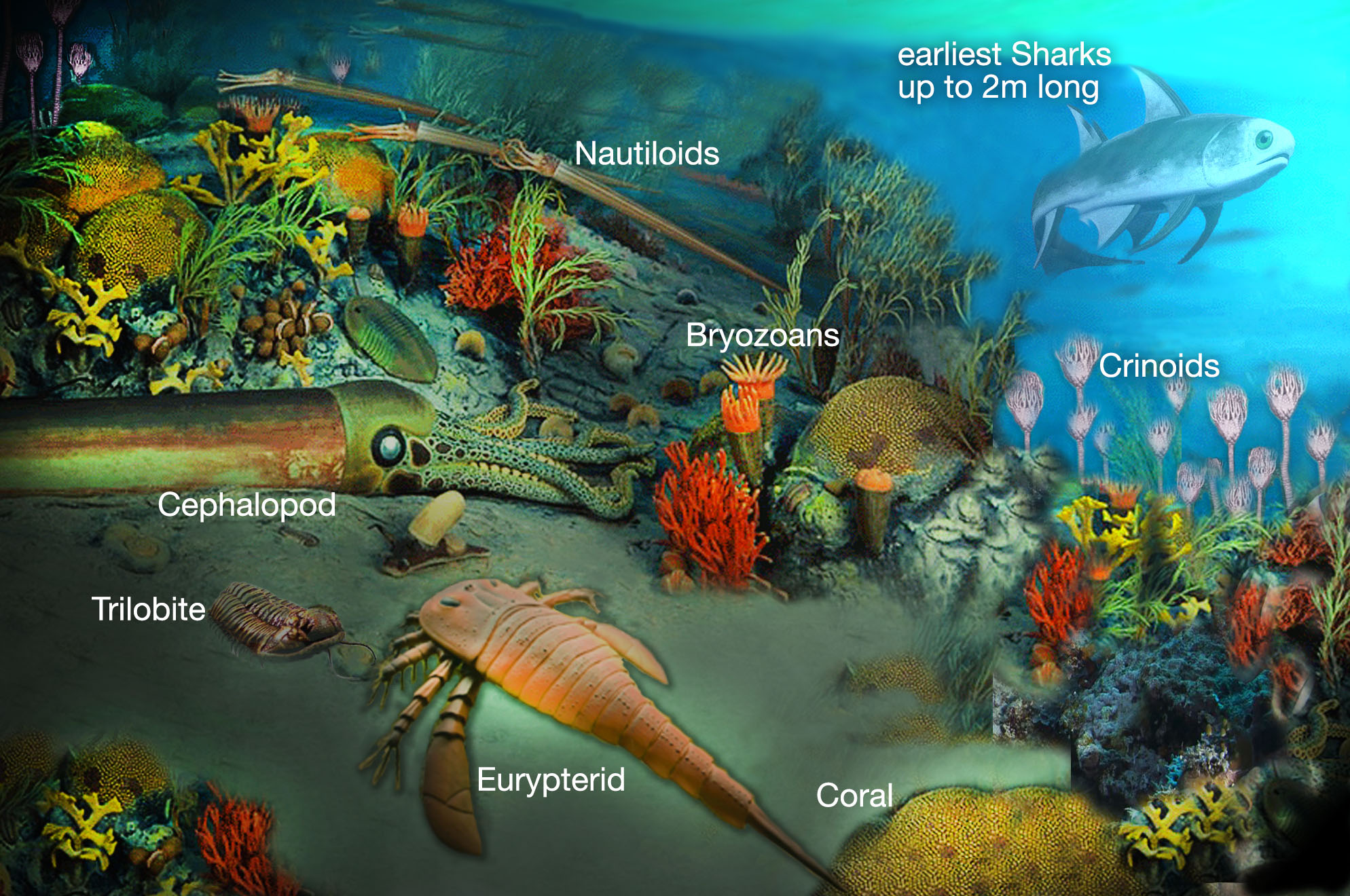 Most of the fossils that you will see here are the hard shelly parts of animals that once lived on the reef or the nearby seabed. You will see that now they are often lying jumbled as a shelly layer or in life position on the reef mass. They are now all grey/brownish like the weathered limestones in which they are preserved, but when they were living creatures they would have had the colour and vibrant life styles of the living reefs that we see today such as the great barrier reef of the coast of Australia.

The fossilisation process in these limey seas slowly formed the fossils within the rock as the shells were buried in layers of shell sand or limy mud building up on the seabed over time. The soft tissues of these creatures rotted away and the harder shelly parts slowly were replaced and remineralised by calcium carbonate. Their glowing colours were lost in the process but the fine detail of the shapes and textures on the fossils was preserved, making this one of the most important fossil sites in the world for the Silurian Period.

What do we call the tiny coral animals that live inside the stony reef structure?

How many different species of shelly fossils are found in the limestones of Wren’s Nest?

What do the corals tell us about the conditions of the ancient that was once here?