8 Quarry View
Back to map 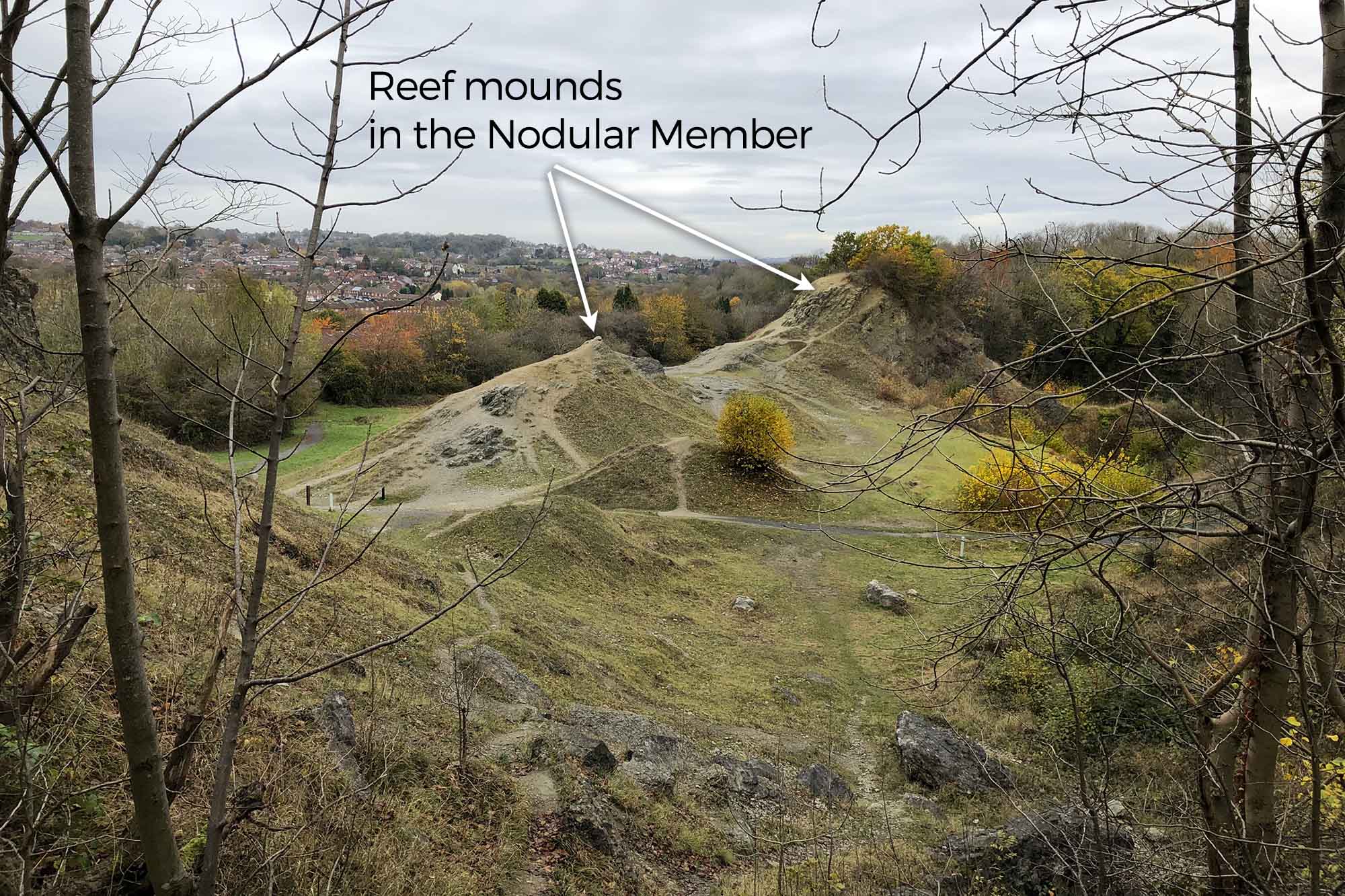 The two large humps are coral reef mounds (bioherms) formed in the warm shallow waters of the Silurian Sea.
Site 8 is located at the top of the steps along the path. 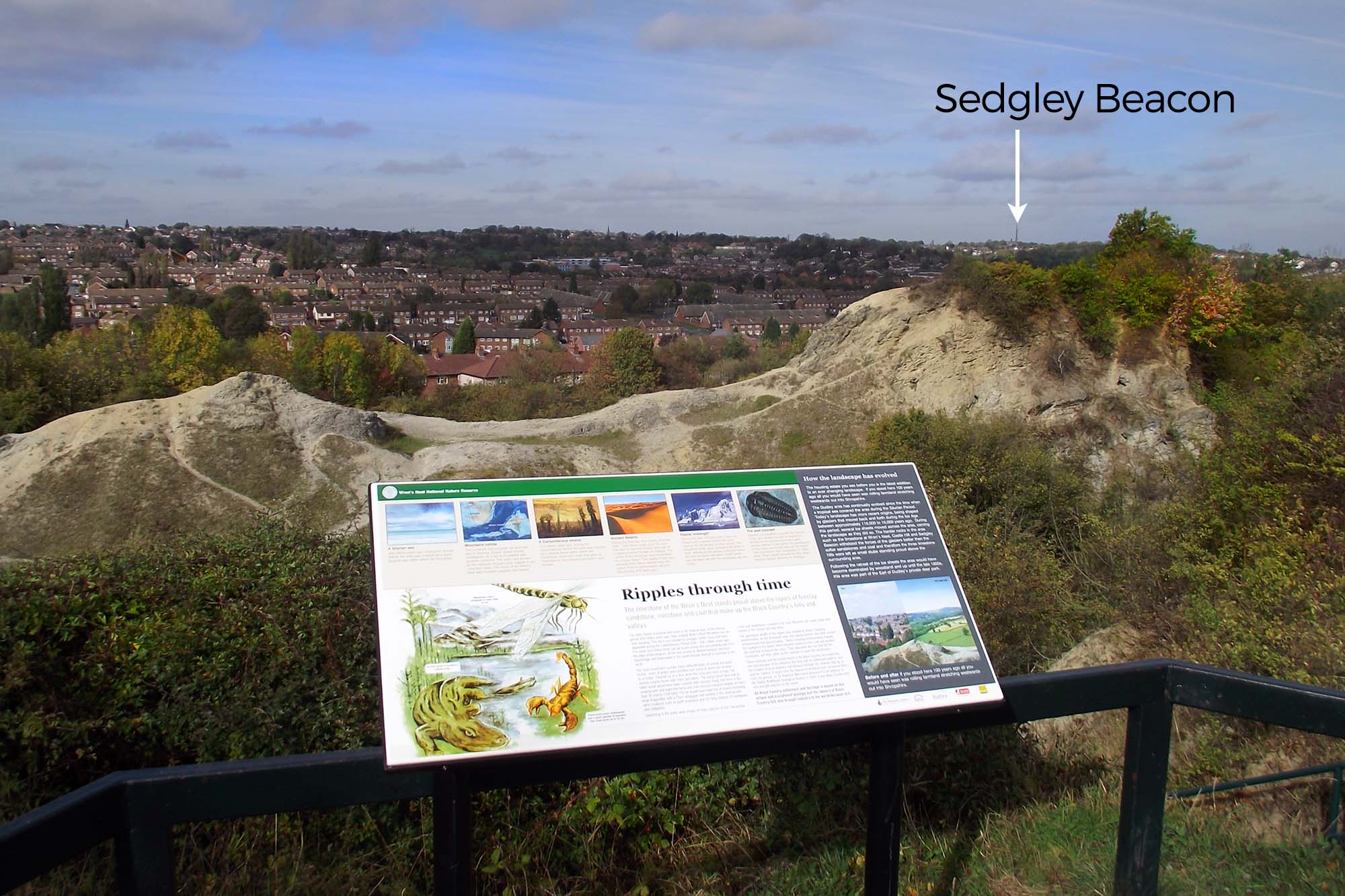 From this vantage point you are looking down into what is know locally as Marsh’s Quarry. The scale of limestone mine working and the distance between the two thick limestones that were once worked here can clearly be seen. The dip of the rocks showing the grain of the landscape shows that the landscape has undergone large uplift and the valley and distant ridge again testify to a long period of erosion and landscape change over more than 400 million years.

The last two pictures in this section provide information on the Carboniferous and Permian times which follow about 100 million and 150 million years after the Silurian, placing this area into radically different environments, of tropical rainforest, then a vast harsh desert. 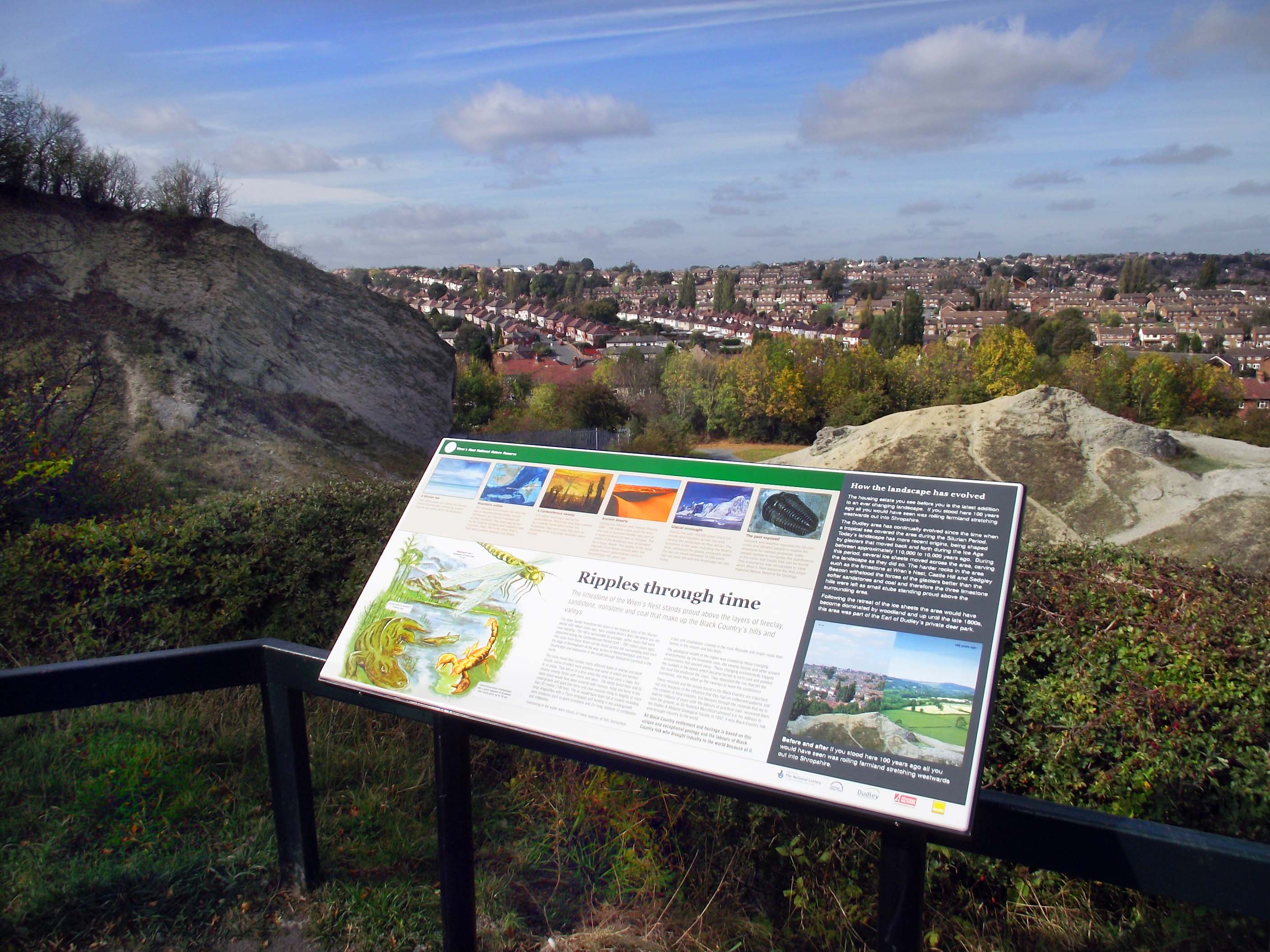 The information board quickly introduces the major episodes in that long journey across geological time witnessed by this site.

This is also the best vantage point from which to appreciate how close to local communities this most important geological site is. It literally is an ancient seabed surrounded by a sea of houses. Many of the families of these homes have proud family connections with the mining of the area. 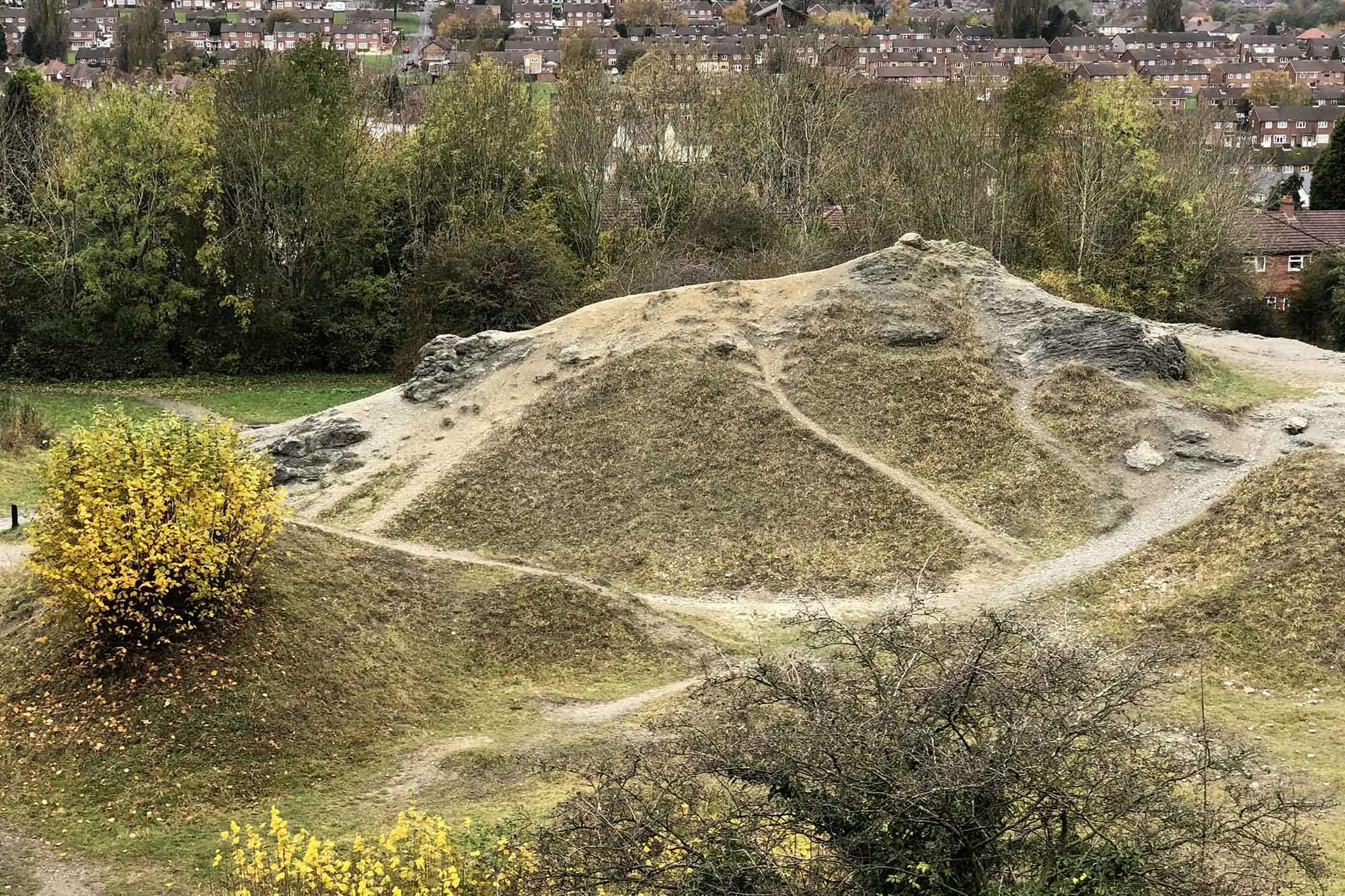 A reef mound, also known as a bioherm – a large lumpy coral mass. This would have been formed by a localised (patch) reef in the Silurian shallow sea around 420 million years ago.

It is important to note that the reef mound occurs in the middle part of the Nodular Member, whereas the one at the Seven Sisters was within the Lower Quarried Limestone. This means that these patch reefs were growing and dying on these ancient seabeds throughout at least the lower half of the rock sequences exposed at the nature reserve (at least half a million years). 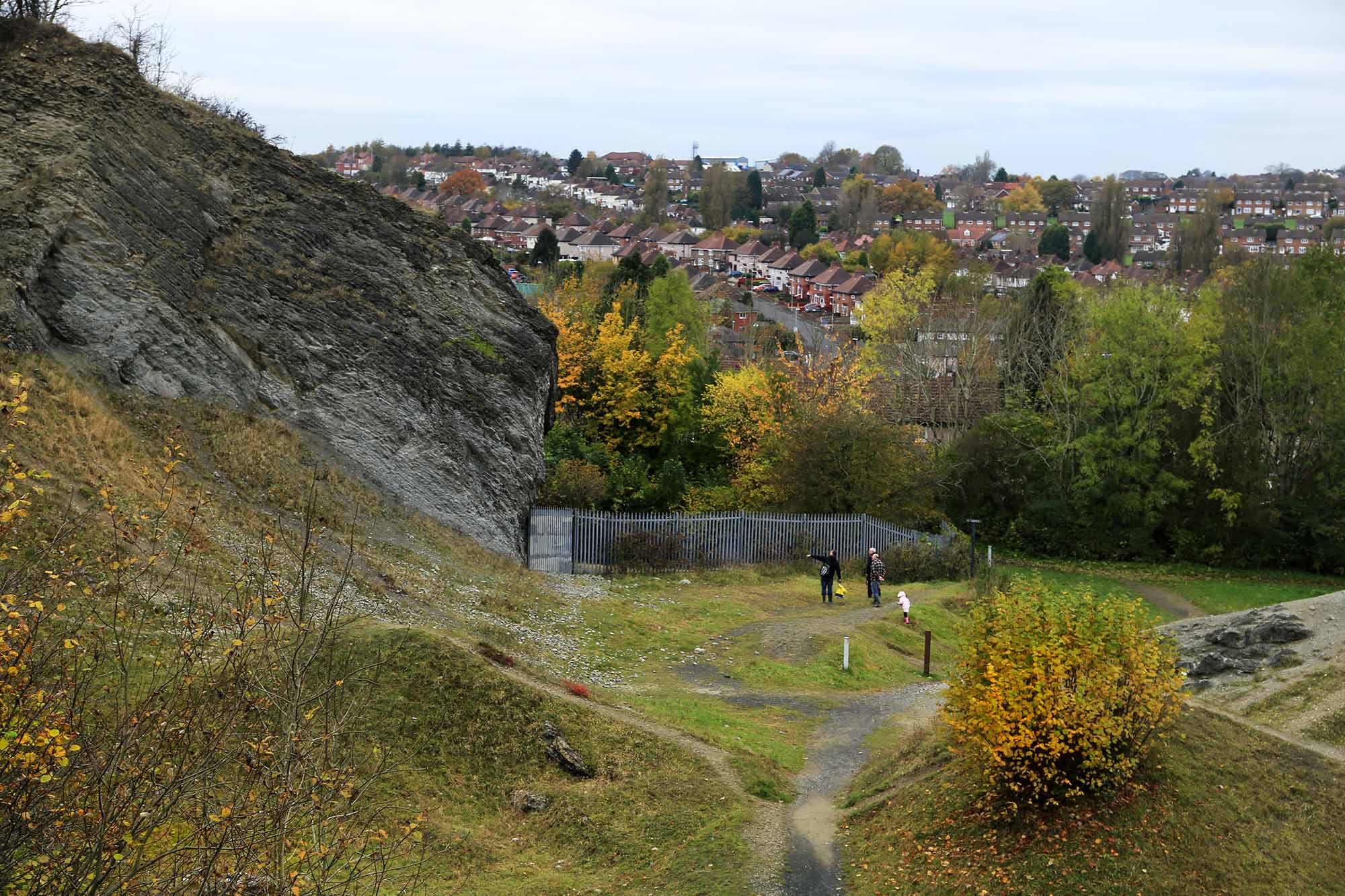 The main quarry face consists of the Nodular Member. The areas of broken rock (scree) are good fossil hunting places. DO NOT USE HAMMERS and never attempt to touch the rock face. 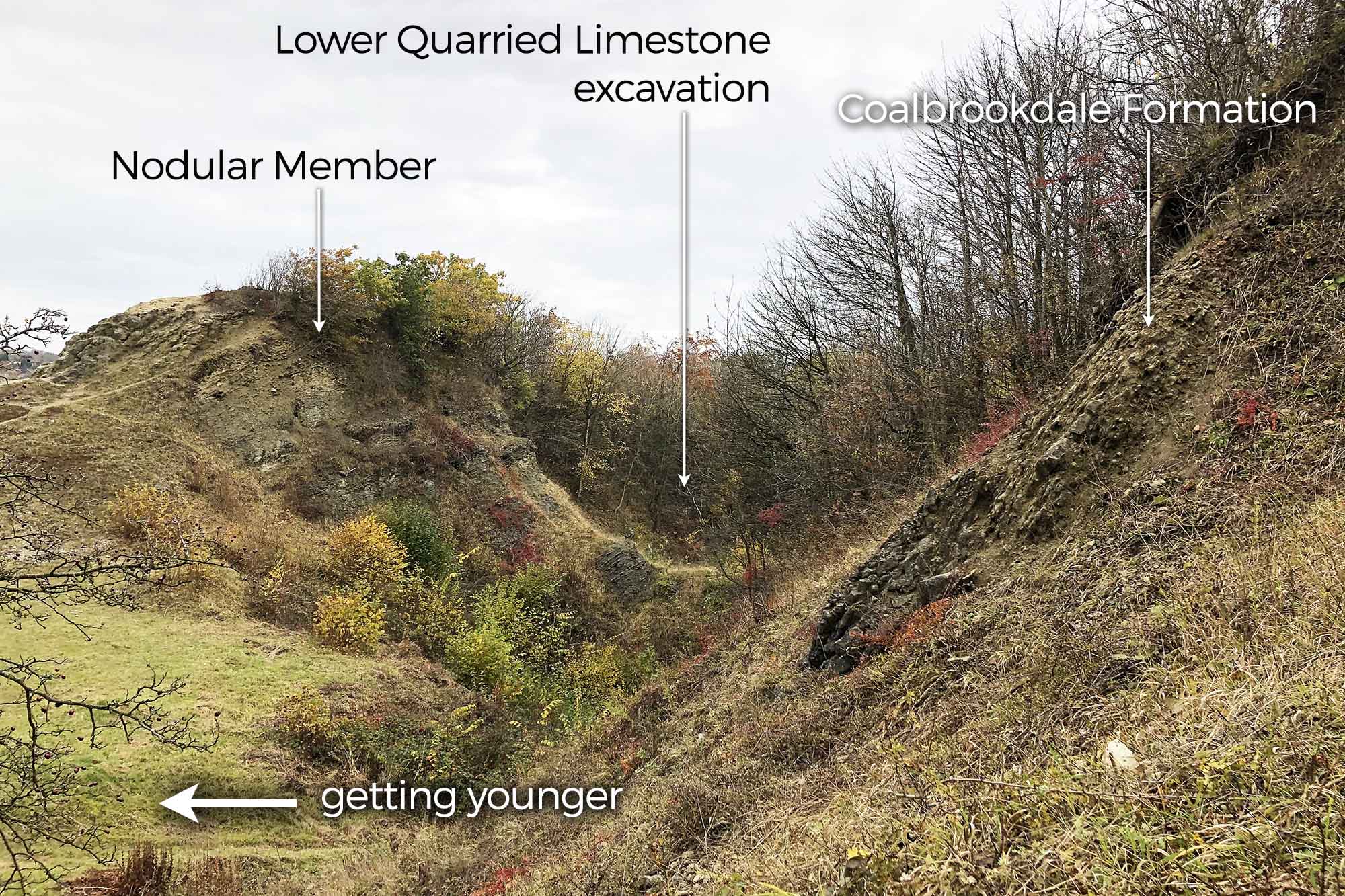 This view (to your right about half way down the steps) shows the gulley created by the excavation of the Lower Quarried Limestone Member. As you move forward you are moving onto younger rocks. The top of the steps sit over Coalbrookdale Formation rocks, the oldest formation in the Wren’s Nest. 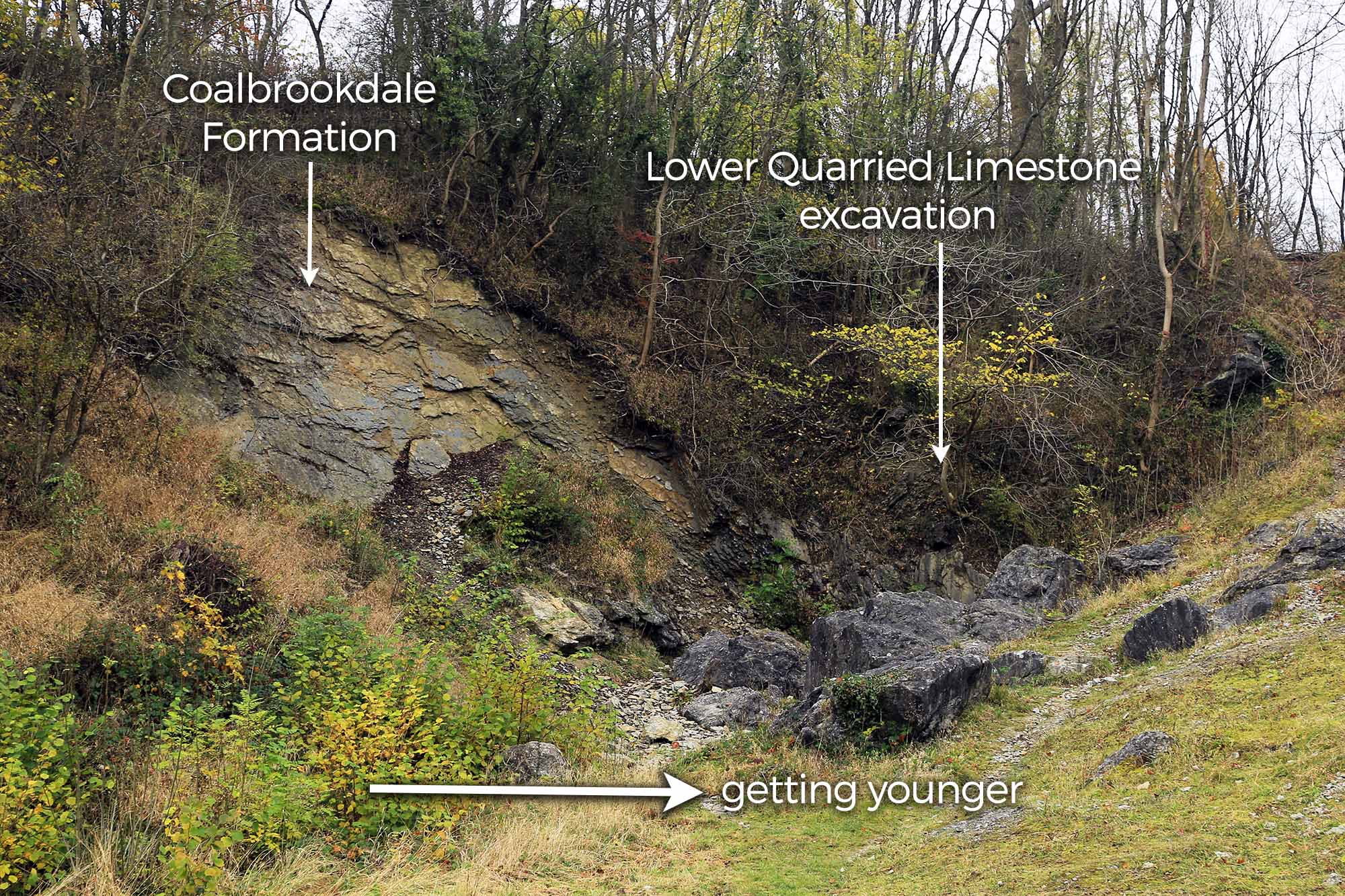 From the base of the steps look at the far left corner of the main quarry rock face. There you will see the westward dipping beds of the Coalbrookdale Formation, formed when the sea was deeper. Next is the gully where the Lower Quarried Limestone has been removed. To the right, the rest of the quarry face exposes the Nodular Member. 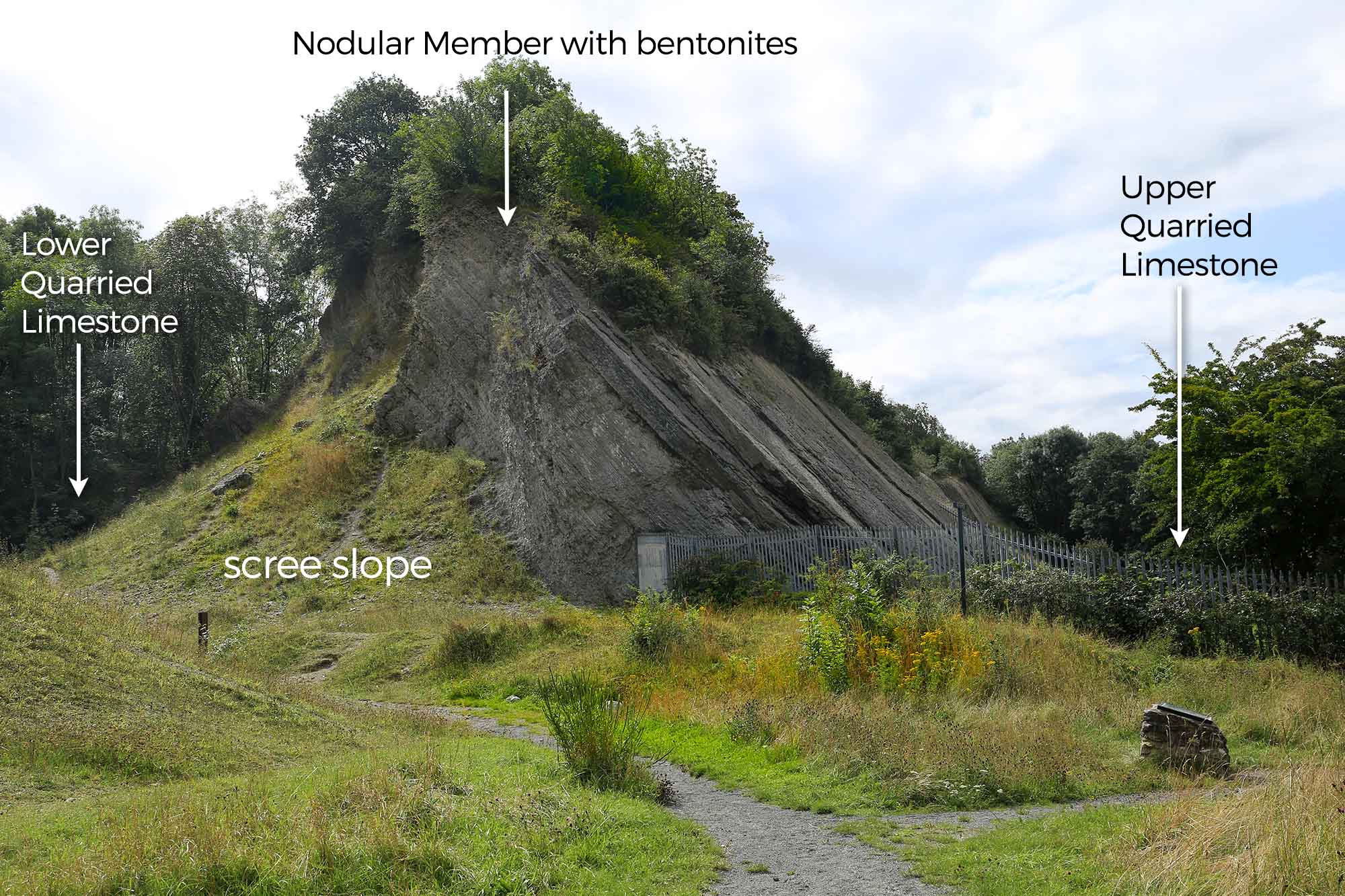 In this high rock face, on the left hand side, there are thin layers that have been easily worn away. These are the locations of bentonite layers that were once volcanic ashes from a number of eruptions. The scree slopes all around here are good fossil hunting places. NEVER HAMMER ROCKS here or get too close to the main rock face.

The steep dip of the Nodular Member beds is very clear, with the valleys either side from where the Lower and Upper Quarried Limestones were extracted. The rocks are getting younger from left to right (east to west). 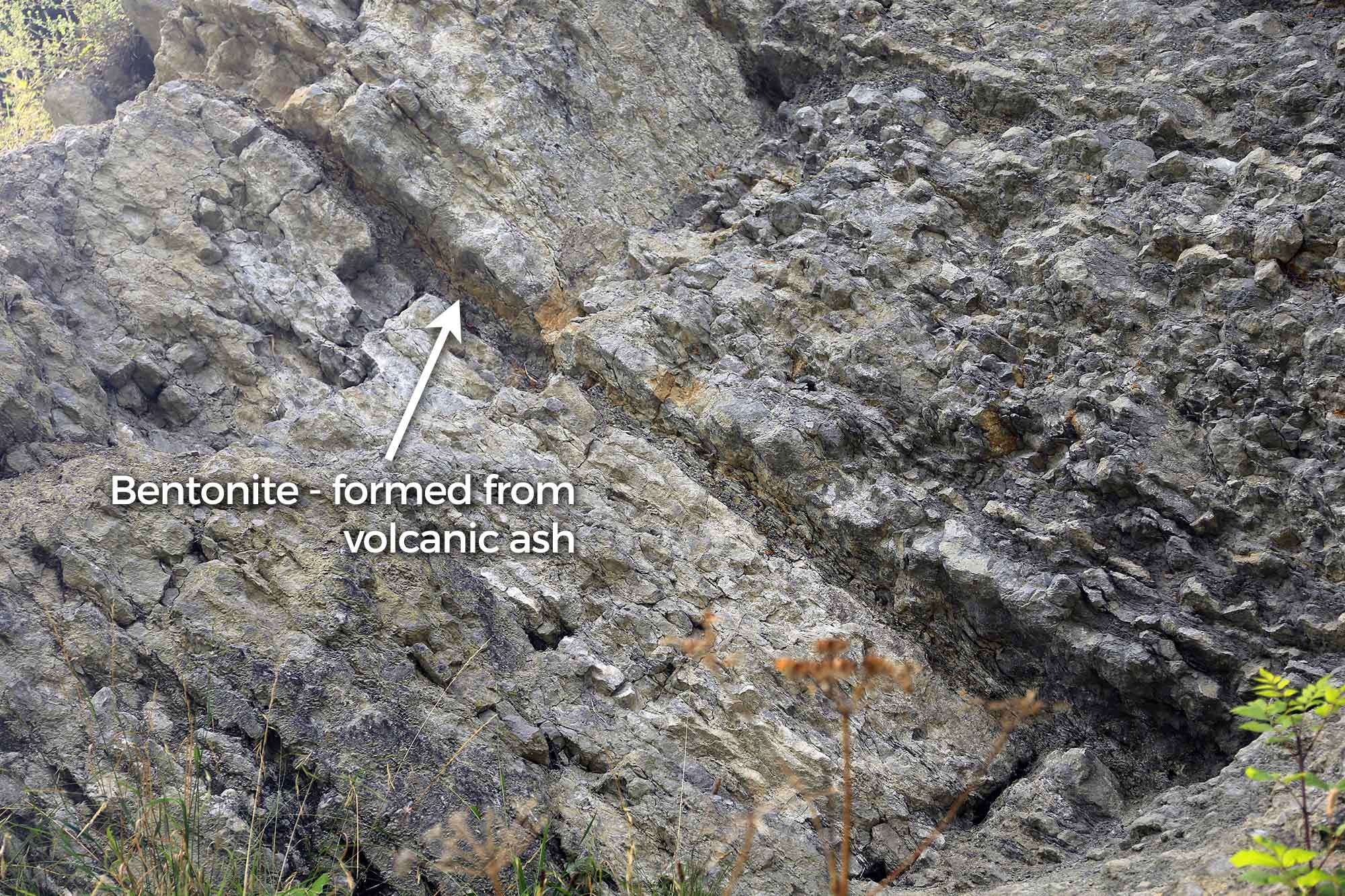 Close up of one of the bentonite beds within the Nodular Member. What is now a bentonite clay would once have been a layer of fine volcanic ash deposited on the sea bed form the violent eruption of a volcano.

The volcanoes resulted from the progressive destruction of the Iapetus Ocean plate beneath this area of the crust in Silurian times. The exact location of these volcanoes is not known. Possible candidates are hinted at by volcanic rocks of around the right age located in the Bristol area. Volcanic ash can be carried hundreds of kilometres in the atmosphere as was demonstrated in 2010 by the eruption of Eyjafjallajökull in Iceland, when its ash was carried well into Europe disrupting air travel. 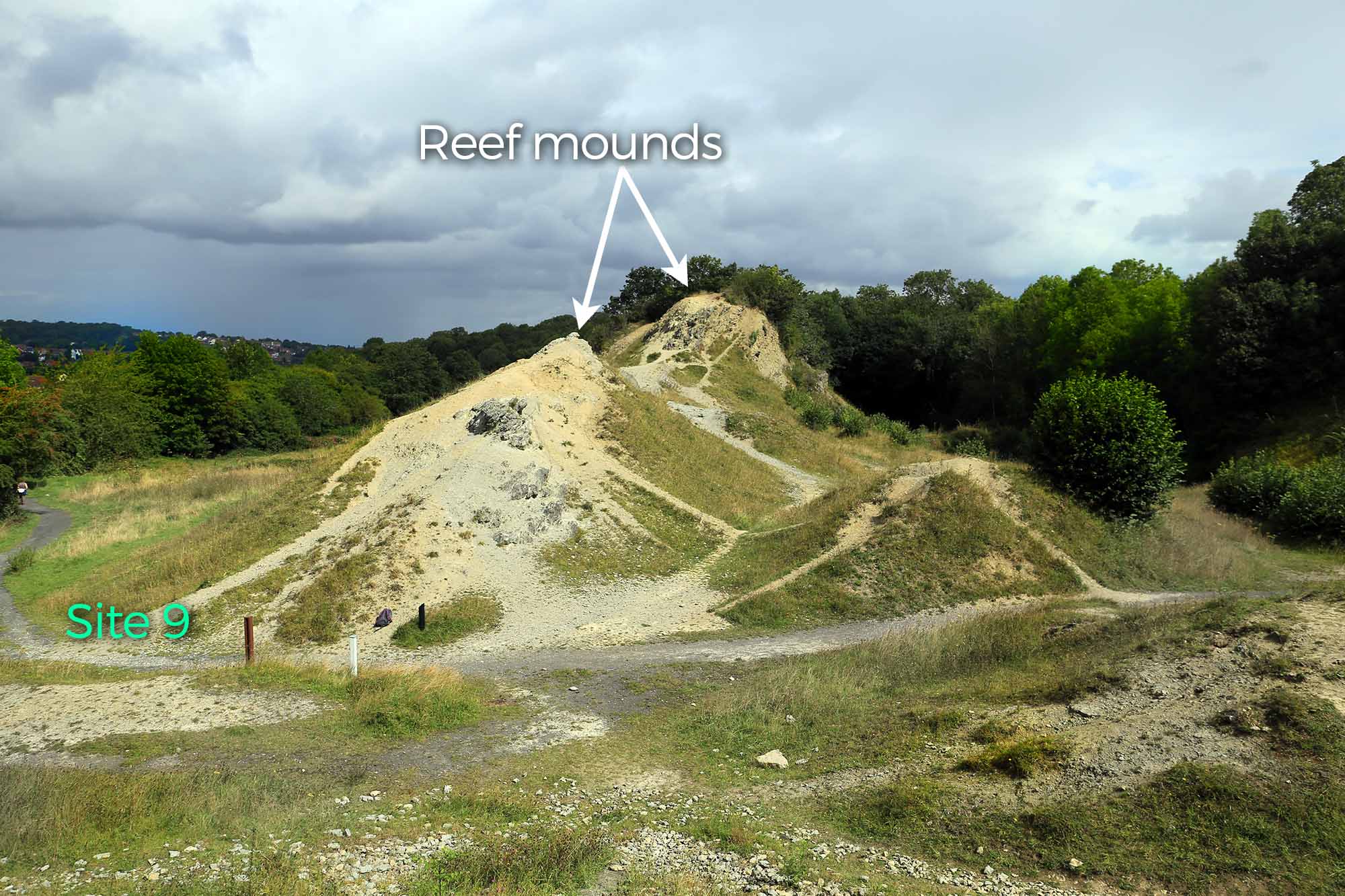 Before moving onto Site 9 – the Reef Mounds – complete Task 8! 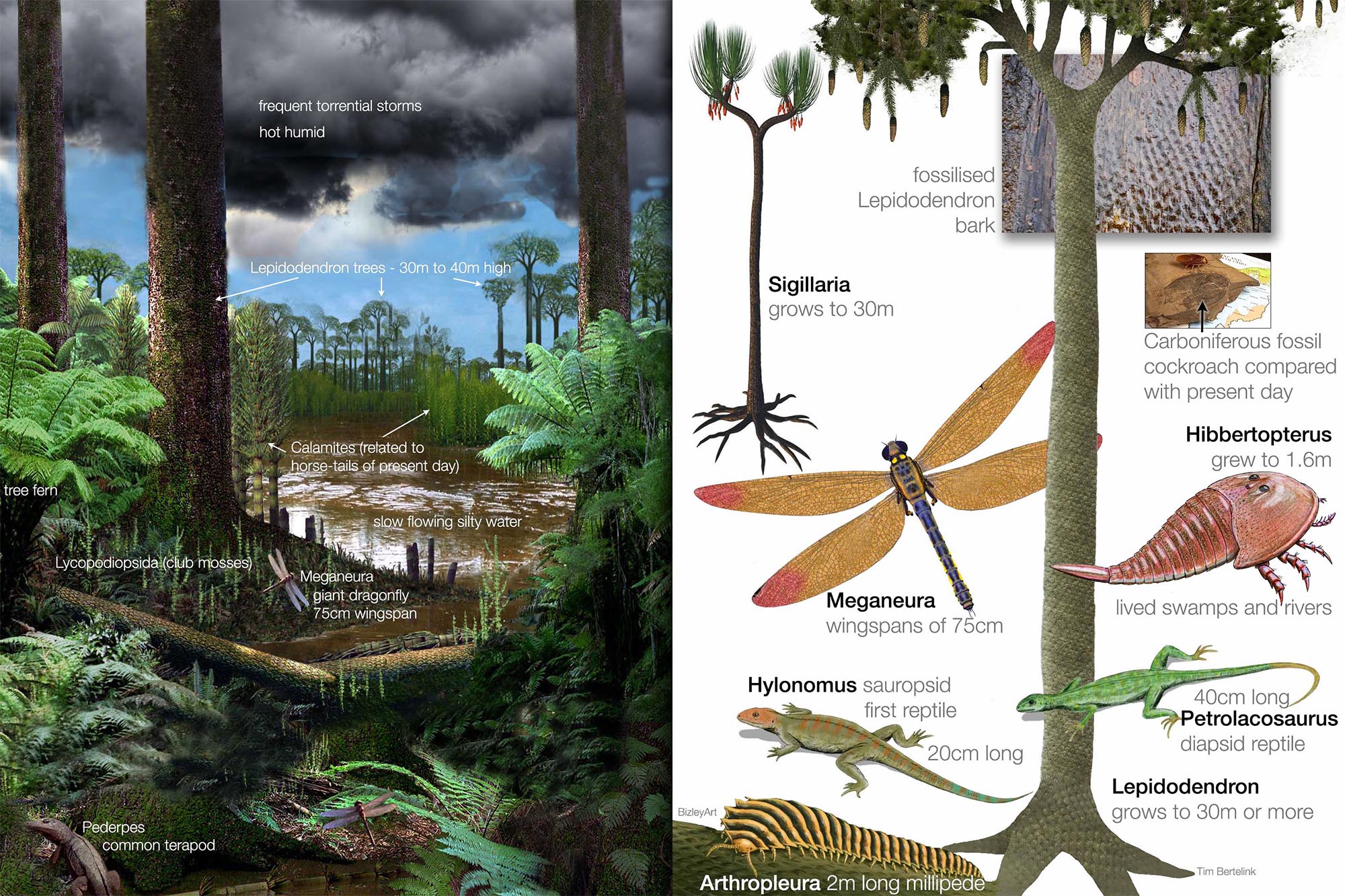 Sounds of a Carboniferous rainforest

Time of the rainforests

In the Carboniferous period (around 310 million years ago) this area was situated close to the equator and covered in vast tropical rainforests. The decaying vegetation of those forests formed the coal seams of the Black Country coalfields. The forests were full of gigantic insects and other animals, but no birds or flowers they were yet to evolve on the planet.No Carboniferous rocks cover the Wren’s Nest area today, but they are to be found all around beneath the Black Country – look at the MAP in Voyager.

Suggest the source of the rainforest sounds in the above track.

Large rivers flowed mainly towards the south into the Rheic Ocean. At times the sea invaded northwards leaving beds with fossils of marine creatures, between the terrestrial beds of sandstone, clays and coal seams. The atmosphere of the Carboniferous seems to have been very rich in oxygen, up to 35% of the atmosphere as around 21% in the present day. With so much oxygen lightning possibly triggered great fire storms in the forests (there is fossil evidence for this) – the wet conditions may not always have been able to counter the combustibility that such a high level of oxygen would encourage. To sea the Earth in Carboniferous times, touch the CLOCK, scroll the timeline to the Carboniferous, touch the globe in the grey panel and interact with the 3D view. Note the extensive glaciation over the southern pole. It is believed variations in the extent of this glaciation could have been a contributory factor to the frequent incursions of the sea during the deposition of the coal measures. 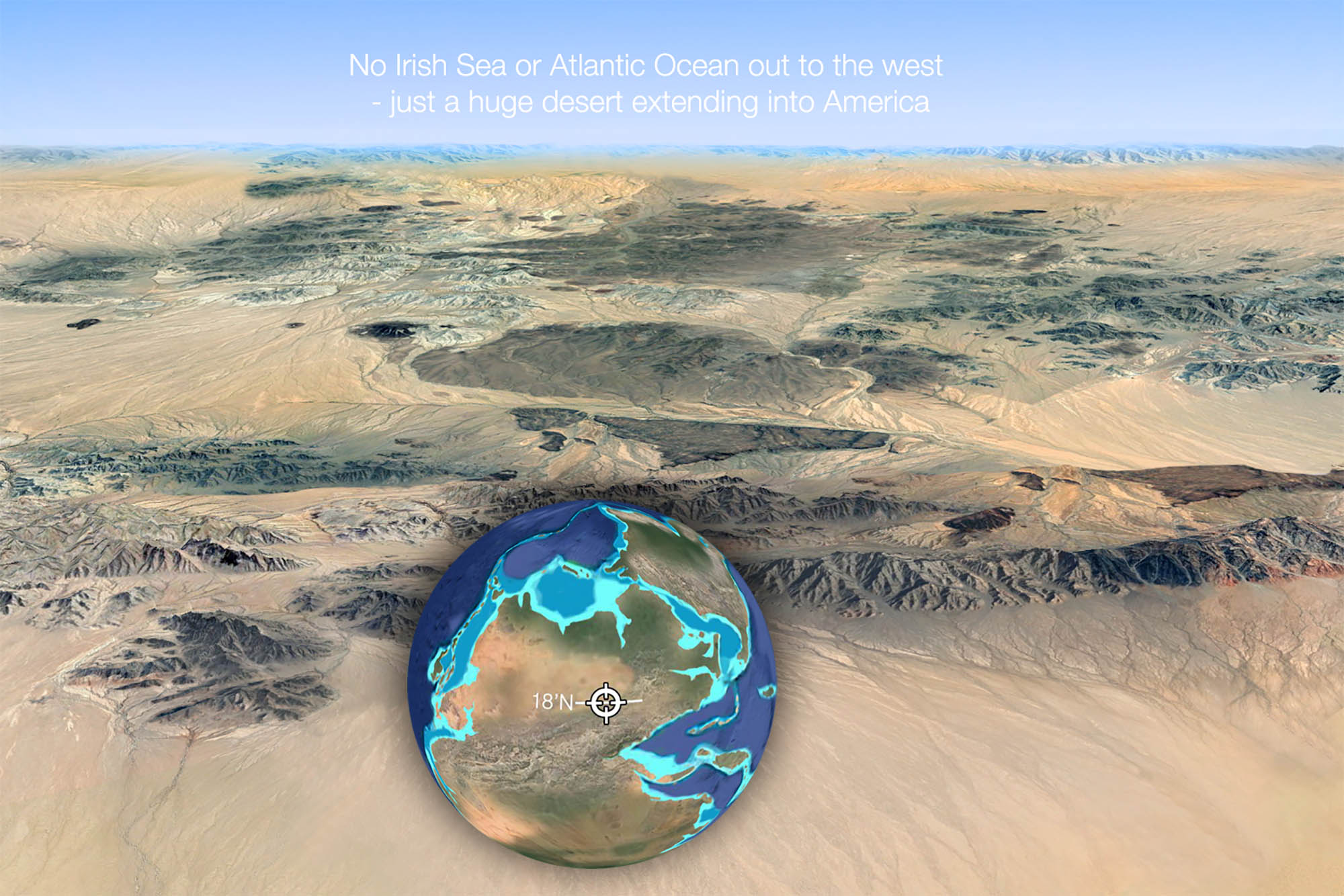 Time of the desert

In the Permian period (around 290 million years ago) almost all the continents of the planet had fused into one supercontinent called Panagea (all lands) and the Dudley area was right in the midst of the supercontinent, just a few degrees north of the equator! The desert sediments possibly covered this area, but were subsequently eroded away.

The sand dunes of the Permian desert can be seen today in the Bridgnorth area. The red sandstones seen around a lot of places in the West Midlands (e.g. Bromsgrove area) are from the Triassic (which follows the Permian) when the sediments were deposited by seasonal rivers with arid conditions, but not such desert extremes as the Permian.

The rocks exposed in the high quarry face are tilted up aat a steep angle what does that tell us about the formation of Wren’s Nest Hill?

The miners left the thinly bedded/ lumpy limestone layers because they contained too much clay and silt, can you remember what these layers are called by geologists?