6 Seven Sisters
Back to map 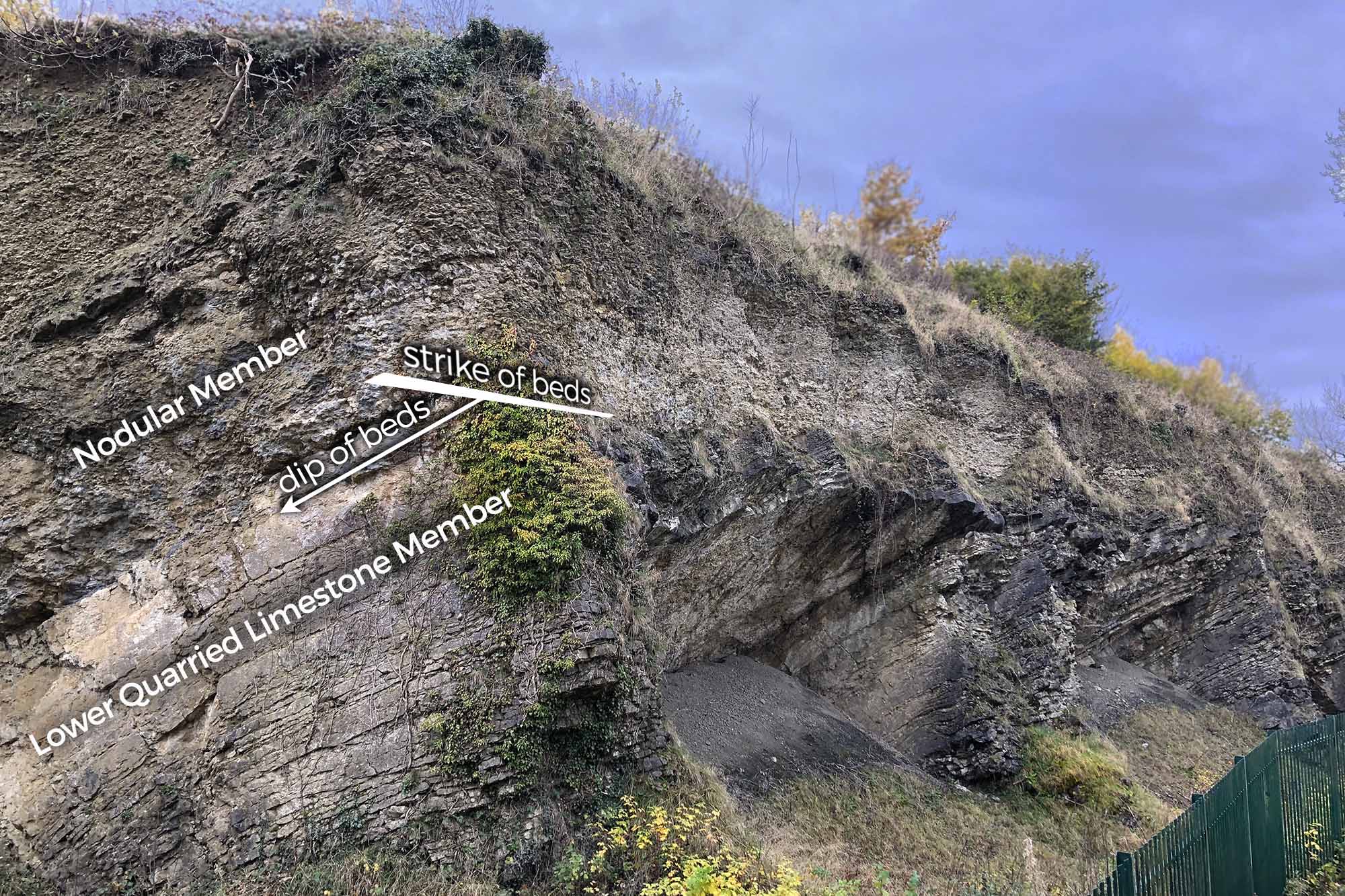 This is the famous Seven Sisters mine entrances where limestone was mined in square areas underground which had a pillar of unworked limestone at each corner supporting the roof. Two of the original seven pillars were removed for safety, so now only ‘five sisters’ remain.

As seen at site 5, the rock beds are dipping steeply westward, with the caverns extending almost 100 metres along the dip of the rock. This exposure of the Lower Quarried Limestone Member is considered the best example in the Wren’s Nest. The entrances have been blocked as the roof, often formed of weak Nodular Member, is at high risk of collapse. Such a collapse would create a so-called crown hole. The Cherry Hole near site 5 is a large crown hole. 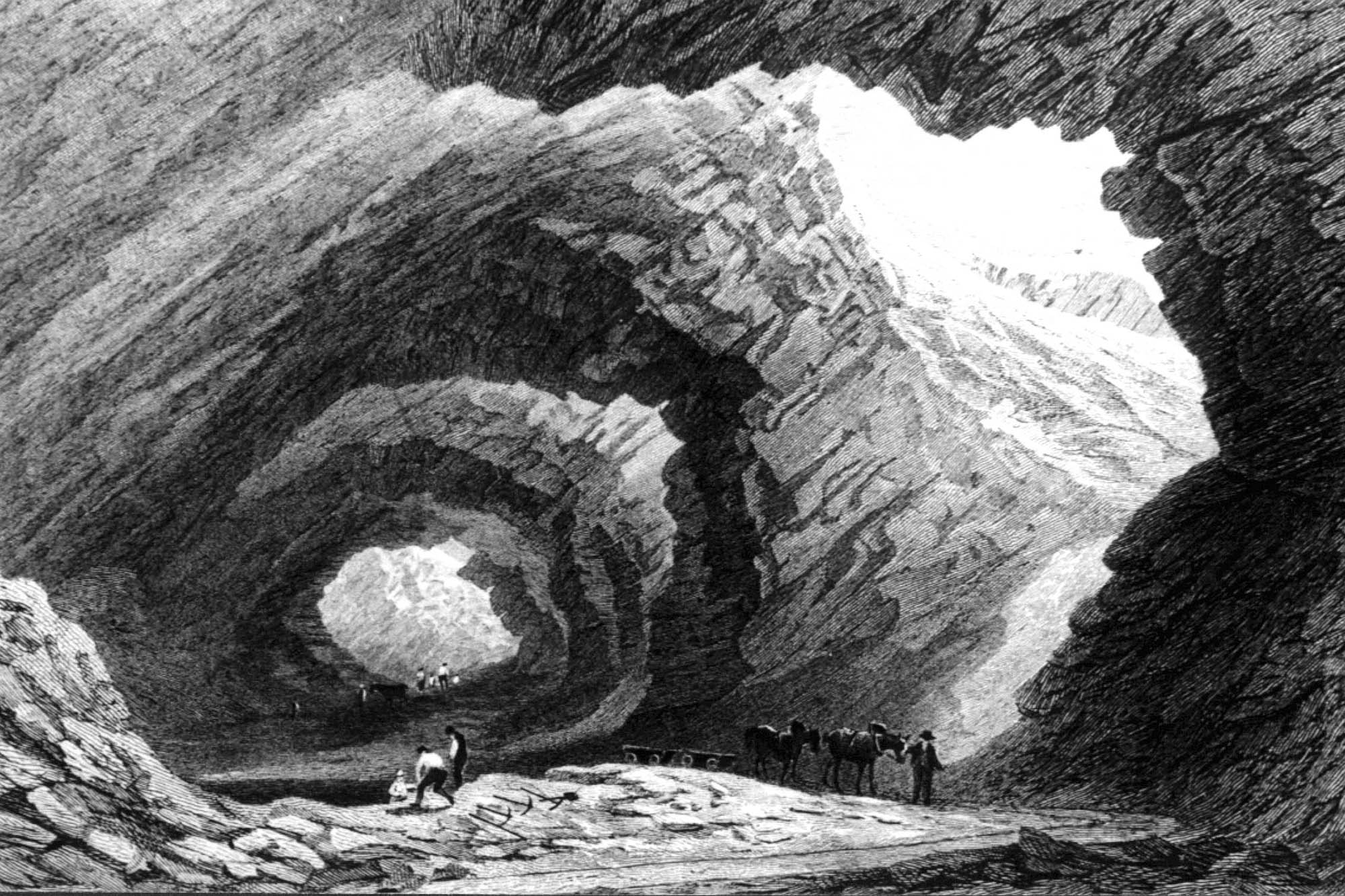 This style of mining is called pillar and room, or pillar and stall mining and left a lot of limestone in place to support the overlying rock and keep the miners safe. In the height of the Industrial Revolution more than 90,000 tonnes of limestone were mined each year in these mines.

Mining would have originally occurred as a simple digging out of the rock face at the surface then followed the limestone layer underground. Where the viewing platform stands would have been a bumpy track or road on which horses and carts would have dragged a few tonnes of stone a time off to customers in the Black Country. As the mines got deeper it would have been harder to haul the limetone to the surface but in 1712 the world’s first steam pumping engine was put to use just a mile away and soon after such steam engines would have been used to help haul carts of stone on rails. 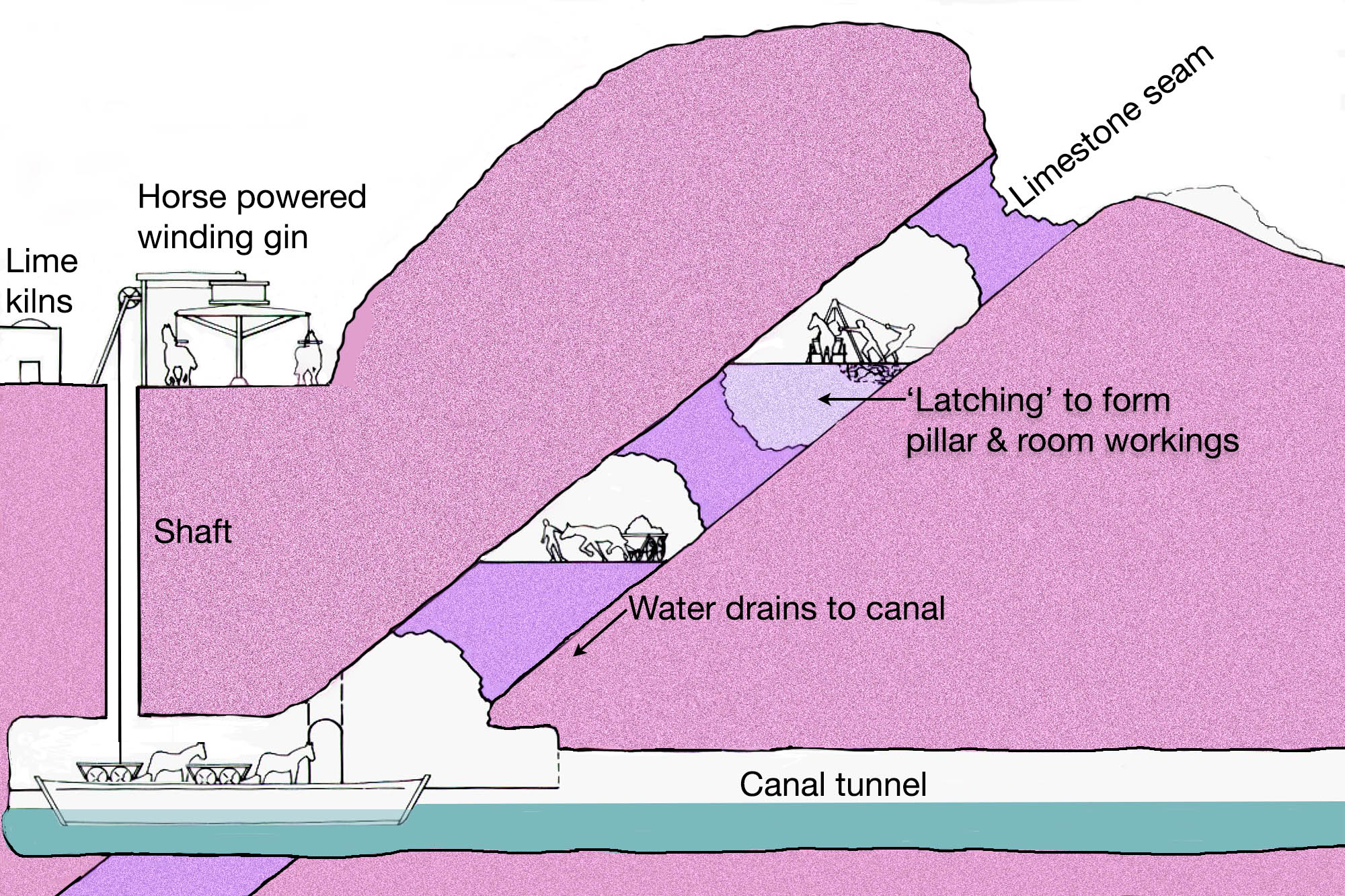 Seventy metres below your feet there is an underground canal and canal basin deep within the mines where loads of limestone were put onto narrowboats and taken to lime works and iron works all over the Black Country and beyond.

By the late 1700’s canals were being constructed using narrow boats that could carry 30-40 tonnes of limestone on a single boat and so the roads were not so useful to haul heavy loads anymore and by 1805 a canal had been dug beneath this mine and limestone was then lowered down to the boats rather than dragged up the slope to the roadway here. The last mine closed on Wren’s Nest in 1927 on the other side of the hill and it brought to an end more than 900 years of limestone mining in the Black Country. 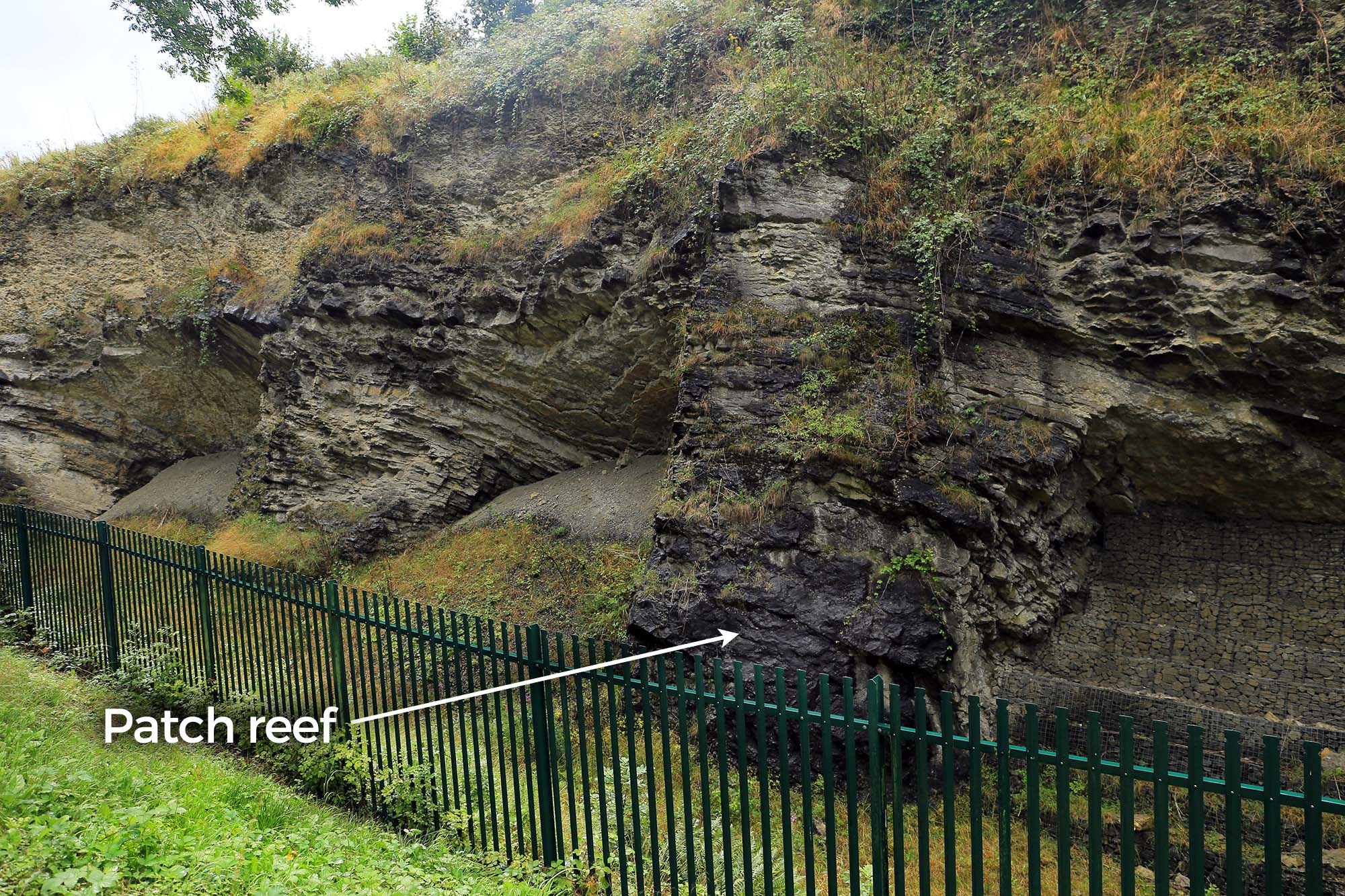 You can see a small ‘patch-reef’ in the middle pillar. Clearly it was a small reef less than 10 m high and not even stretching sidewards as far as the next two pillars of rock. So this is not a continuous coral reef like the Great Barrier reef but more like a lagoon with little reefs living in it at the time. 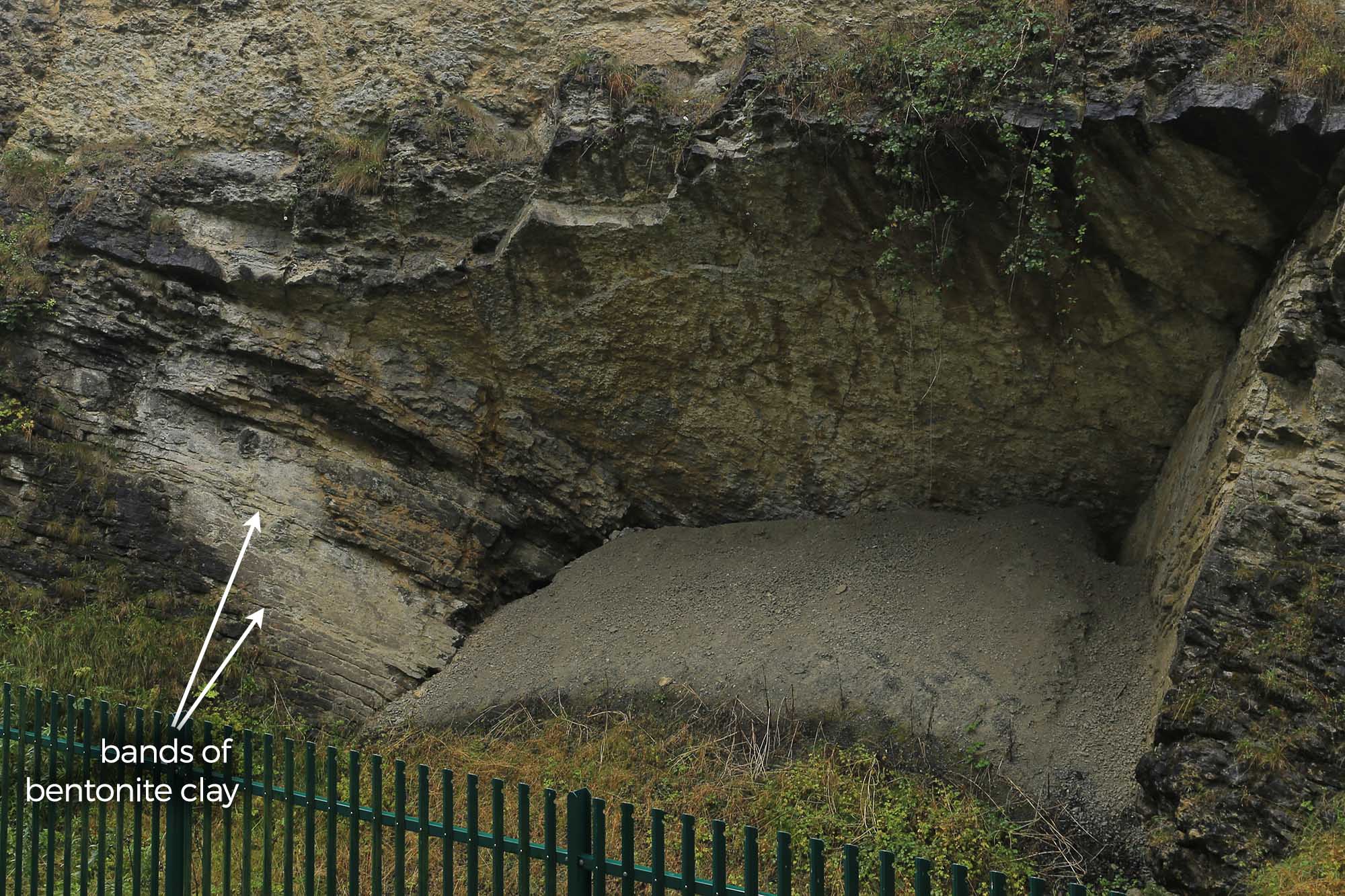 In the some of the pillars bands of yellowish bentonite clay occur. These correspond with ash falls onto the sea bed from violent volcanoes. At the time they occurred they must have disrupted coral development but it subsequently recovered. The bentonite layers are not good for stability of the pillars as it provides a lubricated surface on which the dipping rock beds can slowly slide. 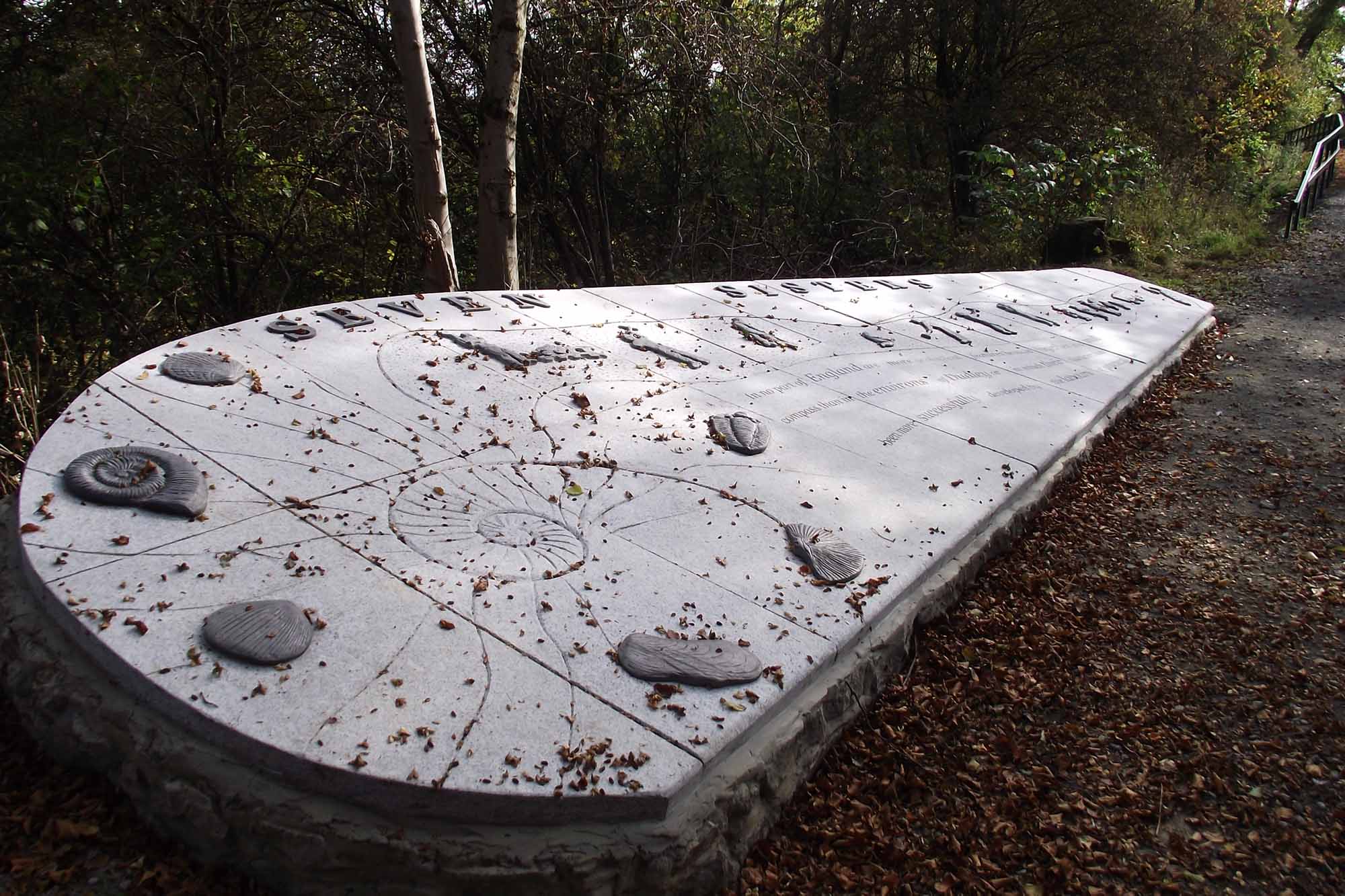 Do Task 6, then move on the short distance to site 7. On the way you will pass this granite sculpture depicting the miners and canal workers who laboured in the darkness below and Murchison’s words to the local geological society in 1841. The sculpture also features the forms of common fossils of the local Silurian rocks.

Murchison’s words on the granite sculpture beside the path just beyond Site 6.

‘In no part of England are more geological features brought together in a small compass than in the environs of Dudley and which their character have been more successfully developed by the labours of practial men.’

Where is the canal from where you are standing at Site 6?

How many tonnes of limestone were mined per year here?

Tough question this one! What is the strike direction of the rocks here?