3 Roots Valley
Back to map 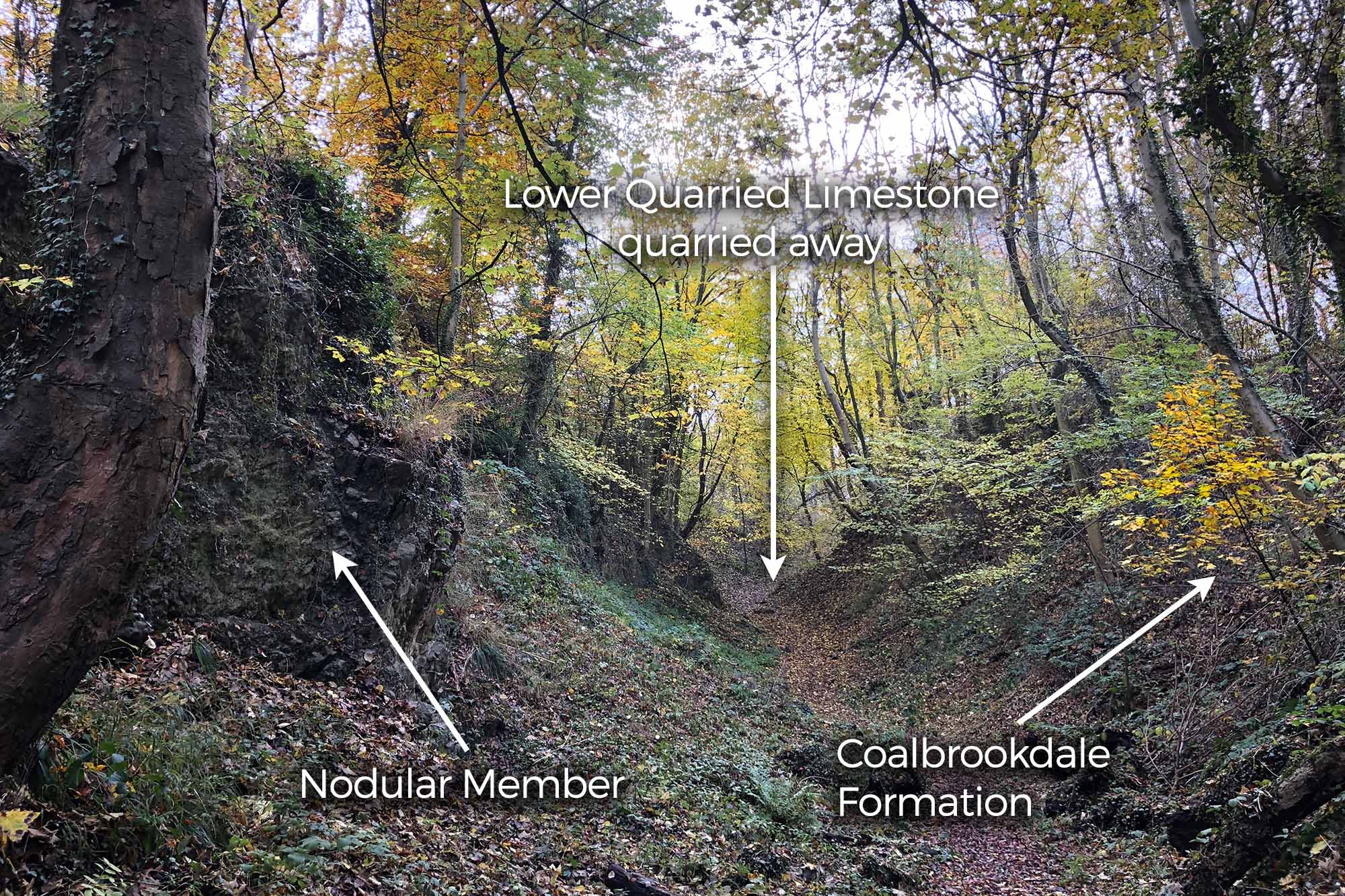 View south along the narrow Roots Valley created by the extraction of the narrow band of Lower Quarried Limestone, leaving behind the unwanted Nodular Member and Coalbrookdale Formation rocks. This quarrying leaves narrow trench like valleys running right around the Wrens Nest. They occur as a pair, Lower and Upper Quarried Limestones, with the beds of Nodular Member left behind. 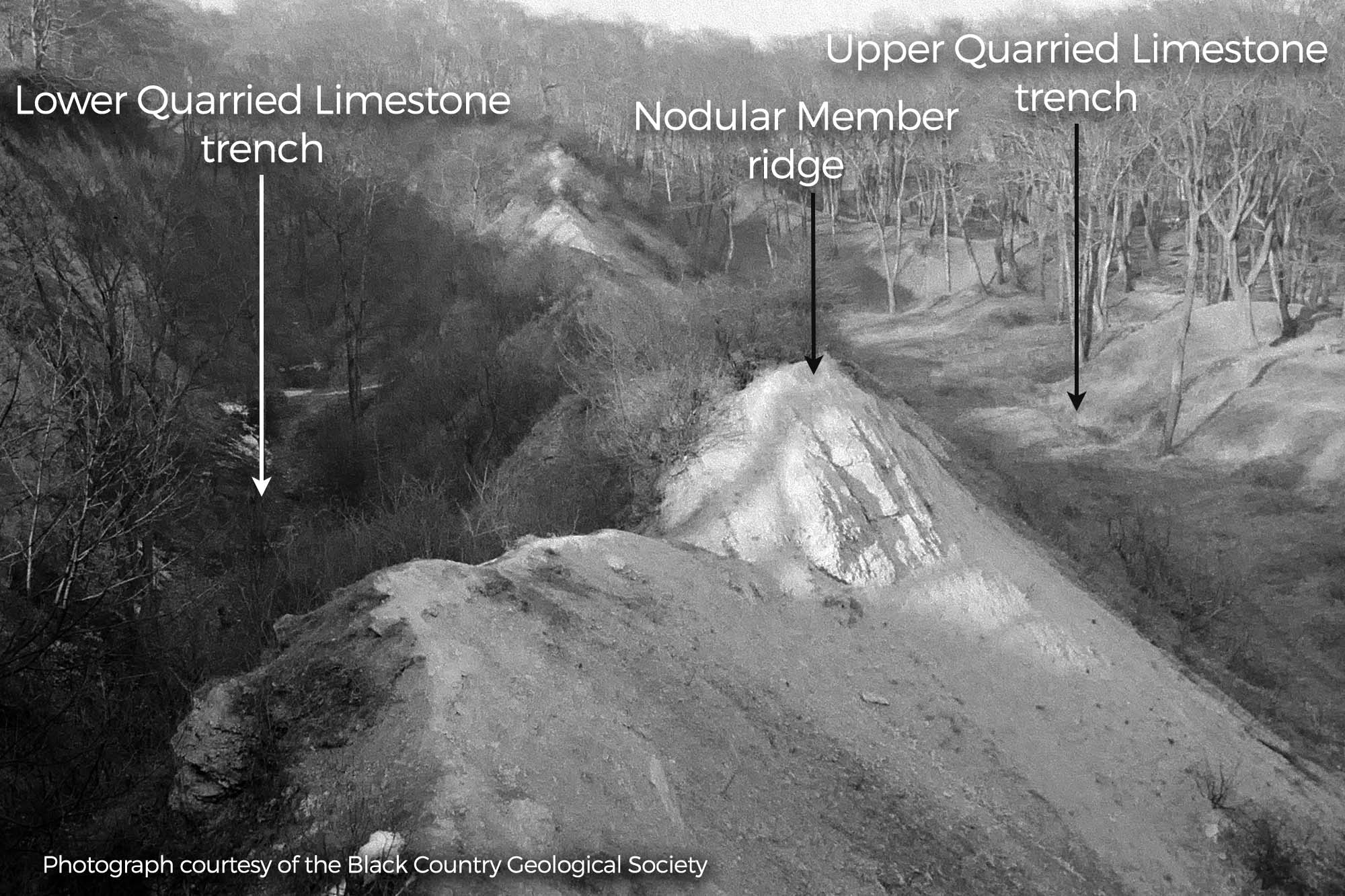 This photo from the 1950’s clearly shows two valleys with a ridge between. The view is to the north and from a location further south than this site.

The photograph is from the Black Country Geological Society Photo Archive.
This contains many fascinating pictures of the area, including ones of the freshly dug NCC trench. – in the Wren’s Nest East section. 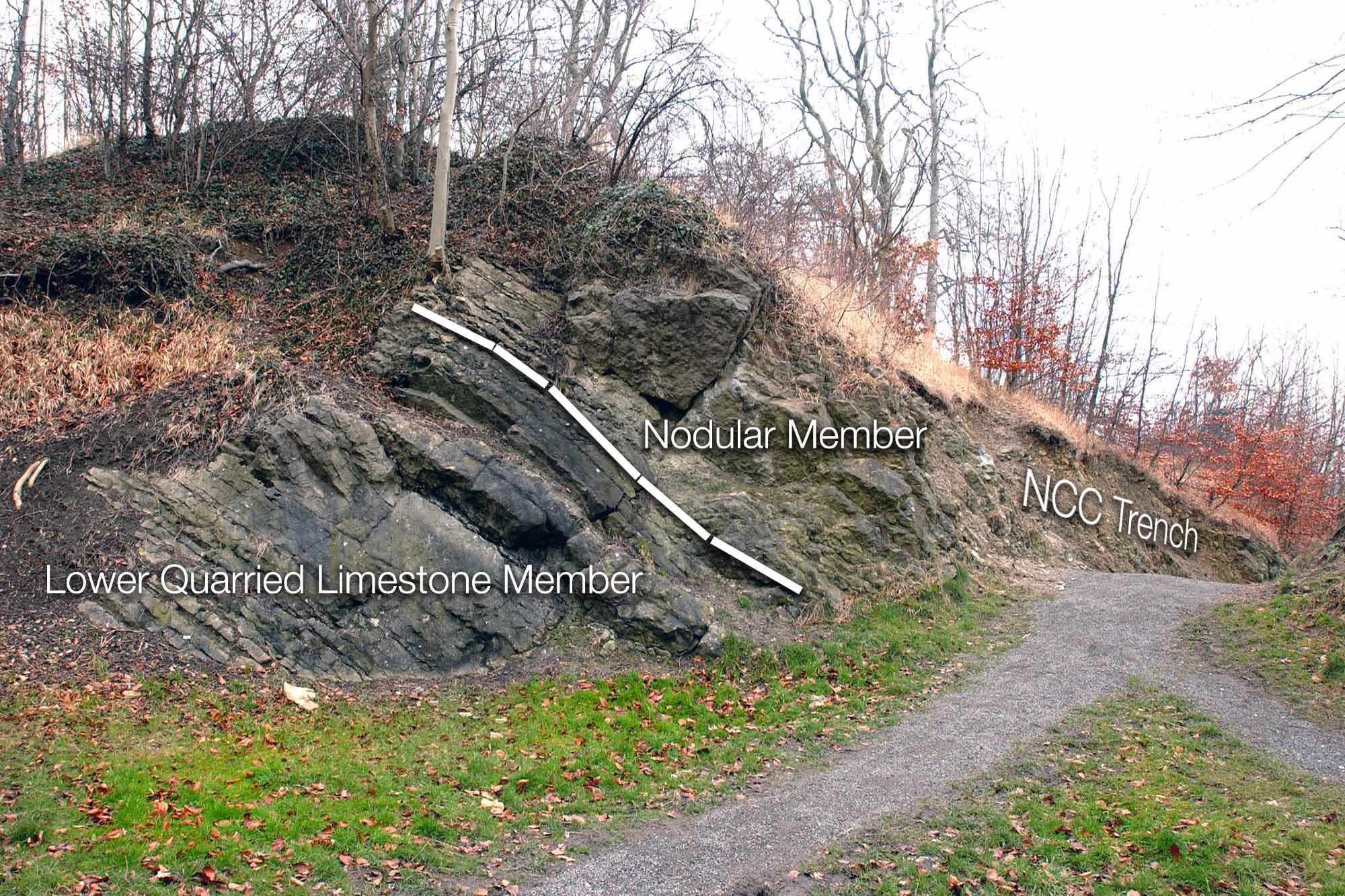 Roots valley follows the outcrop of the Lower Quarried Limestone Member which was used for construction, agriculture and Iron making.

The shell beds are thinner than those seen in the Upper Quarried Limestone at site 1.

The limestone here split into convenient building stone shapes and sizes and was used in constructing buildings like Dudley Castle and Dudley Priory. 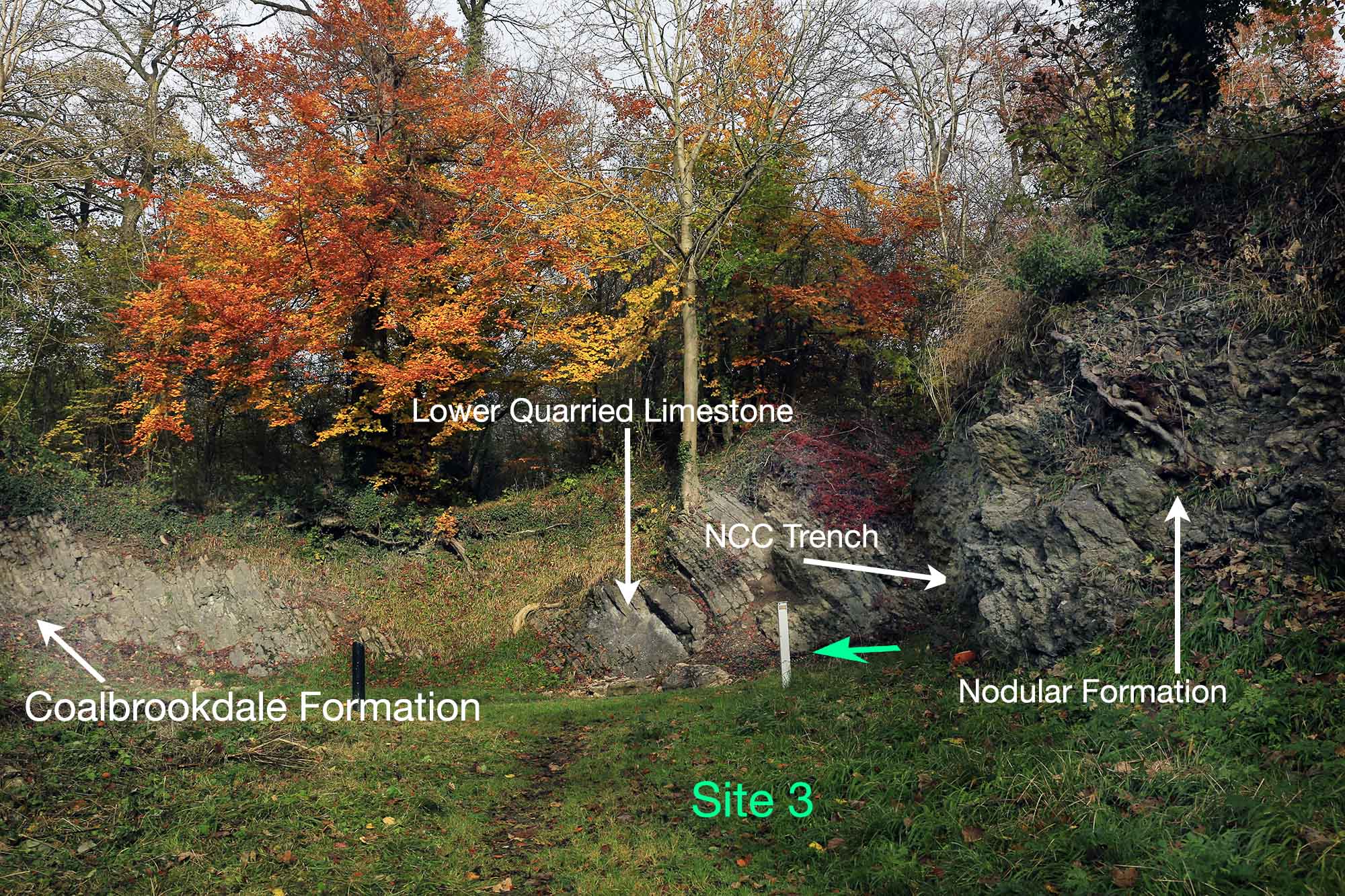 Over in the corner (left side of photo) by the steps are the oldest rock layers to be seen on this trail.\n\nThey are muddy limestones and shales of The Coalbrookdale Formation. These rocks formed in deeper water than the Lower and Upper Quarried Limestones and the Nodular Member. 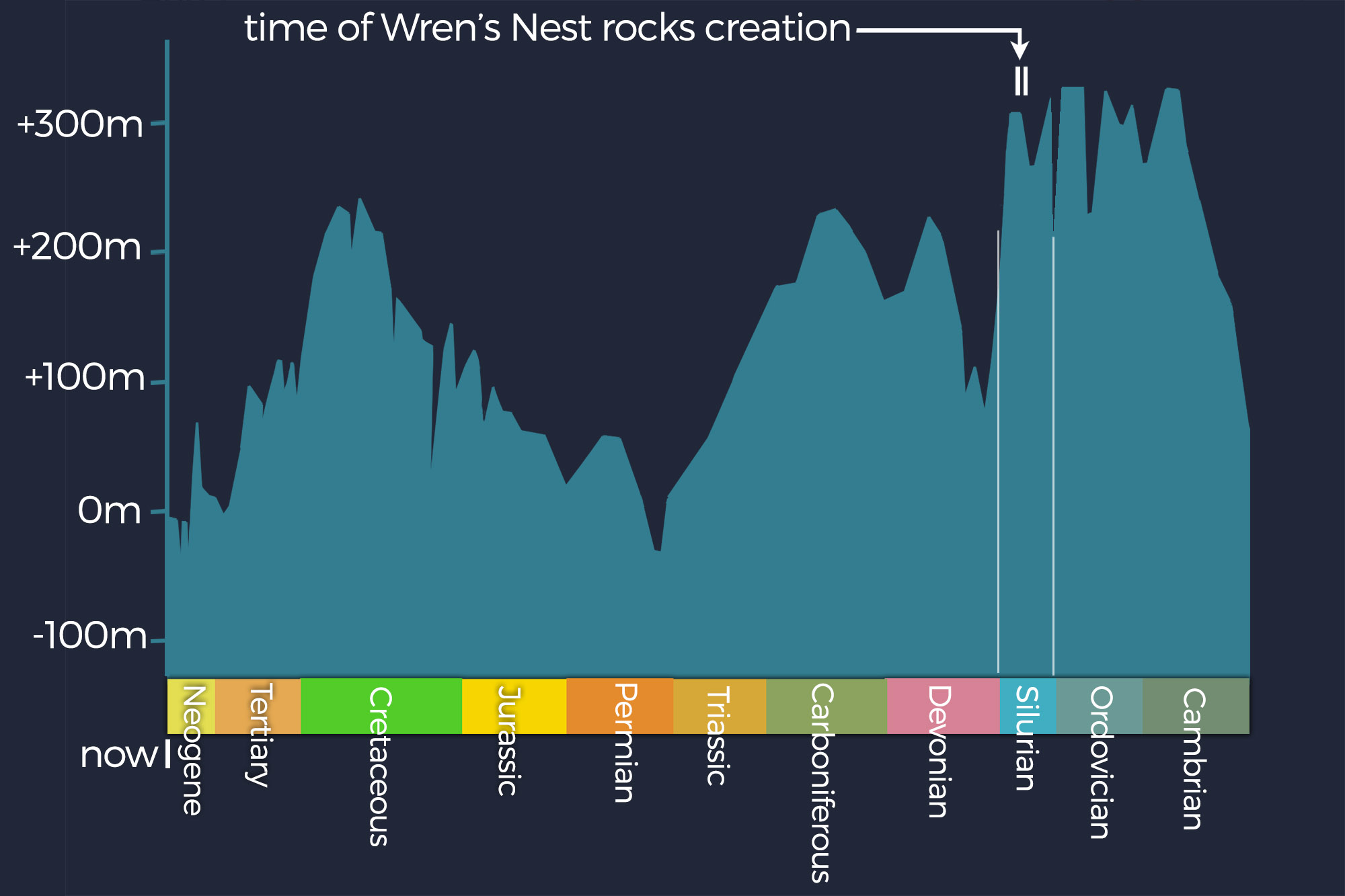 The changes from limey muddy rocks to gritty shelly limestones indicates that the depth of the water changed and different rock types were formed as a result. The graph illustrates the general rise and fall in global sea levels over the past 540 million years. At the time the rocks of the Wren’s Nest were forming sea levels were at a high, perhaps as much as 300 metres above the present level.

2. How much sea water is held in polar ice sheets, glaciers, rivers and lakes.

3. The temperature of sea water, the warmer it is the less dense and so more volume it takes up. 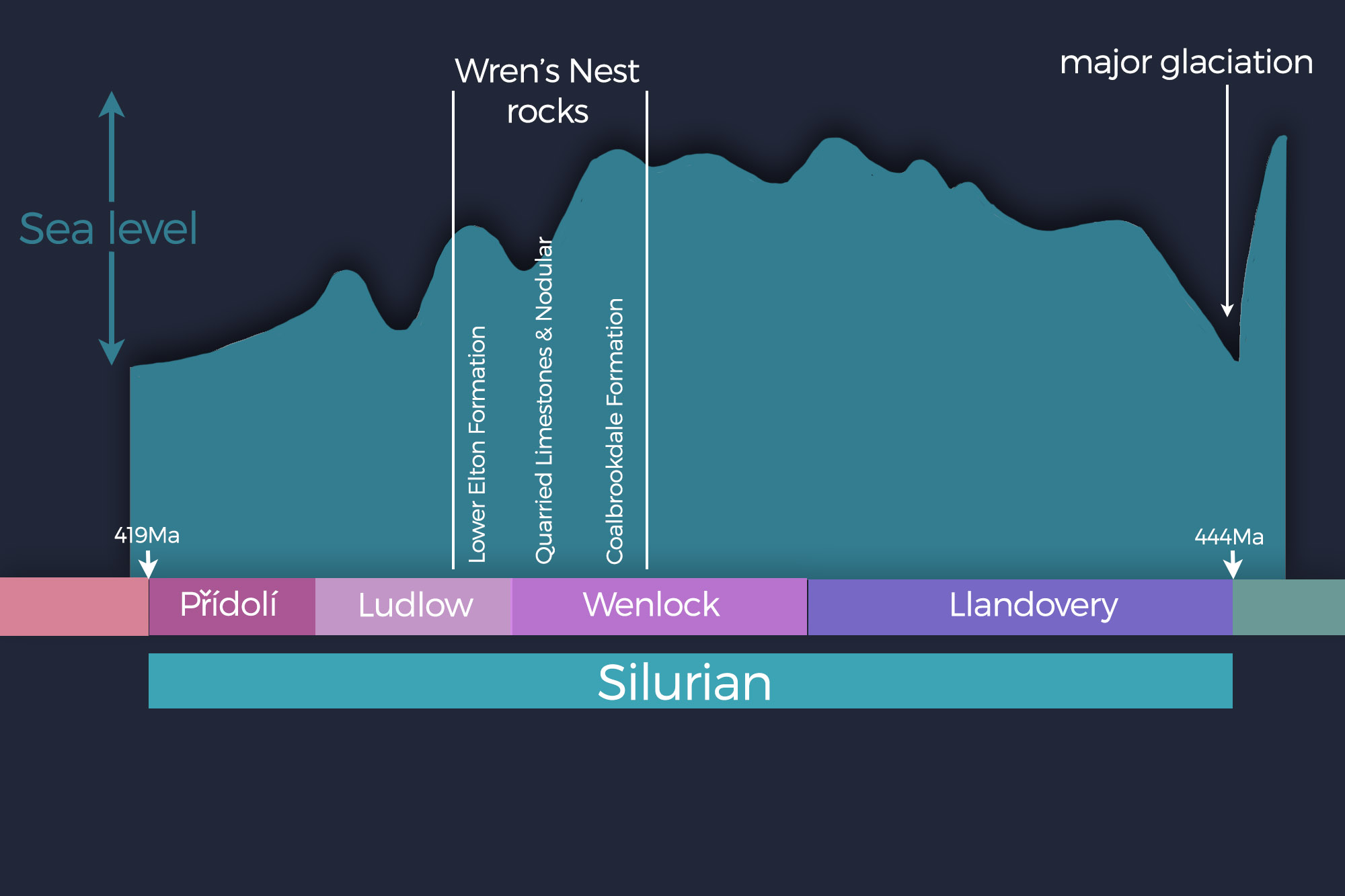 High sea levels in the Silurian

The rocks here and throughout location 1, 2 and 3 link together to show that sea level changed several times between the laying down of the oldest beds – Coalbrookdale Formation layers in the inner part of Wrens Nest Hill through to the youngest beds – Lower Elton Formation on the outer flanks of the hill.

A bentonite layer that is slightly below the level of the steps leading up to the fields in the centre of the hill also occurs in the same strata in Sweden. It was tested and found to be 429.1 million years old. This indicates that the total time represented by the exposed strata of Wren’s Nest Hill is about 1.4 million years.

One possible source for some of the volcanic ash falls in this area, is from evidence for volcanic activity in the Mendip Hills and Bristol area during the Silurian when the rocks of the Wren’s Nest were being deposited. 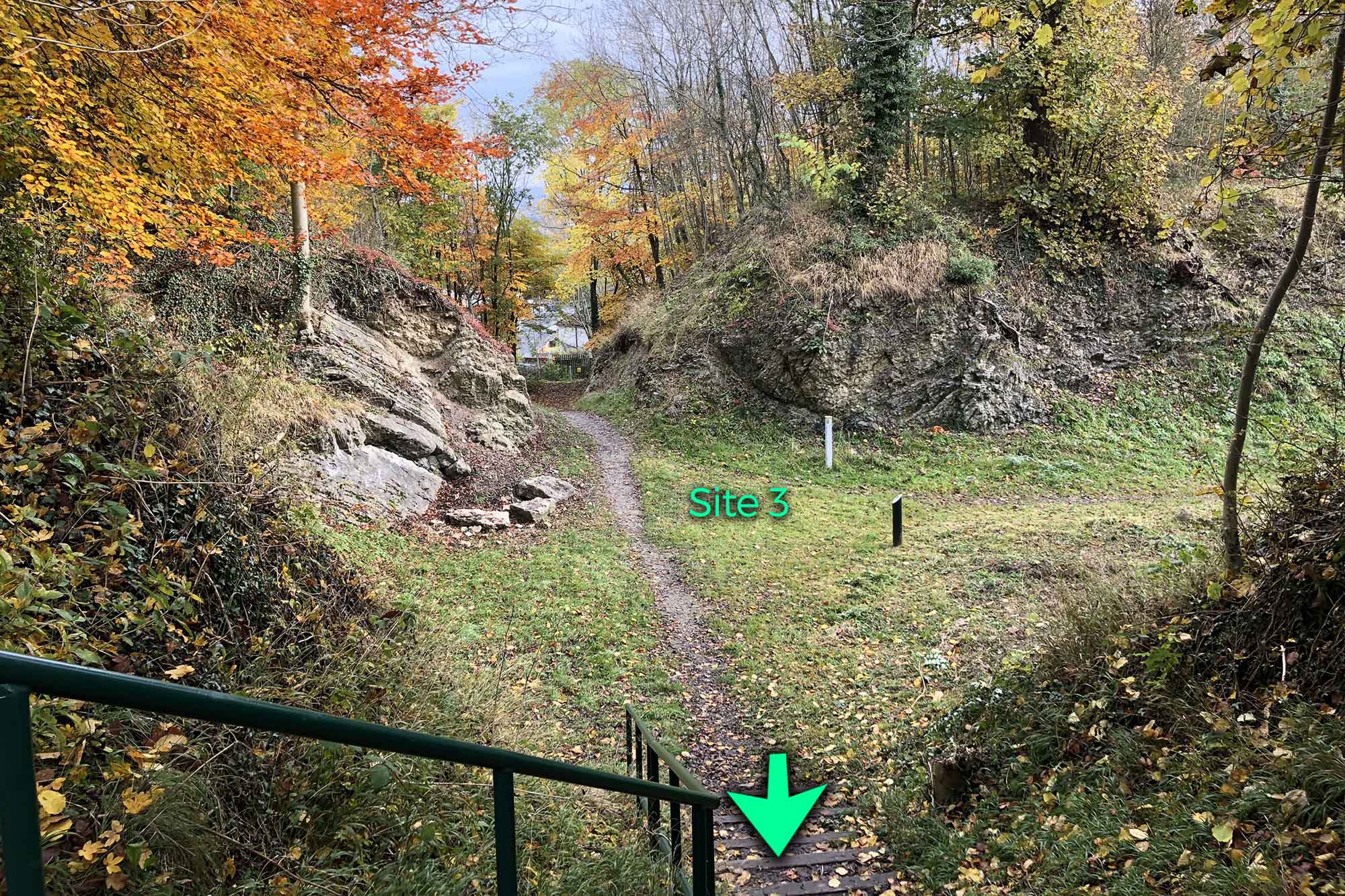 Do Task 3, then walk up the steps and turn left onto the path.

The path runs over the beds of the Coalbrookdale Formation – the oldest rocks of the Wren’s Nest. 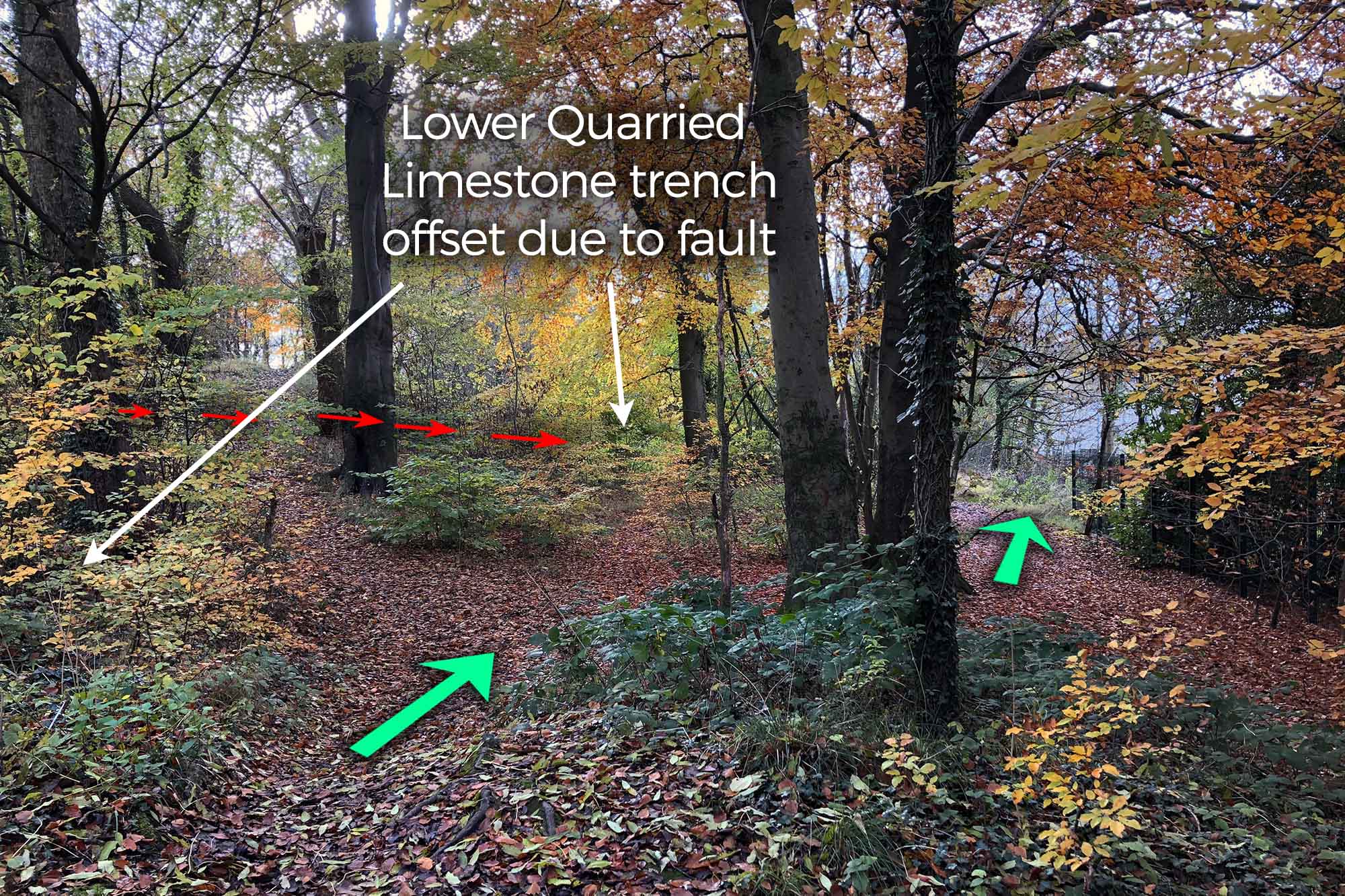 Towards Site 4 – passing over a fault on the way

Take the path out of the woods – beside the fence of Wenlock School – to the open flat area of the centre of Wren’s Nest Hill.

You cross a small fault (fracture line in the rocks) about here – locate it on the map. The map shows how the line of the Lower Quarried Limestone and the other rocks have been displaced to the west on the southern side of the line of the fault.

If you look around in the woods here, you should be able to find where the valley formed by quarrying ‘jumps’ to follow the displacement of the Lower Quarried Limestone. Faults are shown on geology maps as crisp lines, in the ground they are often a zone of crushed rock along which movement has taken place. The tick mark on the fault line indicates on which side of the fault the rocks have moved downwards relative to the rocks on the other side. The movement on a fault can involve horizontal movement as well – hundreds of kilometres for big faults like the one in the Great Glen of Scotland.

Global sea levels are effected by?

Which type of rock is likely to be formed in deep water?