2 NCC Cutting
Back to map 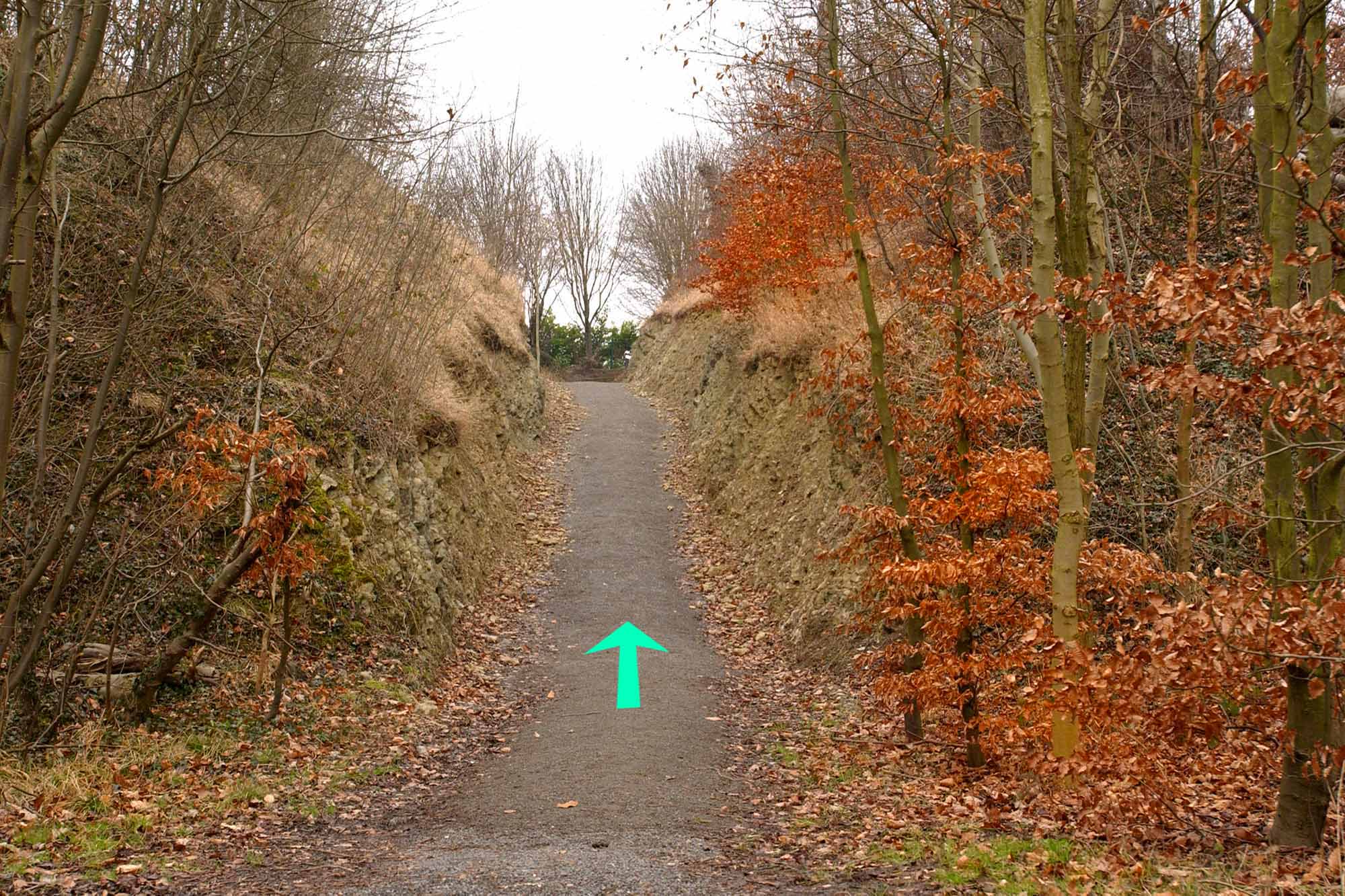 This long shallow cutting was created in 1977 by the Nature Conservancy Council (NCC) to provide a view of all of the rock beds (the beds of the Nodular Member) in order between the Upper and Lower Quarried limestone beds. It allows a fantastic section of the layering and nodular nature of the sequence to be examined. Here you can recognise that different rock types are present, hard limestones, softer mudstones and a small lumpy reef mound in the centre of the cutting. There are also some white or yellowish soft bentonite clay/ash layers which were formed by occasional volcanic eruptions as these rock layers were forming. 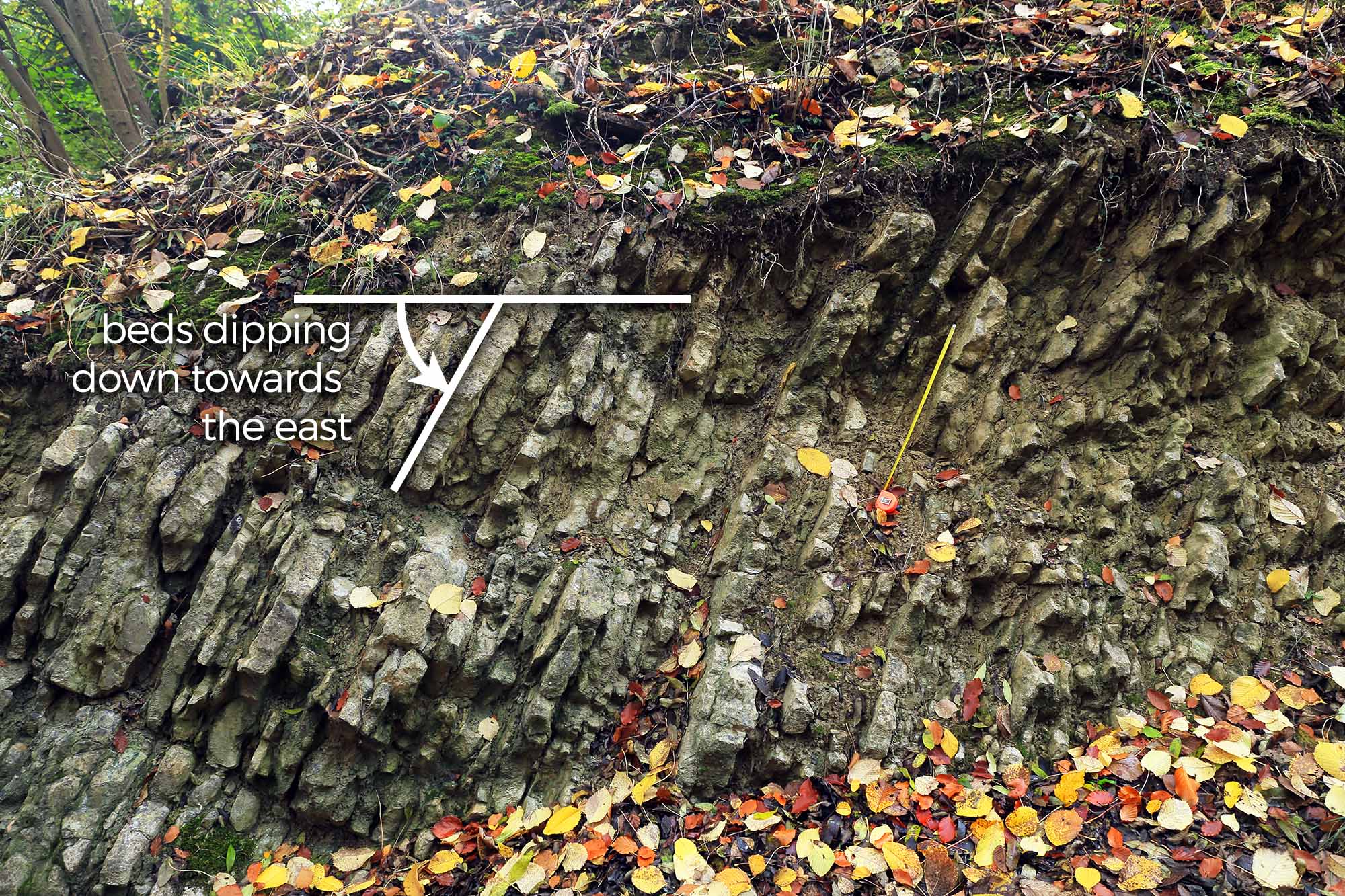 This shallow trench is cut into the hillside and rises up the side of the hill. Rock layers are exposed on either side. The rock layers are clearly dipping into the ground towards the east (towards the City of Birmingham). The beds going towards the centre of the hill are lower in the rock pile and are therefore older, having formed first. 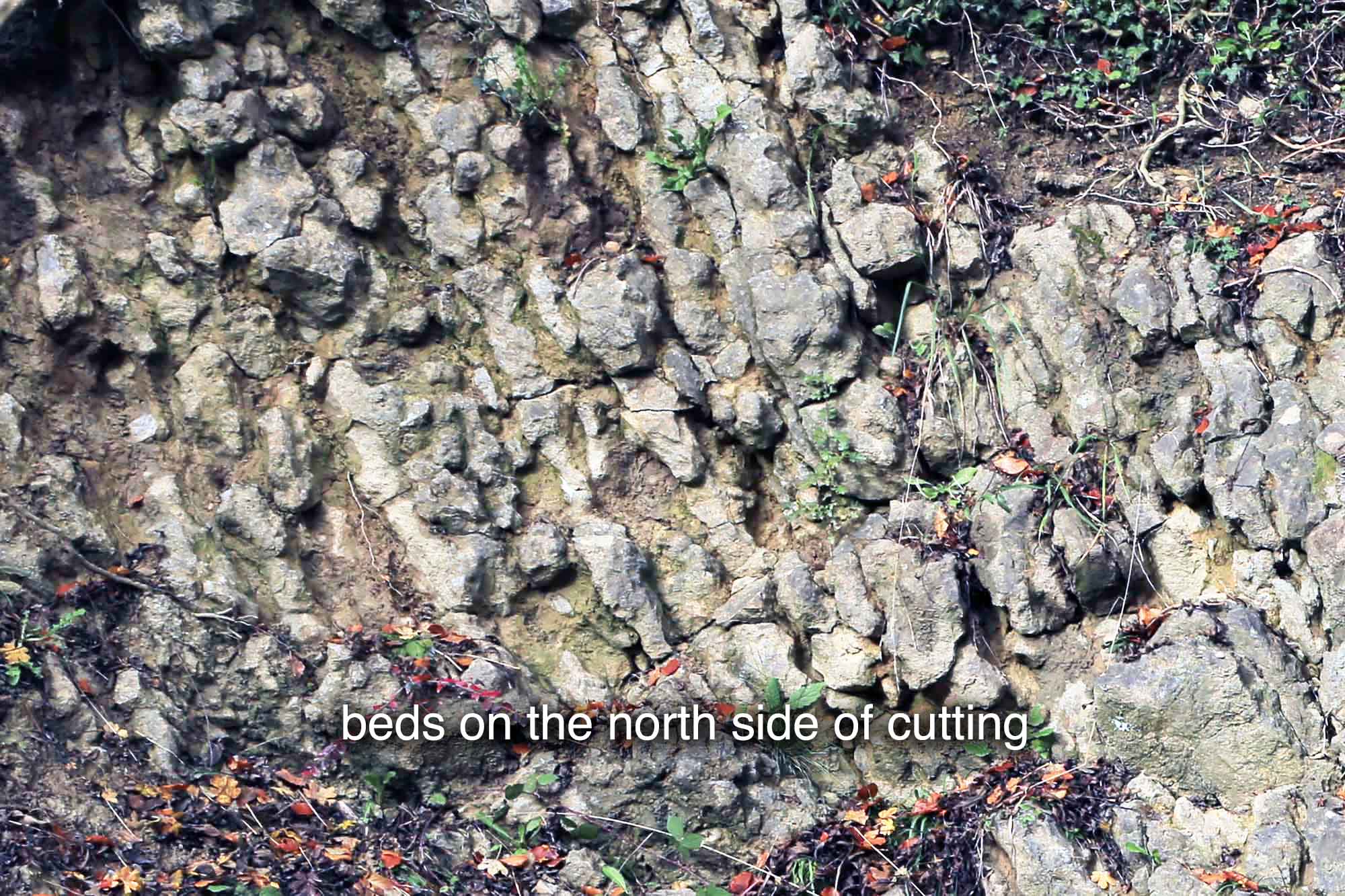 Rocks at the start of the cutting

There are many differences to be seen. Most obvious is the fact that the rock beds at the start of this trench are rather soft and muddy. When we compare these layers to those forming on seabeds today, we generally find that muddy layers form in deeper quiet waters below where wave action can stir them up. This implies these layers formed in deeper water than the shelly limestones seen at locality 1 (Snake Pit). 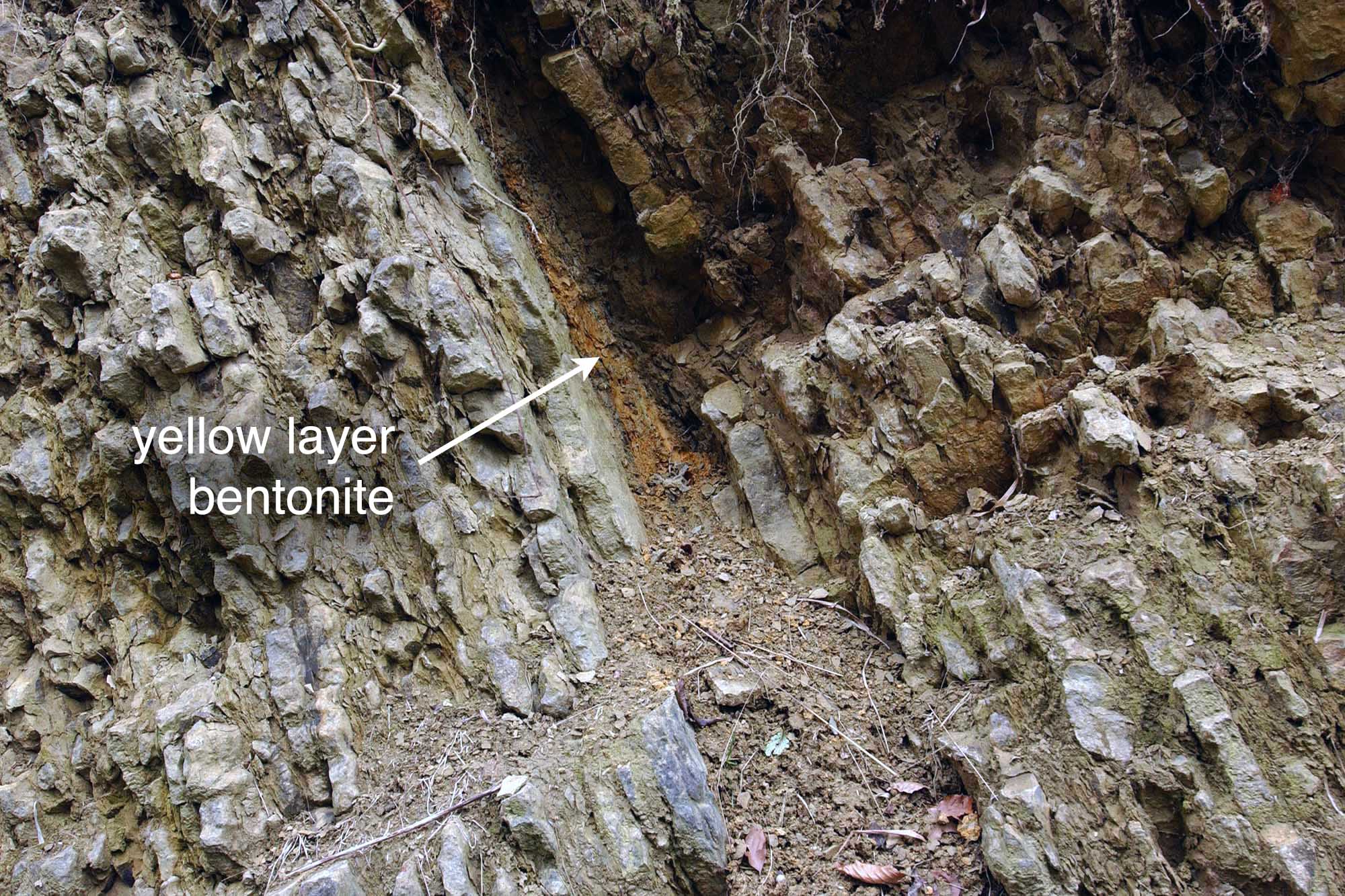 About 10 metres along the trench (right – north side) is an obvious thick yellowish clay layer that is cut back into the trench side as a deep groove. This is one of many bentonite clay layers that were once volcanic ashes that fell into the sea from an erupting volcano nearby, smothering the seabed and eventually rotting down to become the clay layer we see today. 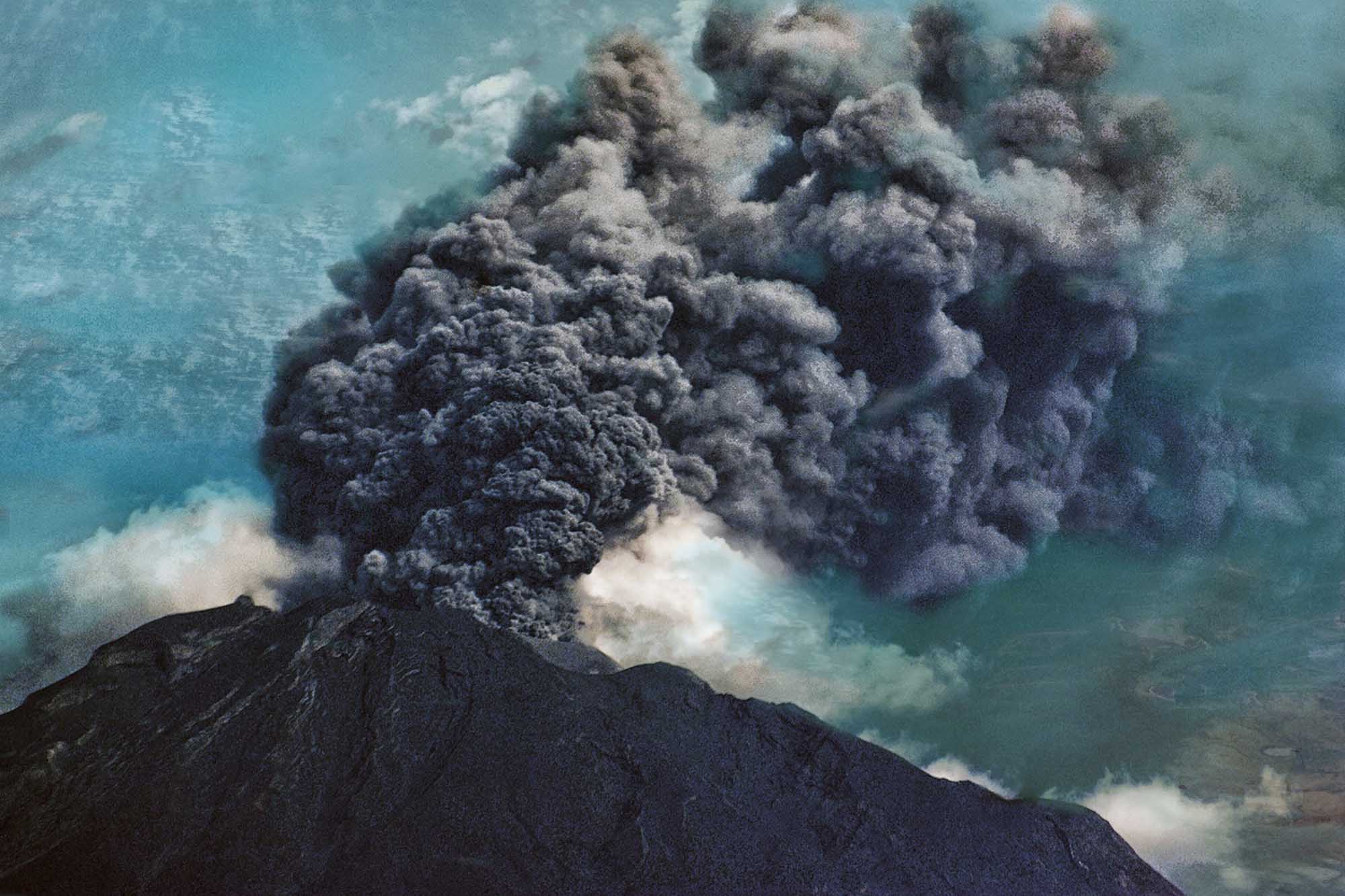 When you look closely along the rock layers you can see a number of thin notches where beds of soft white/yellow clays (bentonites) have been worn away. These were formed from ash exploded out by volcanoes that existed because two plates were colliding and one was being pushed down into the Earth under the other and melting. The molten rock rose to the surface and created explosive volcanoes that were somewhere offshore at the time.The bentonite shown here is on the left – north – side of the trench about 10 metres in.

Ash from these eruptions fell into the limestone seas and smothered the seabed. These layers slowly broke down to become the clays that we see here today, but they still retain harder, more resistant crystals from the original ash. In particular Zircon and a mineral called Apatite are often found in the ashes.

As you walk up this trench you are going back in time, through layers that were deeper down in the rock pile and therefore older. 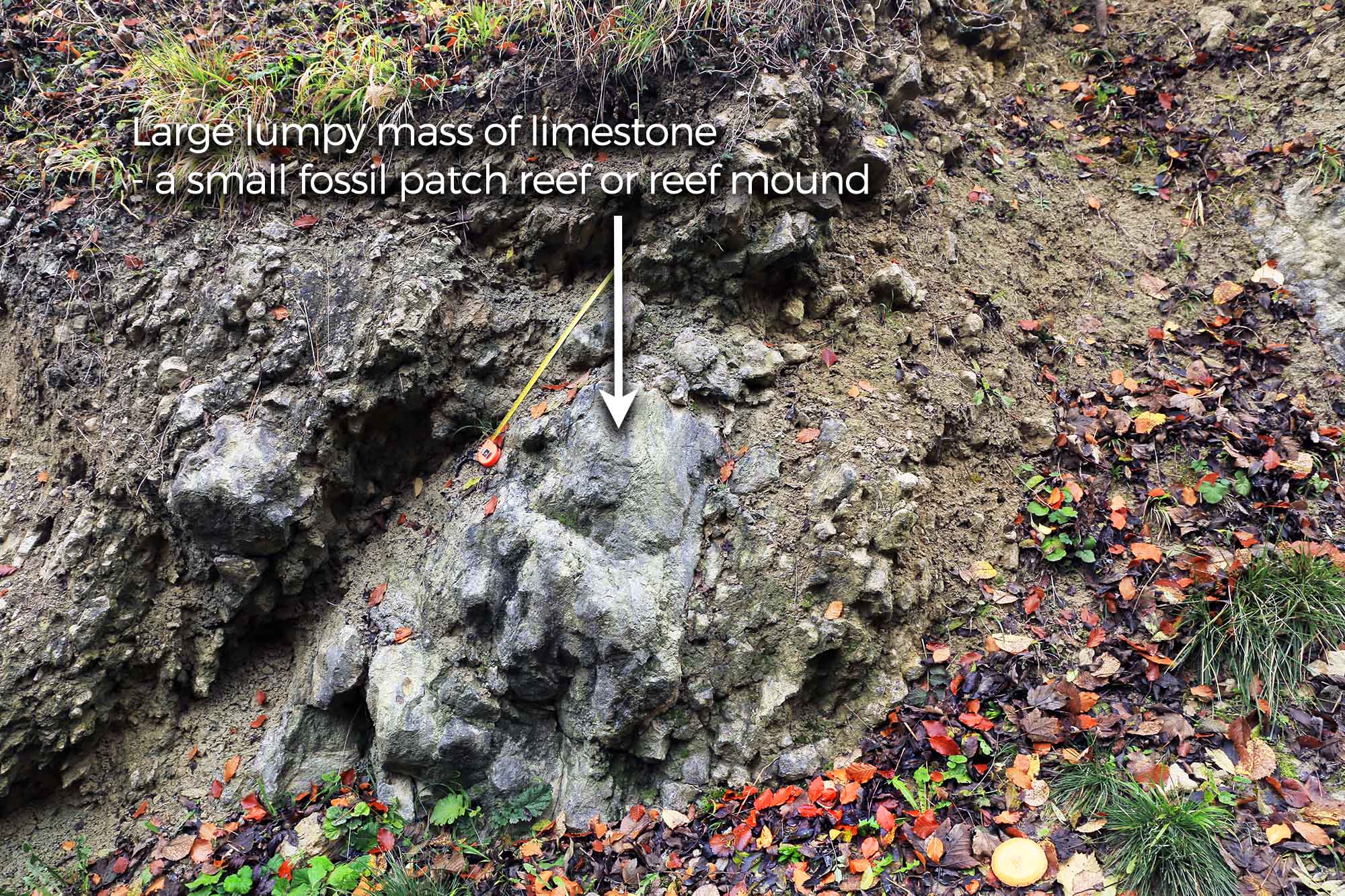 Towards the centre of the trench (on the left – south side – about 7.5 metres beyond the bentonite layer) there is an obvious large lumpy mass of limestone. This is a small fossil patch reef or reef mound. Geologists call these bioherms. This is a very small one and its irregular shape is clearly seen by comparing either side of the trench where it occurs.

Hard stony coral reefs of today are created by coral animals that need to be in warm, clear, shallow water that the sun can shine though to where they are growing. This suggests that at this layer the water levels were quite shallow. 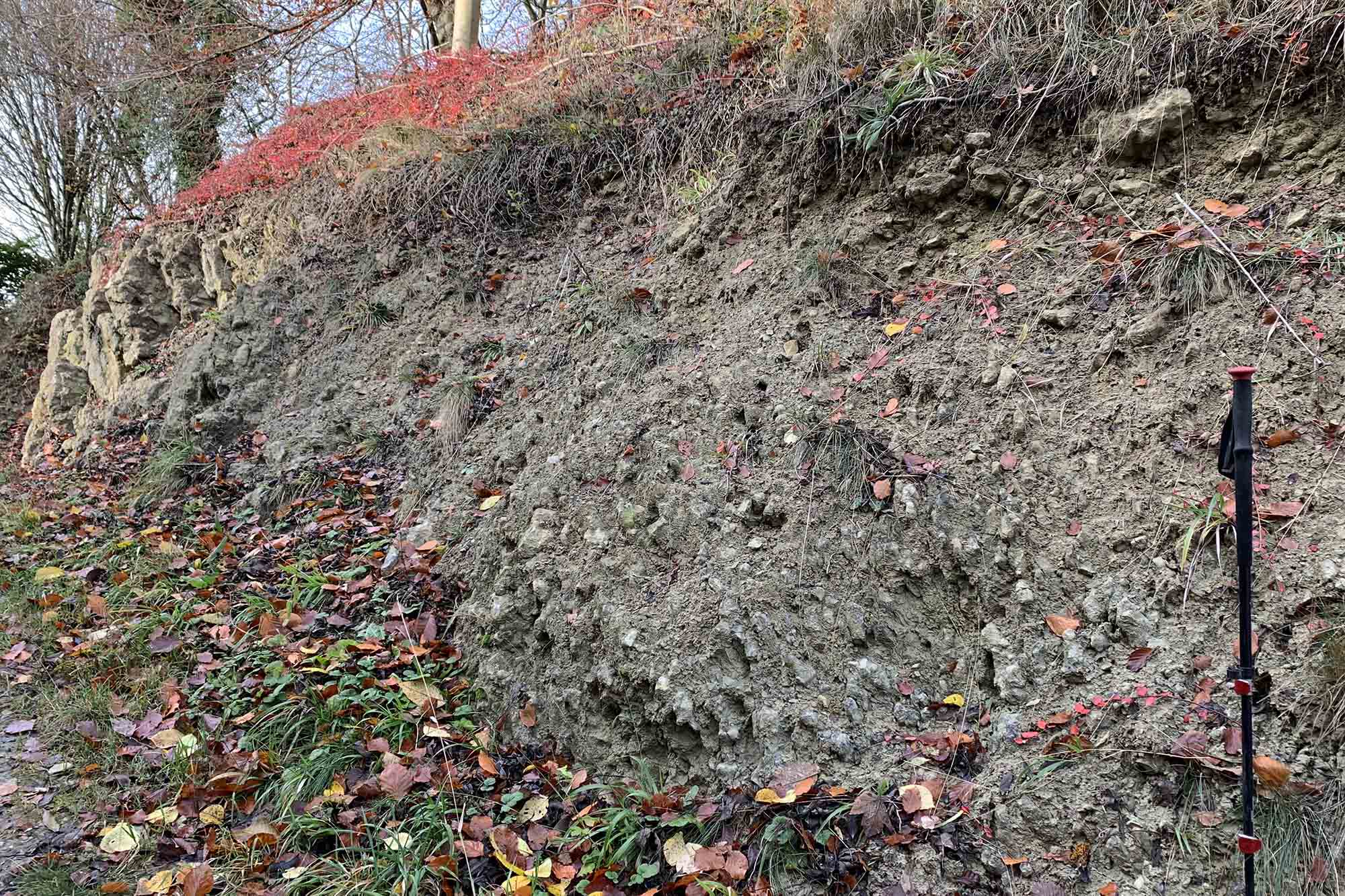 Top of the cutting

When you reach the top part of the cutting, the rock beds on both sides are dominated by muddy rocks – mudstones. This indicates these sediments were deposited in deeper water than the depth present when the patch reef formed. Reefs form in shallow sunlit waters, with little muddy sediment washing around. 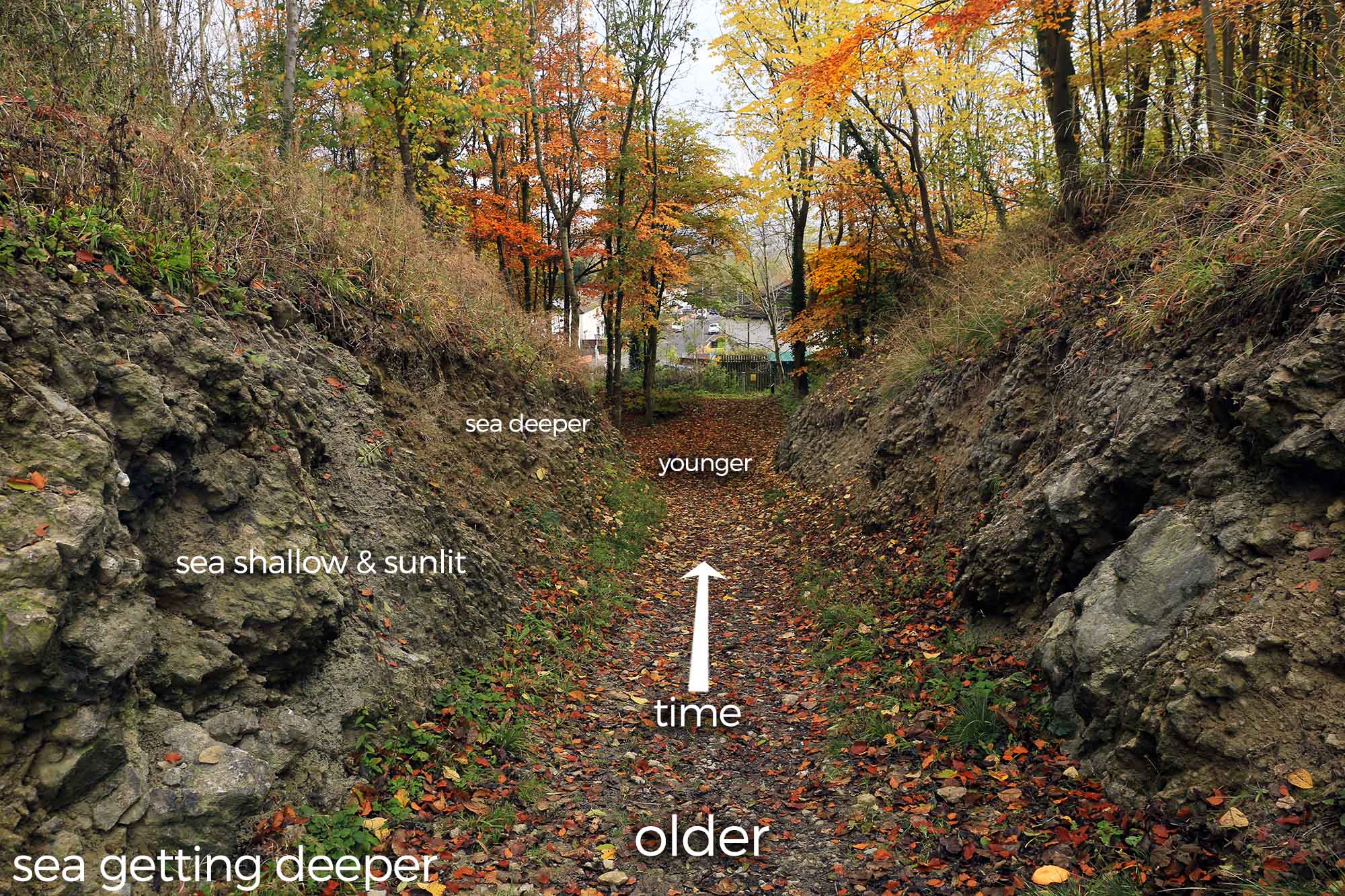 The view down the trench – with the rocks becoming younger towards the start of the trench. If you walk back down the trench from here you will walk through 1.3 million years of Earth history, beginning with a deepish sea, that shallows allowing patch reefs to form, then deepens again.

Can we say a certain thickness of rock corresponds with so many years?
No, as a given bed may take many thousands of years to form, whilst another of equal thickness forms quickly, for example, the bentonite could have been deposited in minutes by a volcanic eruption. Also you cannot be sure that all time is represented. A bed could be deposited, only to be swept away, then replaced by another later deposition, so we end up missing a slice of the history. 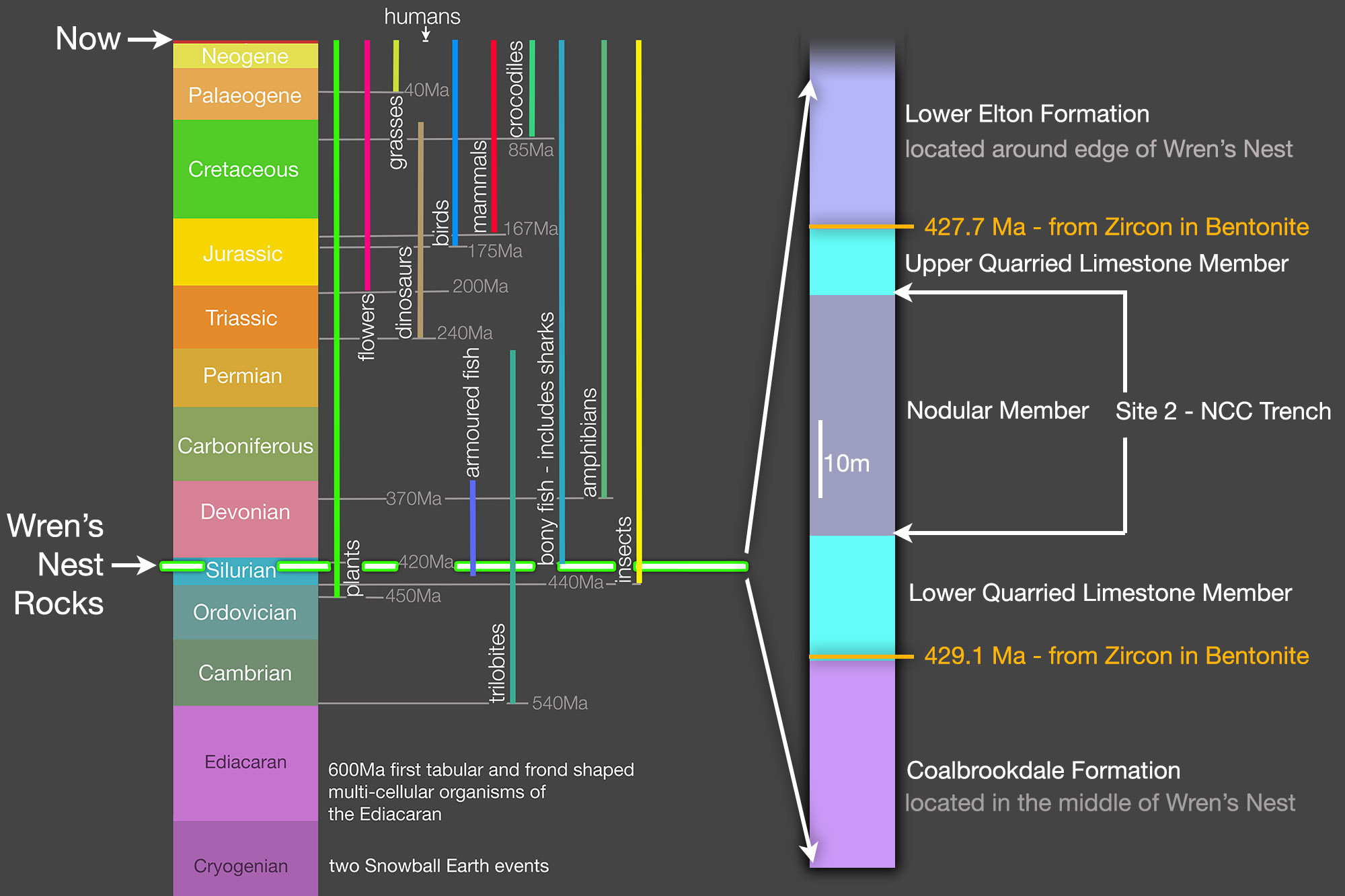 Time of the Wren’s Nest rocks

On the right side of the diagram, the Silurian rocks forming the Wren’s Nest are shown in order (oldest at bottom). The height of the column for each rock type represents the typical thickness of that rock in the Wren’s Nest area, not a timescale. Note, what lifeforms were around, or not, at the time the Wren’s Nest rocks formed. The period of existence of us humans is too tiny to show to scale on a diagram like this!

When naming rock strata (stratigraphy), geologists name a group of rocks beds that form a distinct set, based on rock type and appearance, a FORMATION. If a group of beds within a formation has some very distinct features it will be called a MEMBER. Occasionally an individual bed may be named as a BED. Formations in turn belong to a GROUP and a number of groups may form a SUPERGROUP.

The odd names rocks are given, for example the Lower Elton Formation, are based on place names (sometimes just a hamlet, quarry or hill) where the rock in question is well exposed and that site is then taken as the best representative exposure against which others are compared. 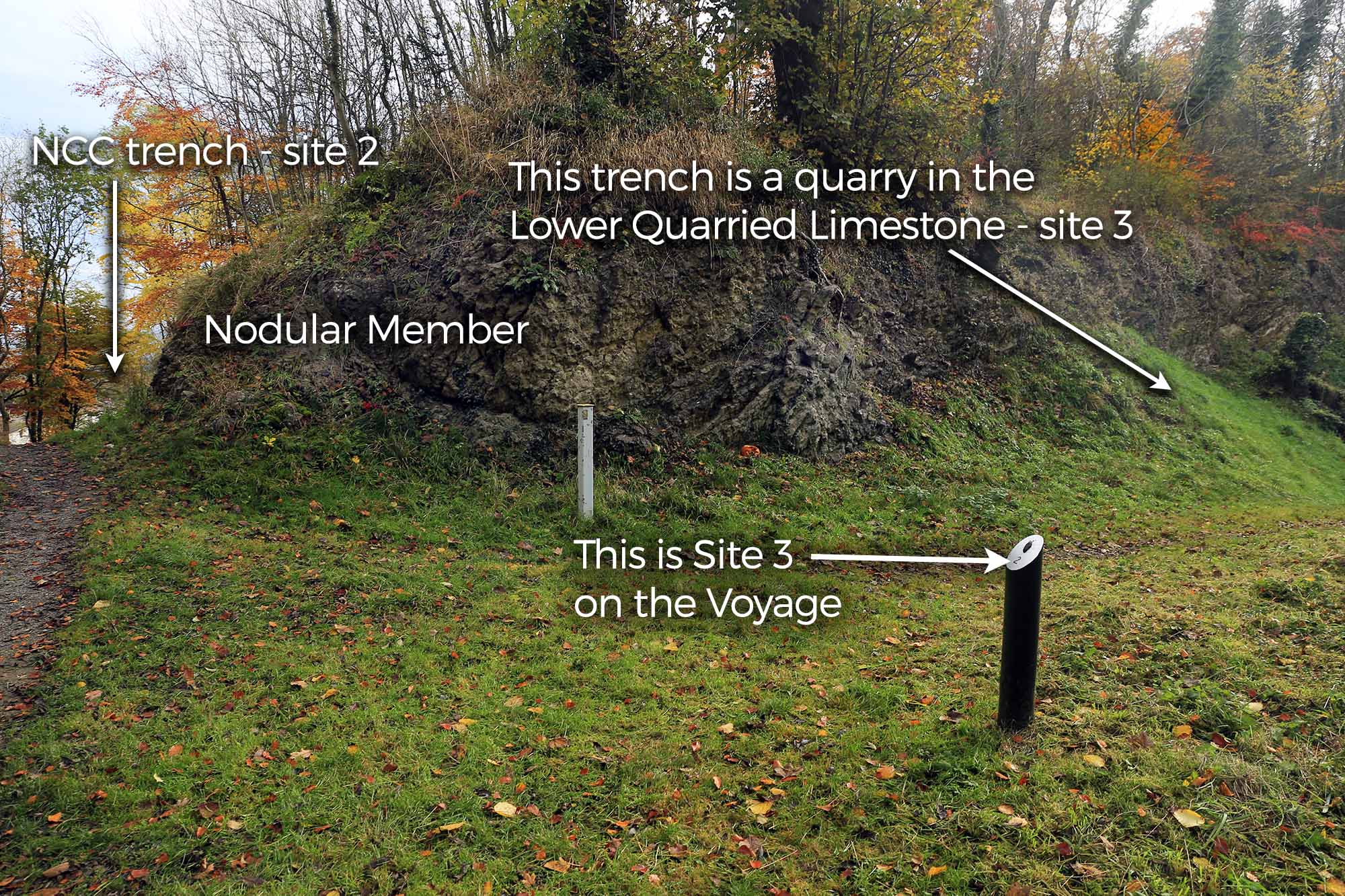 Finally, at the bottom or innermost part of this trench the excavation opens up into a large valley running at 90 degrees (right angles) to the trench and the rock layers are clearly beds of hard grey shelly limestone. This is the quarry of the Lower Quarried Limestone that extends along its outcrop on this side of the hill as a deep excavated valley that locals call Roots Valley.

What is the name of the rock sequence seen in this trench?

Radiometric dating of crystals within the volcanic clay layers within the highest (youngest) beds of this section gave what age to the rocks at that point?

What is the name geologists give to the volcanic clay layers?