11 Gashes and Burrows
Back to map 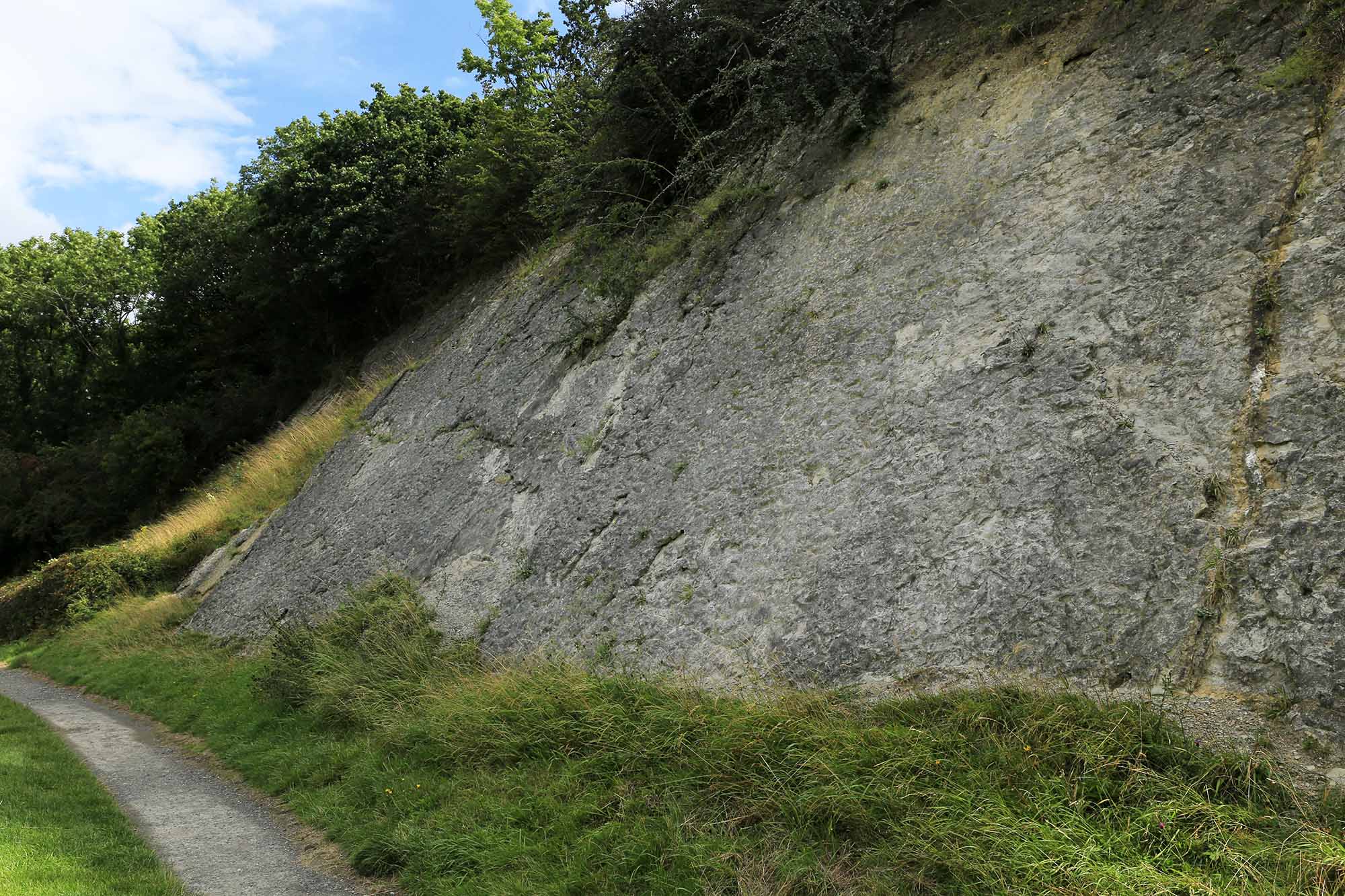 The rock faces here contain structures that were formed as the limestones of the hill were squeezed upwards by earth movements at the end of the Silurian Period. 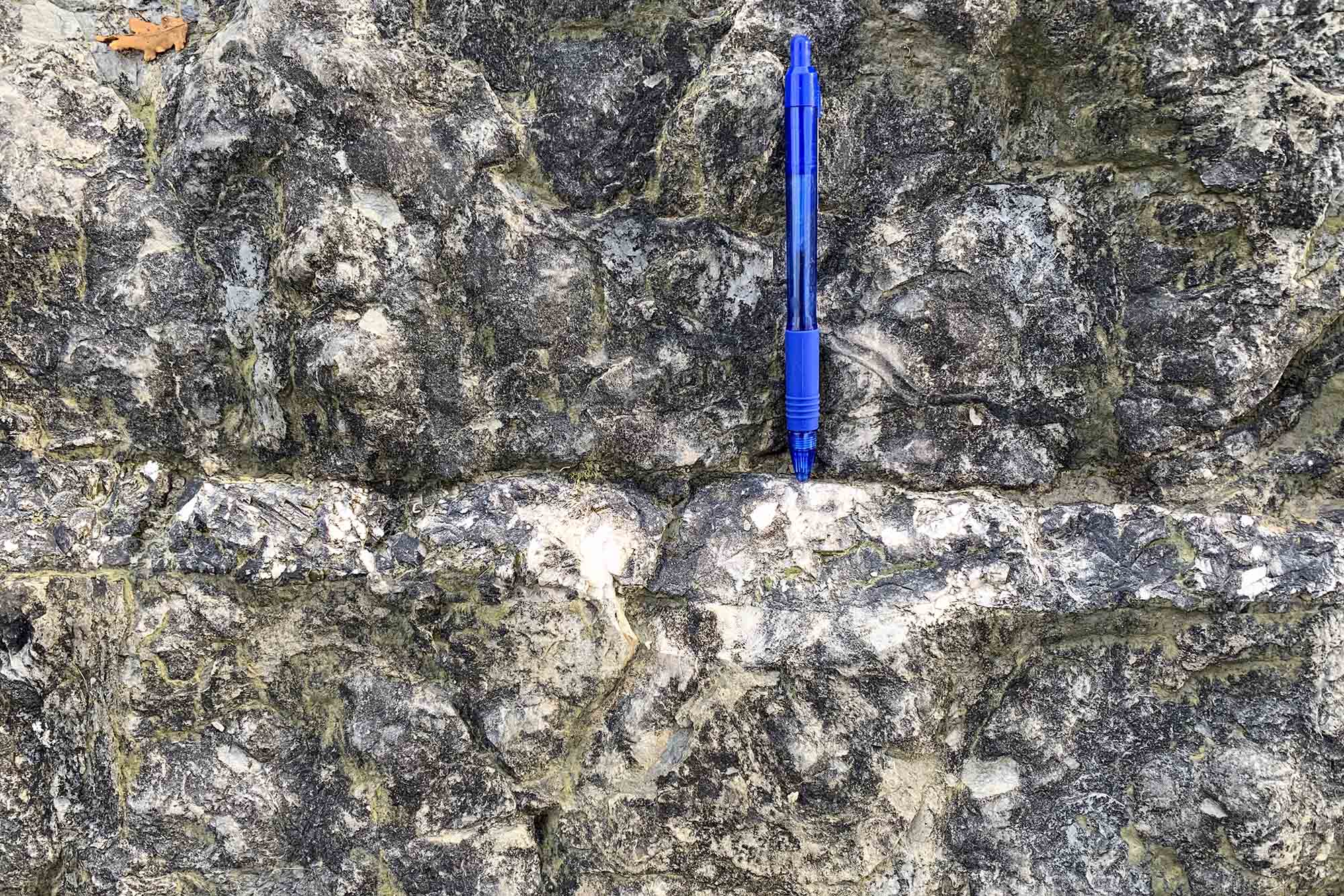 If you look at the rockfaces next to the footpath you can see a number of horizontal long thin lens shaped cracks in the layers that contain the sparkling white mineral calcite. These make take some effort to spot as the surface of the calcite is often darkened by the growth of lichen on the surface.

The long thin lenses of crystalline white calcite were once open cracks. Over time lime dissolved in water seeps into the open crack and deposits pure calcite which grows slowly and fills the gap. This probably happened deep within the earth as the surface as it is today is the result of millions of years of ongoing uplift and erosion that have washed away many layers of rocks that were once on top of this area to reveal these older rocks. 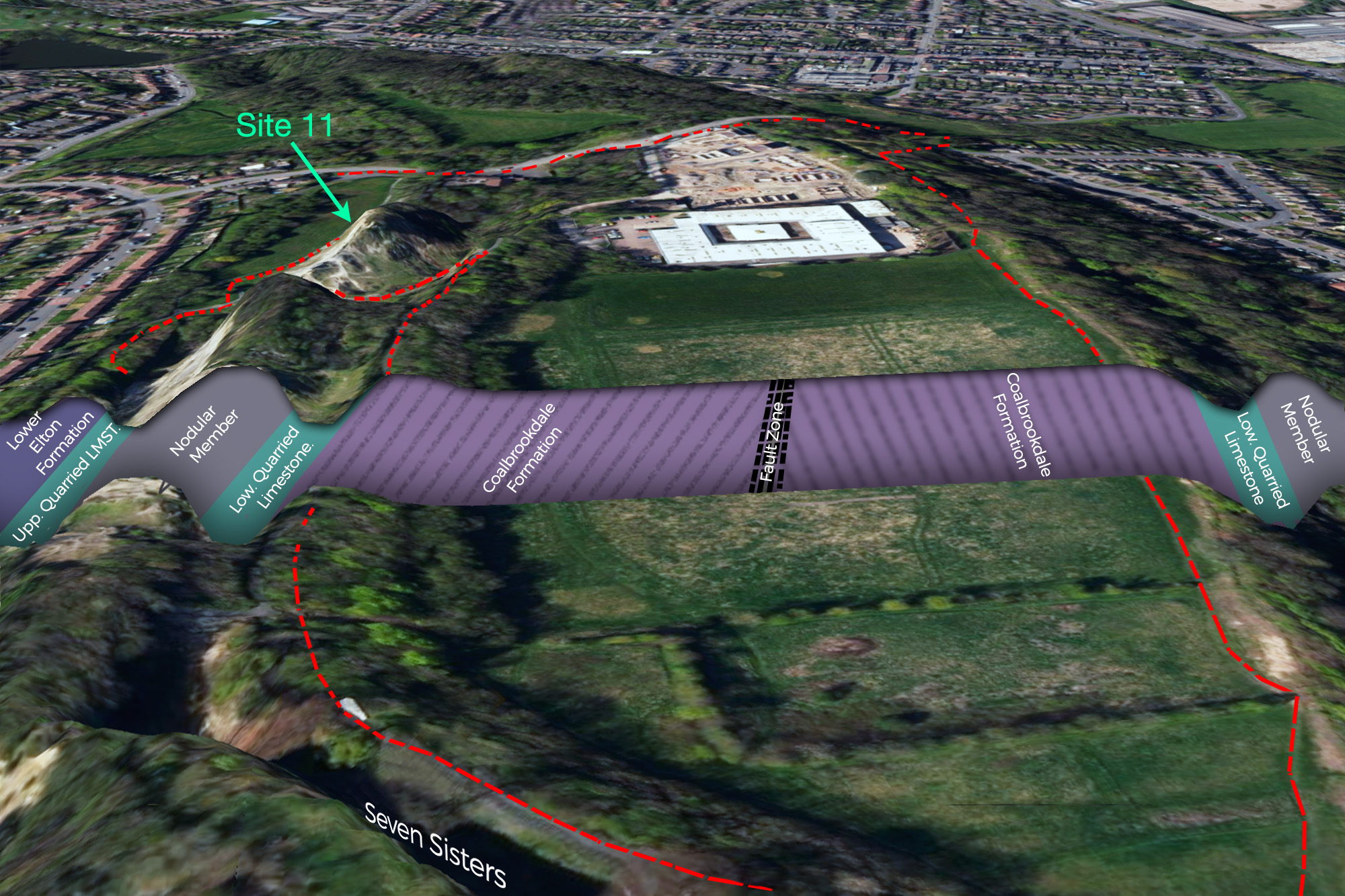 The gashes formed as the layers were folded upwards into an arch. Geologists call an upfold or an anticline. At the hinge line of the arch in the rocks they get stretched around the bend and as rocks are hard and brittle they snap rather than stretch and gashes open up parallel to the axis of the fold.

In this case it is not a symmetrical upfold, but has a much steeper side to the east than on the west – it is an asymmetric anticline. The rocks are also slightly arched up from north to south, creating a domed shaped called a pericline. (See diagrams for Site 4). 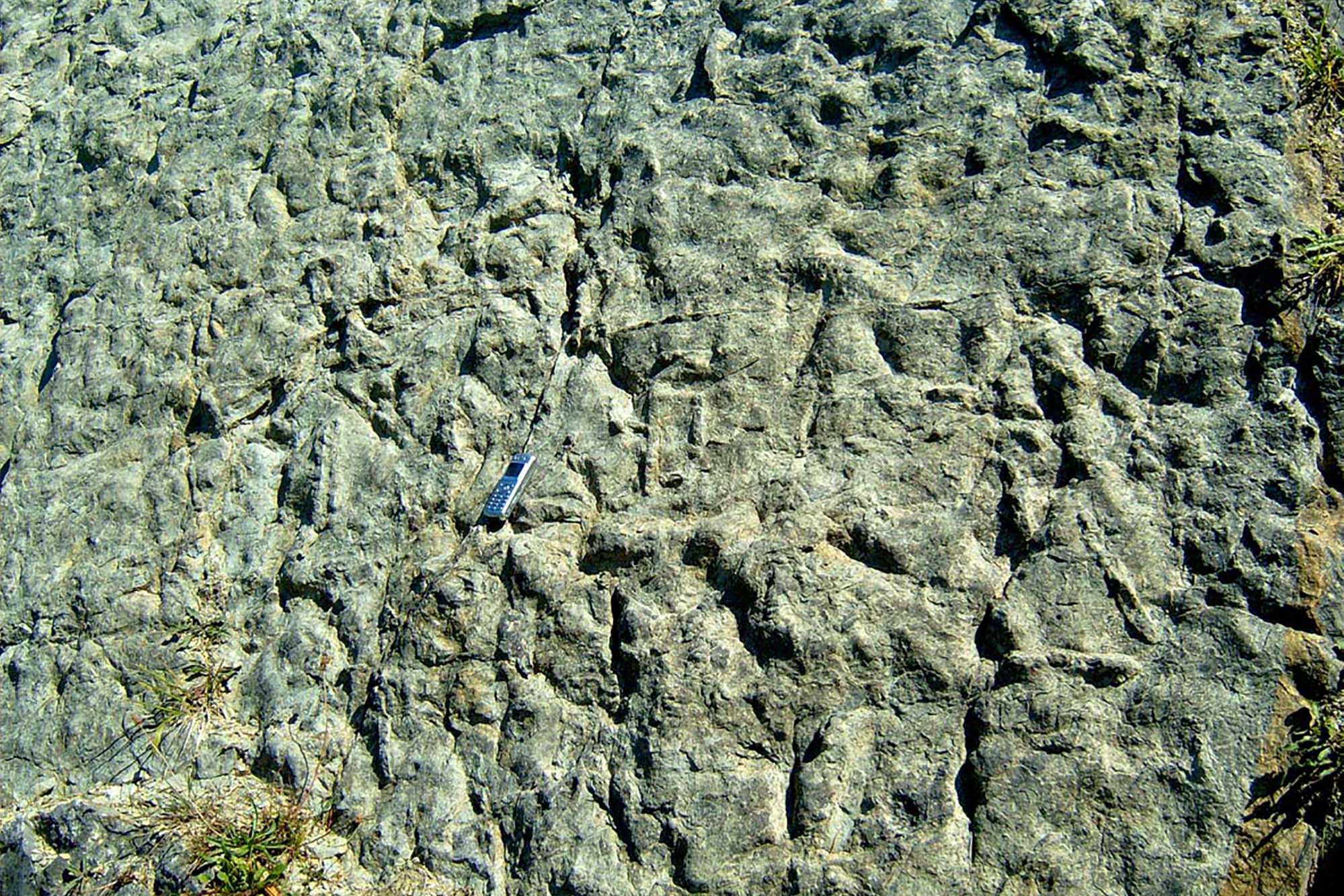 These rock layers have other distinctive features. They are not smooth like some of the rock layers we see and they don’t have nice ripple marks or shelly layers full of fossils. They are more uneven and appear to have lots of straight grooves randomly arranged on their surface. Some of these are single straight grooves others are double lines and some are ‘Y’ shaped or branch in a more irregular pattern. These are the remains, tracks or traces of animals that burrowed in the sediments when it was a soft seabed. They have churned the layer up by their activities and we see a heavily bioturbated layer at this point. 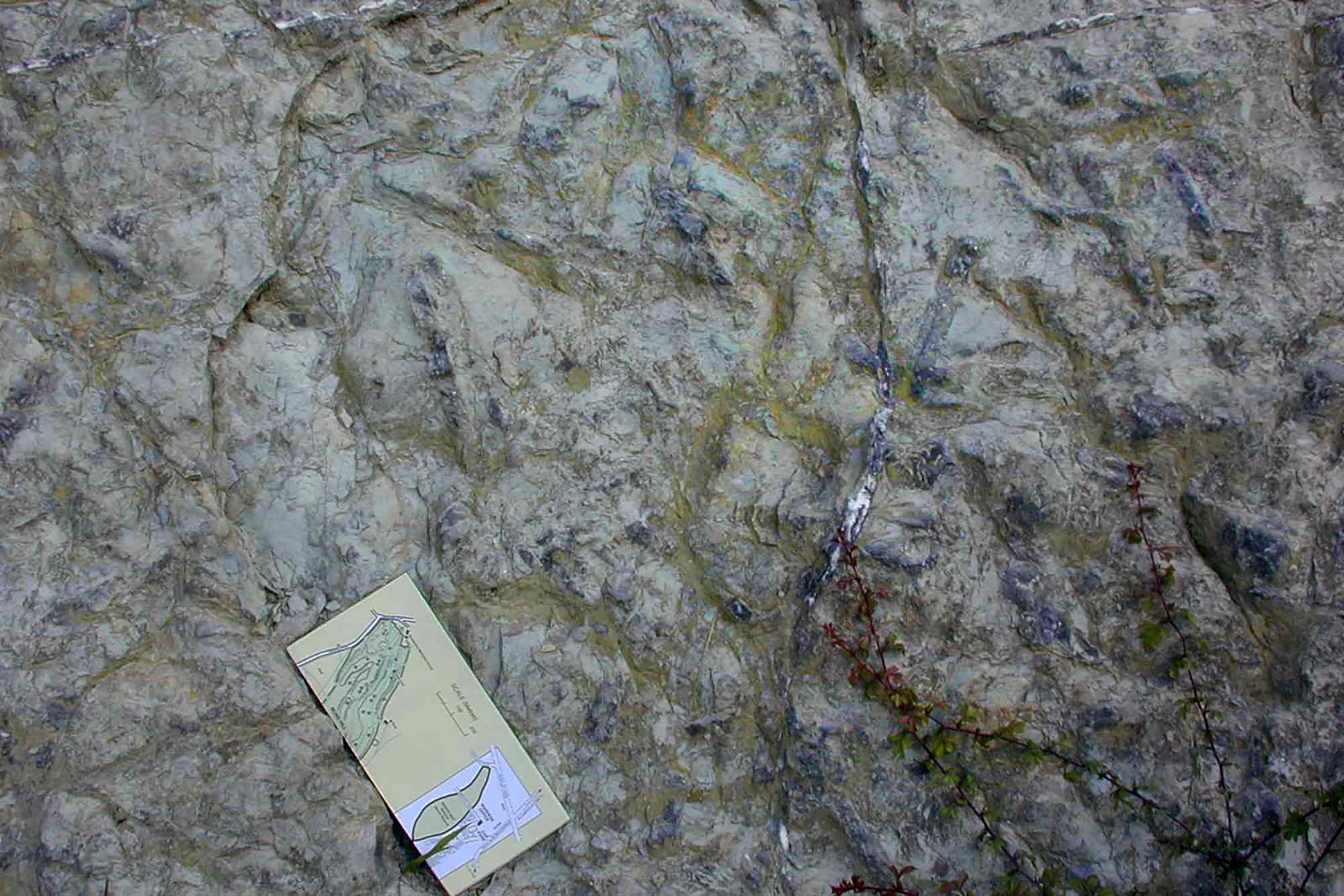 Another type of trail

Have a close look and see how many types of burrows you can find.

This is the last site on the Voyage and your last chance to build your final score! 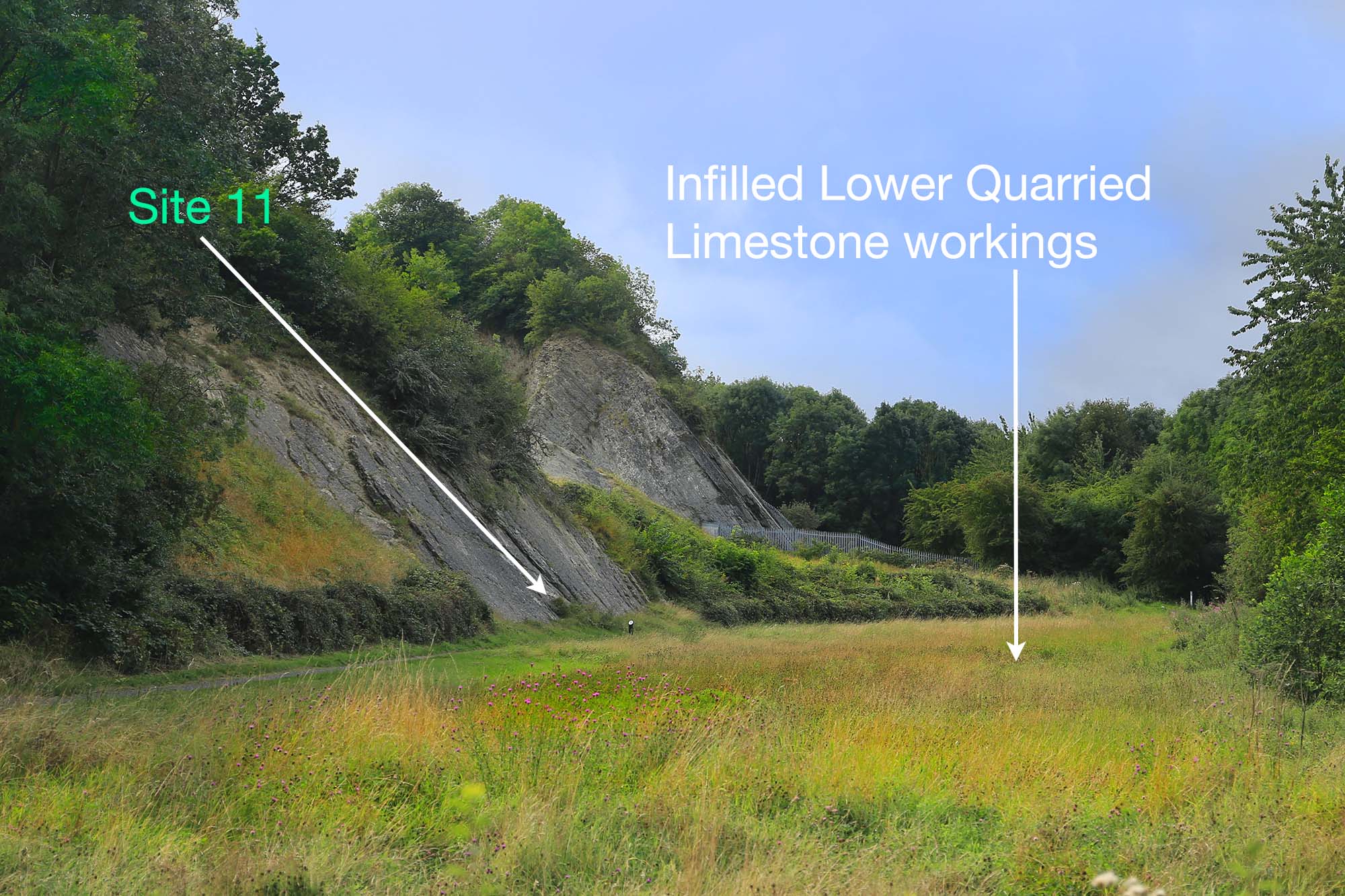 If you turn around and look away from the rock face you can see how flat the field is and in spring and summer it is full of wildflowers including orchids. This is where the Upper Quarried Limestone layer used to be before it was completely quarried away from the side of the hill. The limestone layer was also followed down below ground level as underground limestone mines. When these mines were abandoned there were deep holes where these fields are now. Those abandoned mines were infilled with sand during the 1960’s and 1970’s and landscaped to create the meadows that now grace this side of the hill.

Wren’s Nest National Nature Reserve is an amazing place that is created both by nature working over immense lengths of geological time and the labours of practical men. Without the miners part of this place’s story this would still be a gentle forested green hill in the centre of England and there would be no rock faces to see or fossil treasures on its ground to find. Spare a little thought for those who made this place all that it is in our time.