8 Summit
Back to map 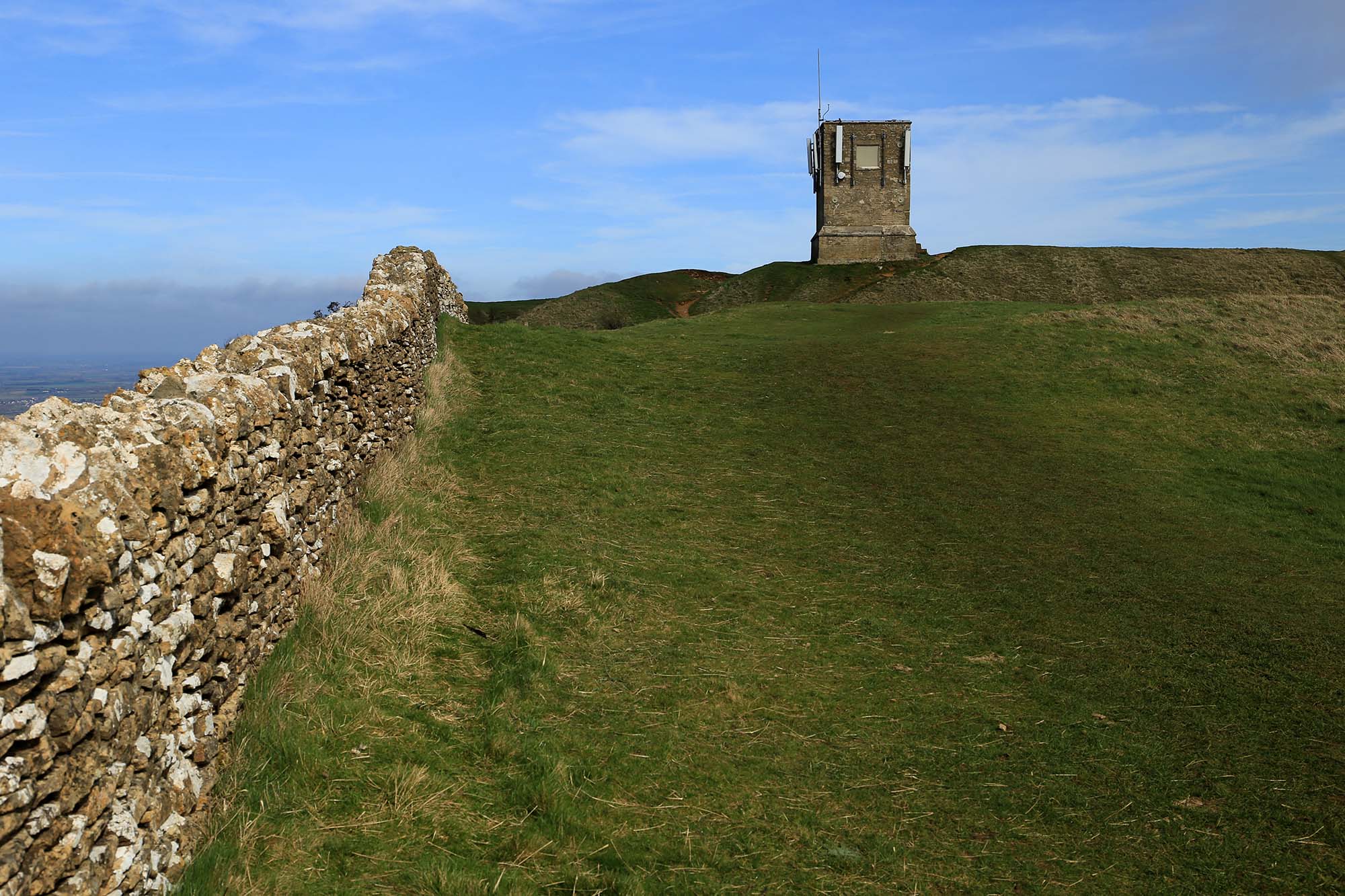 It is sometimes said that the Parson’s Folly, the square tower, now used for telecom transmission was constructed to make Bredon Hill higher than the top of Broadway Tower that sits on the top of the Cotswold Escarpment to the west. Mr Parson, a resident of Kemerton, constructed the tower in the late 18th century, as a summer retreat.

The view takes in a number of counties. 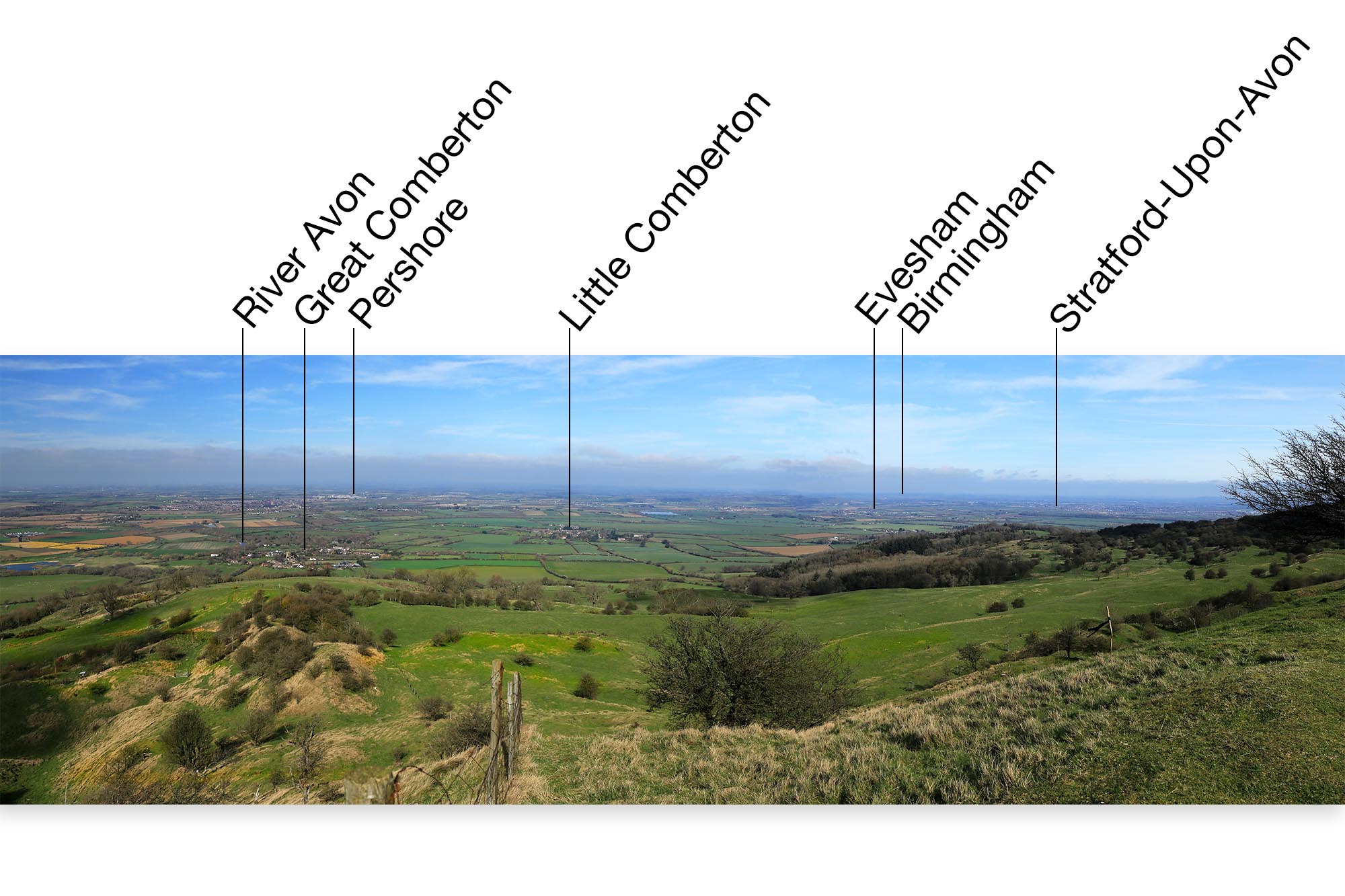 To the north, the view is mainly across the West Midlands. The market town of Pershore, lies on the Avon. Beyond the vista extends as far as the Lickey Hills, and when the visibility is clear, the tall buildings of Birmingham.

This view is taken from the north facing escarpment edge, about 150m north from Parson’s Folly. 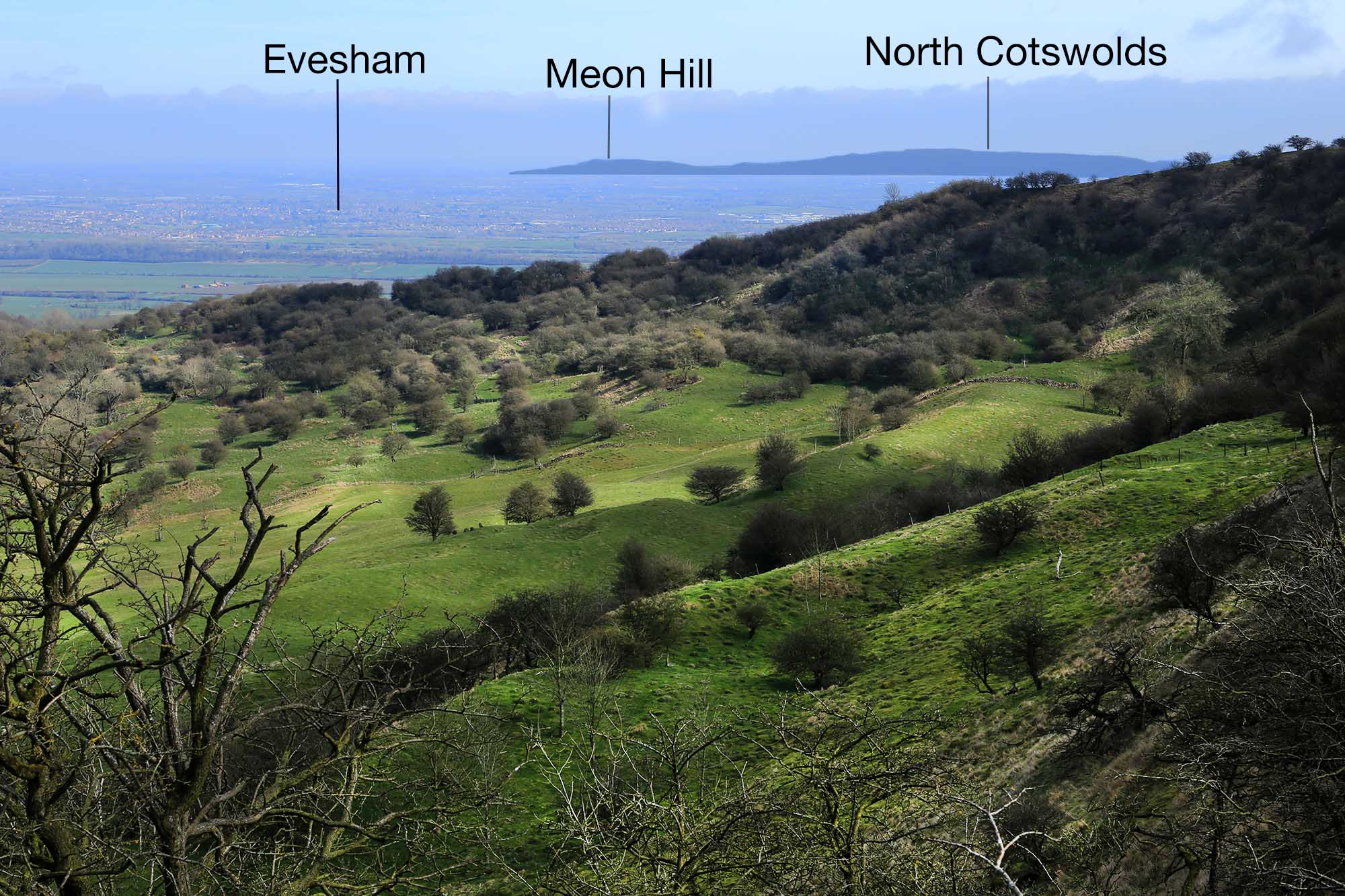 Eastwards along the silvery line of the River Avon, the view extends past Evesham (Worcestershire) with its famous Vale towards Stratford on Avon (Warwickshire).

Note all the hummocky ground on the scarp slope. This is all due to landslips. Bredon Hill is falling down! 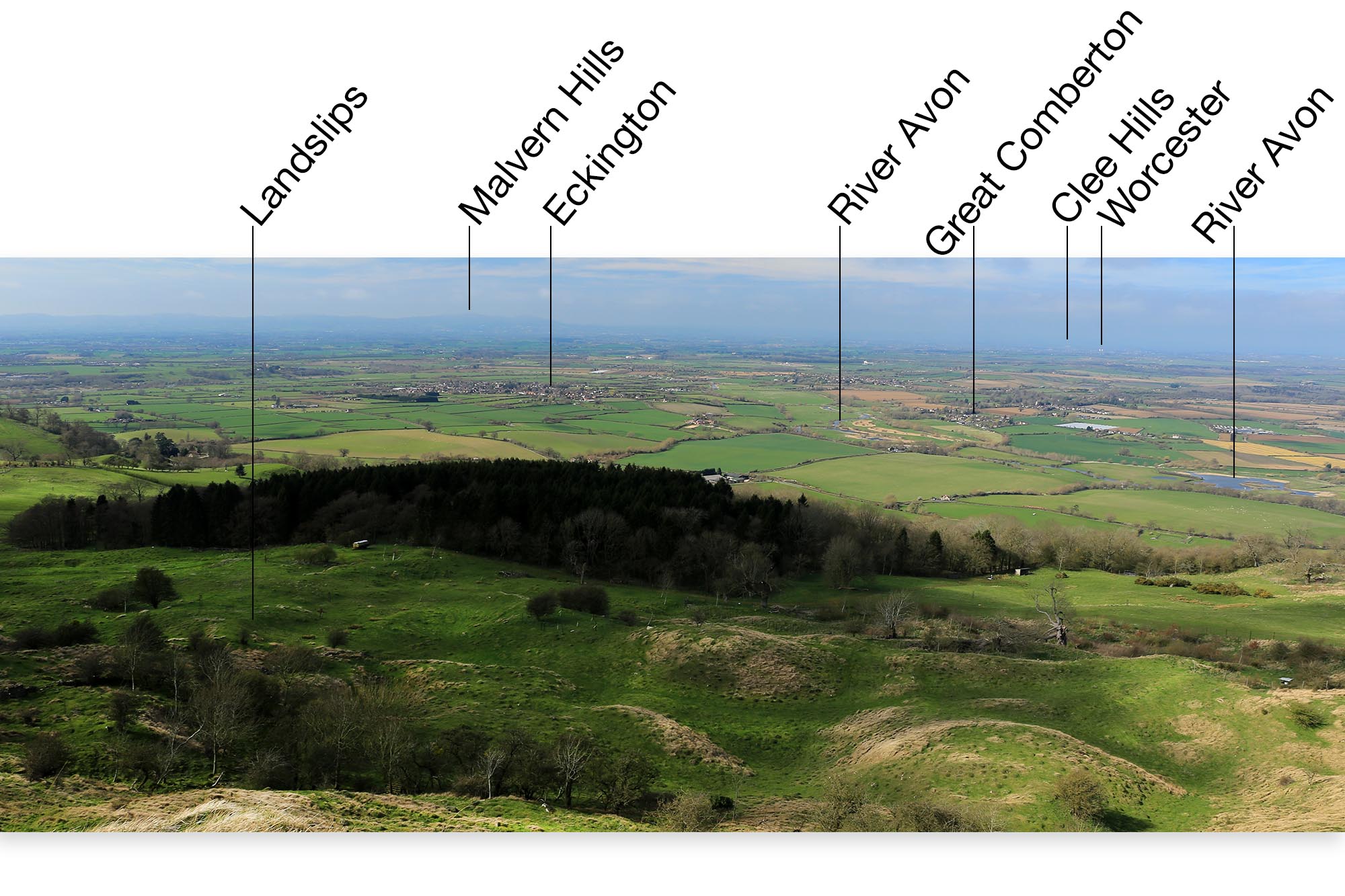 The northwest views are predominantly on a landscape formed from older Triassic sandstones and marls, important in the Droitwich area for their beds of salt.

Further on, the view extends as far as Clee Hill in Shropshire, and beyond. The city of Worcester and the town of Droitwich lie in the middle ground. 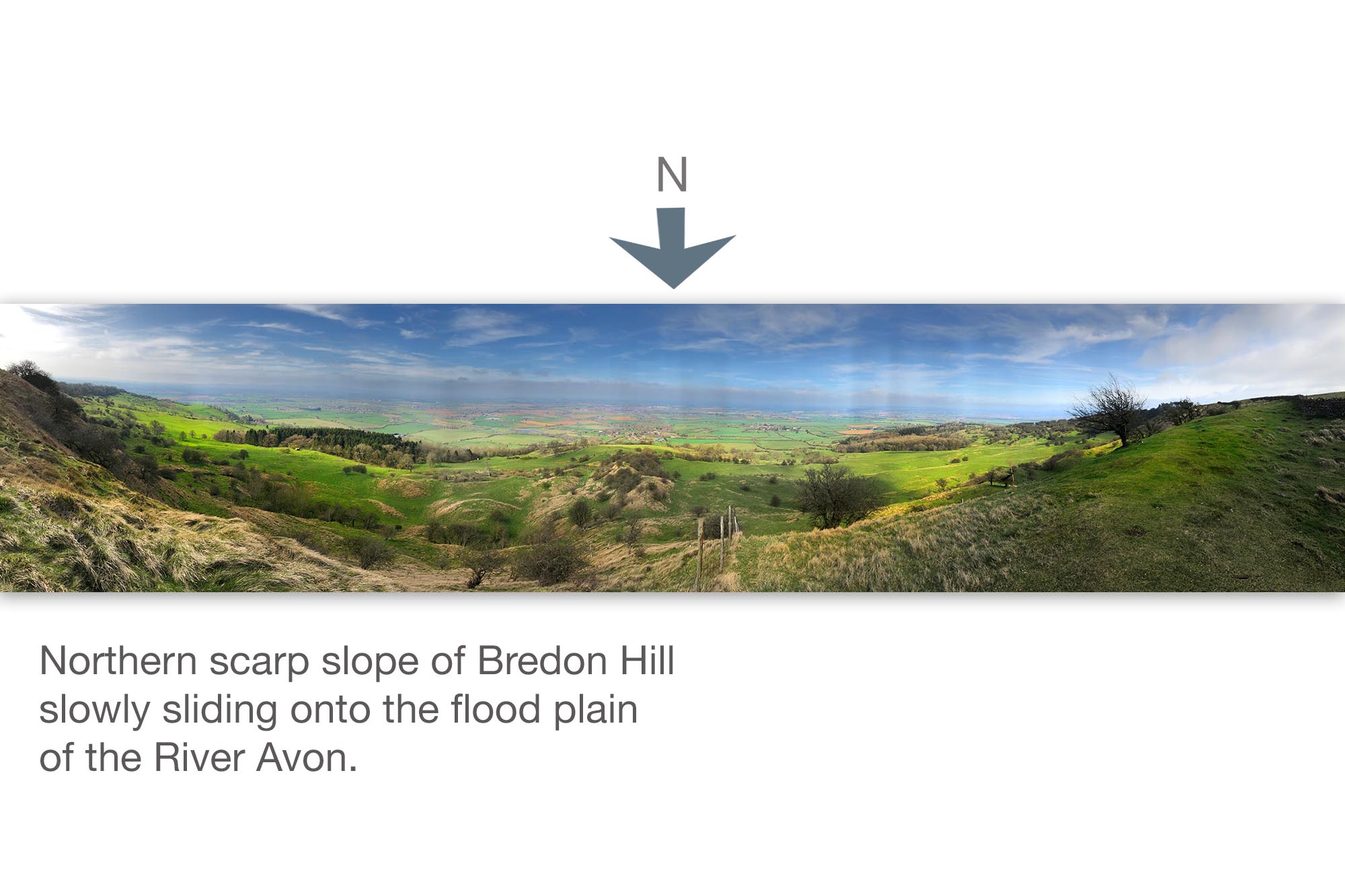 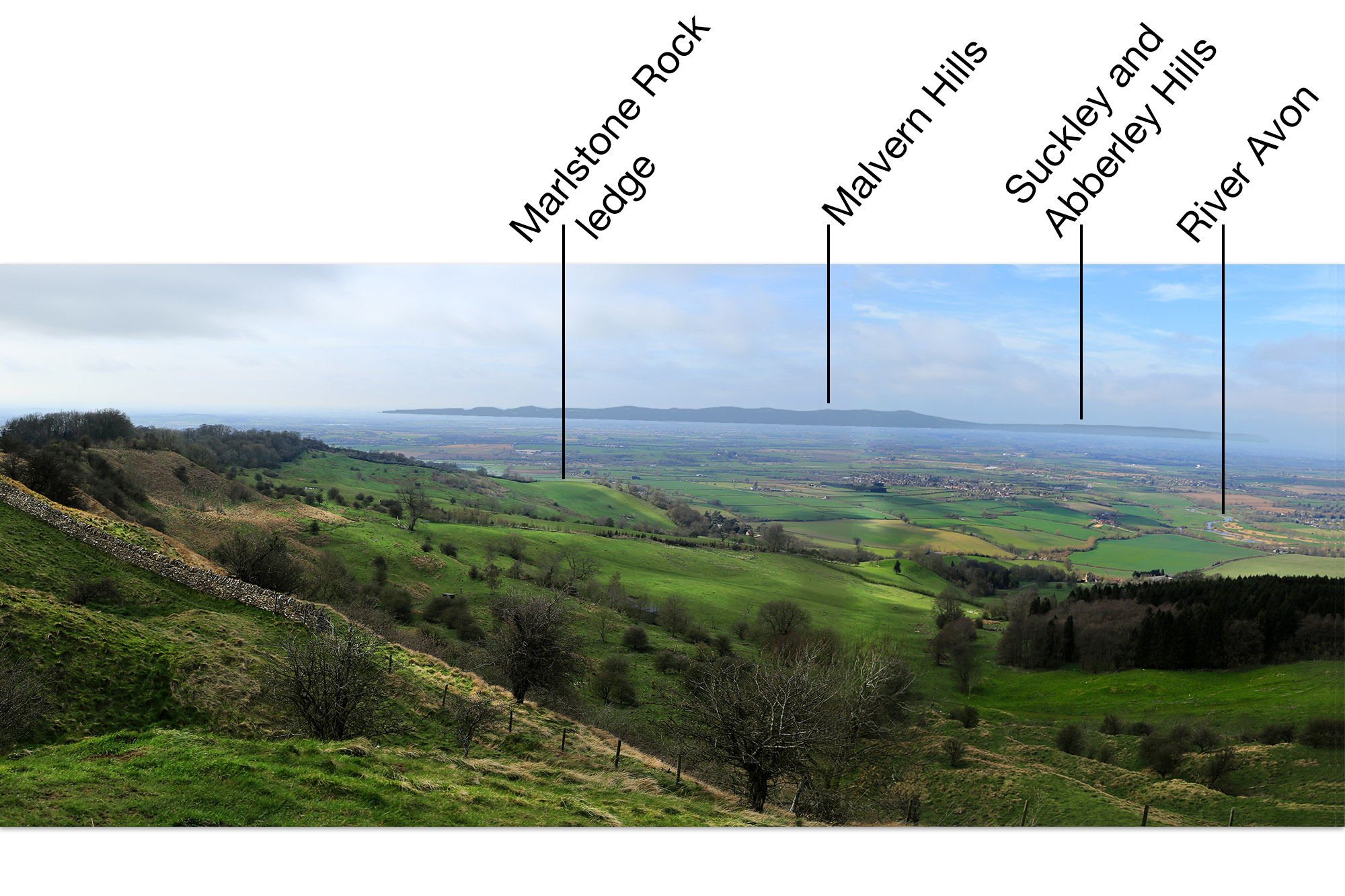 The north-south aligned chain of the Malvern Hills, that are composed of much older Pre-Cambrian Rocks, dominates the western view, beyond which lies the county of Herefordshire. 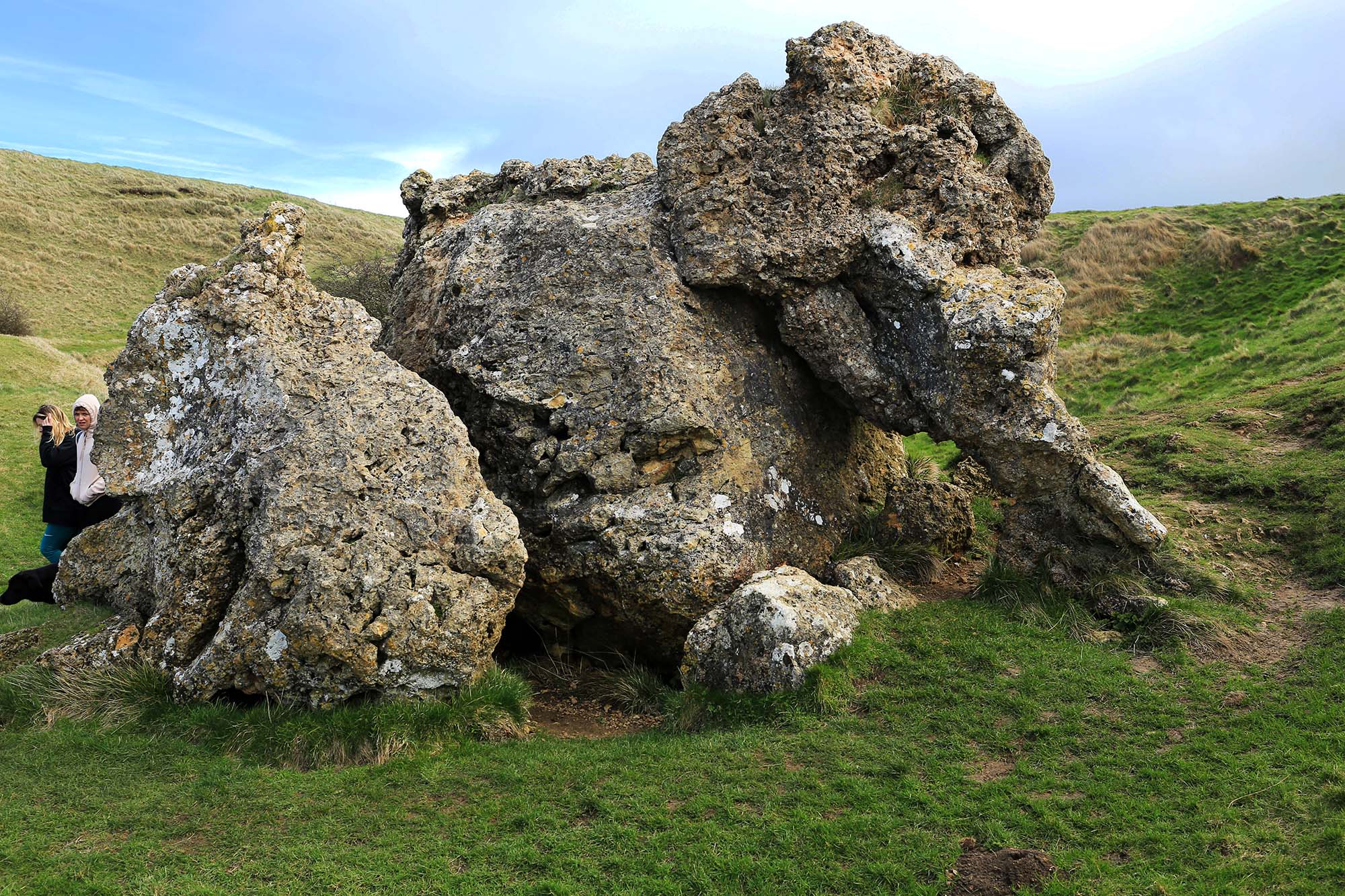 The Banbury Stone lies in a deep hollow just to the east of the Folly. Do take care descending down the slope as the pathway can be slippy.

The Banbury Stone is composed of numerous limestone fragments that have been naturally cemented together with tufa (dissolved and redeposited limestone).

The lack of significant folklore about the Banbury Stone may indicate that its origins are quite recent. It has long been regarded that the hollow is an old quarry and that both stones within the hollow were left by the quarrymen as being too poor in quality to work. However, there is another explanation (see next). 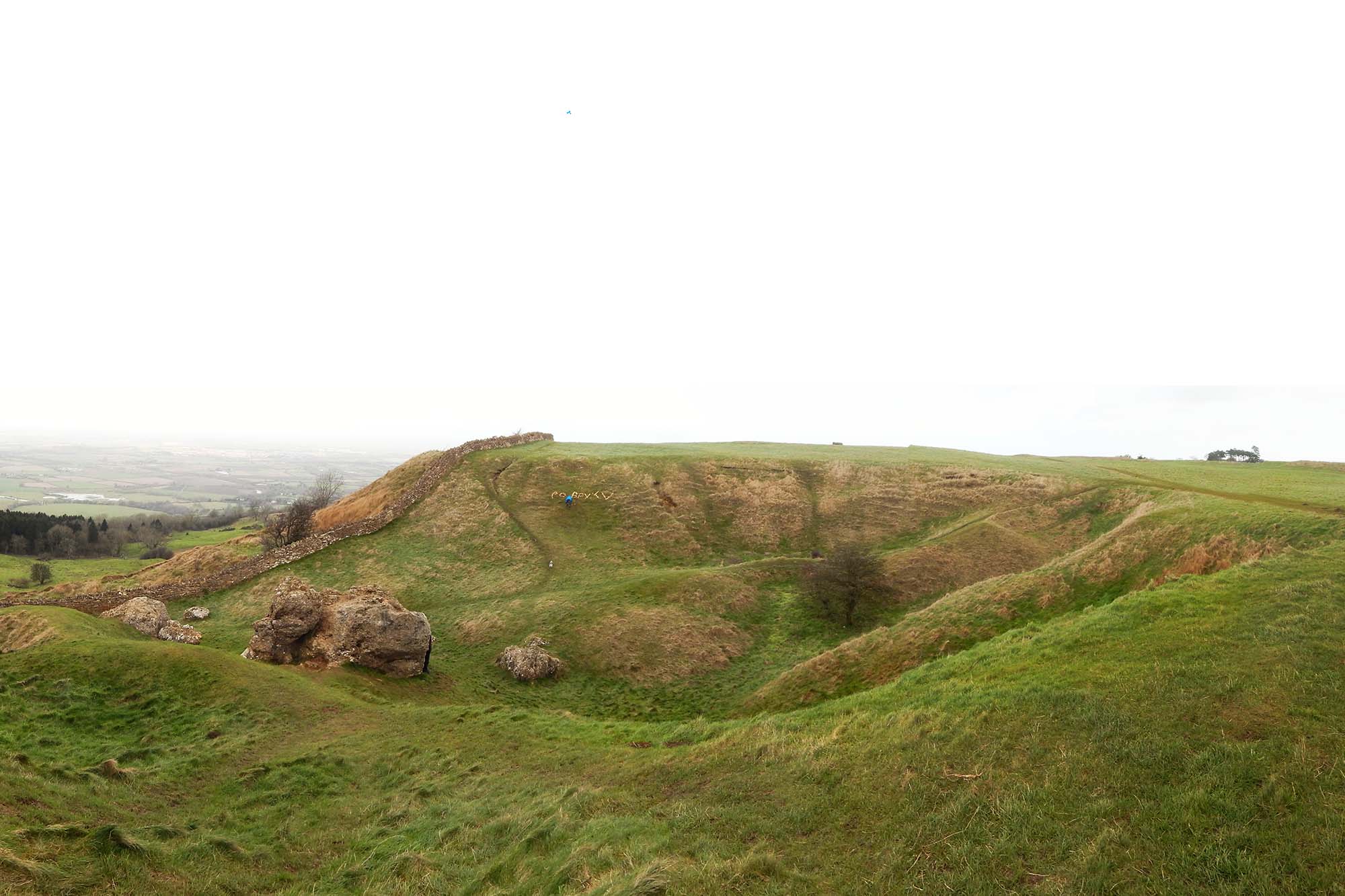 In the early 1700s, a cave was recorded at the top of Bredon Hill. At the end of the 1700s, there was a major landslip in the area. It was noted that grain was found amongst the landslip material. It was common practice in the Iron Age, especially where there were hillforts, to store grain in cavities that could be sealed from the elements. It is presumed that the landslip occurred on the northern edge of the hill.

There are no caves on the top of Bredon Hill now, so it is possible that the hollow in which the Banbury Stone sits is actually a collapsed cave system that had formed within a system of ‘gulls’ or fissures in the limestone. 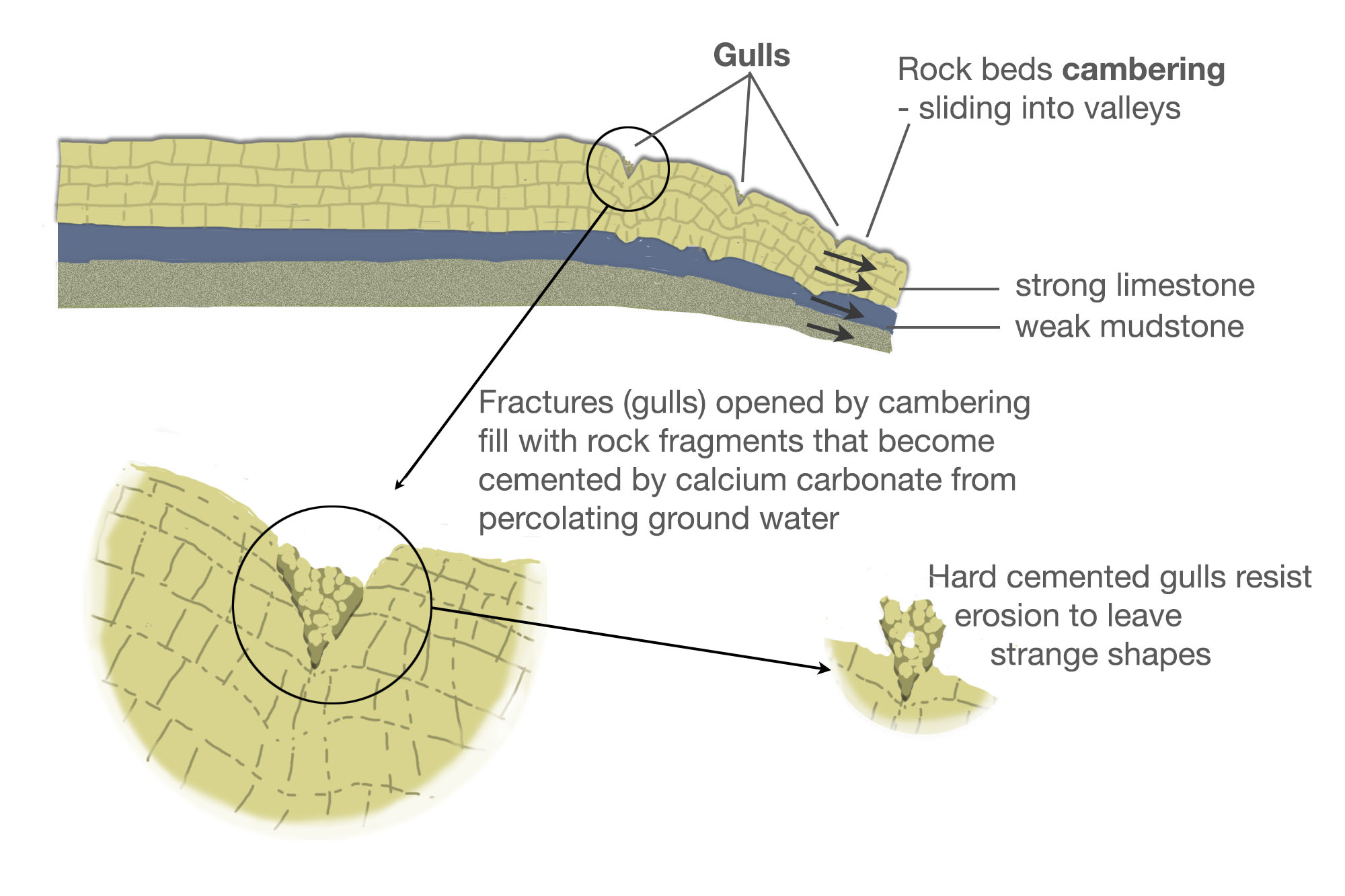 The Lias clays are relatively weak, plastic rocks compared to the much stronger overlying limestone, and consequently the heavy limestone cap causes the clays to migrate laterally. Resting on such a weak base, the limestone fractures, and starts to slowly slide down the lateral slopes. The dip of the limestone over the edge of the escarpment is called ‘cambering’.

The fractures or joints tend to occur at right angles to the dip of the limestone, which is generally to the south. The fractures are referred to as ‘gulls’ by quarrymen.

Gulls’ occur throughout the Cotswolds wherever limestone rests on clay. Cave systems are known to develop within the limestone, in and around ‘gulls.’

Limestone fragments that have broken off the sides of the fracture infill the ‘gulls.’ This assortment of limestone fragments is then re-cemented together by calcium carbonate from percolating water, usually in the form of brownish tufa. The resulting material is referred to as ‘gull rock’, or in geological terms a limestone breccia.

Inevitably the greatest concentrations of gulls occur at the very top of the hill, where the limestone is sliding on the clay in two directions. It is probable that the ‘gull rock’ has a periglacial origin, where alternating freezing and thawing would have readily fractured the exposed limestone surfaces. 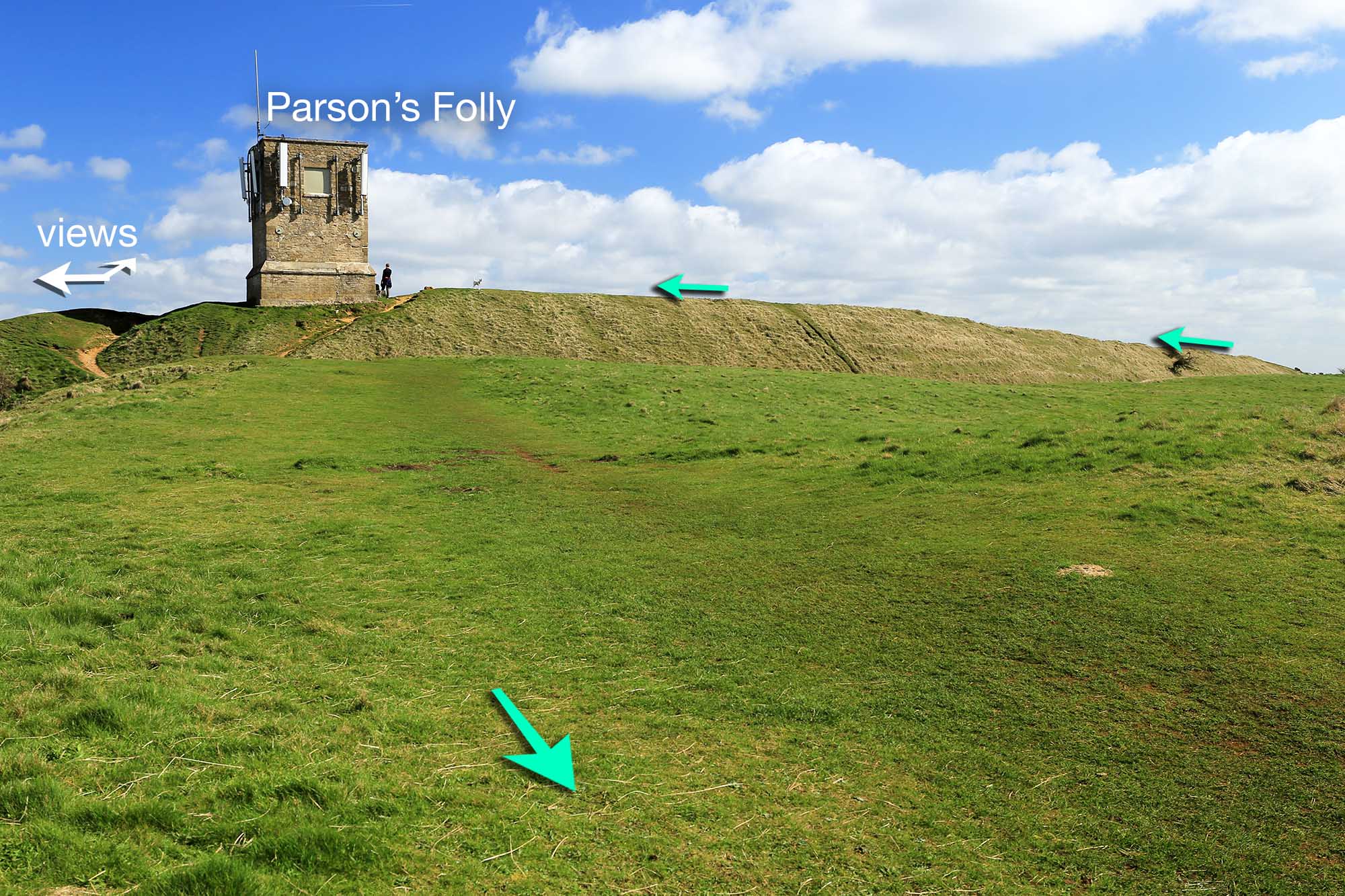 Start walking downhill away from the Parson’s Folly. 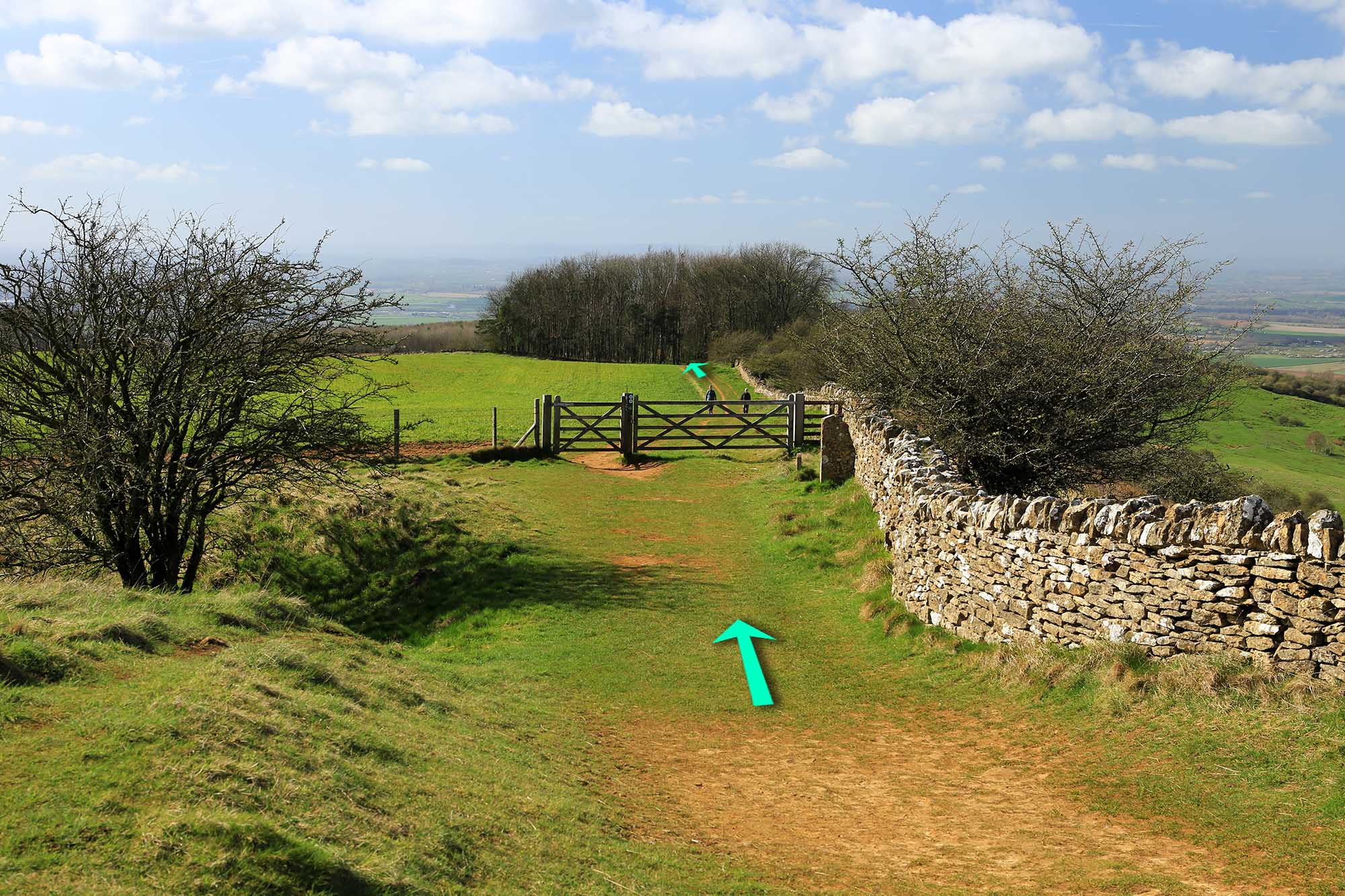 Head downhill. Near the gate take a look over the stone wall and do Task 9.

What animal do you see when you view the Banbury Stone from the west?