3 Cotswold Landscape
Back to map 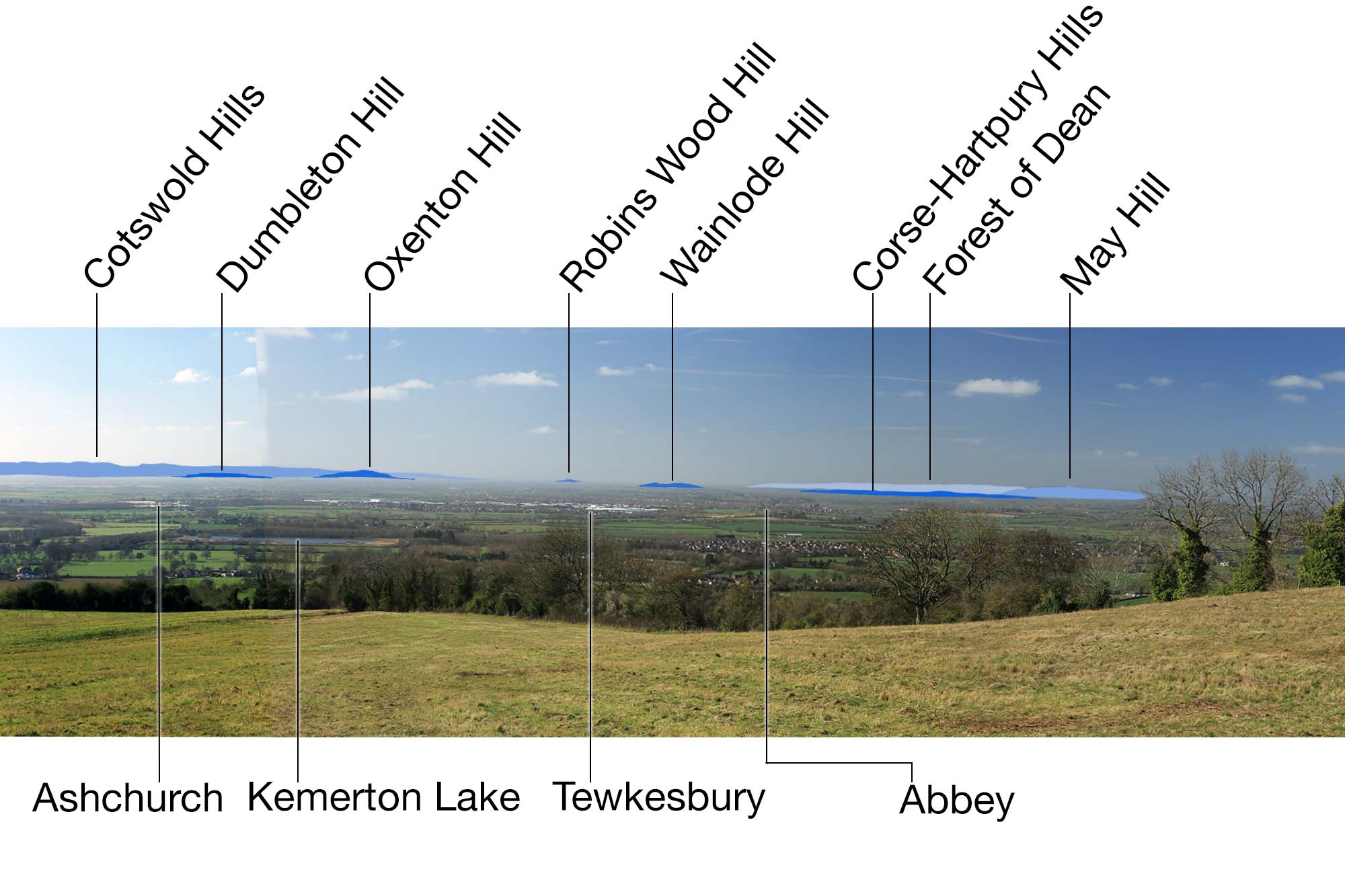 As you walk uphill take in the view eastward to the main Cotswold escarpment, and the Severn vale to the south and west that is unfolding behind you. The Cotswold escarpment appears as a continuous line of hills in the distance, capped like Bredon Hill with the Birdlip Limestone. The flat valley has been formed by the River Severn flowing into the Bristol Channel. When there is good visibility it is possible to see the two bridges that cross the Bristol Channel, near Bristol. The Severn valley is dotted with little hills that are outliers of the Cotswold escarpment, for example Robins Wood Hill and Churchdown Hill located between the conurbations of Cheltenham and Gloucester. 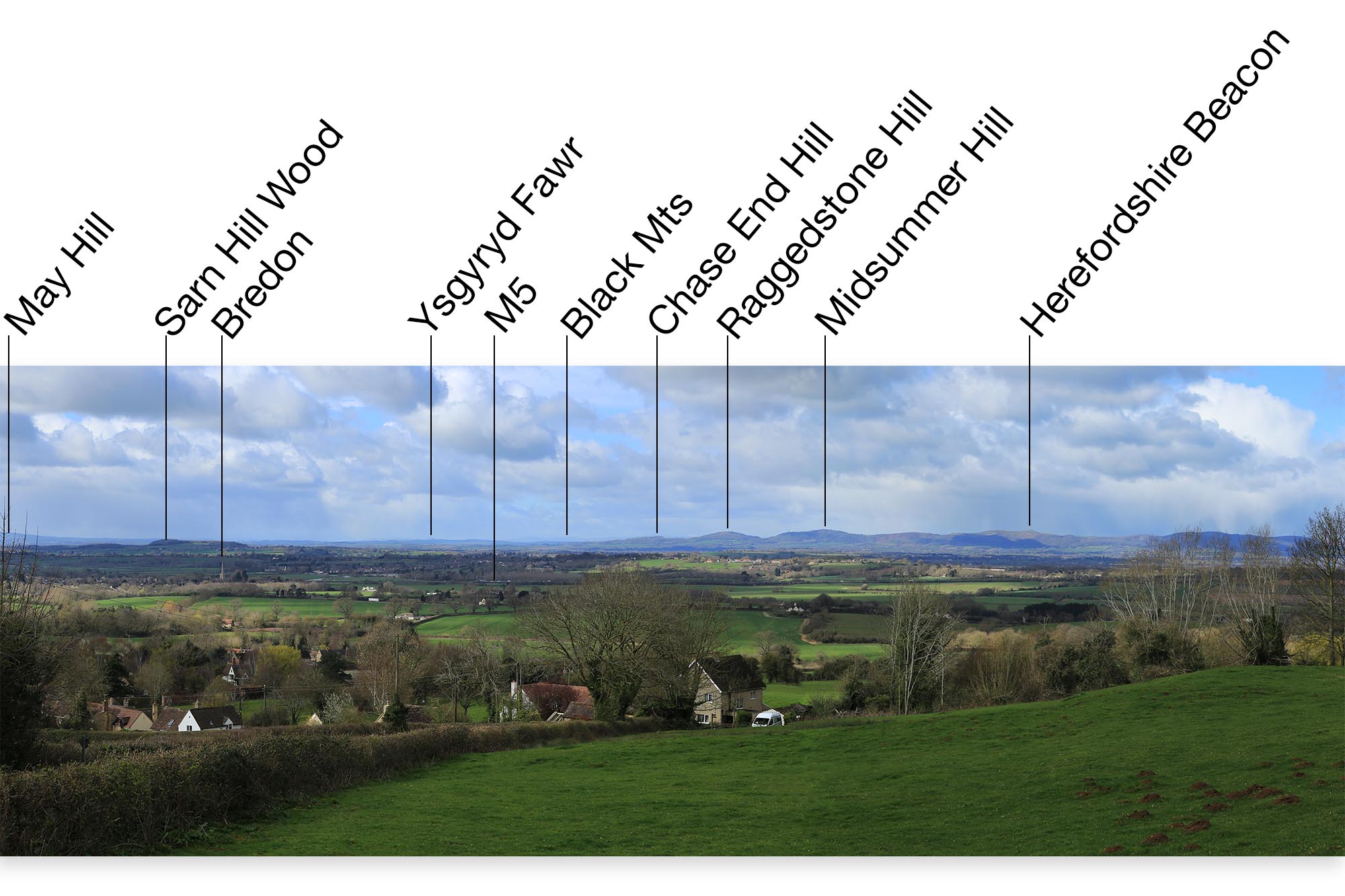 View to the west from May Hill to the Malvern Hills, with distant views (on a clear day) of the hills along the England-Wales border. The rocks of all these hills are much older than the Jurassic rocks of Bredon Hill.

In the Voyager app, if you touch the clock at the top of the screen and scroll down the coloured time column on the left of the screen you can find out more about the Earth during Devonian, Silurian and older times. 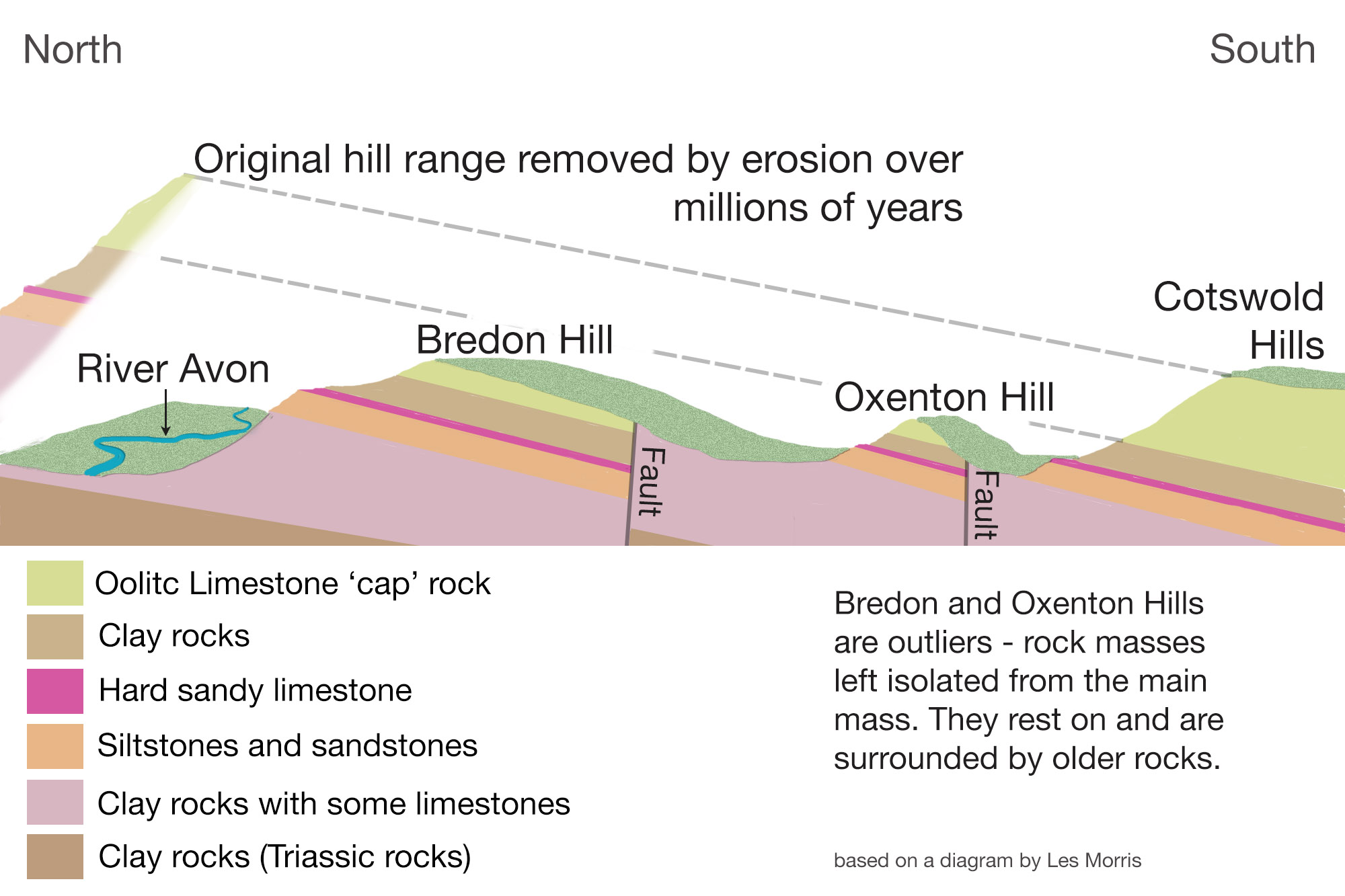 Outlier of the Cotswolds

Bredon Hill is an outlier of the Cotswolds. Geologically, an outlier is an area of younger rock completely surrounded by older rocks. An outlier is typically formed when sufficient erosion of surrounding rocks (here, that is Lower and Middle Jurassic strata) has taken place to sever the younger rock’s original continuity with a larger mass of the same younger rocks nearby (Cotswold escarpment).

There is an east-west aligned fault to the south of Bredon Hill. A fault is a break in the strata where the rocks on either side of the break are displaced. The fault here has assisted in the formation of Bredon Hill. The fault downthrows younger Middle Jurassic strata (the limestone) against older rock. If this faulting had not happened, then the harder limestone layer that is more resilient to erosion than the underlying clay would have not been present here at this level, and Bredon Hill would probably not have been formed. 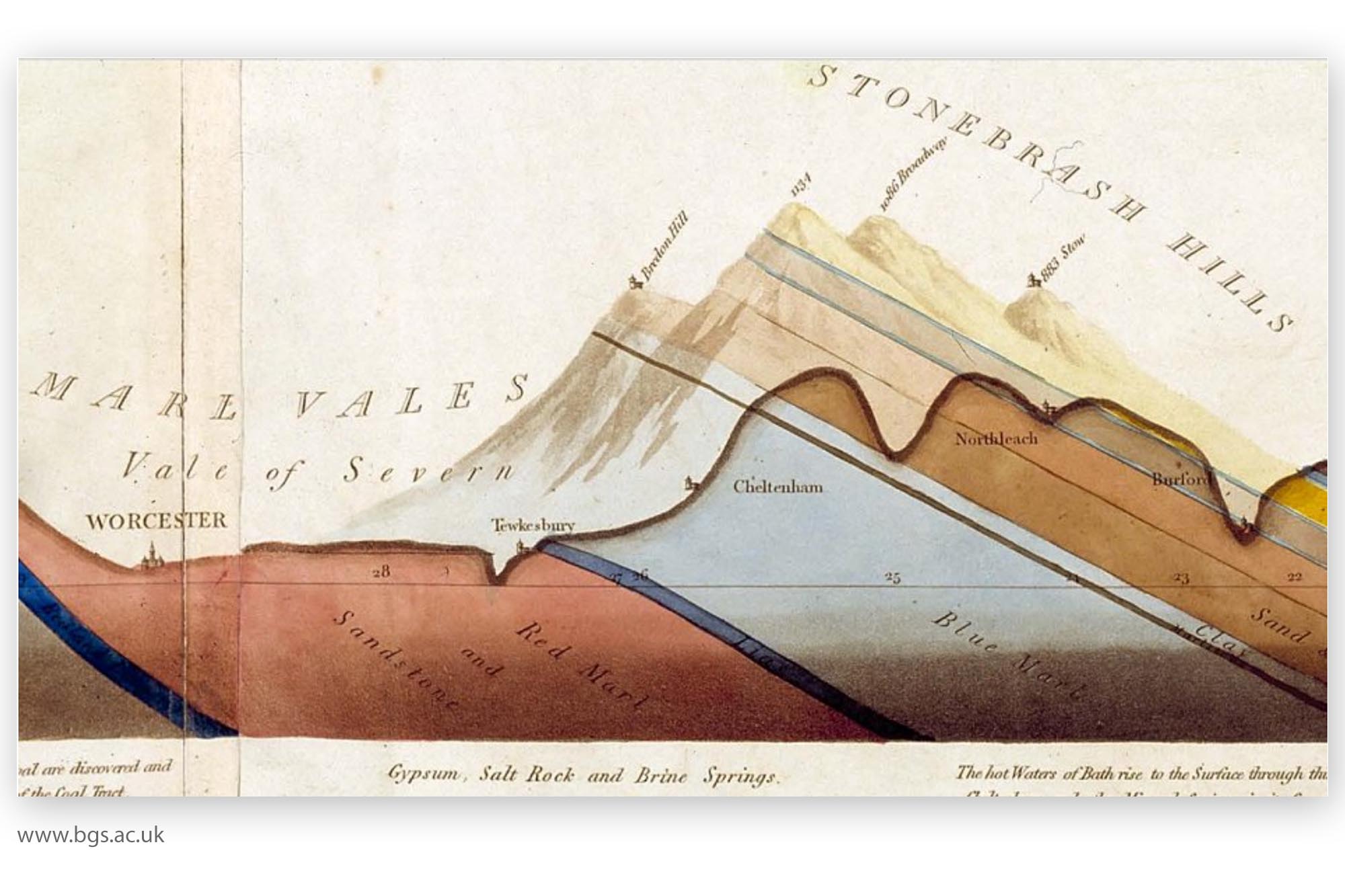 William Smith (1769 to 1839), a surveyor from Oxfordshire, was the first person to map the geology of England and who produced the first geological map of England. He is widely regarded as the ‘father of English Geology’.

In addition to maps, Smith also published geological sections. One section published in 1817, illustrating the geological variations that occur between London and Snowdonia, and shows the Cotswold Escarpment, which he refers to as the Stonebrash Hills) and Bredon Hill. Although the vertical scale is exaggerated Bredon Hill can be clearly identified as an outlier, detached from the main escarpment. 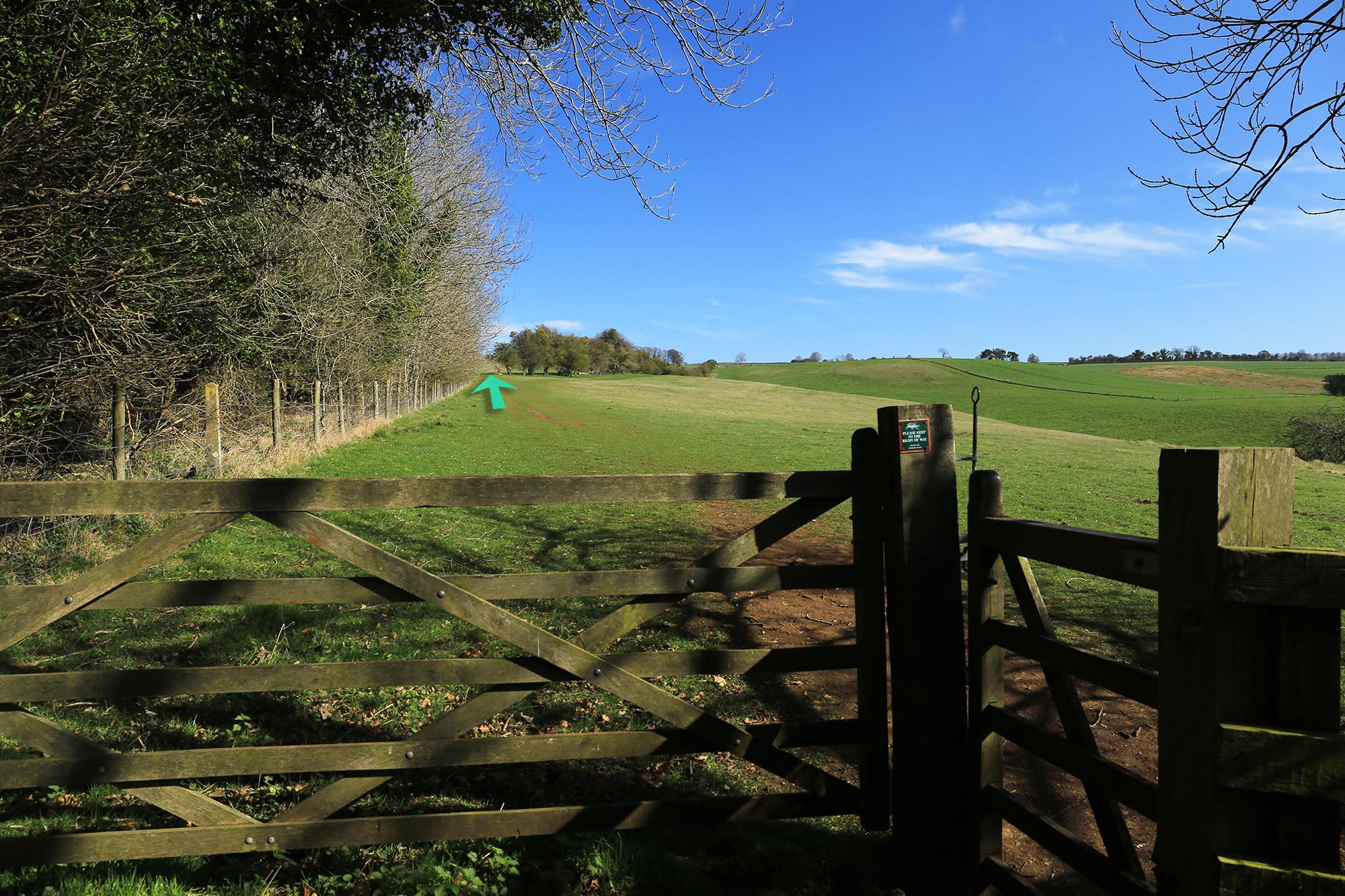 The stone gate post in the next image is located by the tip of the arrow in this picture. 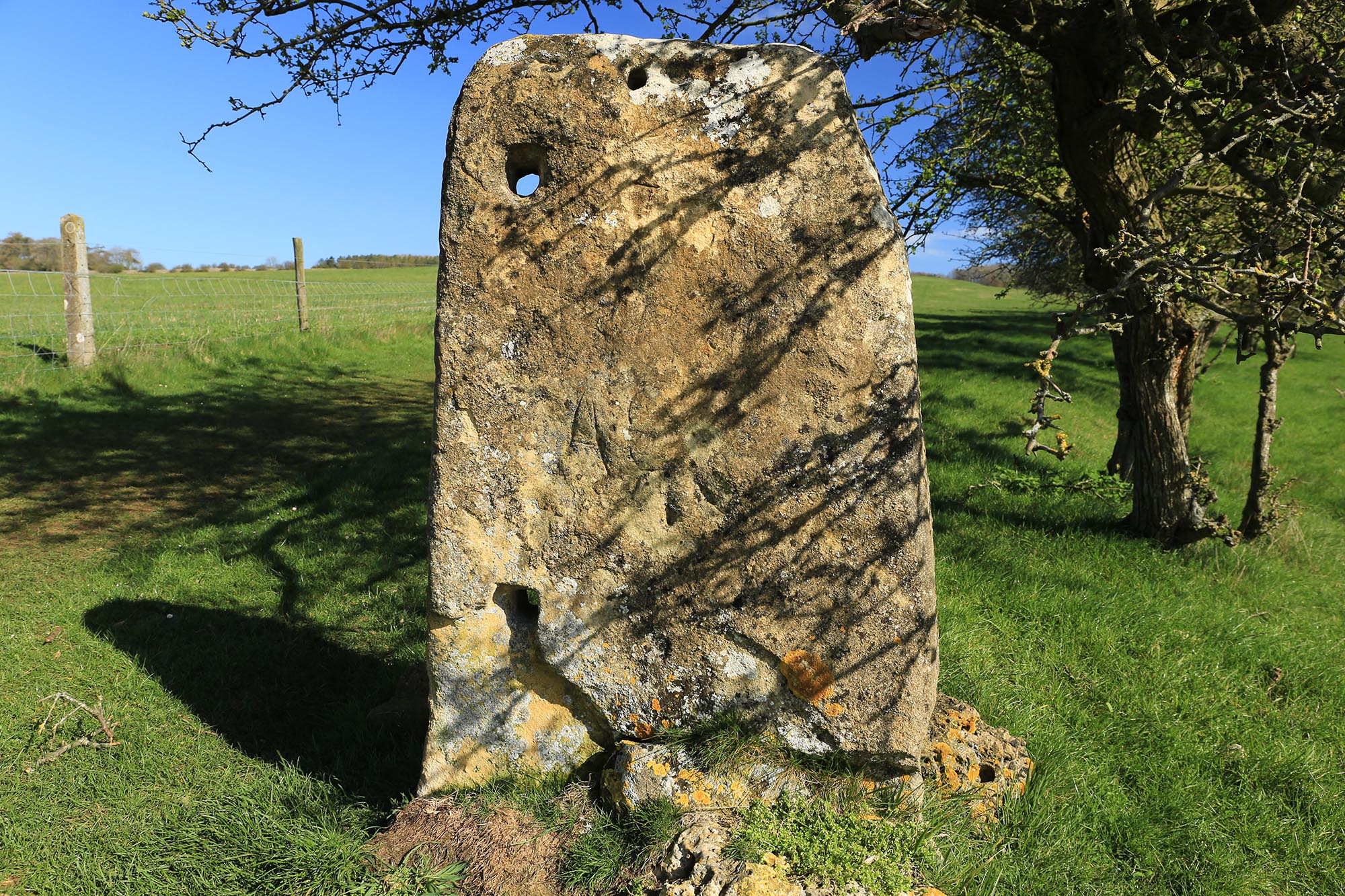 Quarrying was once one of the main industries of the area. The quarried limestone was used to build many features within the Cotswold landscape. The pretty villages are distinctive with their creamy / yellow / orange stone buildings, stone-walling and other stone features.

In this section of the Voyage there are also several examples of stone gateposts. The holes in the pillars held the mountings for gate hinges. 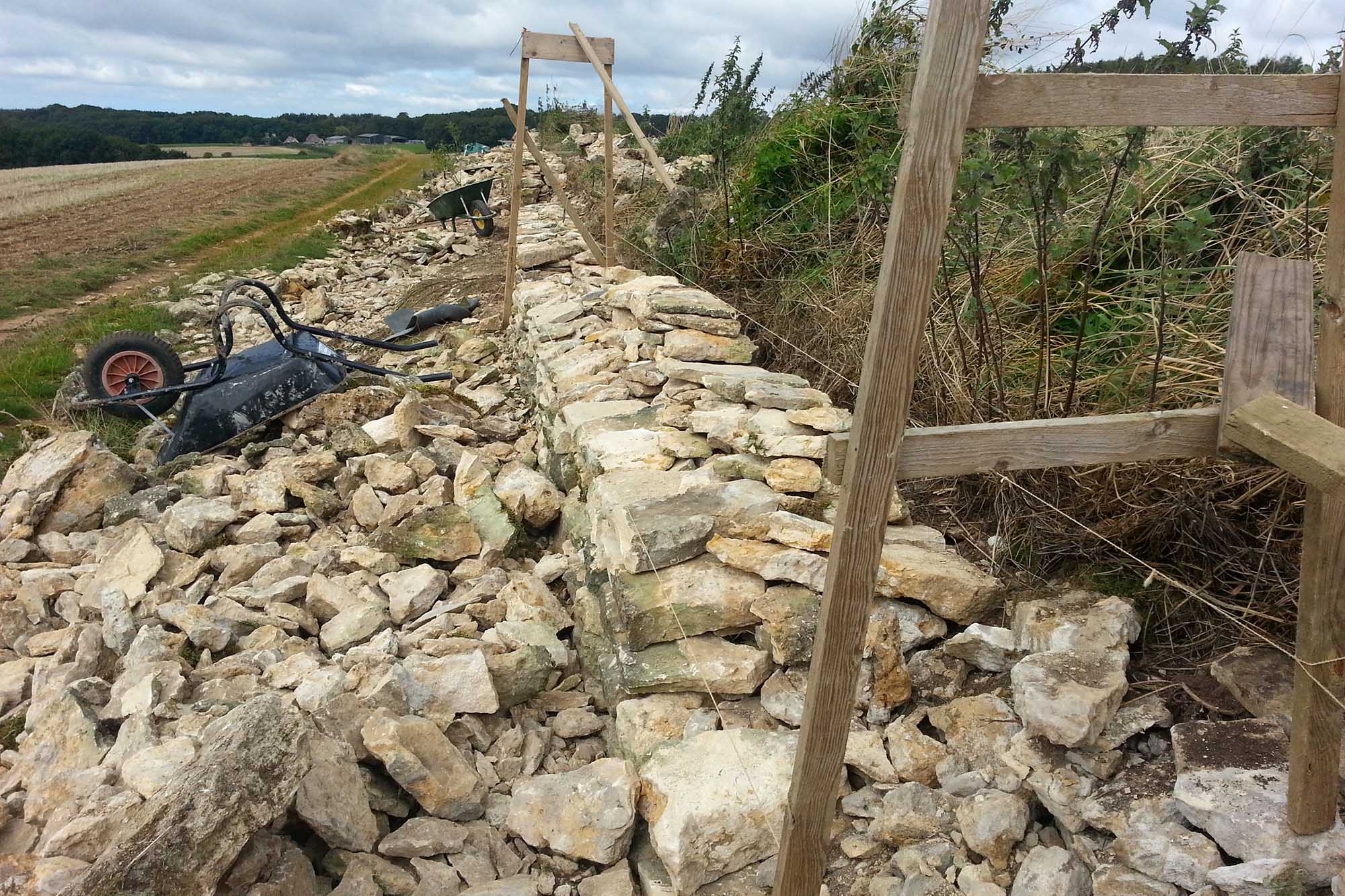 Limestone was quarried extensively on Bredon Hill and each village, on the south side of the hill had its own series of quarries. You will have just passed the quarry for Bredon parish on your left in the wooded area (Do not enter). The sunken path you have followed was the quarry track.

The majority of quarries on Bredon Hill however, are little more than pits for stone to build the characteristic limestone walling that criss-crosses the hill and its upper slopes. Bredon Hill has the greatest length of dry stone walling in the whole of Worcestershire. 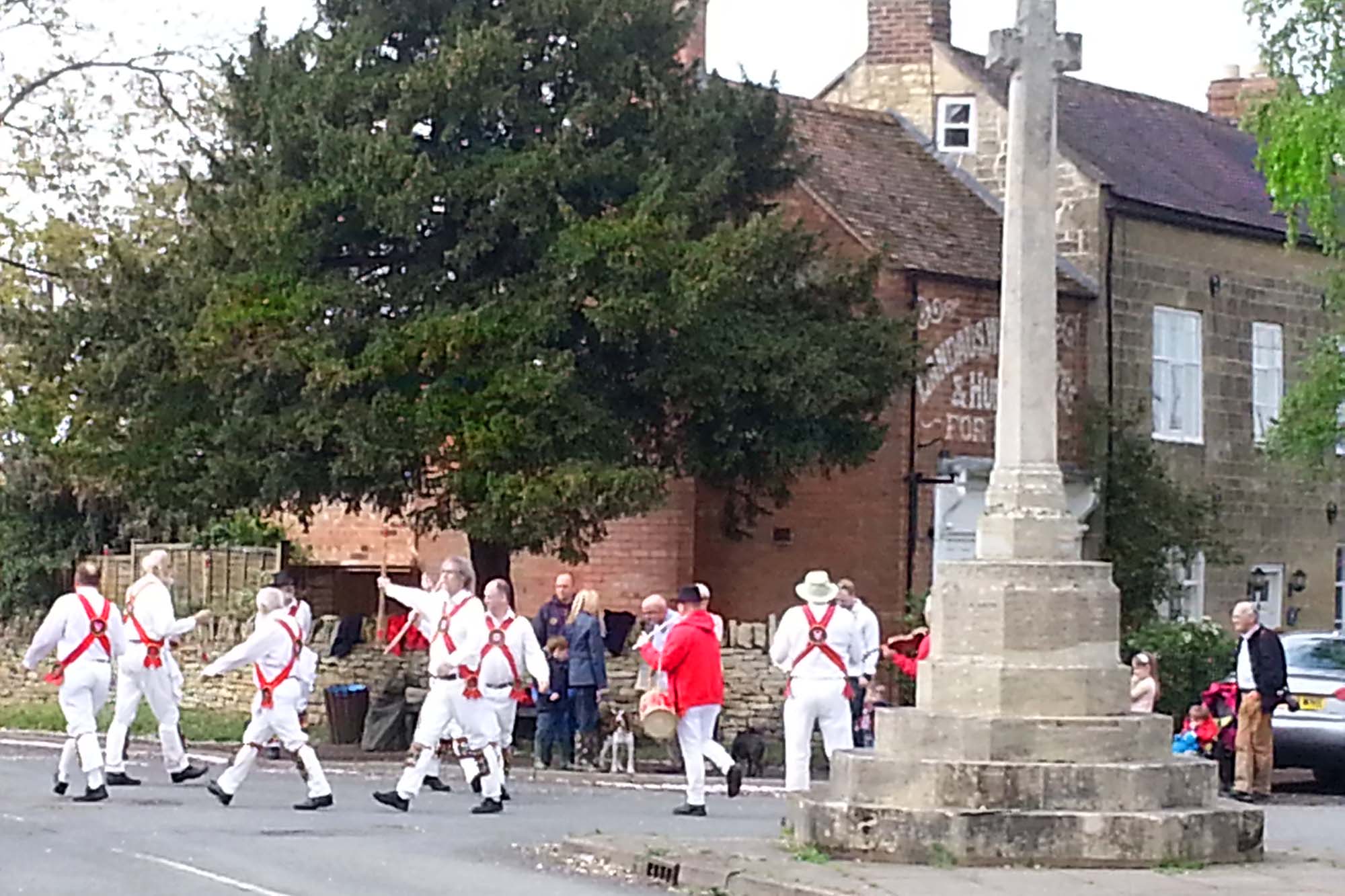 As you continue your voyage you will see examples of stone buildings, walls and gateposts built with the local limsteone. The best examples of such stone buildings can be seen in the villages of Overbury, Kemerton, Westmancote and Bredon. The local limestone was used for the walls, but finer quality stone, that could be more easily carved than the local limestone, was used for the lintels of windows and ornamentation. It was brought into the area from quarries as far away as Bath. The War Memorial in the centre of Kemerton Village for example, was constructed from a durable limestone from Box Quarry, Minchinhampton and Pea Grit from Leckhampton, Gloucestershire. 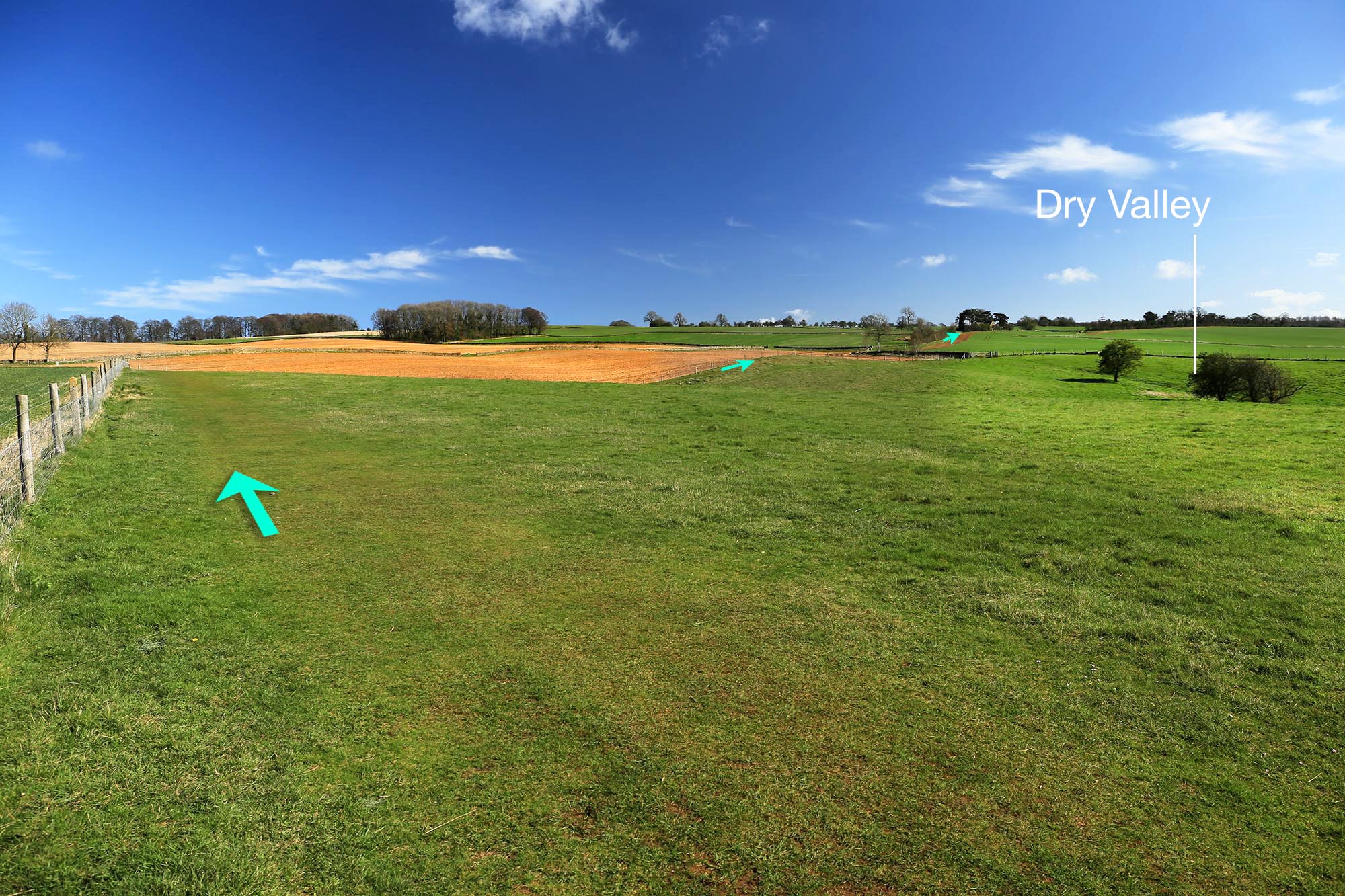 The dry valley to your right is the subject of Task 4.

Bredon Hill is an