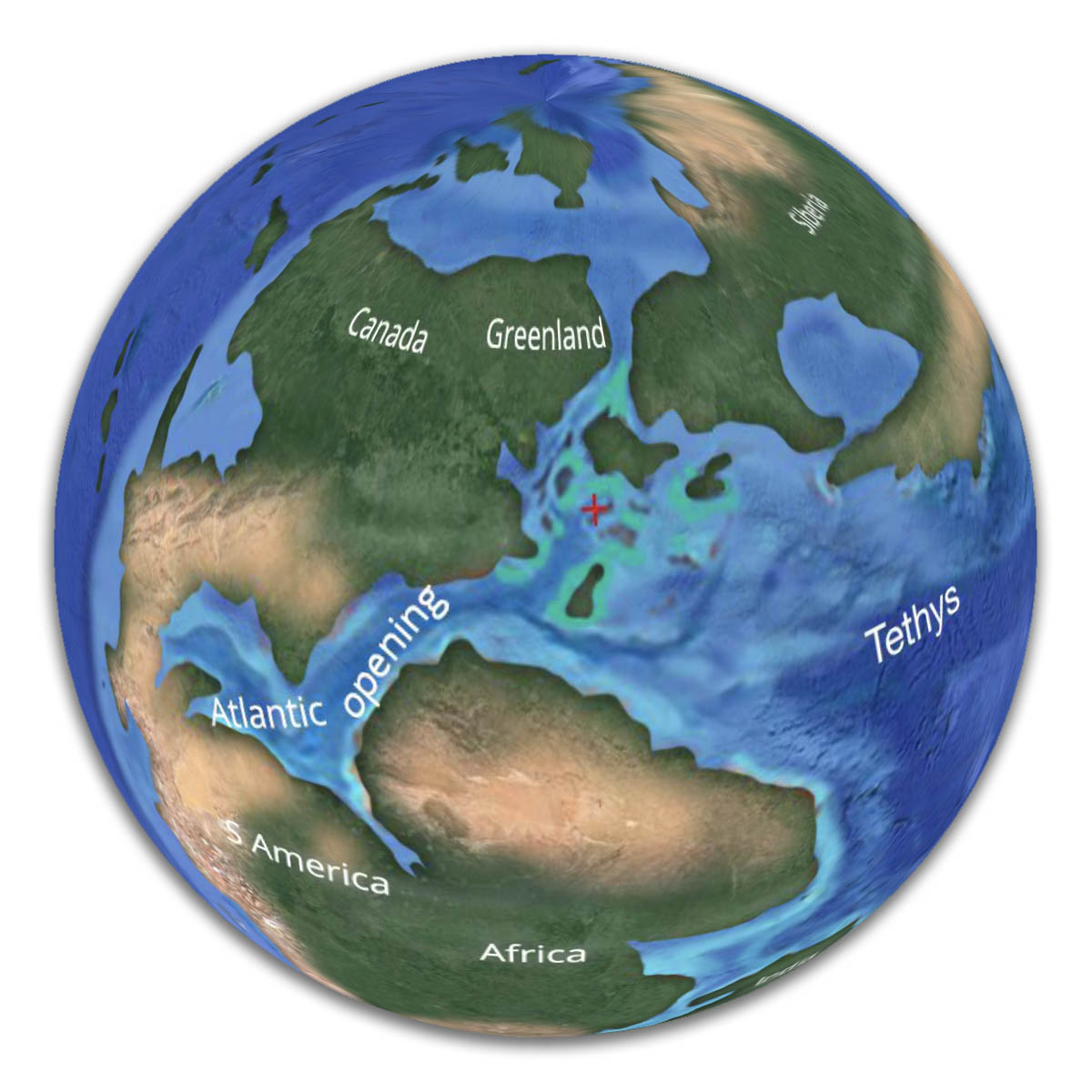 The location of Britain is marked by the red cross. In the Jurassic the area was a collection of islands bathed by the shallow warm sunlit seas of the western edges of the Tethys. If you could avoid the Jurassic beasts and cope with an atmosphere with a little less oxygen, it would probably have been a very attractive place to explore with warm azure seas teaming with life, a maze of islands  clothed in lush conifer forests, a warm humid climate with a winter wet season and occasional severe storms – cyclones.

Today we look west to a major ocean, but in the Jurassic what was to become the Atlantic Ocean was only starting to form as plates split apart. The mighty Tethys lay to the south east and  was likely to have been a key factor in determining the climatic conditions of this part of the planets surface. The location that would in our time become Bredon Hill was, in the Jurassic, around 45 degrees north of the equator, today it is around 52 degrees north, as the Eurasian plate continues to nudge northward.

In the Jurassic the Bredon Hill area was essentially a marine environment, with some areas occasionally forming islands. So given the Bredon Hill area today is well above sea level, does that mean sea level was a lot higher here in the Jurassic? In the earliest Jurassic times global sea level appears to have been slightly lower than that of today, but as the Jurassic progressed it became around 75 metres higher, with lots of ‘short’ term ups and down superimposed on the longer term trend. Therefore, sea level change by itself cannot explain the marine conditions of the area in he Jurassic. The main reason will lie with changes in the regional elevation or depression of the crust over time, In time scales of millions of years crustal vertical displacement can occur in response to regional compressive or tensional forces. This of course is superimposed on the larger scale horizontal movement of large areas (plates) of the planets crust.

Over the time the rocks of Bredon Hill were being deposited, the crust in this region was subject to tensional (pulling-apart) forces, associated with the rifting of the crust to form the future Atlantic Ocean. These forces caused the rocks of the area to sag into basinal structures aligned along old north-south orientated faults in the more ancient deeper rocks (Permian and older). As sediments accumulated on the sea floor further slippage on the faults deepened the basins so the build-up of sediments continued to thicknesses of hundred of metres in some cases. Deeper water is usually associated with the deposition of fine muds. In some locations the crust was less depressed, possibly elevated, giving rise to deposits characteristic of shallower water – siltstones, sandstones, limestones.

Today a vast area of the rocks formed from these sediments has been eroded away, leaving the odd remnant in the form of hills like Bredon. Bredon continues to erode – to ‘fall down’  and in time will be gone. The debris of its rocks scattered over the surrounding vales and carried to the sea to be deposited as rocks of the future. Erosion is slowly eating back the whole Jurassic escarpment of the Cotswold Hills, as it retreats so new ‘Bredon Hills’ will be left behind to exist for a brief time in Earth history. 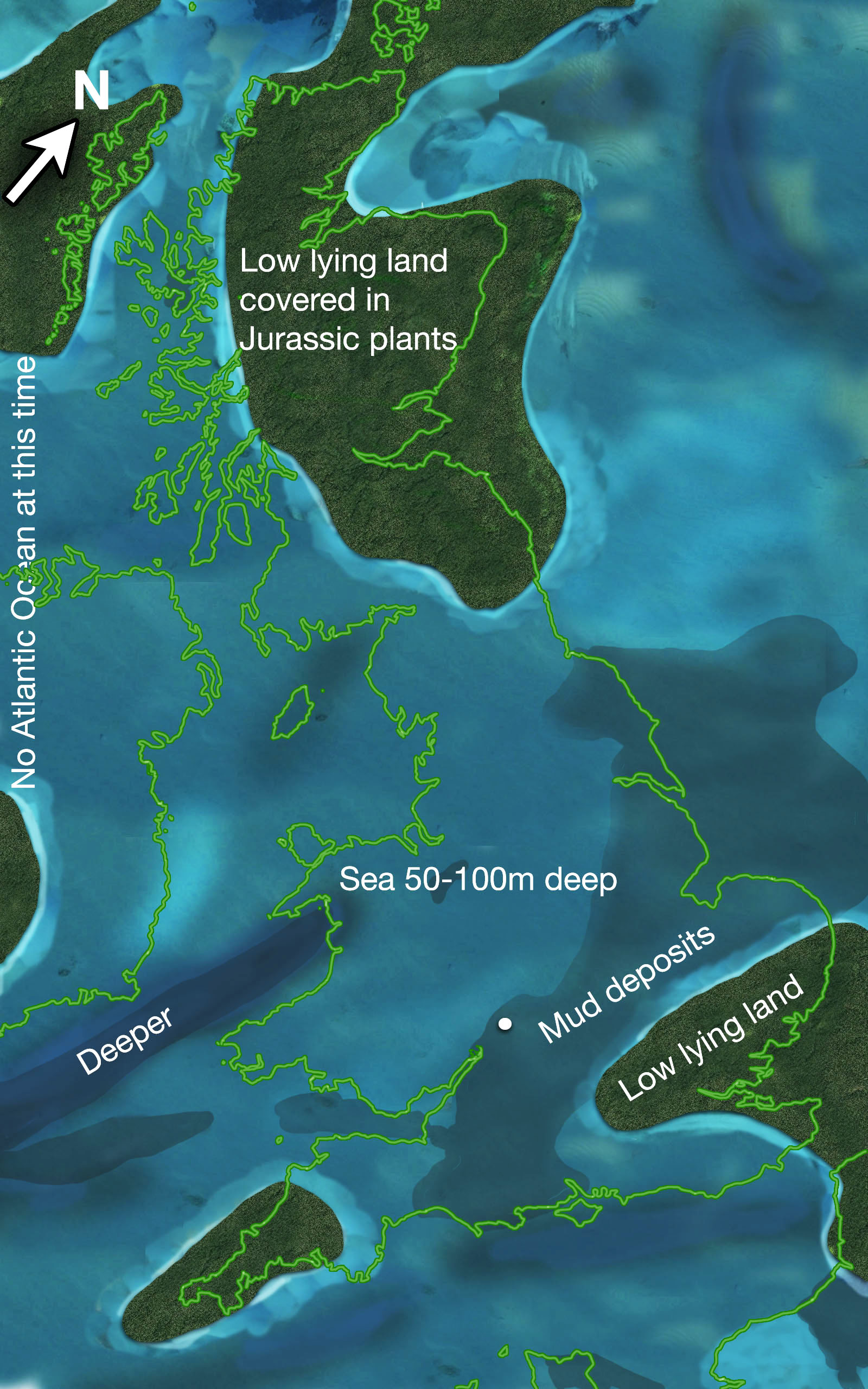 The diagram above illustrates a probable distribution of land and sea during the time of the Charmouth Mudstone (Lower Lias) deposition. Comparing this with the diagram for the younger Birdlip Limestone (Inferior Oolite) you can see a significant reduction in the marine area, In both these diagrams the white dot indicates the location of Bredon Hill. The outline of the present day British Isles is for reference only. 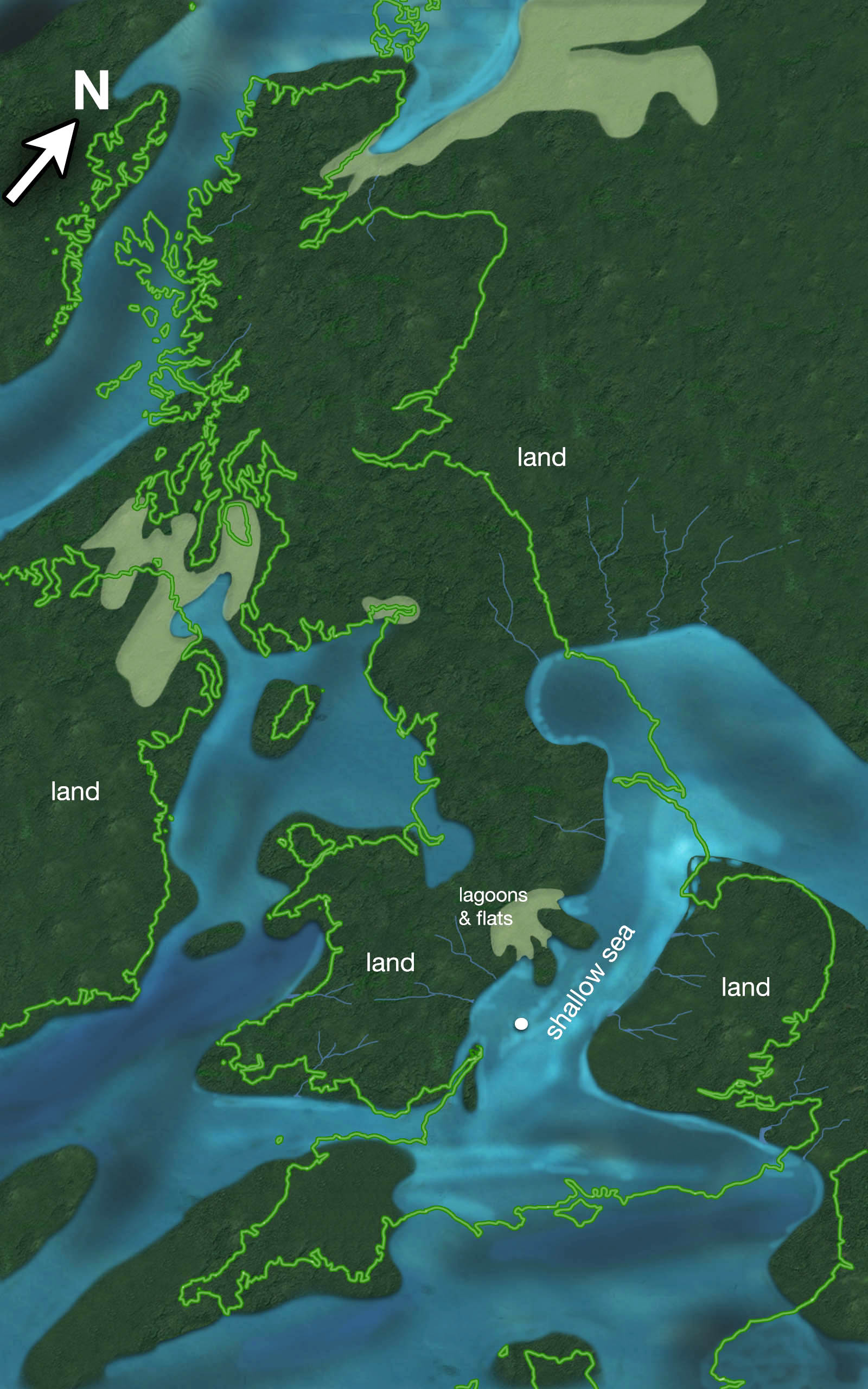 Above the general distribution of land and sea during the time the Birdlip Limestone (Inferior Oolite) was forming. The exact location of coastlines is speculative and would in any case be subject to dynamic change over several million years.

Note this section of the crust had a NW-SE orientation in the Jurassic, hence the north arrows on the maps are shown as pointing NE.