3 Rock cutting and cliff
Back to map 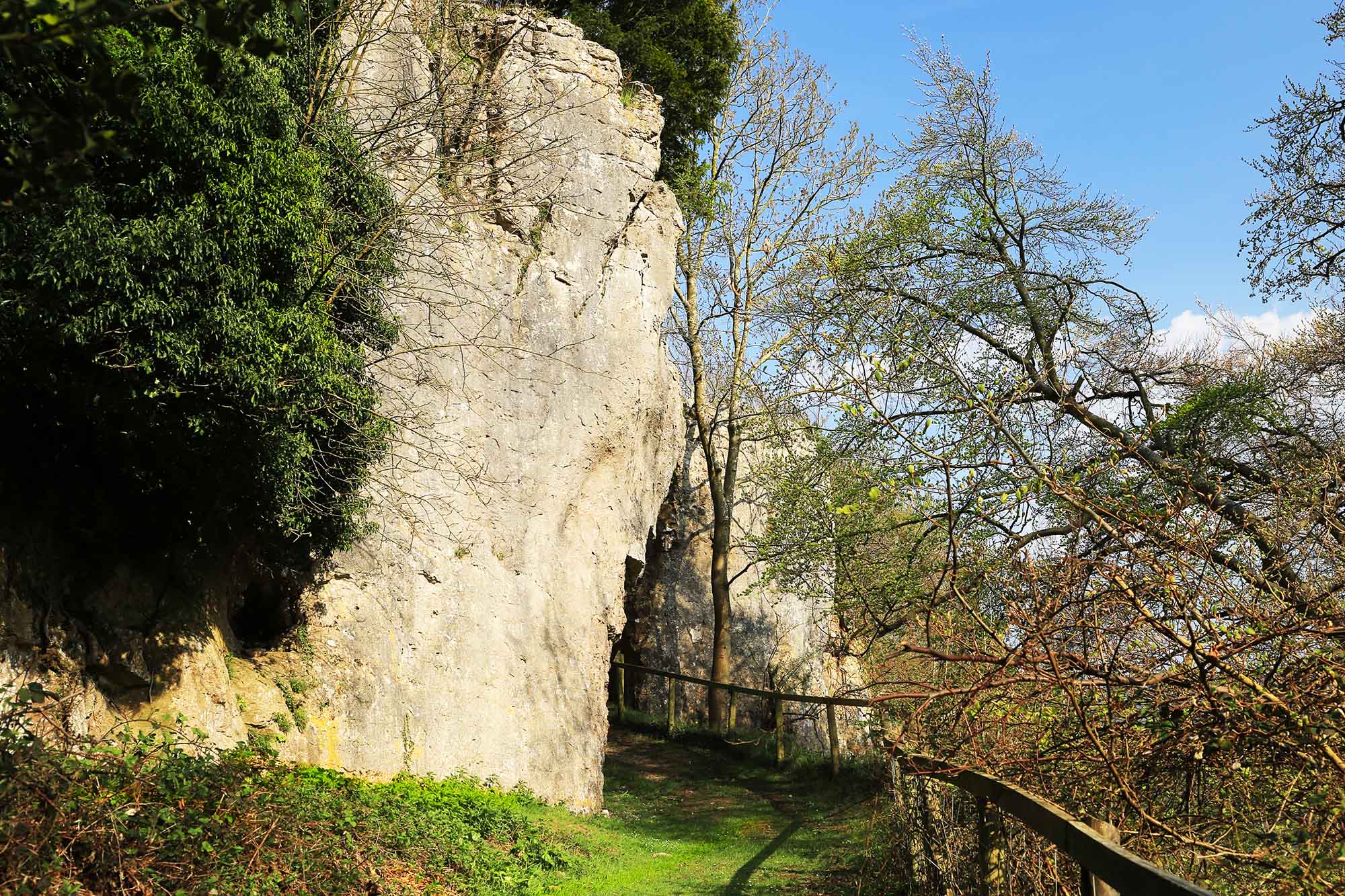 The rock cutting is not natural. It was blasted out of the rock around 1833 to form a carriageway, as part of an elaborate landscaping of the hill undertaken by the ironmaster and MP Richard Blakemore, the then owner of the Wyastone Leys estate and Deer Park. His activities caused much damage to this Iron Age hillfort site.

You are still on Gully Oolite limestone. If you look hard you may find fossil fragments of crinoids and brachiopod shells, but you won’t easily find any so-called ooids. ‘Oolite’ means a rock with cemented together little spherical objects called ooids, but at this location there are not very many ooids visible.

In other places the Gully Oolite lives up to its name (see next picture). Today ooids are forming in the warm sea water off Bermuda and seem only to form in that type of environment, so it is reasonable to assume warm clear Bermuda like seas existed here around 346 million years ago in the early Carboniferous. Does that mean the sea was a lot deeper then? This location is now about 120 metres above present sea level. You can look up ancient global sea level data under the clock (in the app). You will find the early Carboniferous was a time of high global sea levels.

Sea level changes through time due to how much water is tied up as ice sheets and the volume of the ocean basins, which change with the extent of mid-ocean ridges. Land height will also alter over time due to the effect of tectonic forces causing crustal uplift and the crust adjusting in height as overlying weight is removed by erosion or the melting of ice sheets. This adjustment is called isostatic rebound. 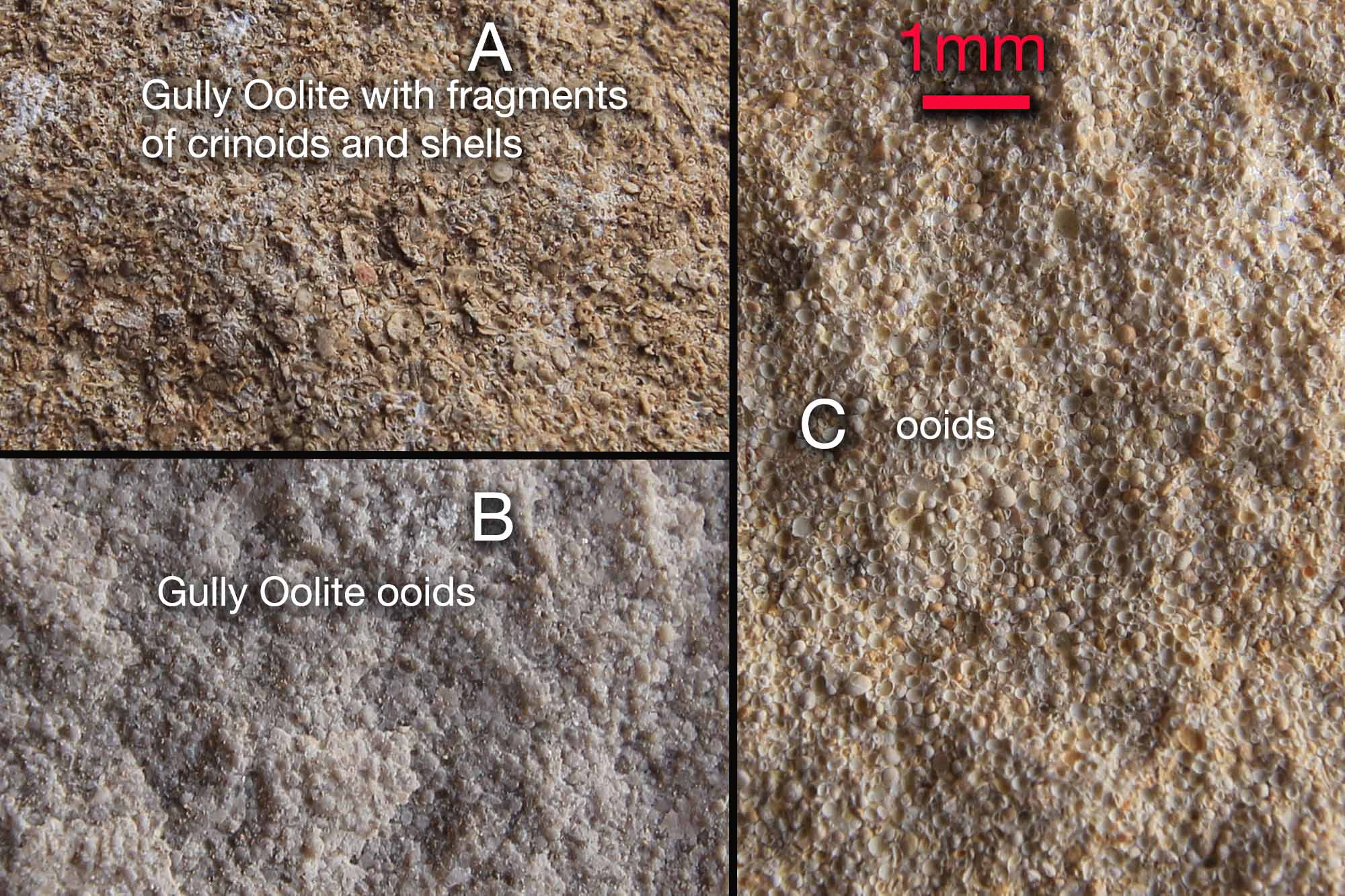 Picture A is a close-up of Gully Oolite from here. It is full of broken shells and crinoids, but no ooids to be seen!
B is Gully Oolite from another location displaying ooids and C is an oolitic limestone with very distinct ooids.

The broken up shells and crinoids indicate deposition in an area with strong wave active – shallow water in reach of the base of the waves. 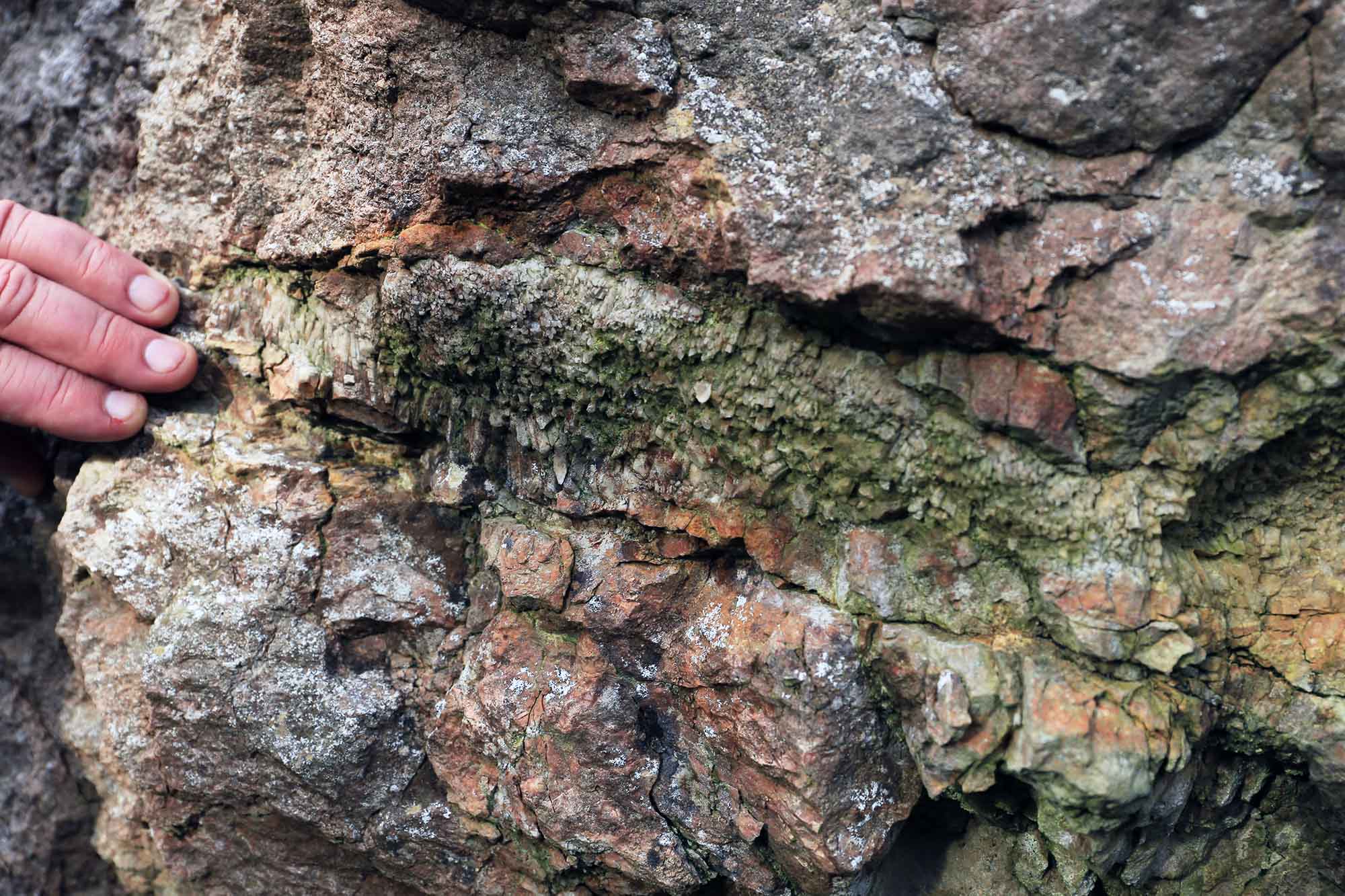 Notice how pink the rock is in places. Although this is a limestone laid down in a shallow sea, the land was close enough for some material from the land to be washed into the sea. It contained iron and that has probably given this rock the pink colour. The rock also displays some quite large calcite crystals.

Nearby land (look at reconstructions under ‘then’ for the Gully Oolite time) would have had significant Carboniferous type vegetation, the decayed remains of which would have concentrated iron compounds. 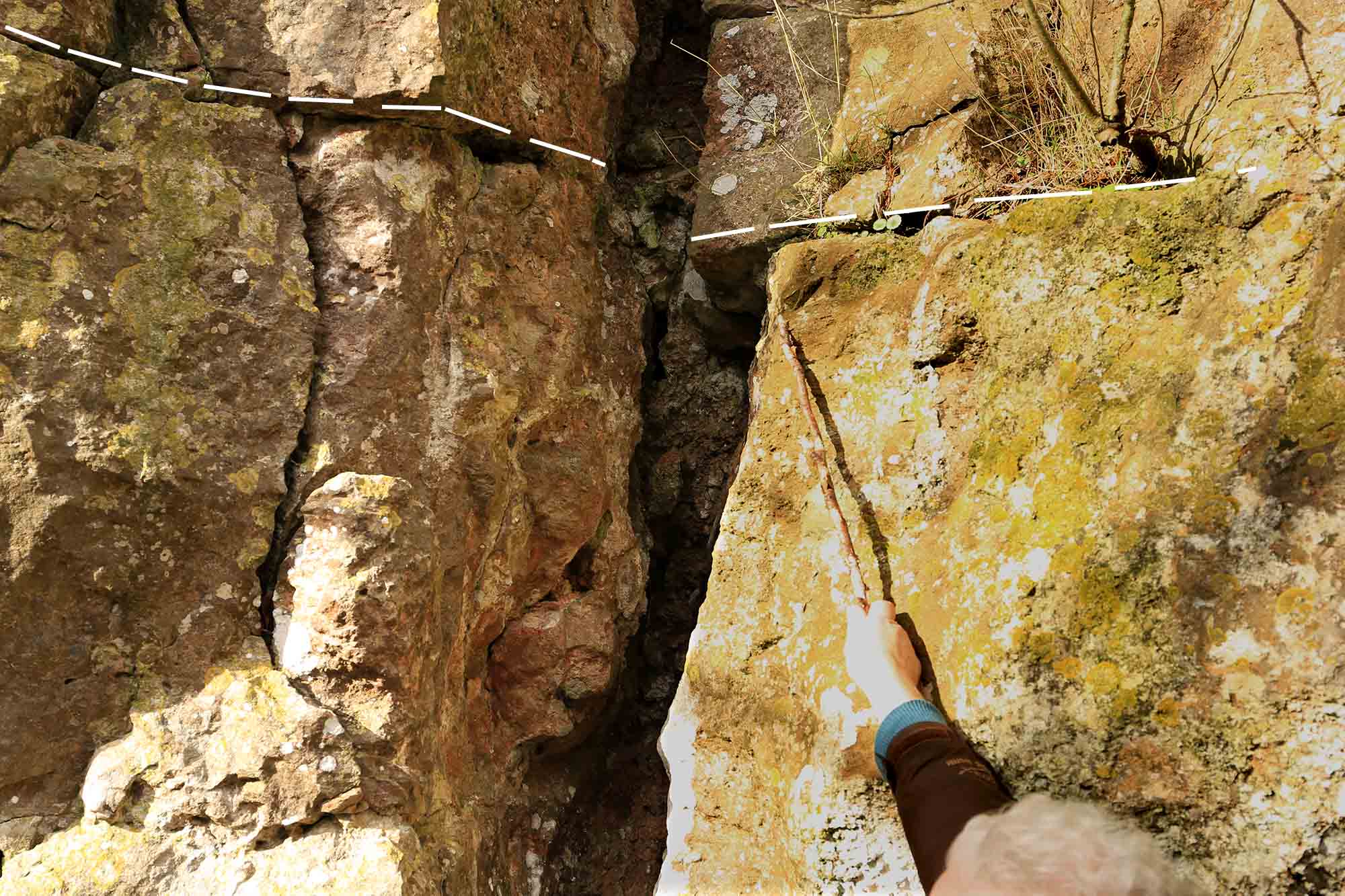 Movement in the rock

Stand where there is a thin vertical fissure, just before the point where there are rocks on the right hand side of the path, before the bend in the path. You see about half way up the rock face that the beds do not match up?

This is a small fault where either the beds on the left have been pushed up or the beds on the right have dropped down. It probably formed at the time of the Earth movements that tilted the rocks.

The main earth movements that tilted the rocks are known as the Variscan Orogeny (mountain building event). The Variscan Orogeny occurred over a period of many millions of years around the end of the Carboniferous (300Ma) and was caused by what we now call Africa pushing into southern Europe. 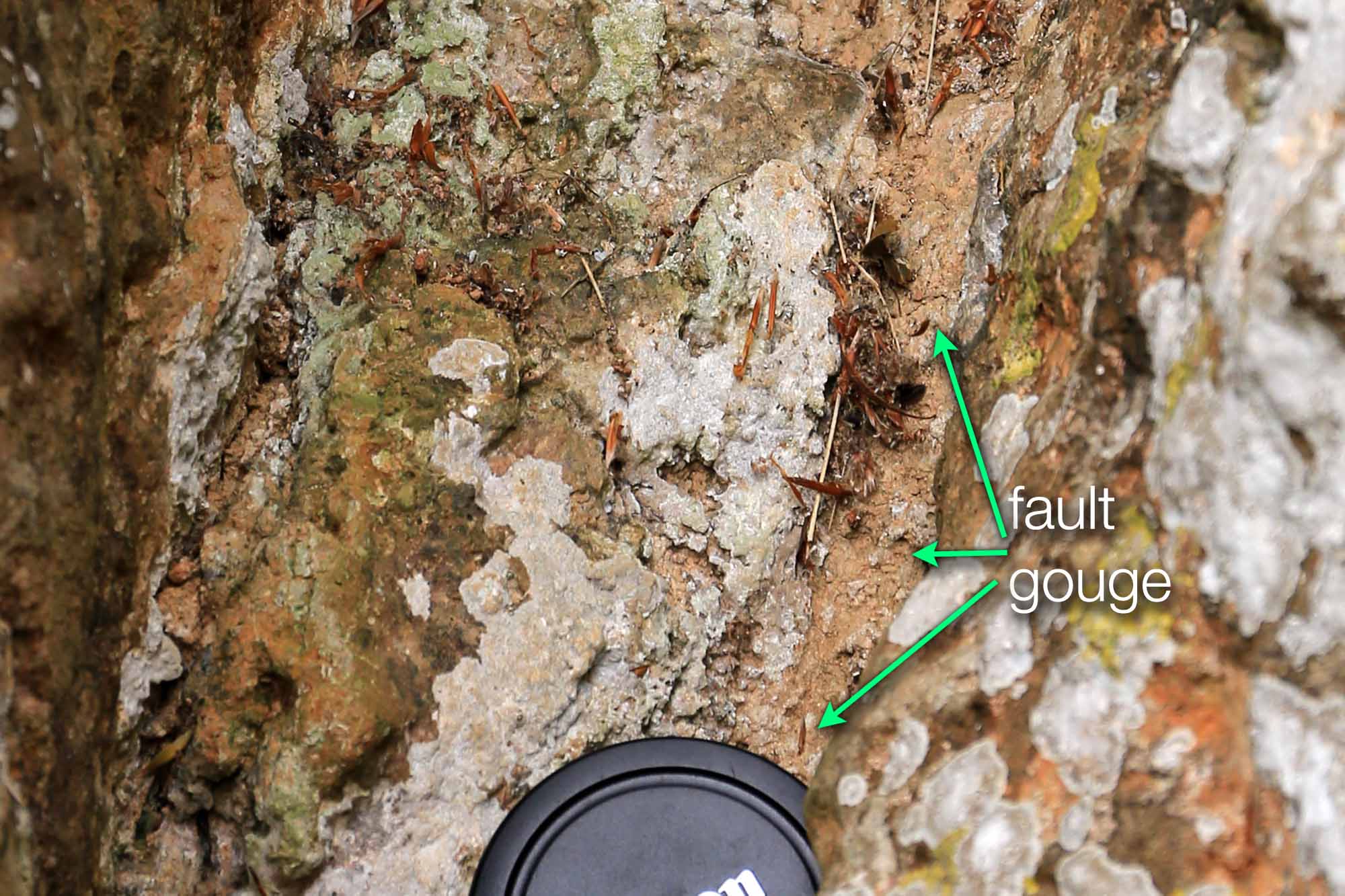 Along the fault plane (that is, in the vertical gap where the movement has happened) you can see a soft clay-like material.This is ‘fault gouge’ – rock that has become crushed to tiny clay-like particles as the rocks dragged past each other along the fault plane. It could also be called ‘fault breccia’ if in places it still has big enough bits of broken rock present. 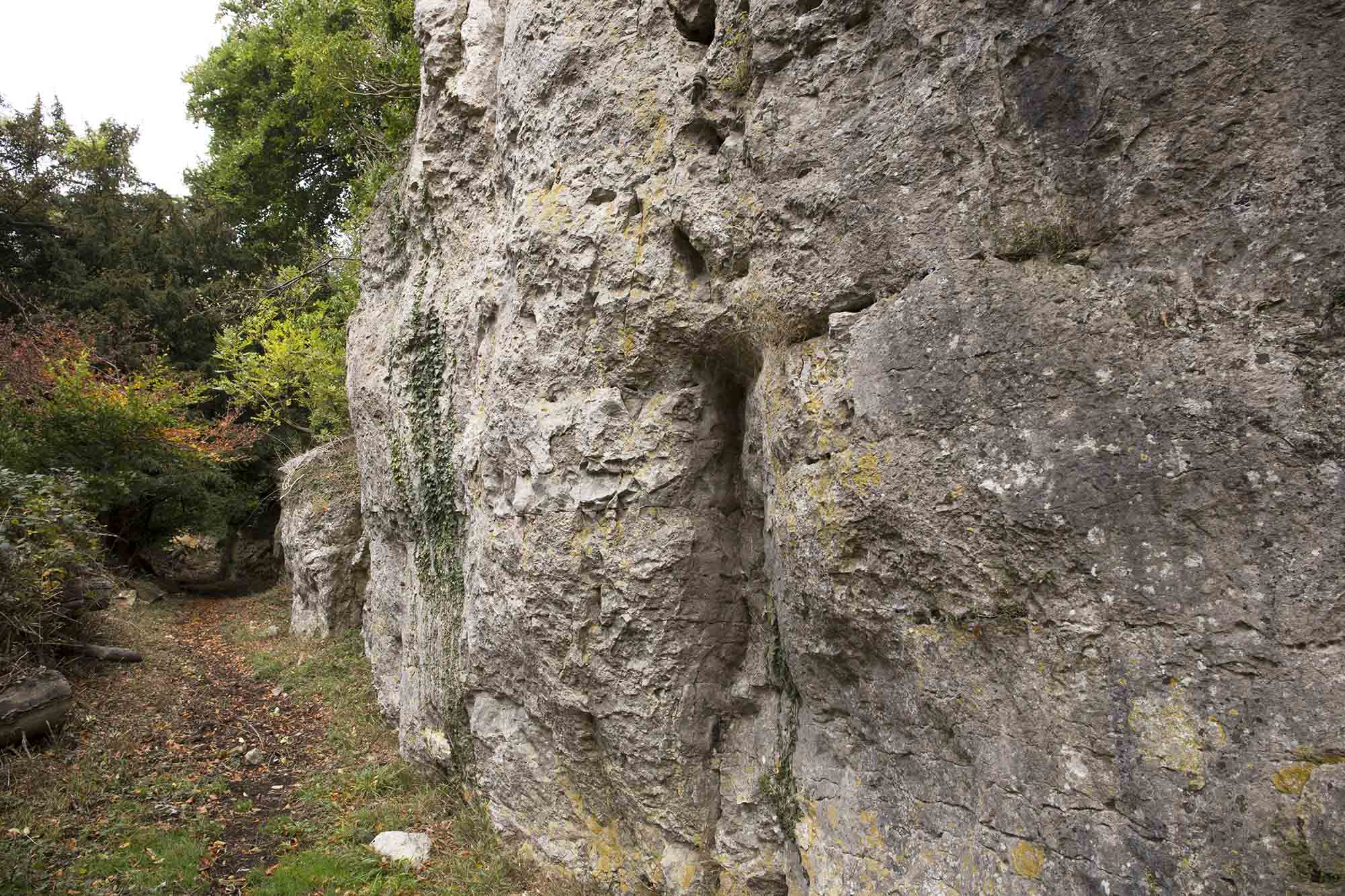 Above the path branching off uphill from point 3, is this cliff of Gully Oolite. Any evidence of ooids or fossils?

How warm do you think the sea water may have been when this limestone was forming here around 350 million years ago? 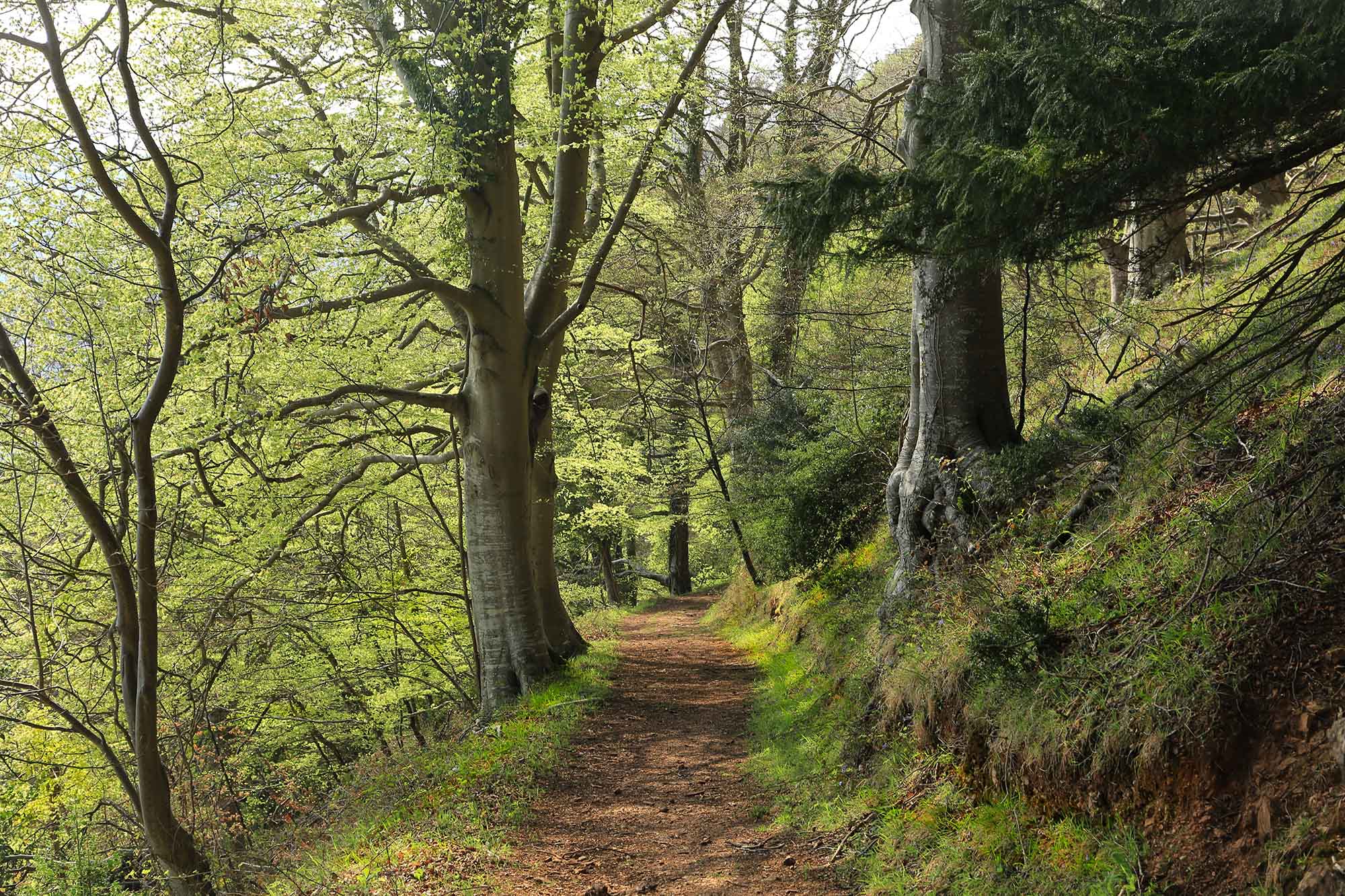 Take the path heading down through the woods to reach Task Site 4. As you go you should get an ‘Environment Change’ as you move back onto the Black Rock Limestone from the Gully Oolite.

The fissure in the rock here is: