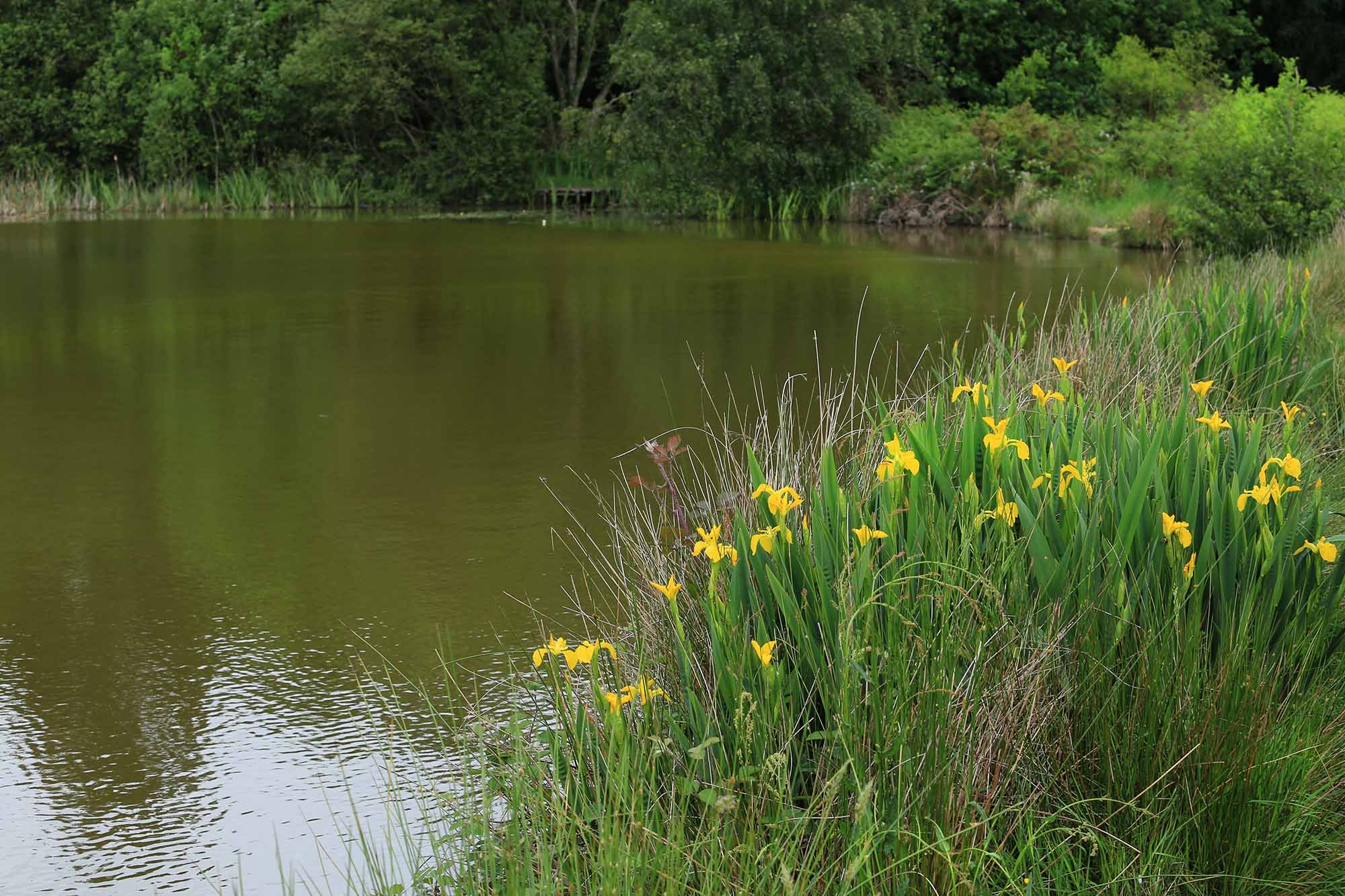 We are now on a flat area, where the ground is marshy and two large ponds exist, that are popular with anglers. Moving from the well drained ground we were on previously to this, must mean some significant change has taken place beneath.

Use the Map to find out about the age and type of rock that is beneath this location. You have now moved onto the start of the coal bearing rocks of the Carboniferous. Around 307 million years ago, this place would have been very close to, or on the equator, it would have been hot, humid, the air full of very large insects (like 75cm wing span dragonflies). To the south would rise the Variscan Mountains (around the location of NW France of today) and fast flowing braided rivers would carry large quantities of sediment northward as erosion attacked the newly raised land surfaces.\ The rocks you have crossed so far in the Voyage would have been folded by the forces of the Variscan Orogeny (mountain building event), produced by the the massive Gondwana continental plate closing any remaining ocean between it and the southern edge of Laurussia (where this area was located). You have seen this folding in the steep westward dipping rocks at sites 2 and 4, and you will see it again at sites 10 and 11. In the Wye Valley Voyage you see the rocks coming back up on the western side of this big fold that underlies the Forest of Dean. The Variscan Orogeny folded the rocks of the Forest of Dean, South Wales, the Mendip Hills and thrust up the Malverns, amongst other influences across southern Britain and Ireland. The Trenchard Formation rocks are therefore laid on an eroded – former landscape – of older rocks, with a time gap not represented by any rocks, either because none were deposited, or if they were they were removed by erosion. This situation is called an unconformity. 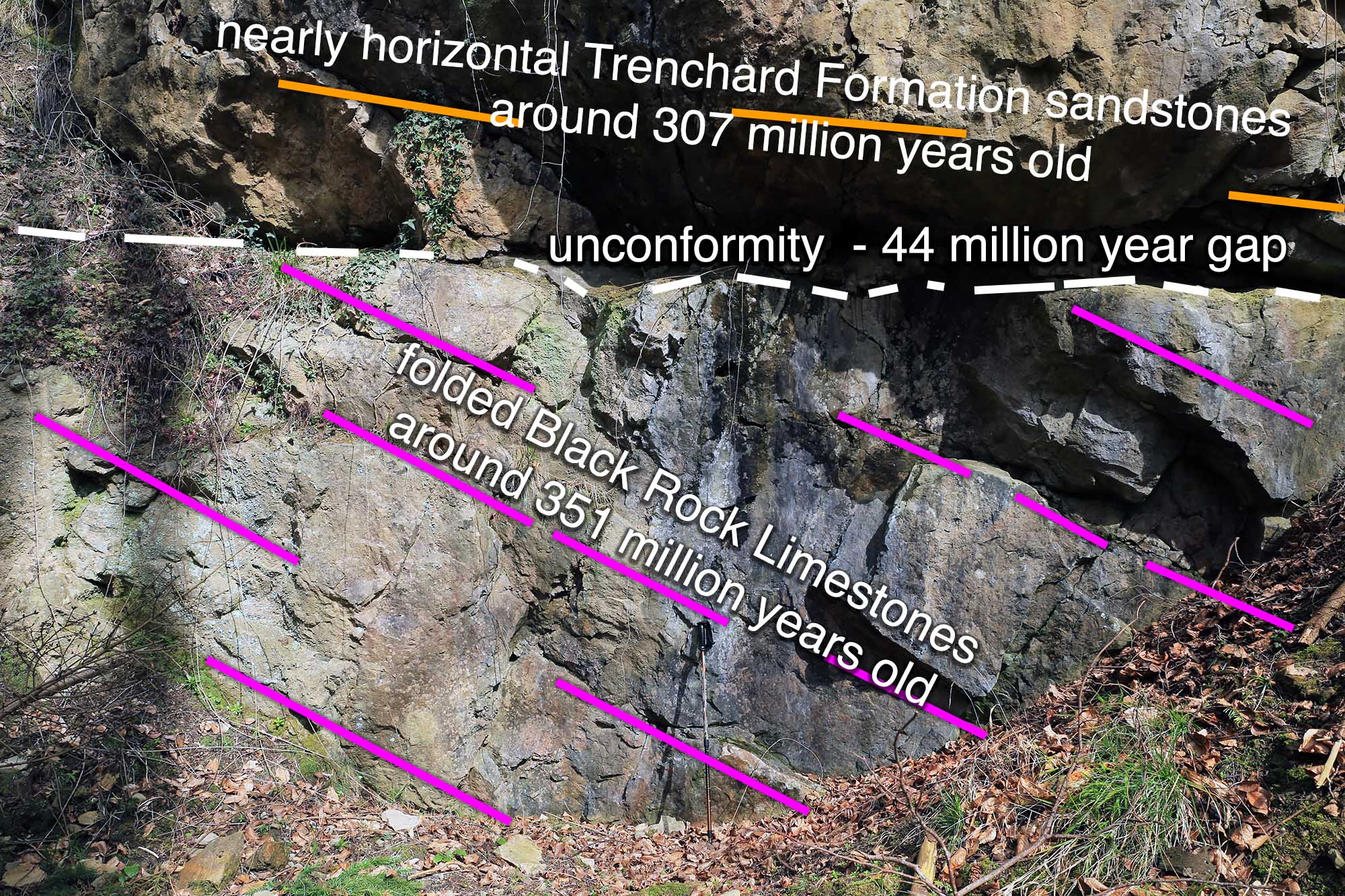 View of the unconformity where Trenchard rocks sit on older rocks, which have been folded by the mountain building event called the Variscan Orogeny. This occured when the massive continental plate of Gondwana pushed up against the southern edge of the Laurussia plate (where this area lay), wiping out any remaining Rheic Ocean and building a great mountain chain to the south, in the area of what today is NW France. The unconformity is buried at the site of the ponds, the view above is from a small quarry near Mallards Pike Lake.

Both the pre-Trenchard rocks and the Trenchard rocks themselves were all folded by a later phase of the Variscan Orogeny. Orogenies occur over many millions of years, with phases of activity and calm as the great tectonic plates of the Earth’s crust move closer, move apart, rotate, grow in size or become consumed under an overriding plate. 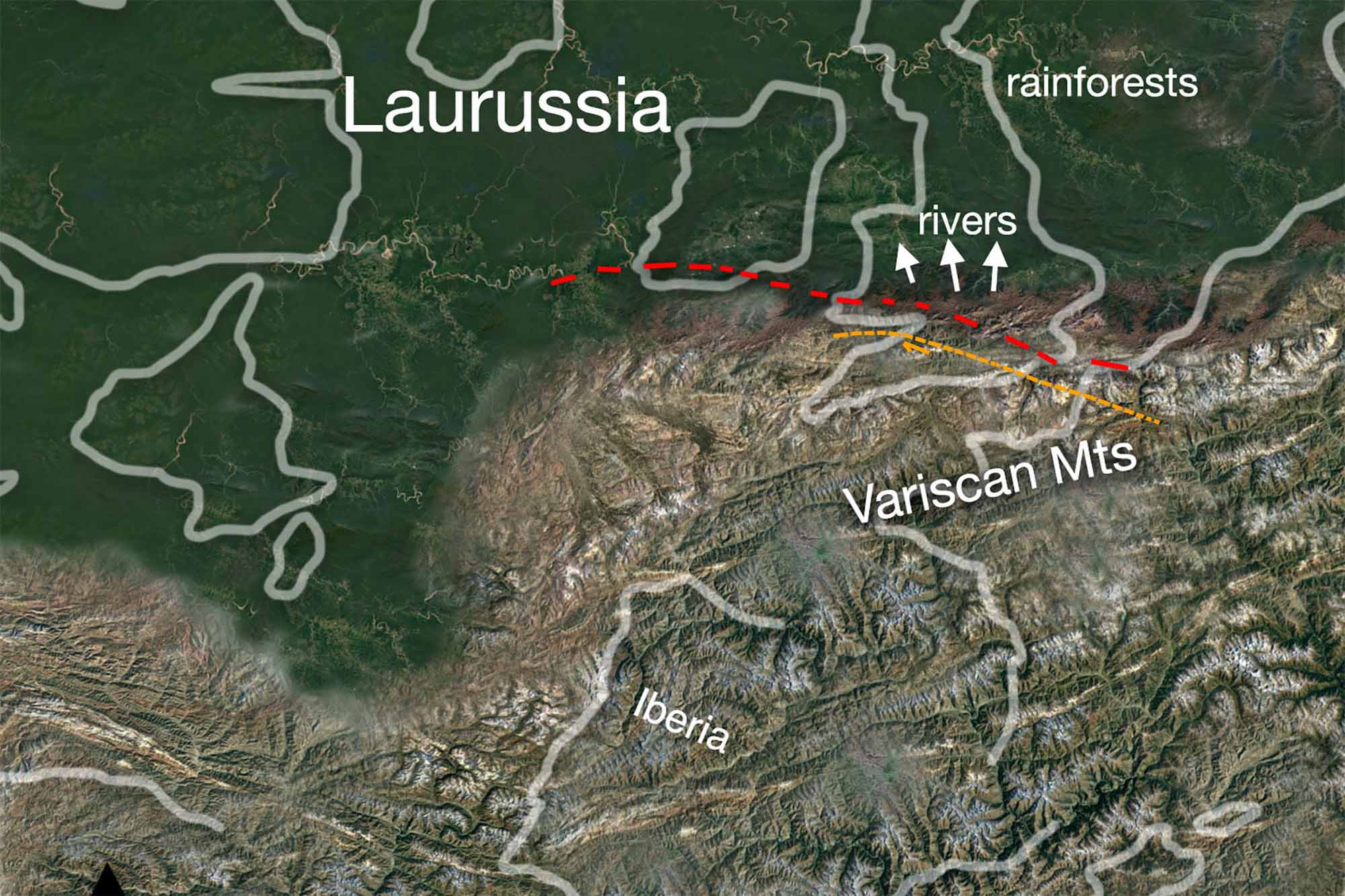 Aftermath of the orogeny

The scene after the main impact of the Variscan Orogeny, when the Trenchard started to be deposited around 307 million years ago. Climate dominated by monsoon rains over Variscan Mountains to south. No lack of rivers charged with sediment as all the recently raised land surface was being worn down by erosion.

he Variscan Mountains would have towered many kilometres high, every bit as imposing as the Himalayas of today. The range extended from southern Europe into America (no Atlantic then). Only southern Britain felt the forces of the orogeny, where the rocks of the Forest of Dean, South Wales all the way into Pembrokeshire, the Mendips area, Devon and Cornwall and the Malverns Hills, were all folded and uplifted in various ways. The approximate limit of the Variscan Orogenic influence on the rocks of Britain – the so called Variscan Front – is shown by the dashed red line. The area we now call Devon and Cornwall was also sliding into place at this time (probably by a few centimetres per year), from its former location about 400km to the south east. The motion was by sideways (strike-slip fault) movement along the major fault system known as the Bristol Channel Bray Fault – orange dashed line on picture. Bray is taken from Bray-sur-Somme in northern France, where the fault system passes beneath.

Which type of rock is likely to be dominant beneath this location?