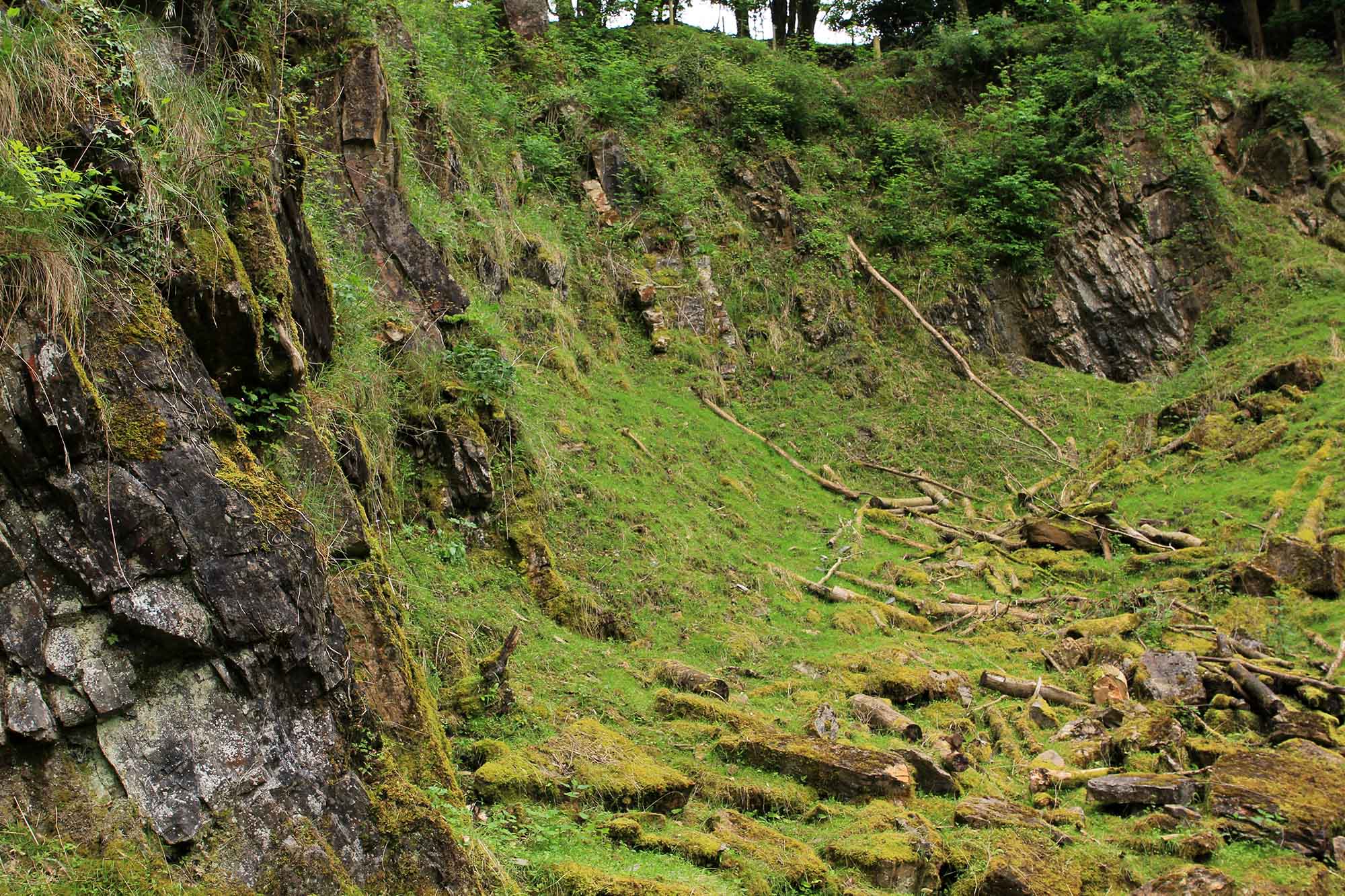 The rock here looks very different from what we have seen so far on the Voyage. The red colour is replaced by grey. Close up the rocks don’t look like sandstone.

The rock beds here show the same very steep westward dip as the Wilderness Quarry. Remember, as we travel to the west in the Voyage you move onto younger rocks. The rocks here are called the Avon Group (the old name for them was Lower Limestone Shales) and they are around 50 million years younger than the Brownstones of the Wilderness Quarry. They are called the Avon Group as their reference exposure is located in the Avon Gorge, Bristol. The Stenders (Wilderness Cement Works) Quarry opened in 1894. It closed after World War I (1918) when the German-made machinery could not be repaired. The site is now a Gloucestershire Wildlife Trust Nature Reserve.

The seas come in 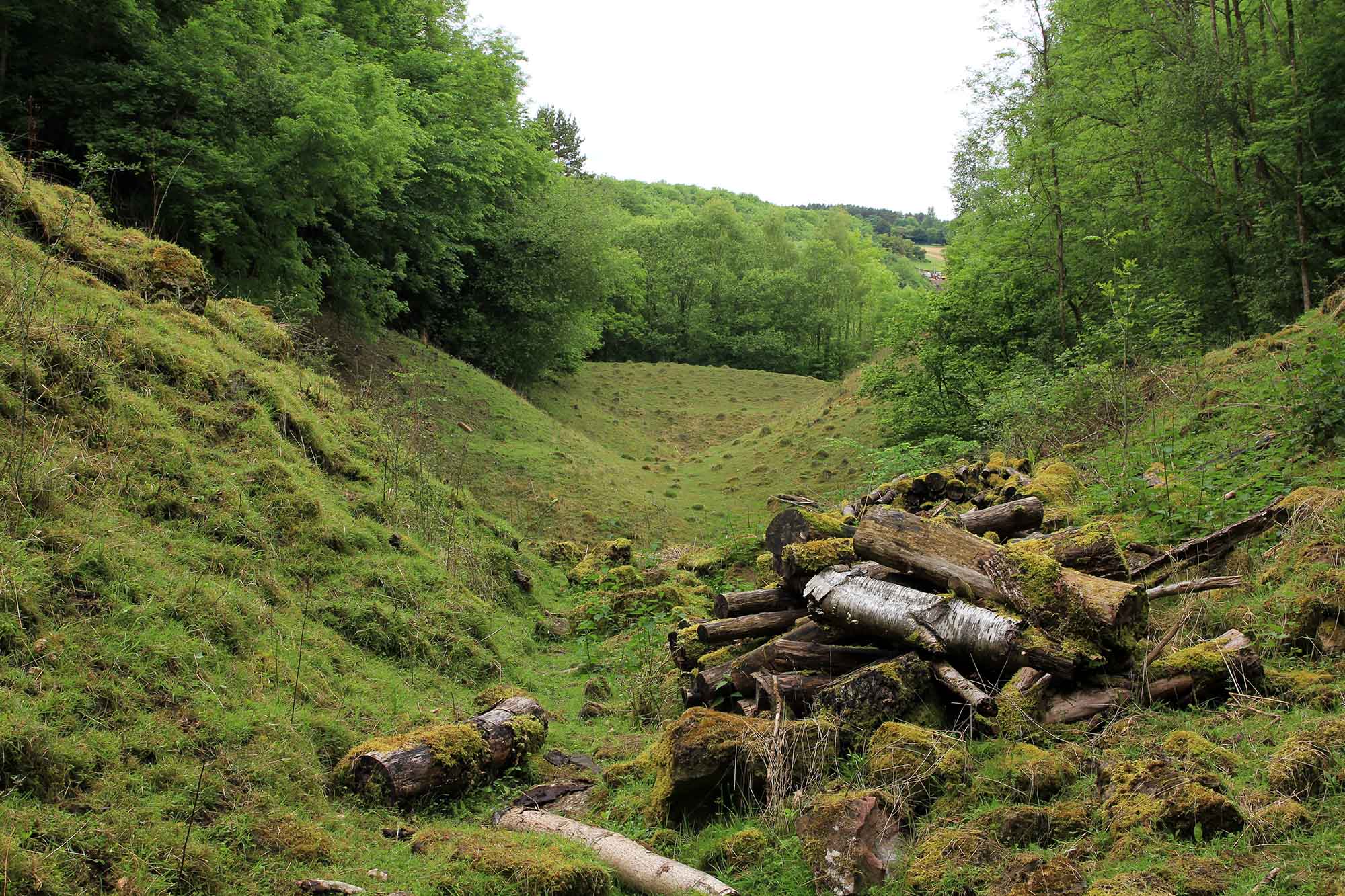 The now abandoned quarry is quite narrow, but long in a north south direction. Is there a reason for that?

The map shows this quarry to be located in the Avon Group, which are mainly limestones. The limestone extracted from this quarry was carried by an overhead tramway to a factory on the opposite side of the road, where it was used to manufacture cement. The only rock the operators of this quarry were interested in was the limestones of the Avon Group, so the quarry developed along the narrow north south outcrop of these rocks. 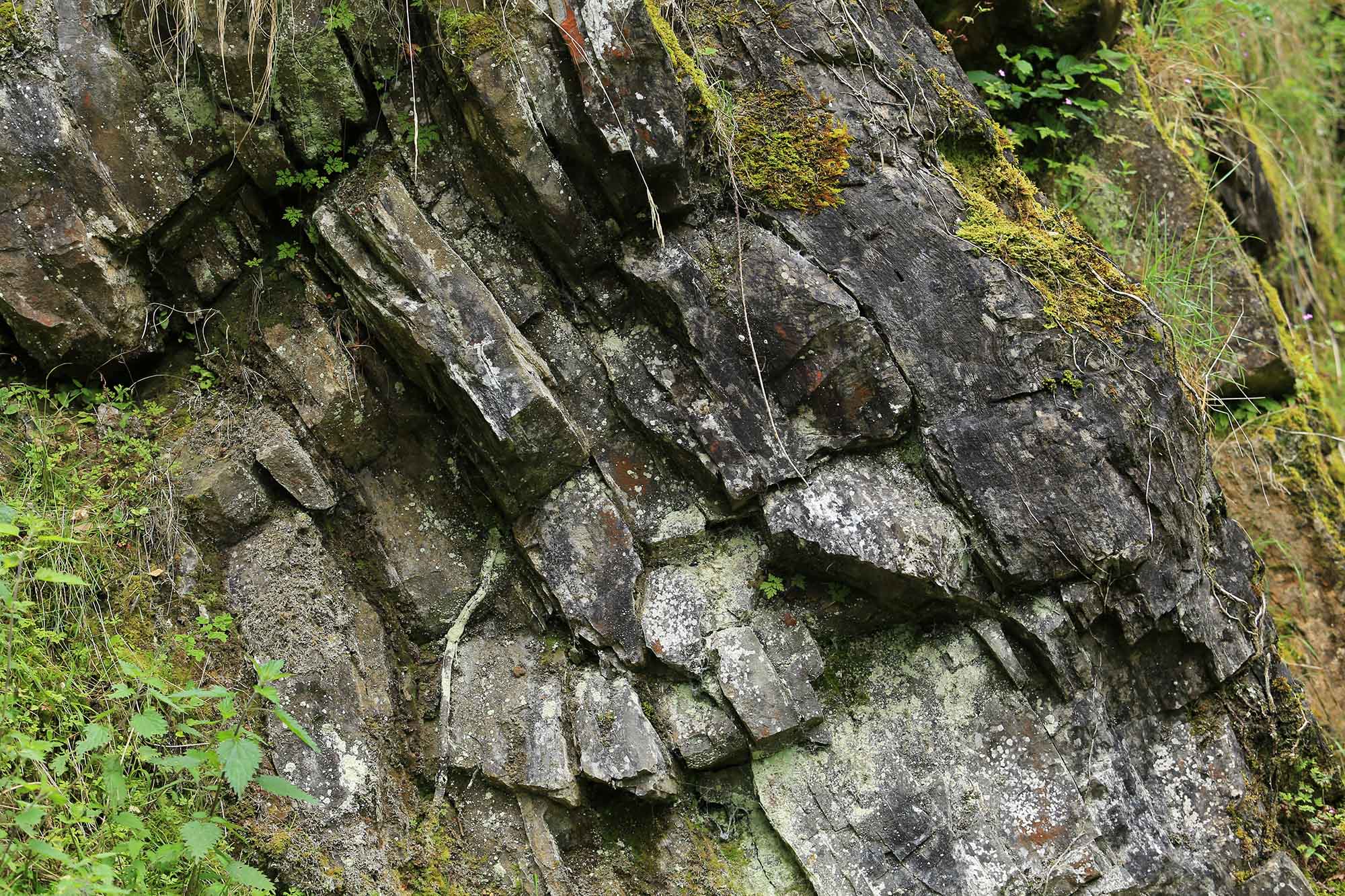 The sea has come in

This rock does not look like, or feel like a sandstone. It is hard and if a drop of weak acid is dropped on a clean surface, it fizzes strongly. This chemical reaction indicates the existence of calcium carbonate, that reacts with acid to give off carbon dioxide. These rocks are limestones. They tell of a very different environment from that of the rivers and flood plains of the older Brownstones and Quartz Conglomerate. 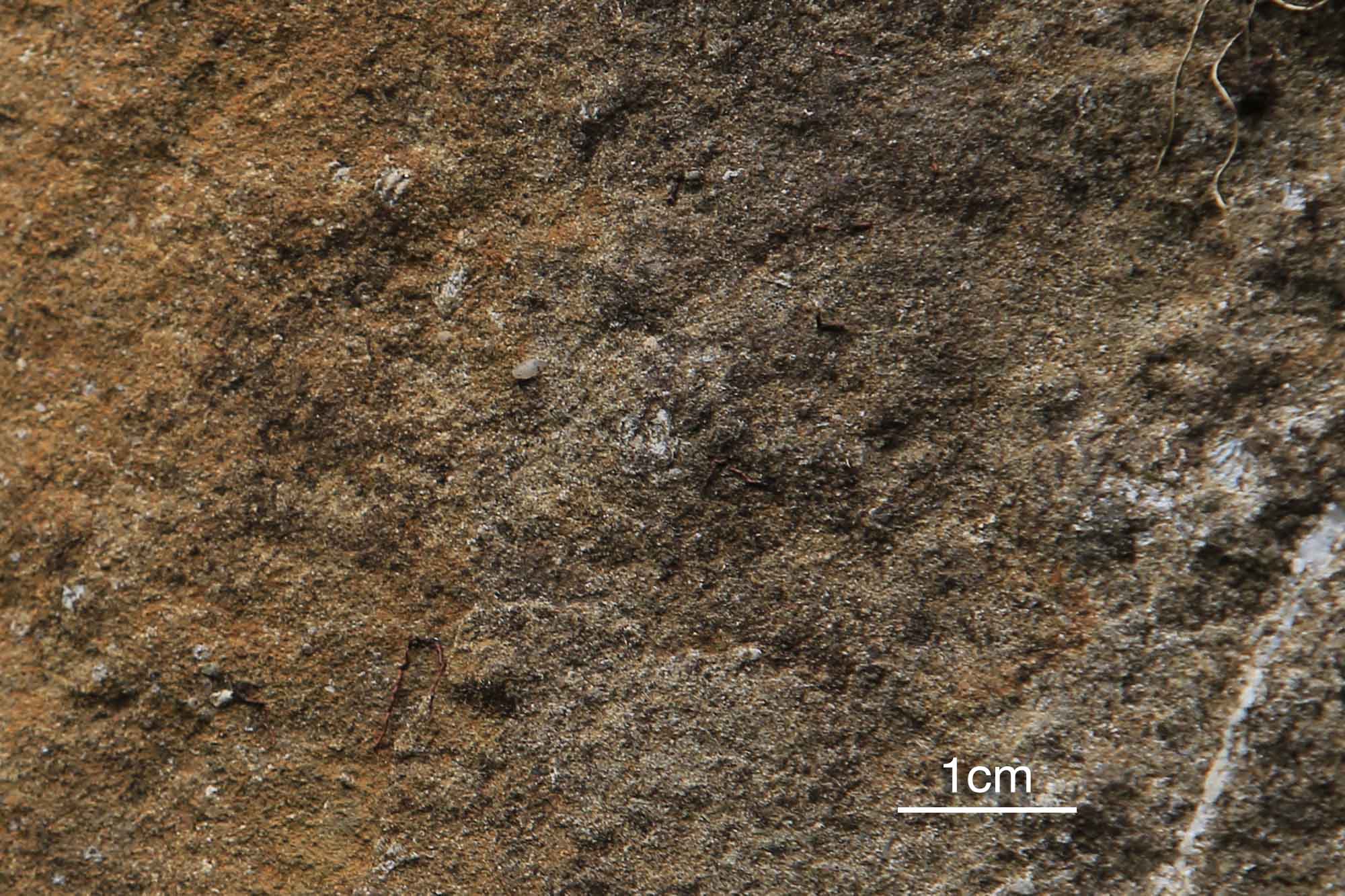 Up close some of the rock in the quarry has the appearance and texture of a sandstone. These rocks represent a transition from terrestrial (on the land) to marine conditions.

Some of the beds are sandstones, others mudstones and impure limestones. The change from terrestrial to marine conditions – a so called transgression by the sea – will happen over millions of years. There will be periods when the marine conditions might retreat (a regression). If you were alive on the Earth at such a time, you would not really notice any change to the coastline and the day to day rise and fall of the tides, it all happens so slowly for ‘human time’. 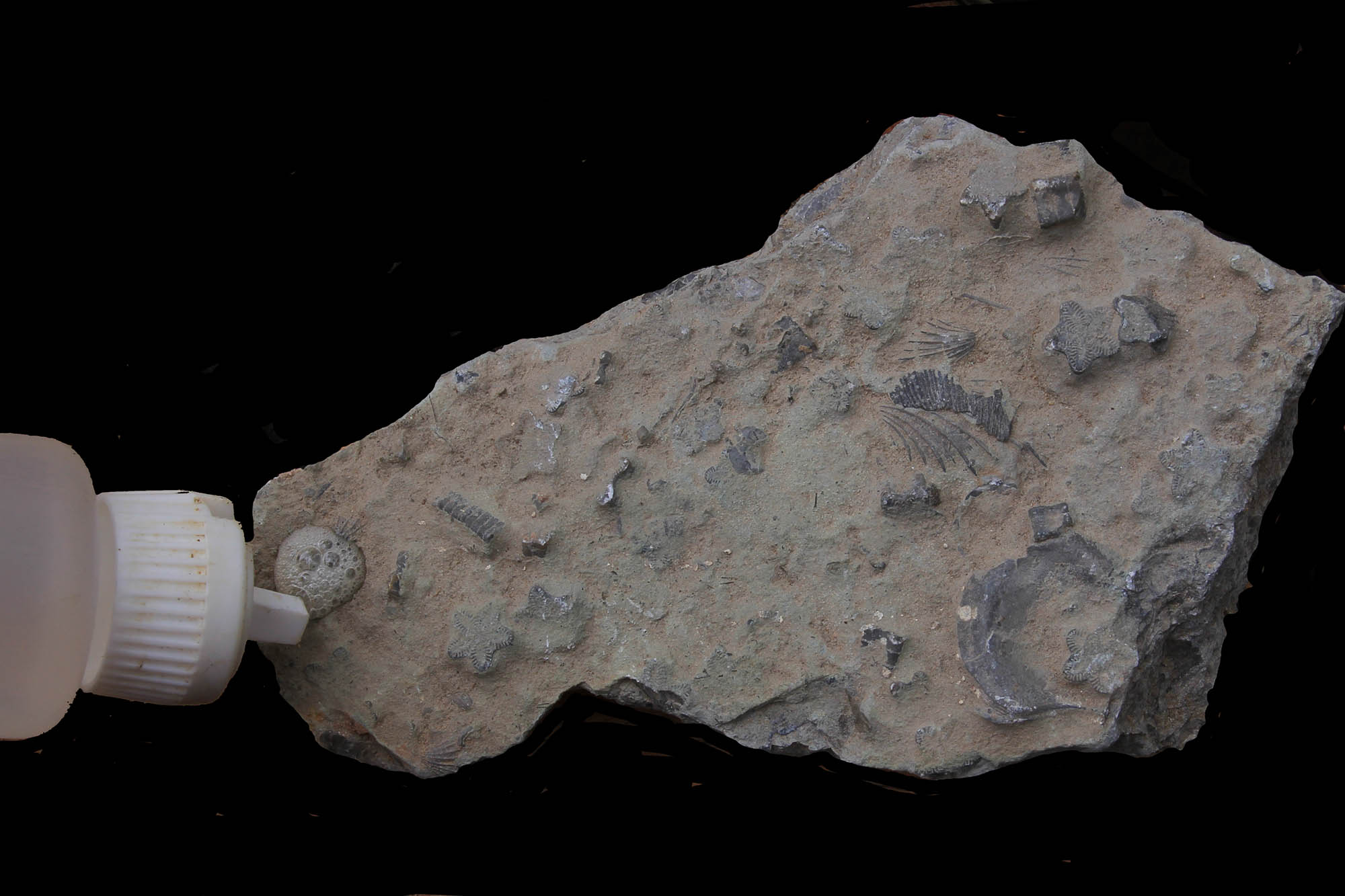 A fossil rich bed. Many of the fossils in this rock from the quarry, are sections of Crinoid stems (the star shapes) and Brachipods. A drop of weak acid reacts with the rock, producing bubbles of carbon dioxide, indicating the presence of calcium carbonate.

Crinoids first appeared in the Middle Cambrian (around 500 million years ago) and flourished widely in marine environments before becoming largely extinct in the Permian. Crinoids were marine animals with a long flexible stem anchored to the sea bed (check out ‘then’ for the Avon Group rocks). The top of the stem carried a cup like structure with radiating branching arms used to catch passing creatures. They are often called sea lillies due to their similarity in appearance to lilly plants. The part of their bodies we find most as fossils are sections of the stem. Brachipods are marine animals with a hard shell – which is the part we find fossilised. Brachipods were abundant from around 545 to 248 million years ago.

Which are possible causes of sea level rise?
A) melting of ice caps
B) increase in size of mid-ocean ridges
C) subsidence of land level

What was the latitude of this region when the rocks here were being deposited ?