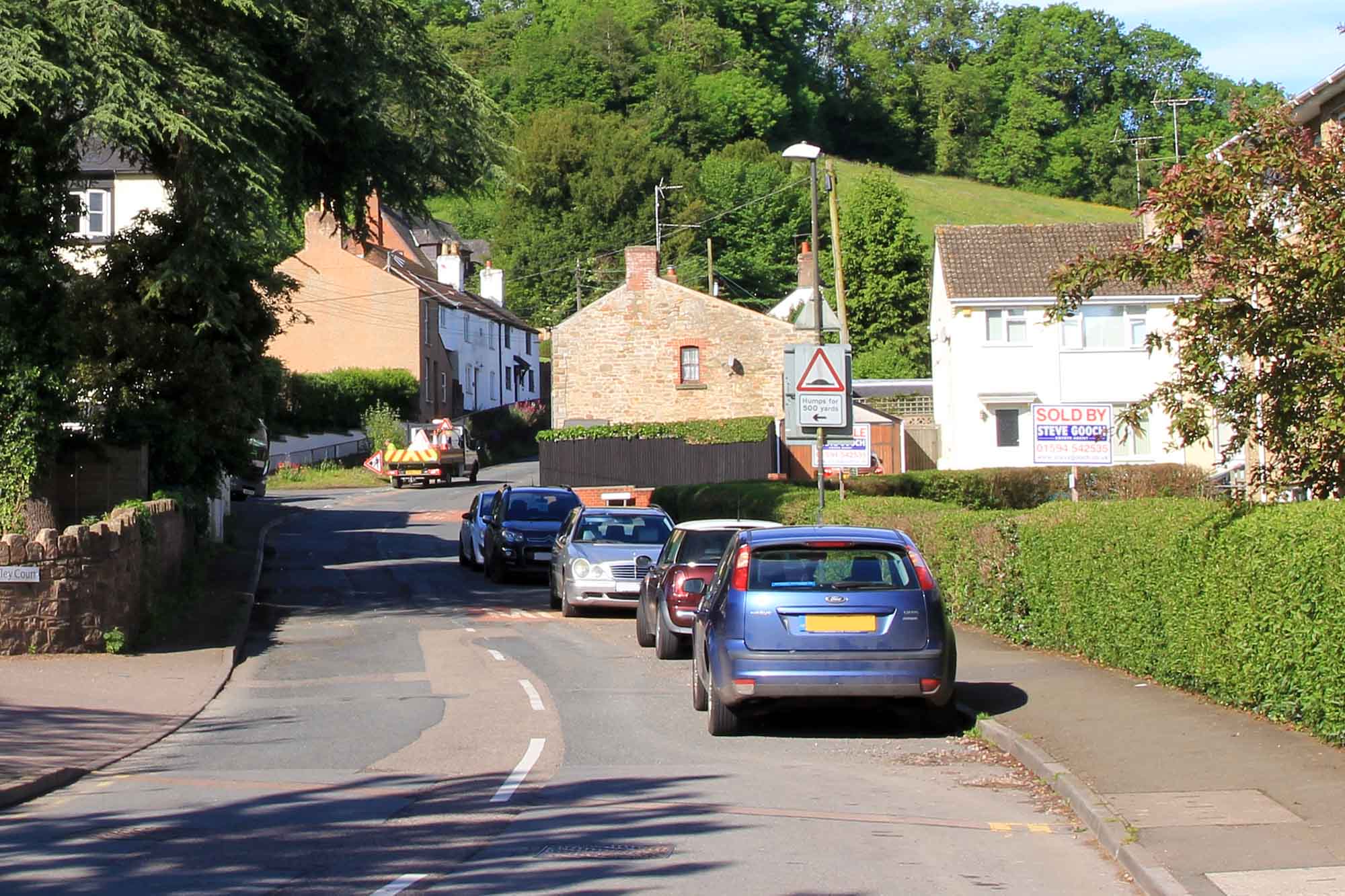 As we leave Mitcheldean the road climbs very steeply up a ridge which runs north-south. What rocks beneath might be causing this?

Look at the colours of the different rocks on the map. Many of the rocks seem to form narrow bands running roughly north to south. Remember at the Wilderness Quarry (site 2) there are steep westward dipping rocks. At the Church you saw local stone full of lots of very hard quartz pebbles. A rock called Quartz Conglomerate, which is exceptionally resistant to being eroded away, underlies the ground where the really steep rise begins. 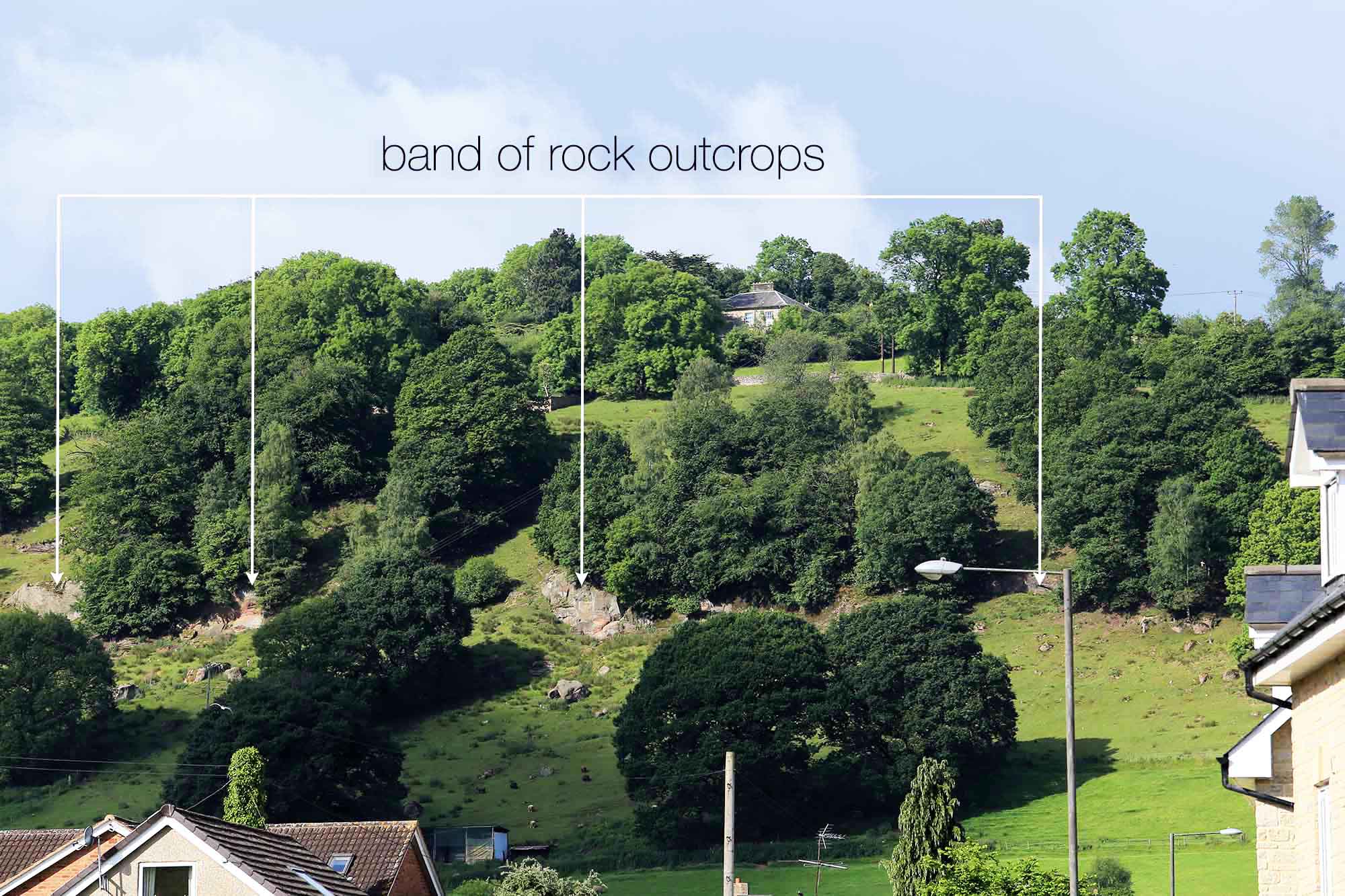 This steep hillside, with a band of rock outcrops (almost a cliff). The picture here is taken looking south from the Gloucester Rd (A4136) as it enters Mitcheldean. A later image in this Task sequence shows examples of outcrops of this same rock all around the Forest of Dean.

To form such a distinct feature these rock outcrops must be made of a hard rock very resistant to the forces of erosion. Using the Map you can locate this band of hard rock and by touching it on the map, find its name. Touch the Then button to discover what this area was like in deep time, when this rock formed and also the bigger picture of what the planet as a whole was like at that time. 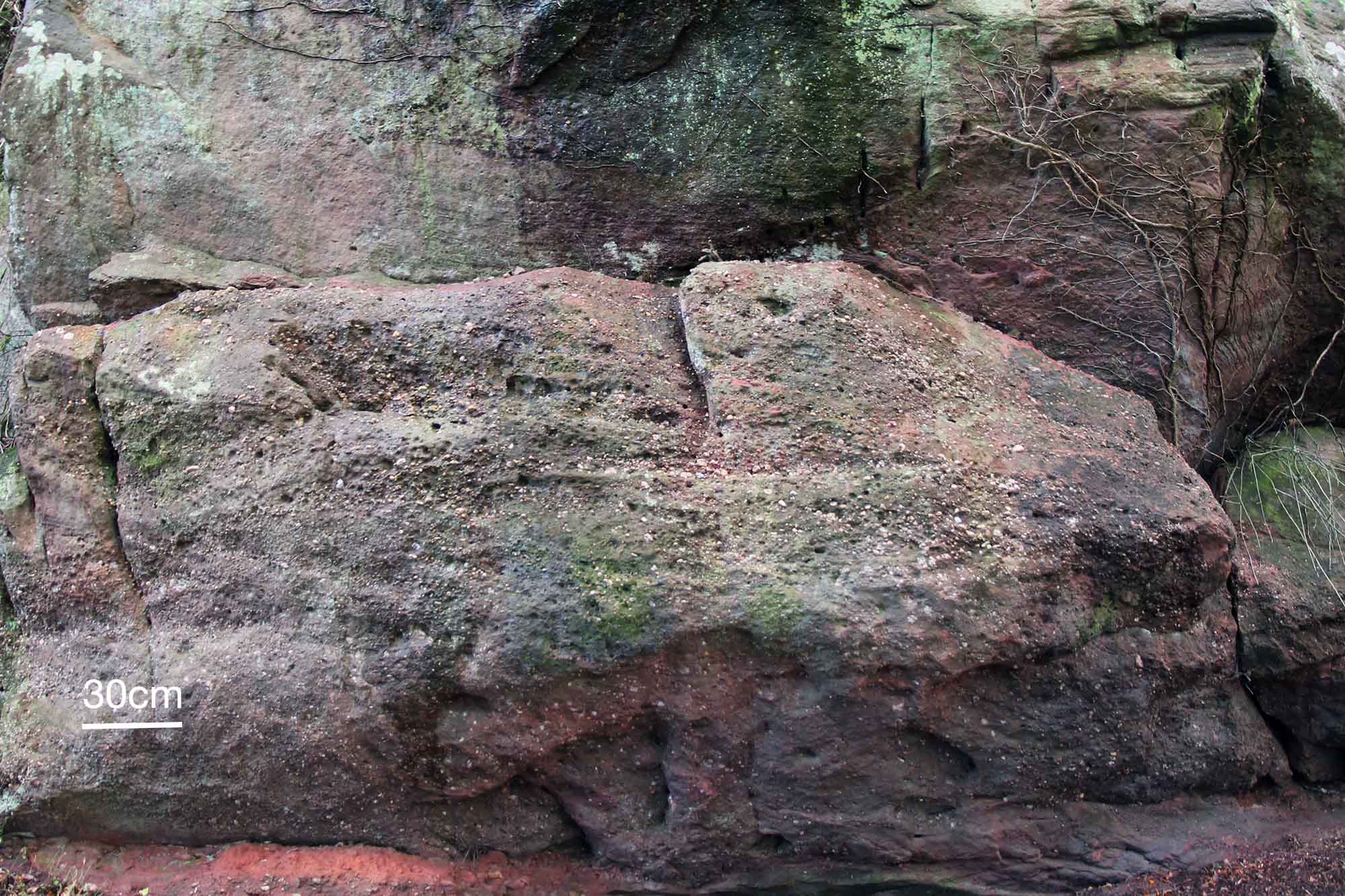 Close up these rock outcrops are coarse sandstones with lots of white quartz pebbles. All cemented together to form a very hard rock, far harder and resistant to erosion than any adjacent rock types. They look as if they are just a continuation of the Brownstones, but they are not, their junction has some 30 million years missing! The audio track explains what happened.

This rock is a good example of a conglomerate. Conglomerates often occur above unconformities. An unconformity is where there is a period of time not represented by any rocks. In other words a bit of deep time history is missing, either because sediments for the missing period were never deposited, or they were deposited, then all got eroded away before the following sediments were laid down. This conglomerate – it is known as the Quartz Conglomerate – sits in contact with the red-brown sandstones we have seen at the Wilderness Quarry, but there is a time gap (an unconformity) of around 30 million years at this contact.

Source of the pebbles 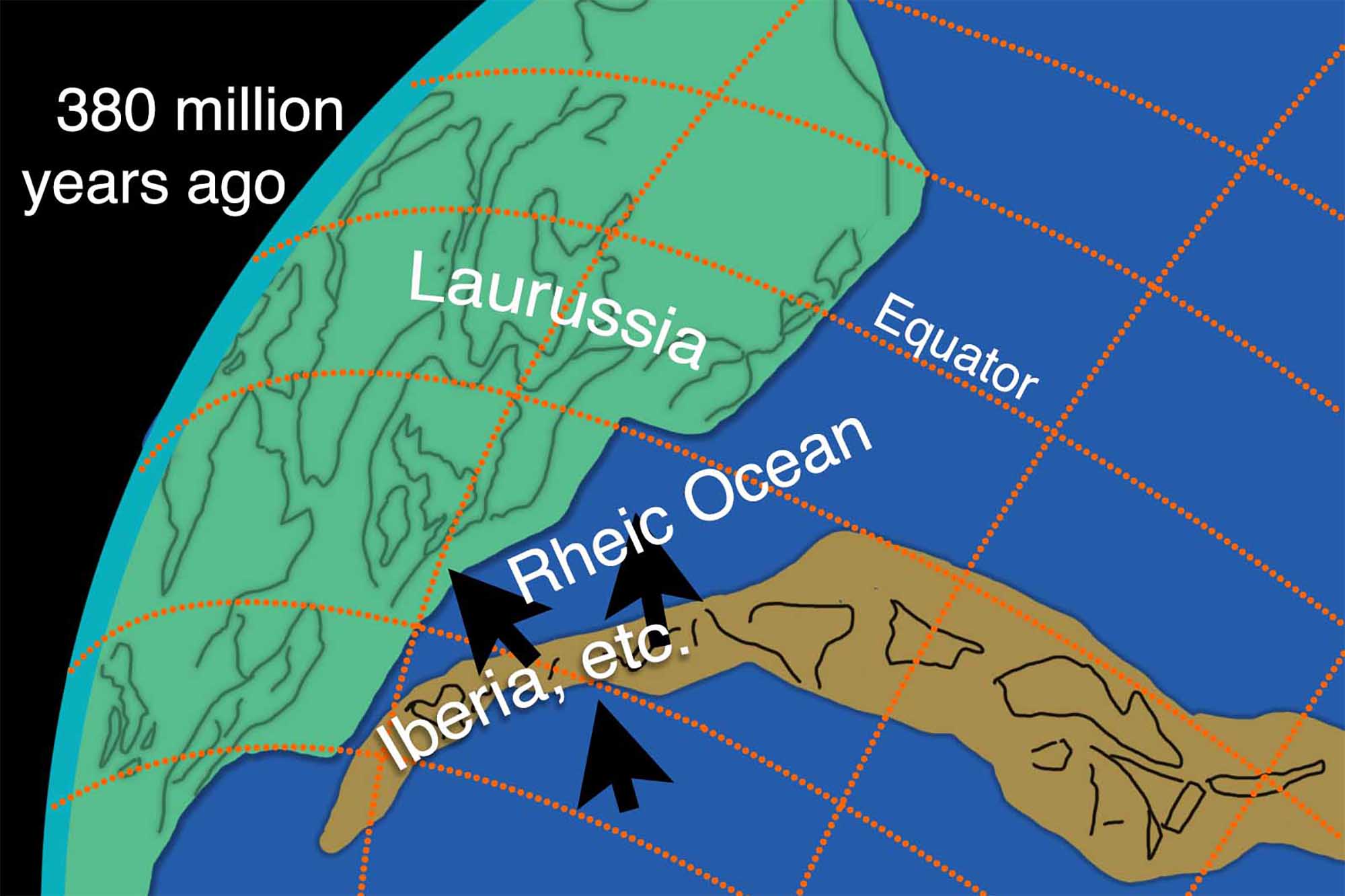 Shove from the south

The nudge by micro-plates lying to the south of Laurussia, elevated the crust of southern Britain (Acadian Orogeny). Shutting down deposition of new sediments and leading to erosion of existing rocks, for about 30 million years. Finally, the Quartz Conglomerate was left behind on the eroded landscape surface.

The dark orange area in the diagram marks an assortment of micro-continents (plates) and terranes (piece of the crust with distinctive features). This collection had previously split off from the northern edge of the Gondwana plate and drifted north. Eventually they suture to the southern edge of Laurussia, forming what today we know as southern Europe. The Acadian Orogeny (mountain buidling event) marks an early stage of this process in building of southern Europe. Later it was followed by the Variscan Orogeny, as Gondwana itself arrives. Later still the Alpine Orogeny occured – in the UK that folded the rocks of the Isle of Wight and Lulworth cove around 30 million years ago. 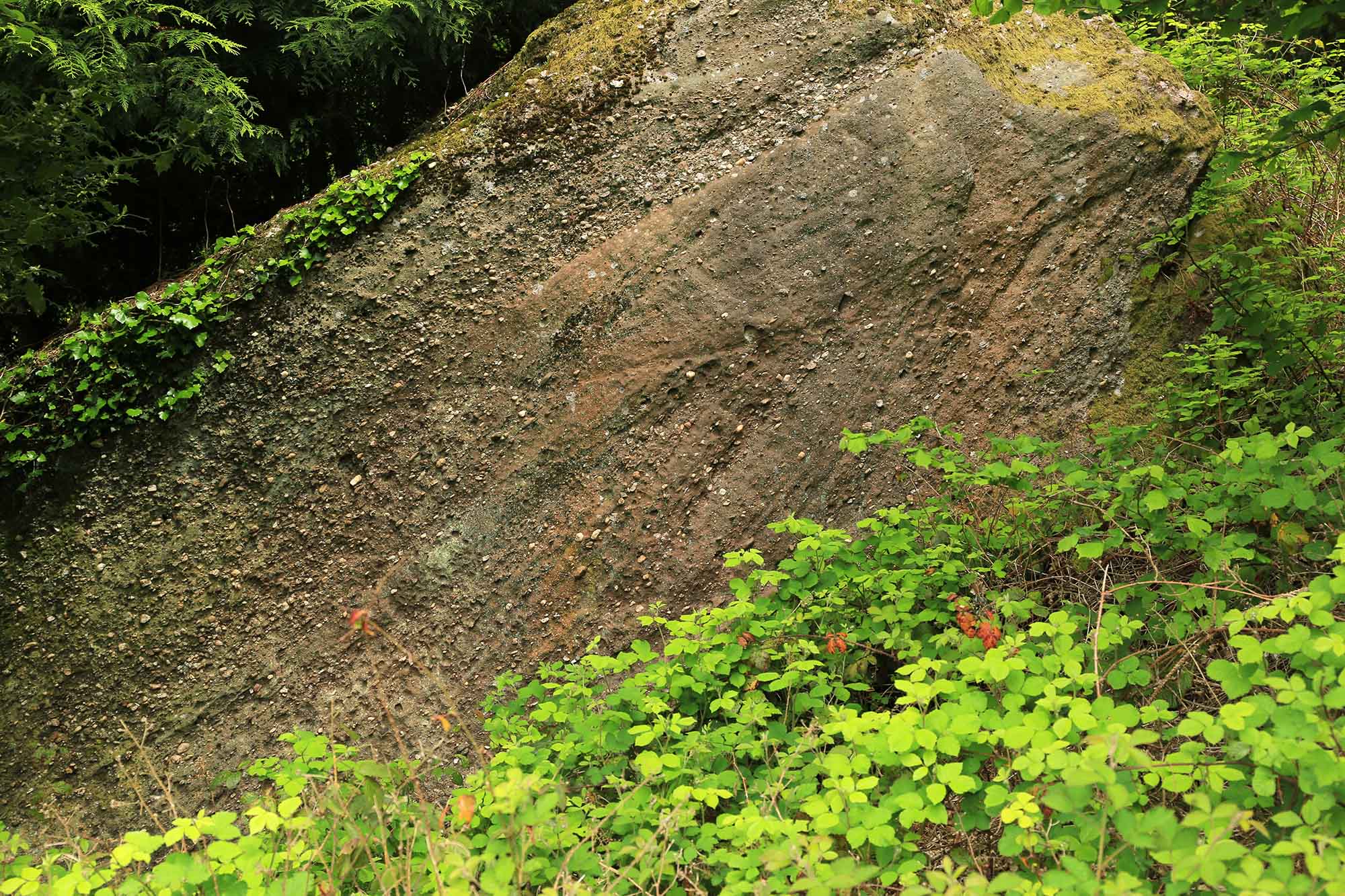 This band of Quartz Conglomerate has been a source of speculation that gold can be found in these rocks.

Gold is often found mixed with the mineral quartz, so it is not out of the question that some trace of gold may be present in the odd pebble – good luck with finding it! This image of the Quartz Conglomerate shows cross-bedding (see overlay below). This bedding feature is evidence that it was deposited by cross-cutting channels of water, in what is called a braided river system. The water would be fast flowing – possibly short lived floods – as shown by the abundance of large pebbles. Note, this block of Quartz Conglomerate has fallen from the main rock face and so is rotated away from its normal orientation. The collapse of large blocks Quartz Conglomerate, e.g. the Suckstone near Staunton, is a feature found all around the edge of the Forest of Dean. 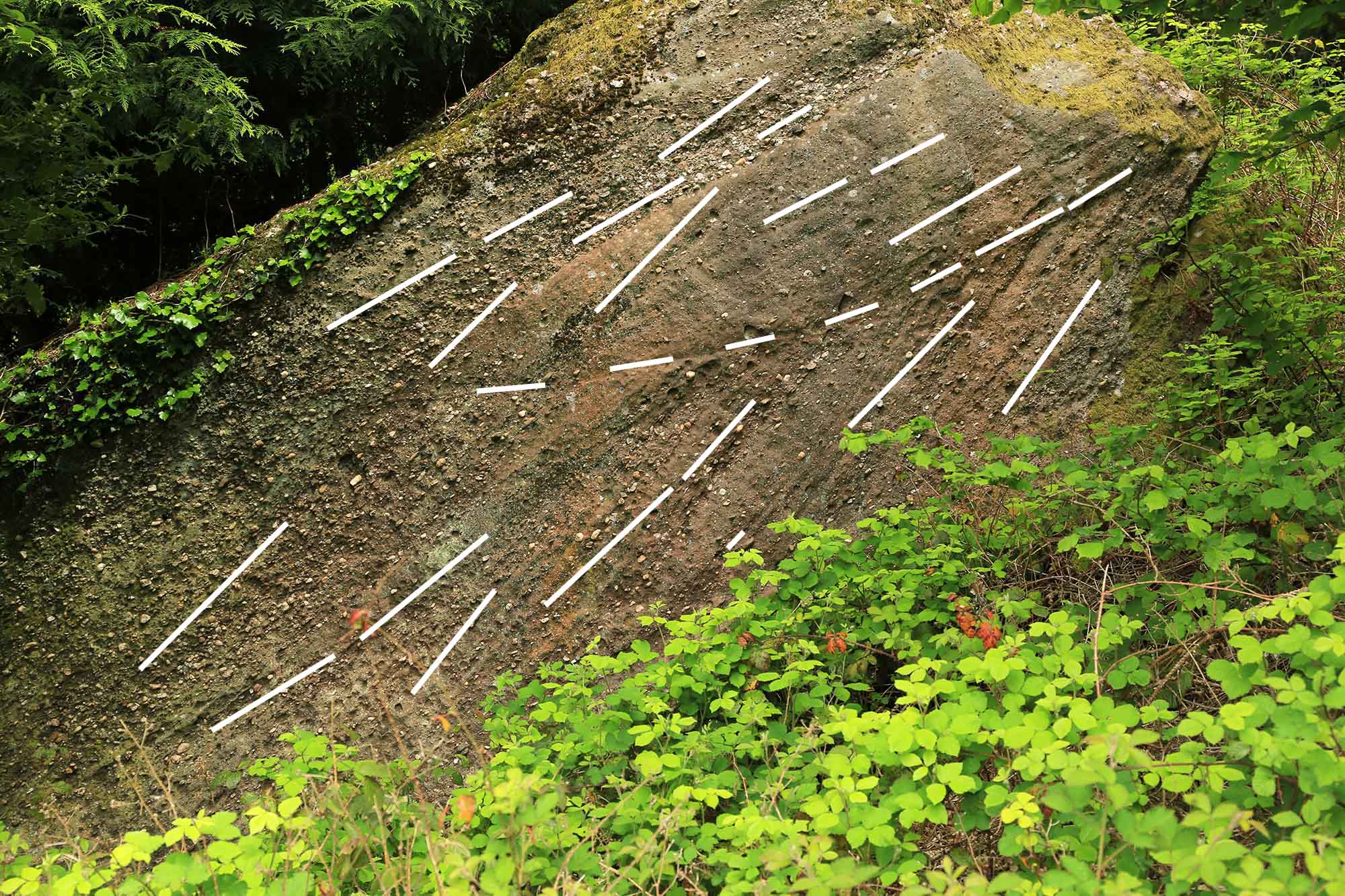 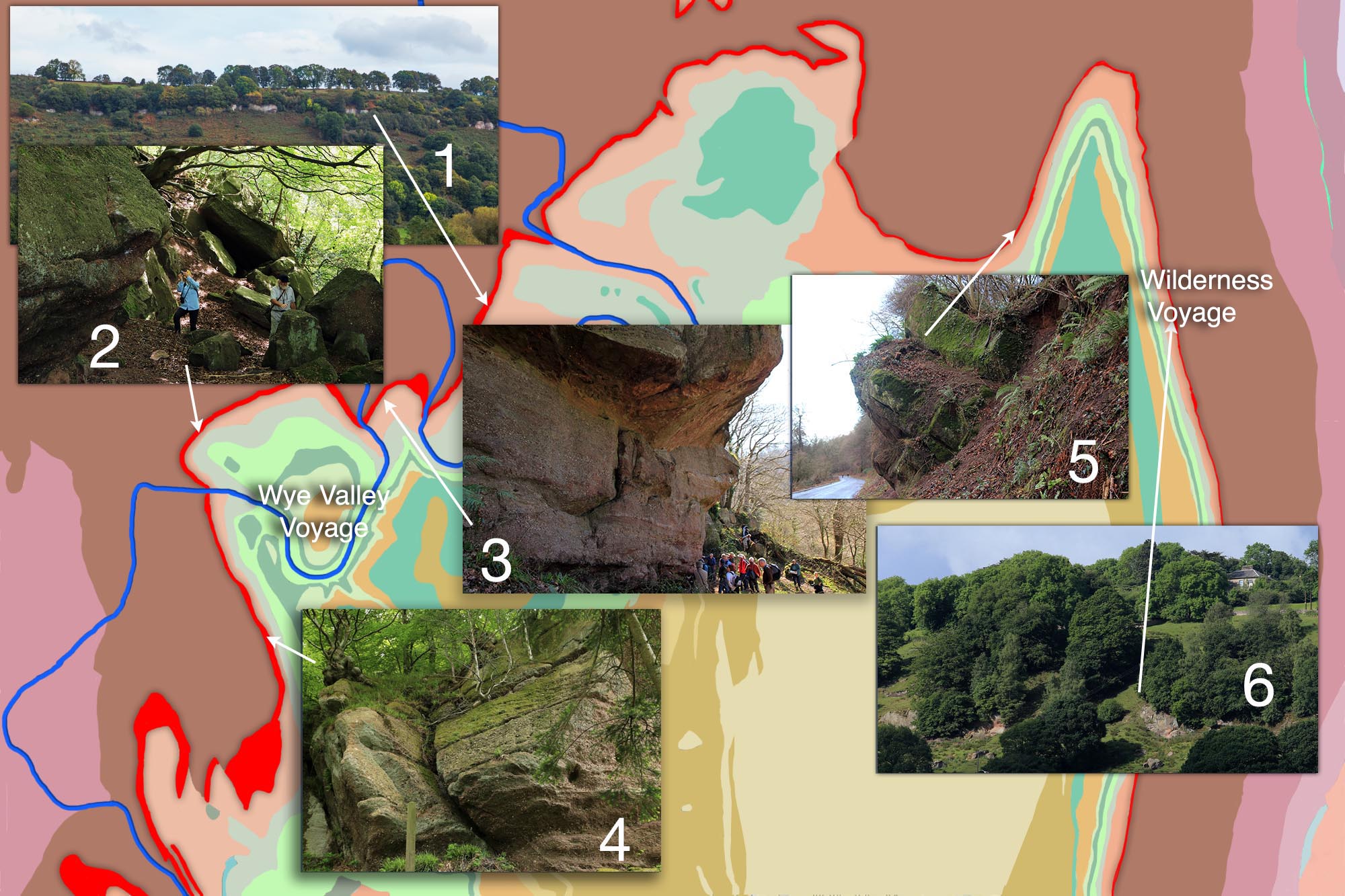 Outcrops of the Quartz Conglomerate around the Forest of Dean.

*This exposure is no longer so striking. following it being cut back and clad in steel fencing by highways in 2018.

The map shows the outcrop of the Quarz Conglomerate (Huntsham Hill Formation) in red. It encircles the Forest of Dean, because the Forest rocks are folded into a big bowl shape, largely by the Variscan Orogeny. On the eastern side of this ‘bowl’ they dip down steeply at about 70′ to the west, to emerge again on the west side of the bowl, dipping at a shallower angle towards the east (the fold is not symmetrical). In the north the dip is to the south and in the south they dip toward the north. Consequently the younger rocks are to be found in the centre of the Forest, and they get older as you move out of the Forest in any direction. The NE corner of the Forest, in the area of Wigpool Common (this Voyage is on the eastern flank of that feature) is a fold (syncline) superimposed on the bigger fold, with a matching anticline (fold up), appearing as the brown coloured (Brownstones) embayment to the west of Wigpool Common syncline. You often find folds, within folds and you have to remember that all this folding occurs in 3D, well 4D if include the important time dimension as well!

What is the most likely cause of the steep hillside above Mitcheldean?

Where have the quartz pebbles come from?

What may have been the cause of the unconformity – the 30 million year gap with no rocks from that time?