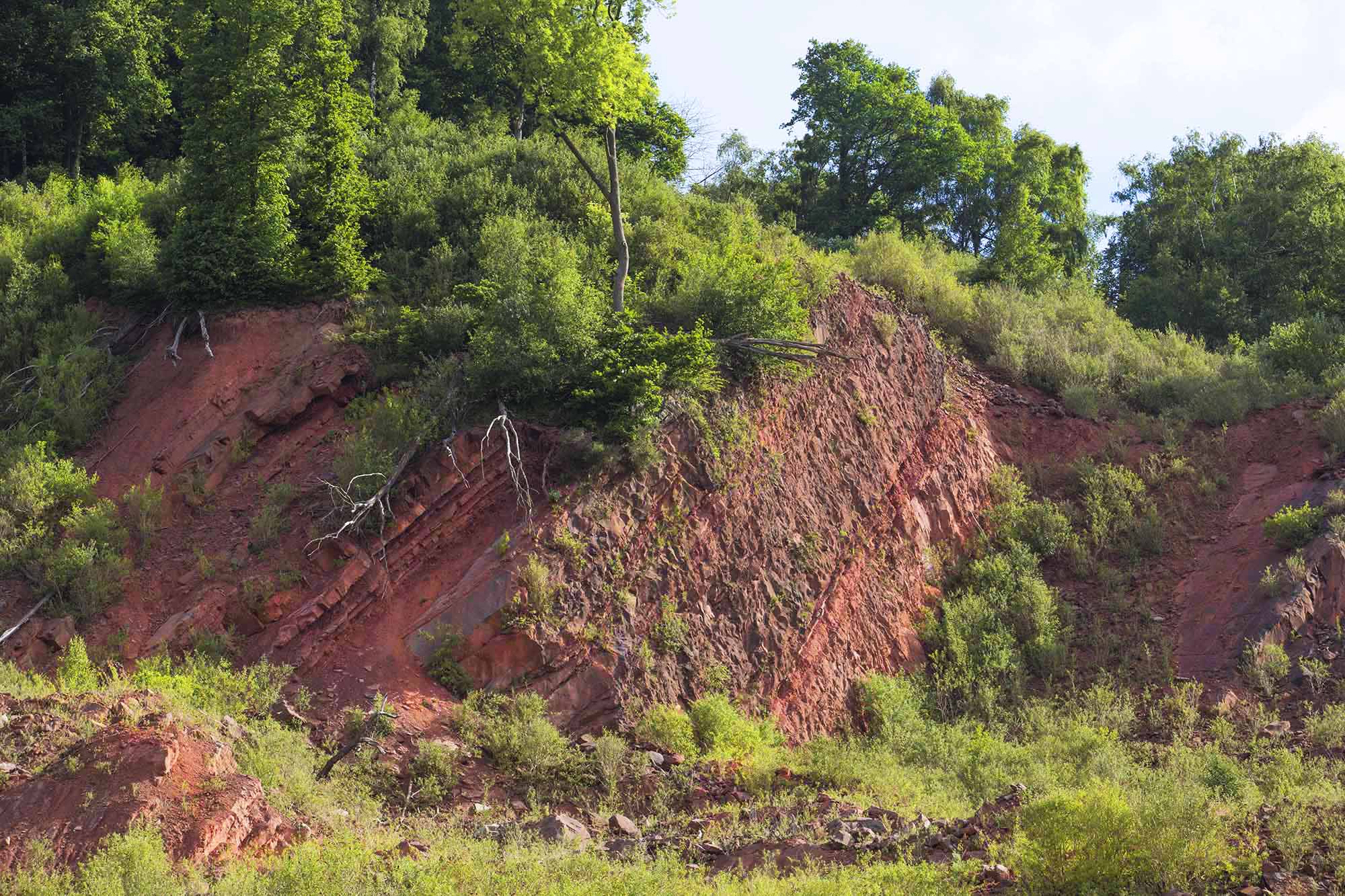 The photo above is of the upper part of the large disused Wilderness quarry. What would you say are the key features of this rock exposure?

The photograph was taken looking approximately NNE, so the beds are dipping essentially to the west at an angle of about 60′. Remember this fact, it will be important later in the Voyage, to help you get a high score. 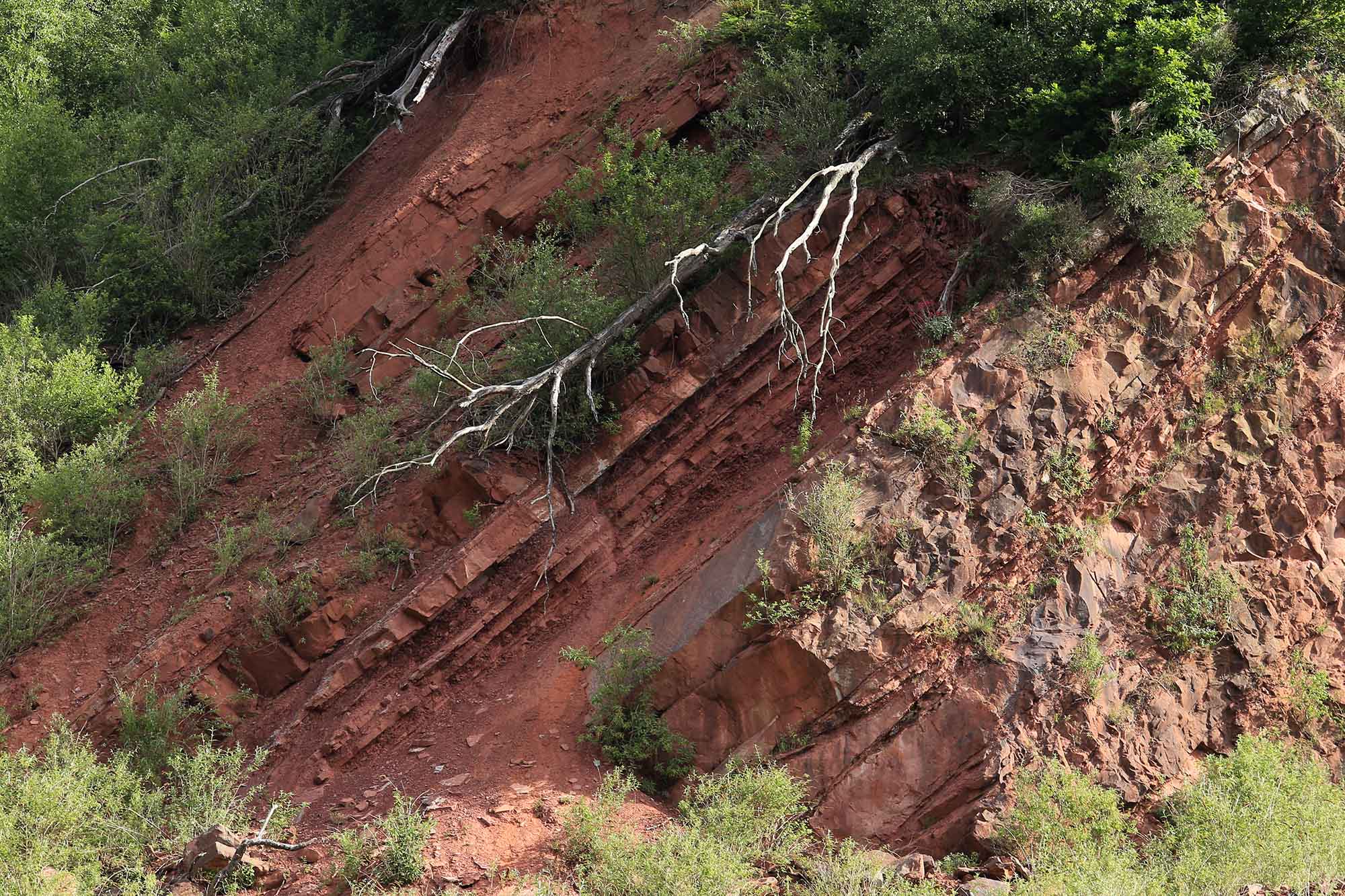 The curved structure (see the highlighted image below) is where the channel of a river has eroded away previously deposited sediments, then infilled the channel with younger sediments. Of course when this happened was long before these rocks were upturned by mountain building forces  – around 300 million years ago. 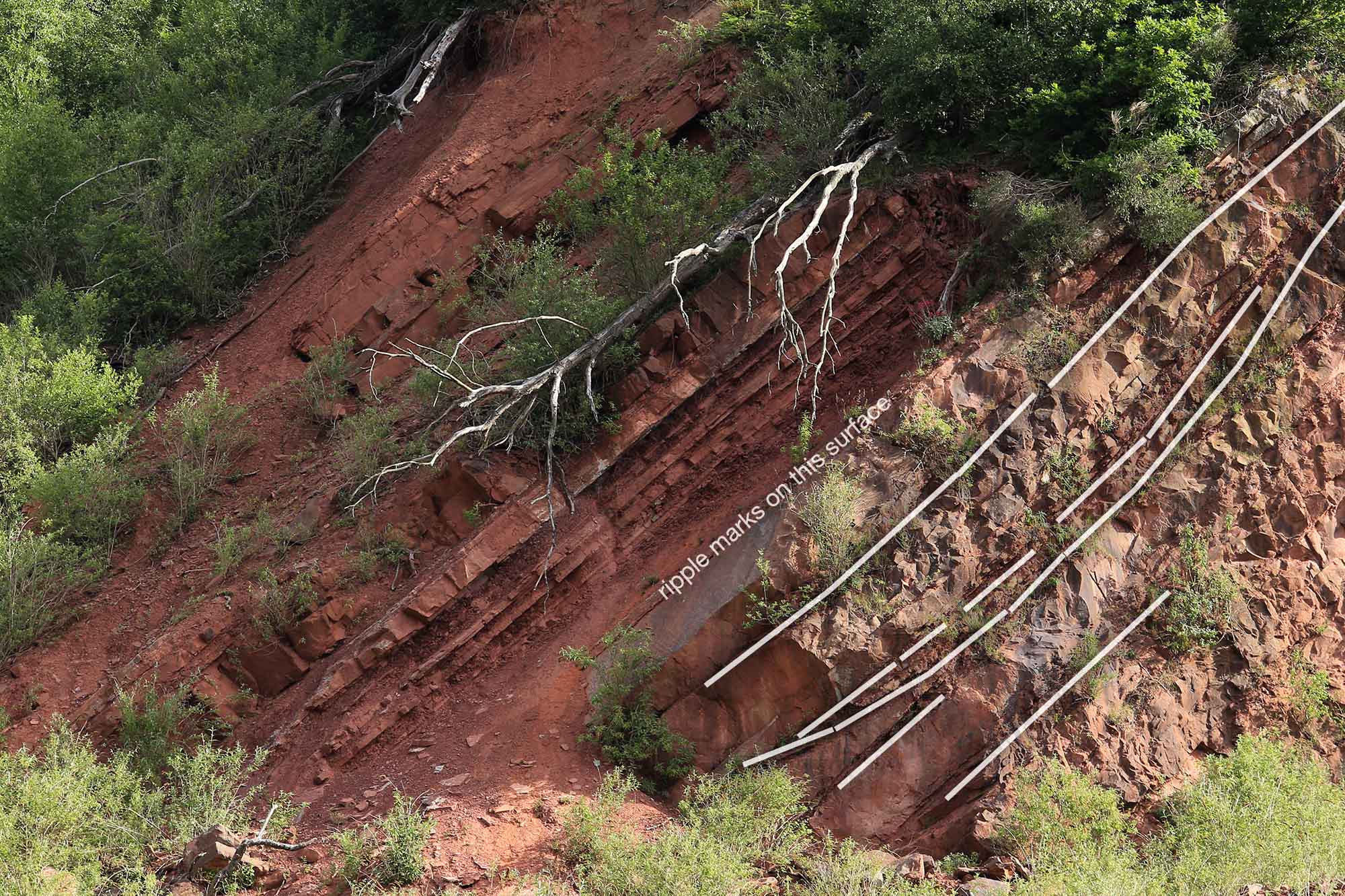 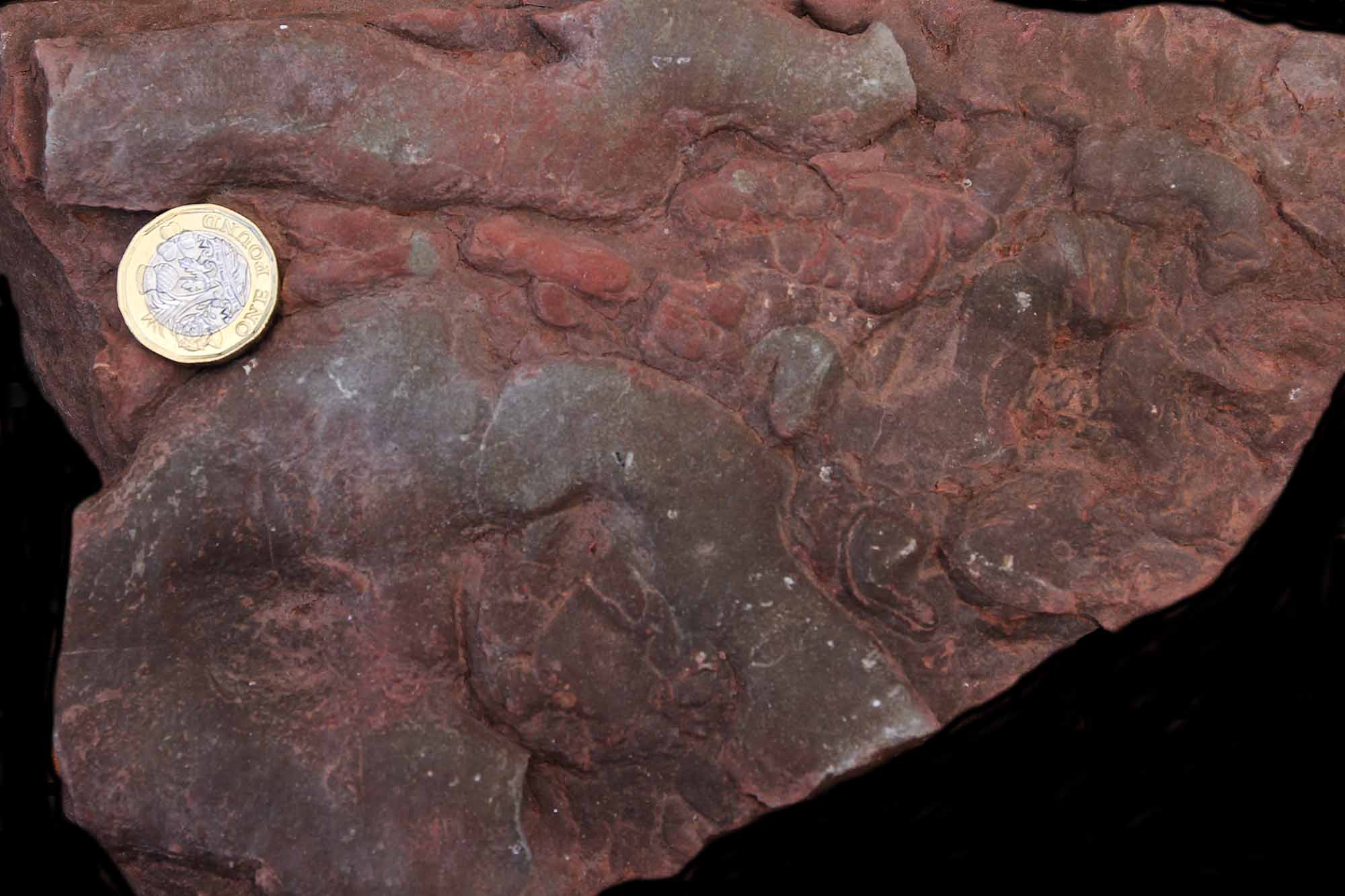 These strange marks can be found on the underside of some of the beds in the quarry.
What could their origin be?

They are most likely trails left by creatures crawling about in the mud left by river floods. You are looking at an impression of the trails, which were later filled by new sediment, which then hardened to preserve the trails as a cast. The creatures responsible for the trails were possibly arthropods (e.g. early scorpions) – use the Life button (in the app) for pictures and more information.

As the mud from a river flood dried in the heat of these times (location then around 30 degrees south of equator) it cracked into polygon shapes, just as mud drying out today does.

Like the trails, we are looking at a cast of the cracks, where a later sediment has infilled the cracks then set hard over time. 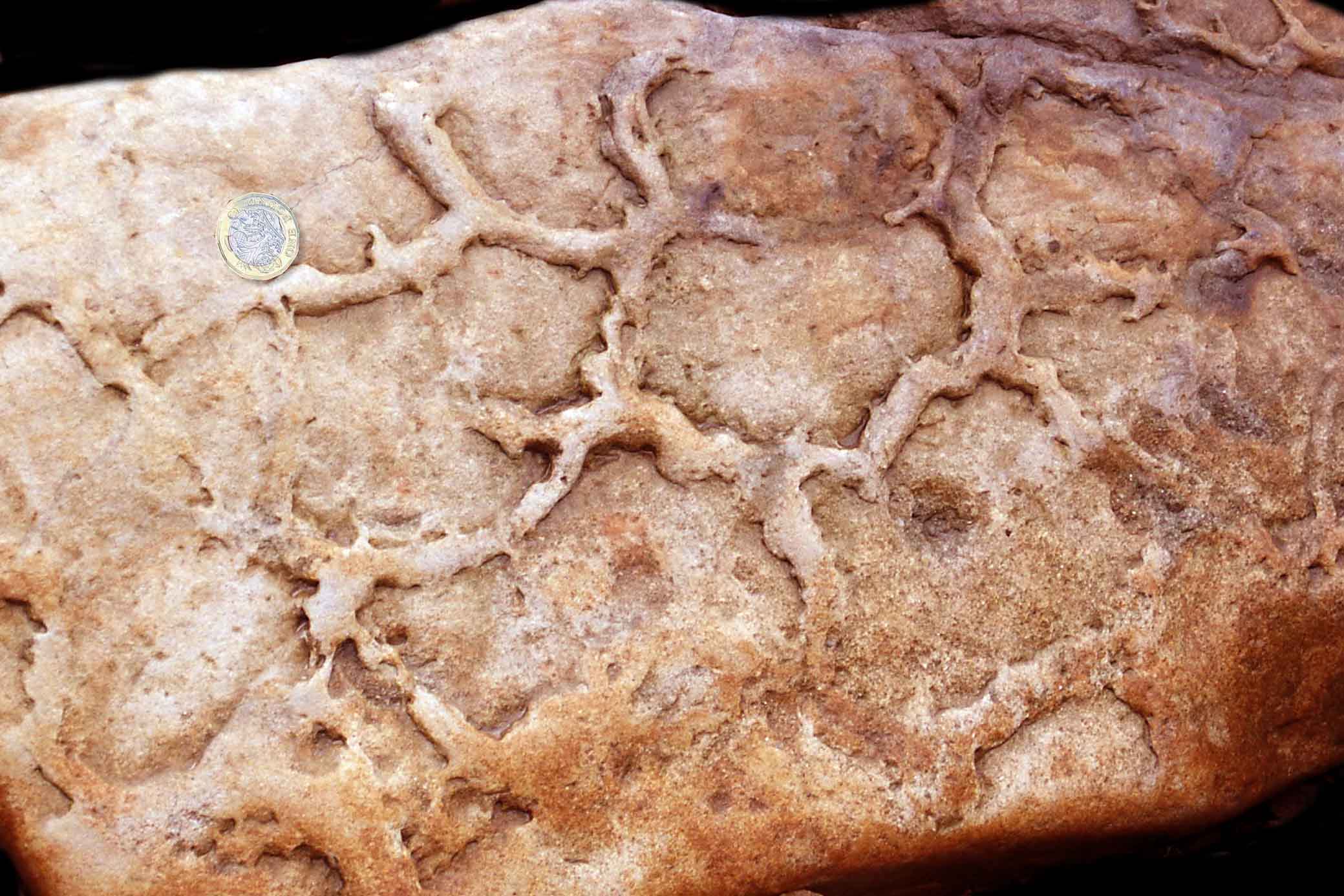 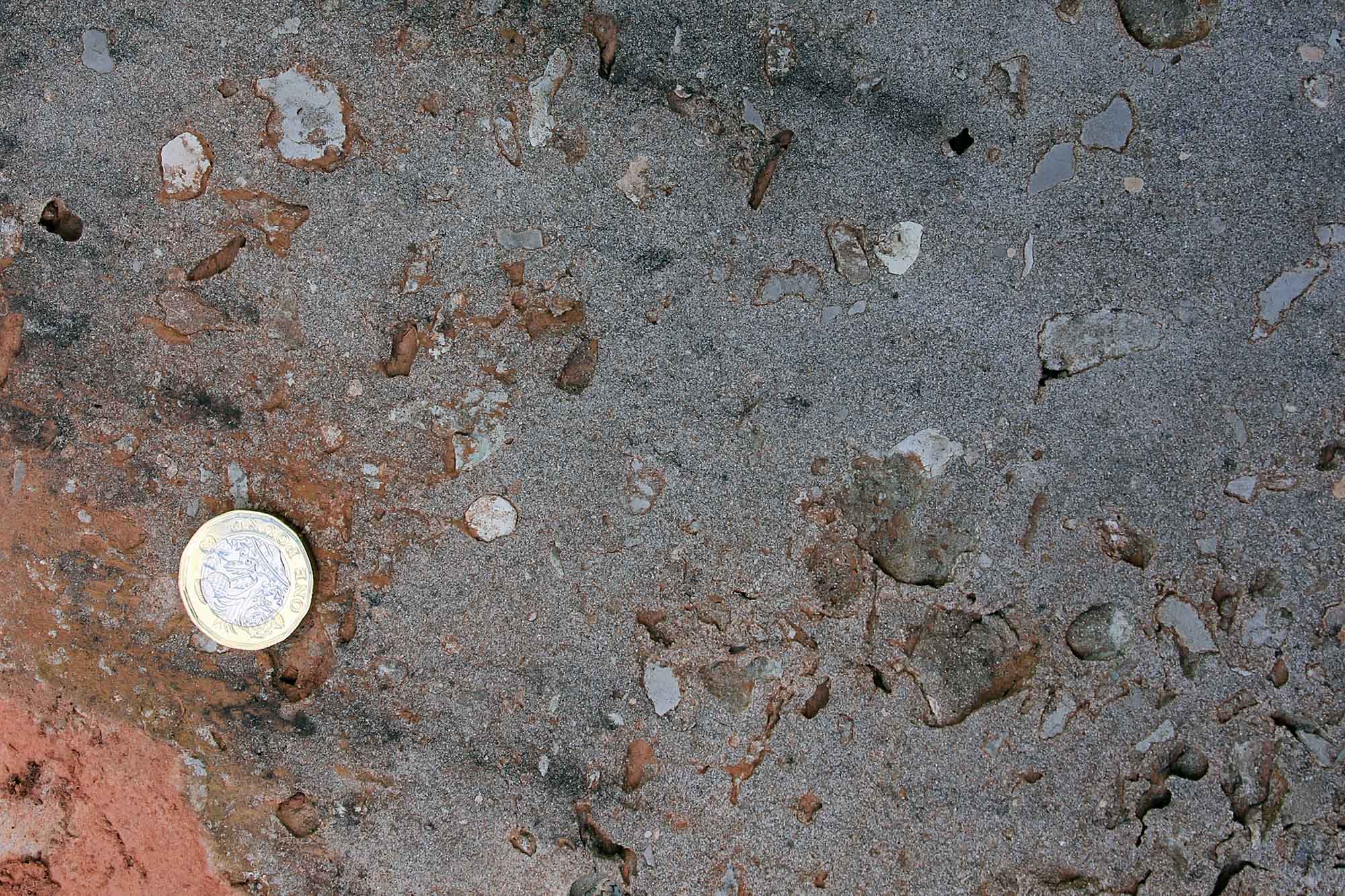 Pieces of soft mudstone (the light grey splodges) scattered through the hard sandstone.

The chunks of soft mudstone have been torn up from an earlier deposit when a new river channel, or violent flood, cut into it. Rocks like this are called intraformational conglomerates. They are conglomerates (like the sandstones with the pebbles in the church wall) but the ‘pebbles’ – clasts is the right term – have come from within the same lot of sediments – intra (within) formation.

Clasts like these of soft mudstone,  are often called rip-up clasts, as they have literally been ripped up from their former location and carried some distance by a strong flow, usually of water, but could be a pyroclastic flow from a volcano. 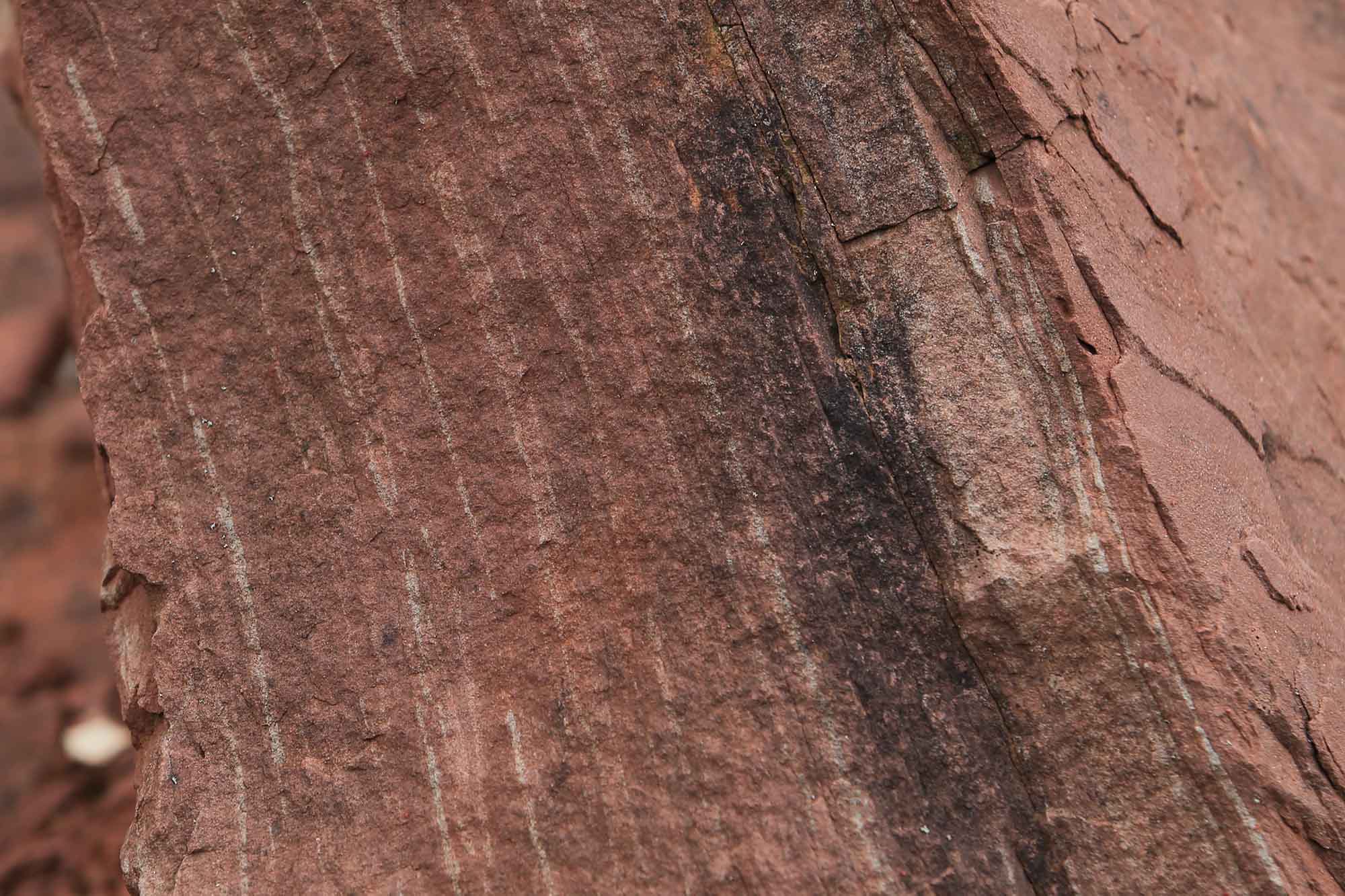 Thin layers of sandstone. The bedding planes show grains of quartz with a red (iron oxide) cement like that seen in the stones at the church. The surfaces also tend to sparkle in the light due to flecks of the mineral mica.

Many of the rocks in the quarry have streaks of a greenish grey colour, contrasting with the red. The greenish colour is another chemical form of iron oxide, one formed under more anoxic (less oxygen) conditions. This change of colour may have formed long after the rock was originally deposited and cemented, for example, by bacteria using the iron oxide as an electron acceptor, which converts iron oxide from reddish/brown to the less oxidised green form. 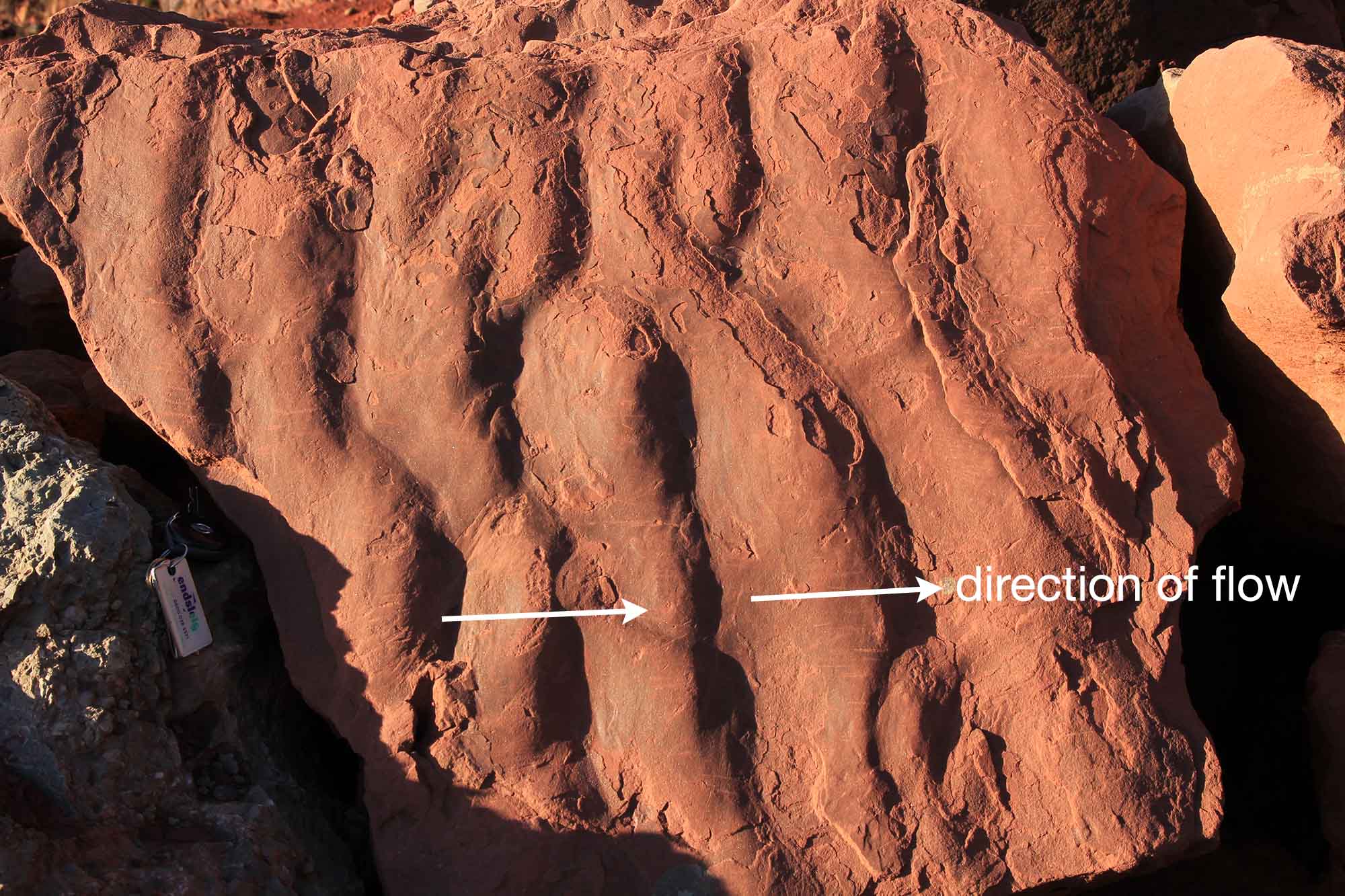 Some of the bed surfaces display ripple marks, left by flowing water.

To be preserved these ripples must have been covered by fine sediment deposited from still water. A process that probably happened countless times, only for all the sediment to be washed away again by the river, but once in while it has been preserved for 400 million years. These ripples have an asymmetric profile – the ridges are steeper on one side. This kind of ripple is formed by water flowing in one direction, as in a river. If this rock was in-situ we could tell the direction of the ancient (palaeo) current. Symmetrical ripples, as you typically find on a beach, are formed when the water moves back and forth rather than in a dominant direction. 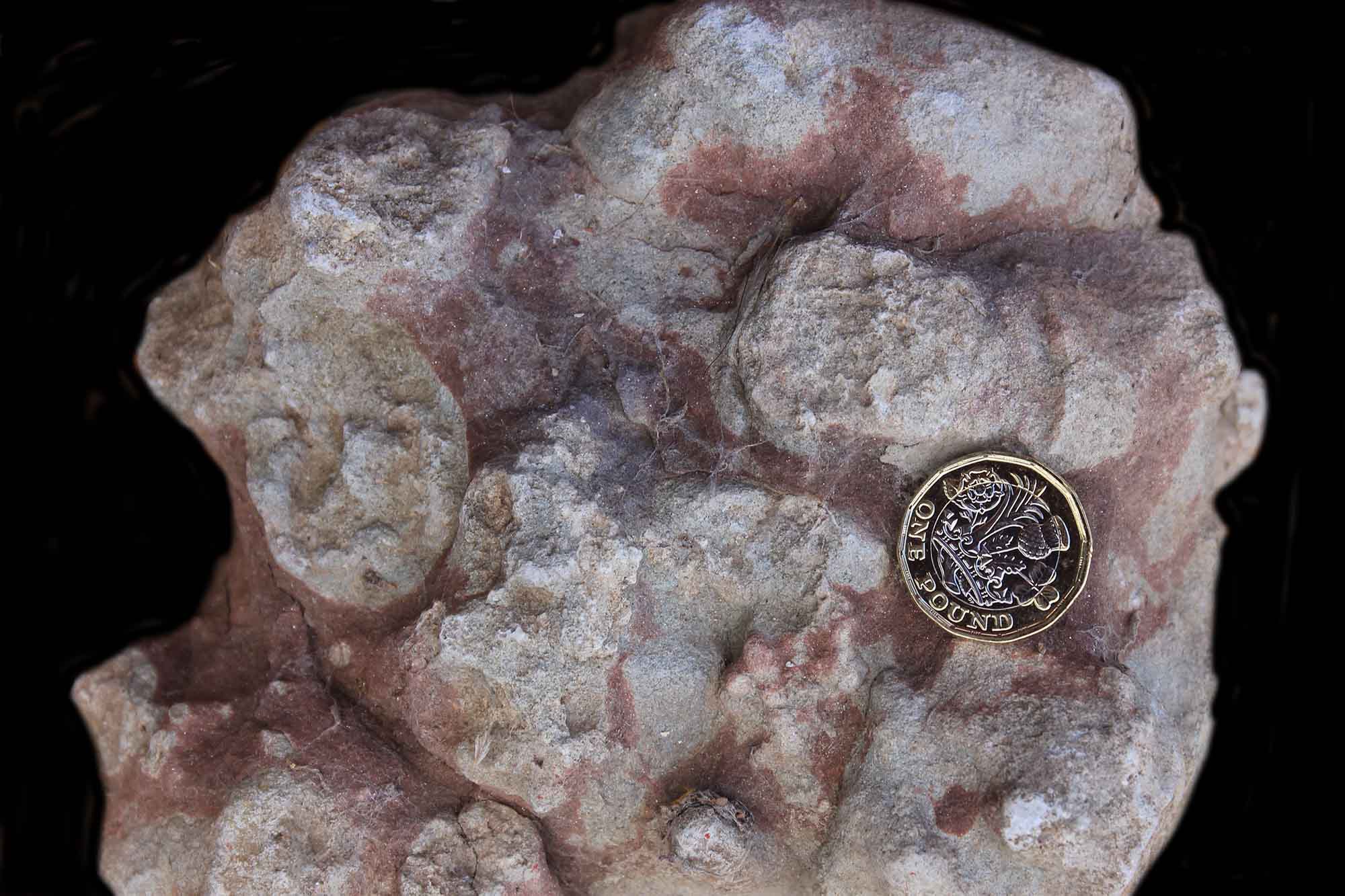 A number of rocks in the quarry have a rubbly nodular appearance, almost like modern day concrete. How are they formed?

These are called calcretes. The nodules contain calcium carbonate (effectively limestone). Calcretes are forming today in soils where you have high levels of evaporation. Groundwater containing dissolved calcium carbonate is drawn up through the soil/sediment. The water evaporates in the hot sun and the calcium carbonate and other minerals precipitate out as nodular deposits. So these calcretes are probably telling a story of hot dry conditions back when these rocks were forming around 400 million years ago. Geologists often use information from the present to help interpret what was happening in deep time.

Assuming all rocks of the area have the same steep dip to the west we see in this quarry, which rocks will be the oldest on our Voyage, those to the?

What kind of environment do the rocks at the quarry seem to have been formed in?

Given the rocks in the quarry are around 400 million years old, find out what the source of their sediment may have been.

Which way were the rivers generally flowing?

What type of rivers most likely deposited the sediments at the quarry?