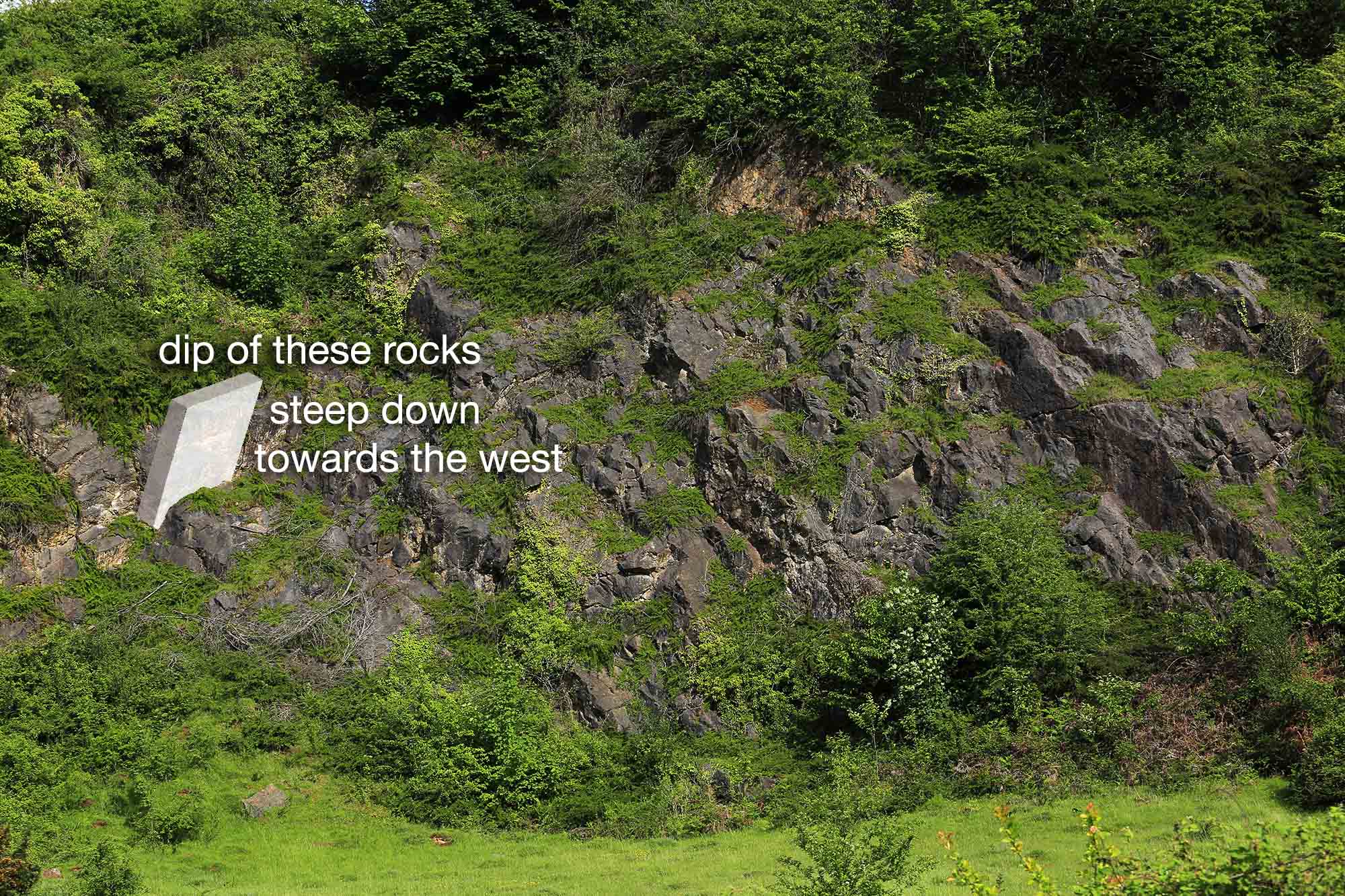 Quarry in the Black Rock Limestone

The Black Rock Limestone is a Carboniferous limestone formed under marine conditions. The dip of the these rocks can seem to be at odds with others rock dips in the area. That is because the rock joints (parallel cracks running through the rock) are more obvious to your eye than the bedding planes. In the photo above the true angle of dip of the rock beds is depicted by the overlay slab.

The original name for this rock in the Forest of Dean was the Lower Dolomite. Dolomite is a limestone where the calcium has been replaced by magnesium. Dolomite when freshly exposed often has a slight pink tint and does not fizz when acid is placed on it, unlike calcium based limestones.  The age of the Black Rock Limestone is between 343 and 359 million years old. The hard nature of the Black Rock Limestone makes it a very widely quarried rock for road and other construction work. 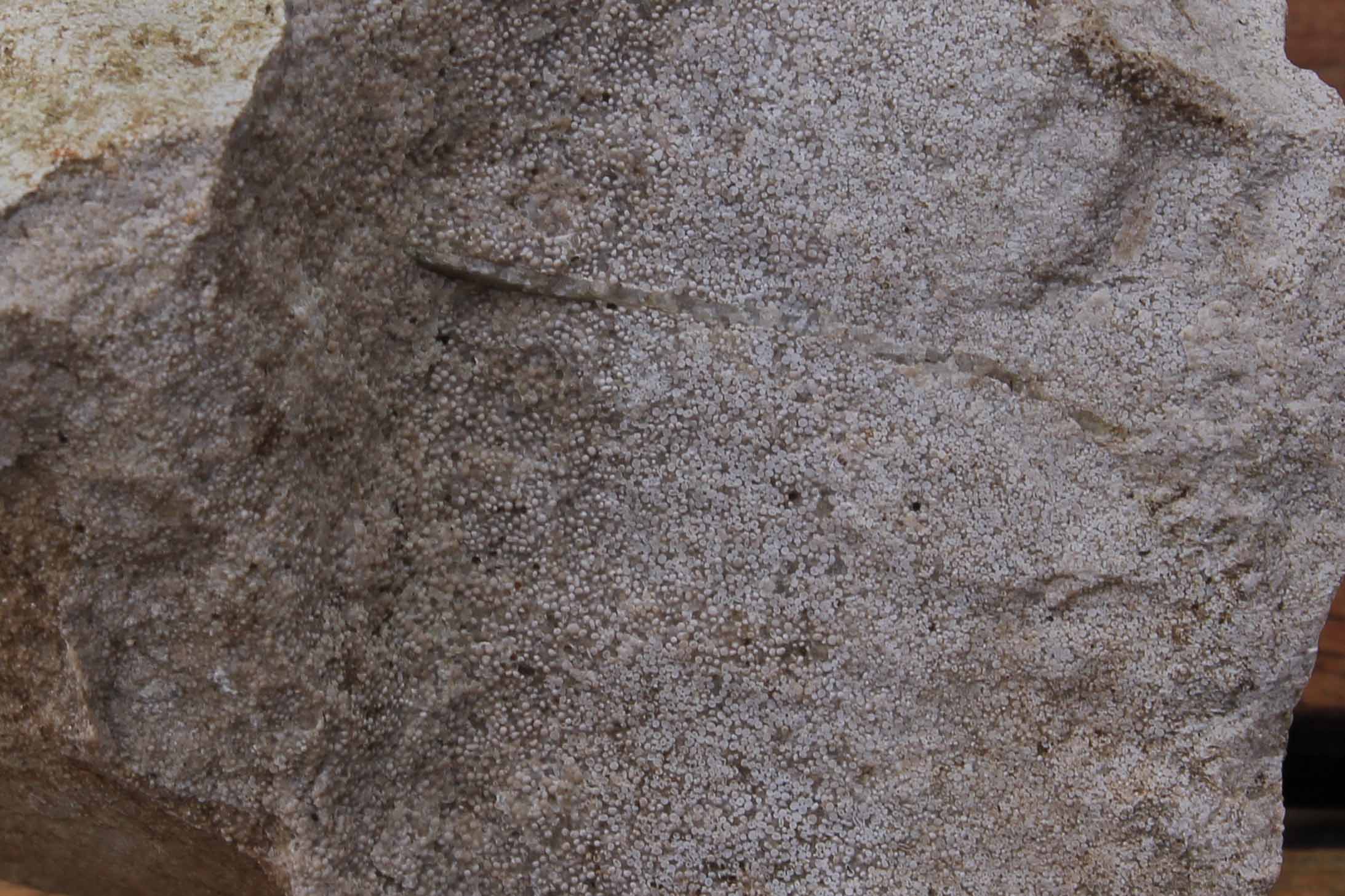 In the image you can see (zoom it) the tiny ooids that make up much of this oolitic limestone. Ooids form in warm, calcium carbonate supersaturated water by precipitation of calcium carbonate, or other minerals, which grow in concentric layers around a central nucleus. The steady rolling agitation by water ensures the ooids grow equally in all directions – as spheres.

Today we find ooids forming in the shallow warm waters of the Bahamas.\n\nThis observation suggests the conditions, when the 343 to 352 million old Gully Oolite was forming, would have been similar, in terms of the water being warm, shallow, saturated with calcium carbonate and swishing back and forth. A example of the principle of ‘the present being a key to the past’. 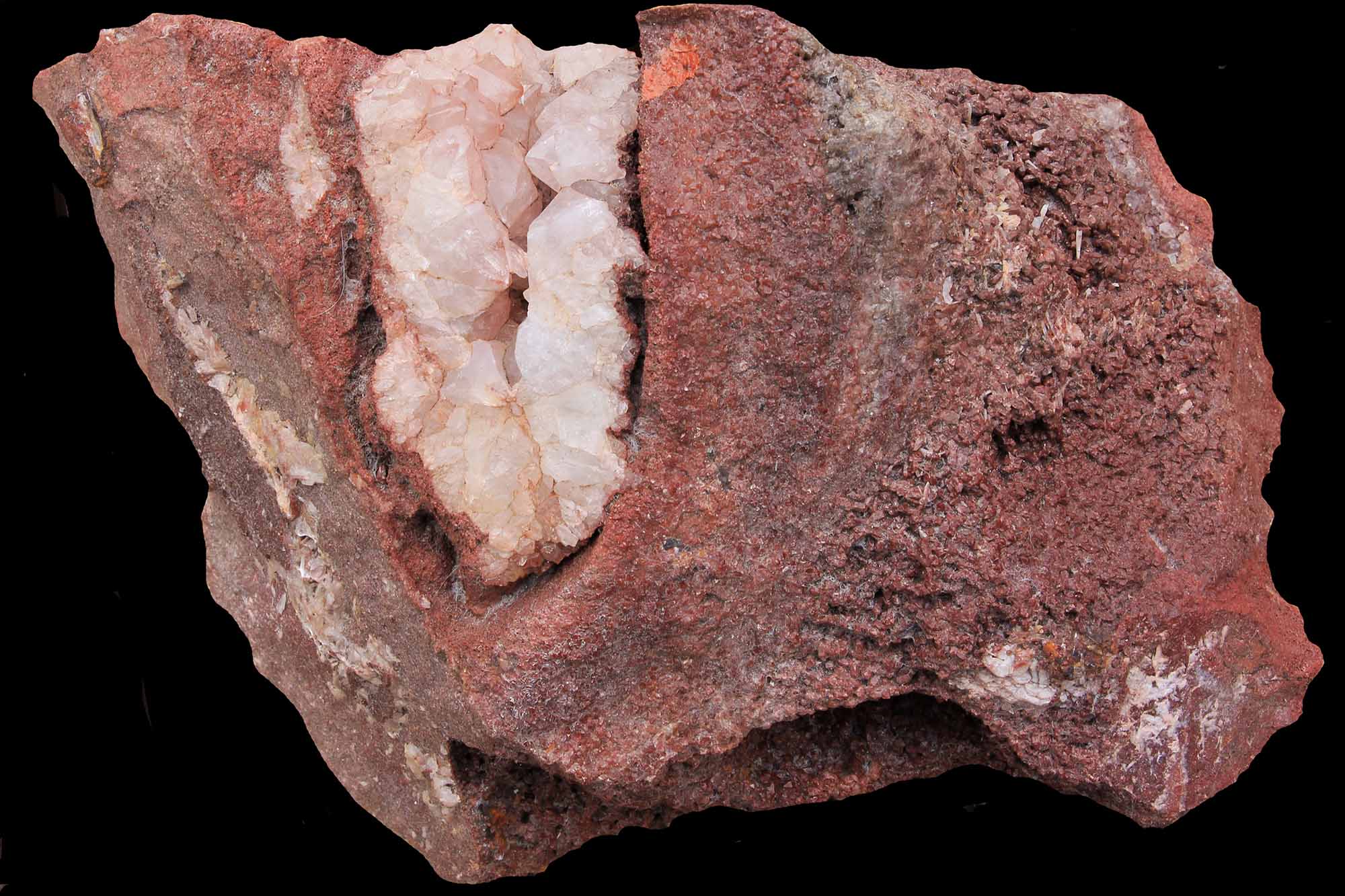 This sample of Gully Oolite has been substantially altered probably by acidic ground water dissolving away a lot of the limestone, to leave voids which have subsequently been filled by other minerals like quartz, along with iron minerals.

This is the type of ore bearing rock that miners, from Roman times, have excavated in the Forest of Dean.Many changes can take place to a rock after it has formed, and the older it is the greater the number of events it has probably been exposed to. A possible source for the iron has been suggested as the red (iron oxide cemented) rocks of the Triassic that probably once covered the Forest of Dean, but have long since been eroded away. 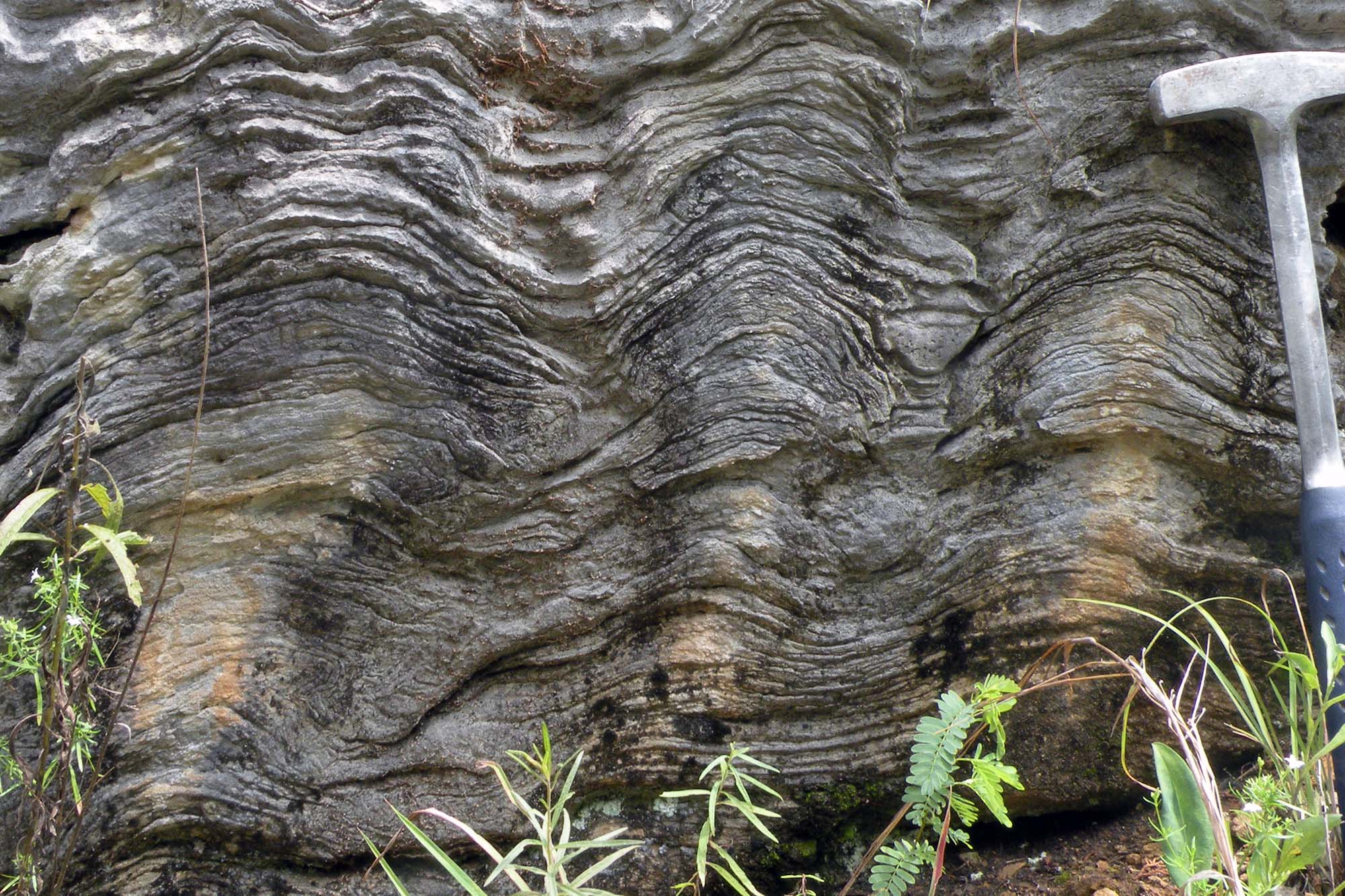 A Carboniferous Limestone, formerly known in the Forest of Dean as the Whitehead Limestone, on account of its white colour (when freshly exposed) and occurence above (head) the iron bearing Gully Oolite in Forest iron mines. The wavy layered shapes were produced by algal mats. in other places the algal colonies give rise to domed structures as shown in the ‘then’ reconstruction for the Llanelly Formation.

The Llanelly limestone often features fossil algal mats, suggesting it formed in quiet lagoonal settings. The trend from the Black Rock Limestone through the Gully Oolite, Llanelly limestone to the Cromhall Sandstone, indicates a shallowing of the sea over time – a marine regression. Moving further forward in time, after the Cromhall Sandstone comes sandstones, mudstones and coal seams. Rocks formed in swamps and river systems, of the Carboniferous rainforests. So we return to terrestrial conditions in this part of the world. 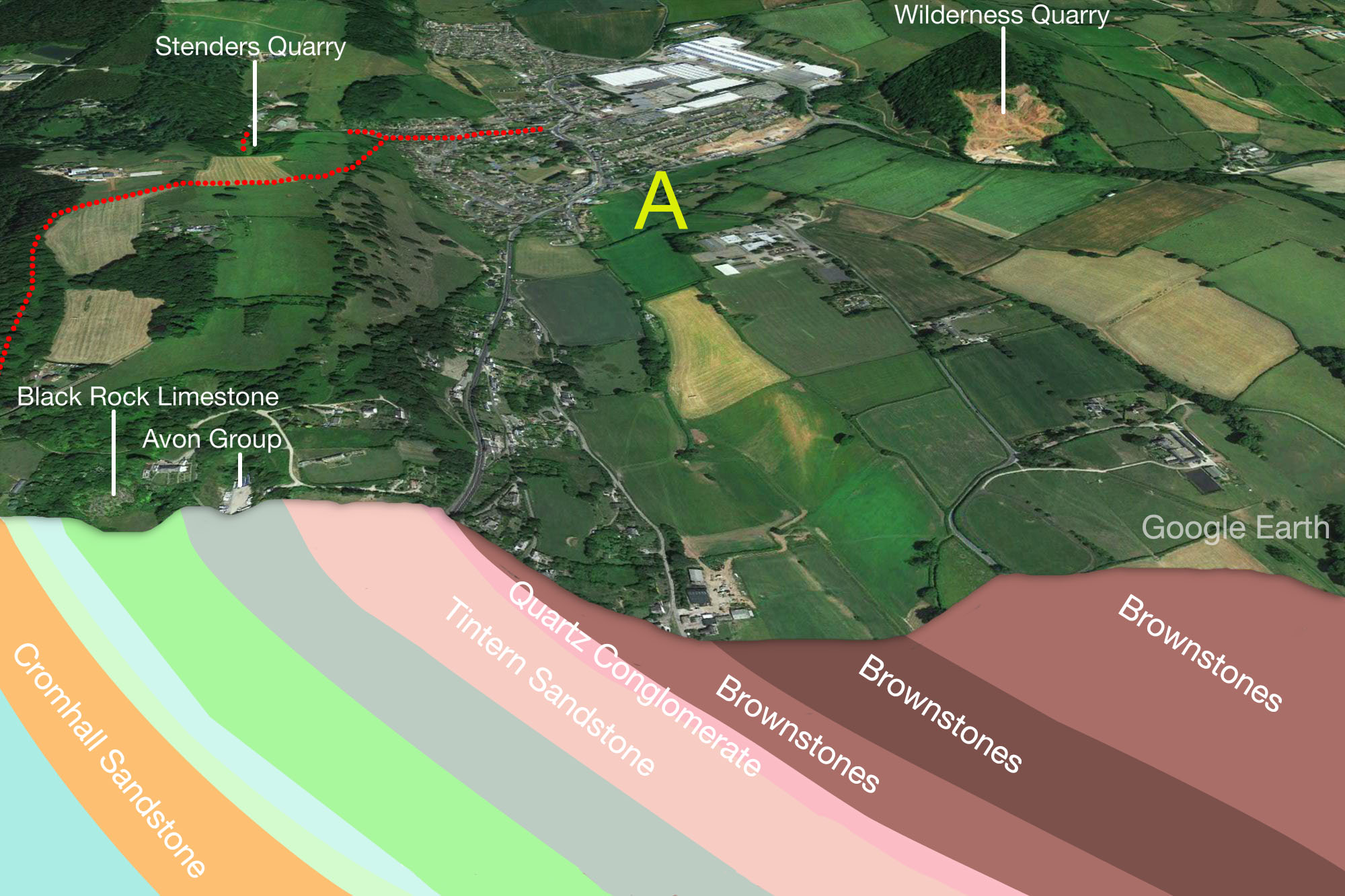 Overview of the Voyage area – version A

Taking into account all the information presented in this Voyage, do you think this diagram (or the next one) is a correct interpretation of how the rocks may be arranged underground in the area of the Voyage? The view is looking towards the north, so west is on the left of the diagram.

he darker coloured band in the Brownstones, marks a sequence where the normally dominant hard sandstone beds of the Brownstones have reduced in number, being replaced by more of the softer mudstone beds. This could reflect a period when the water velocity in the big Devonian rivers slowed, which would favour deposition of finer sediment. Or perhaps there was just less coarse sediment available at the source of the rivers – a period of reduced erosion of those mountains (introduced in Task 2) in the far NW, In more recent times, say the last 50,000 years, erosion has gone to work and removed more of the softer Brownstones, forming the north south valley in which the village of Mitcheldean came to be established around 1200AD – about the last two hundredth of a pixel on the time column. 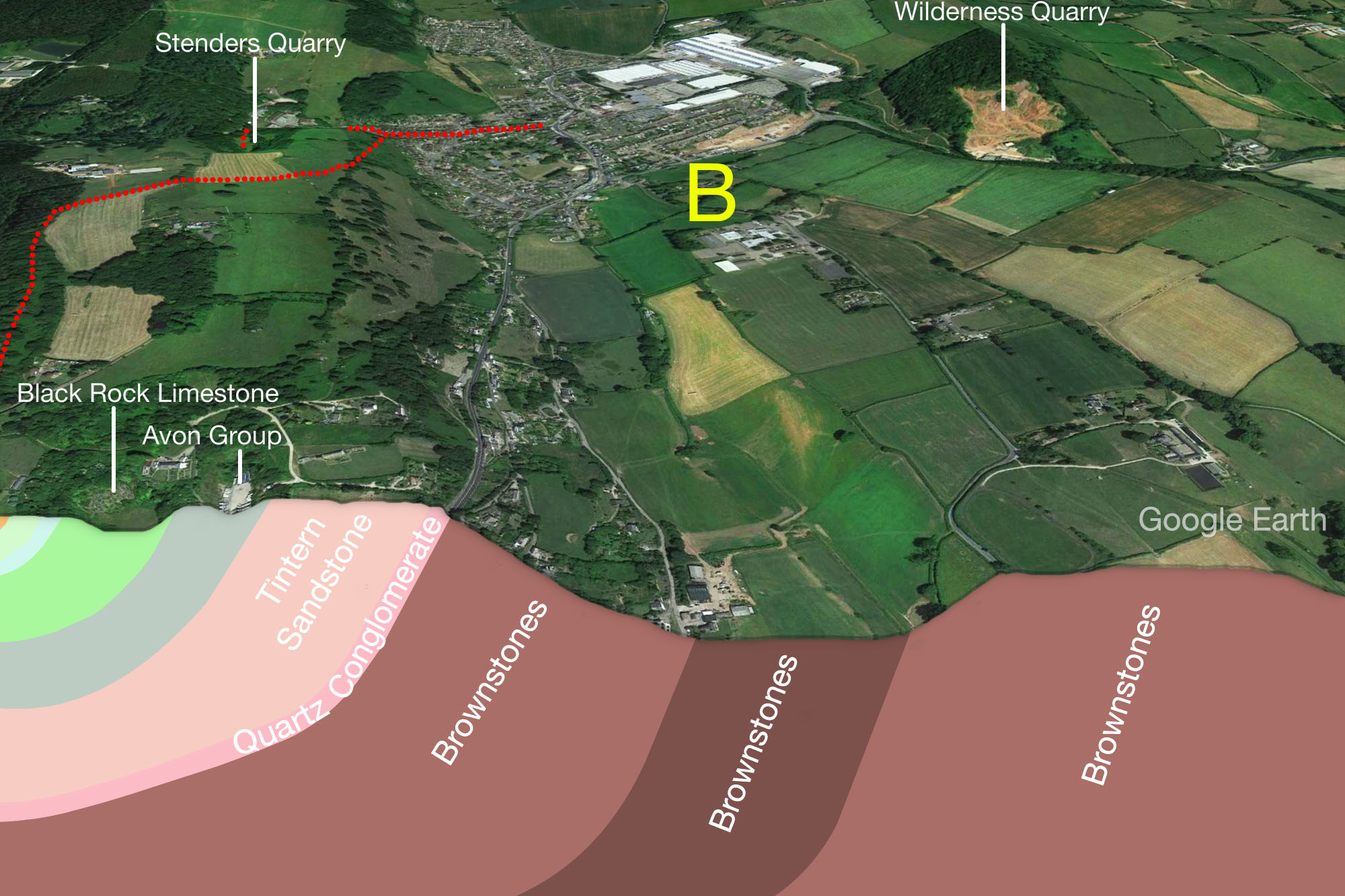 Overview of the Voyage area – version B

Or is this a better interpretation, or one that is flawed on the evidence?\n\nAs with version A, the view is looking towards the north, so west is on the left of the diagram.

The darker coloured band in the Brownstones, marks a sequence where the normally dominant hard sandstone beds of the Brownstones have reduced in number, being replaced by more of the softer mudstone beds. This could reflect a period when the water velocity in the big Devonian rivers slowed, which would favour deposition of finer sediment. Or perhaps there was just less coarse sediment available at the source of the rivers – a period of reduced erosion of those mountains in the far NW. In more recent times, say the last 50,000 years, erosion has gone to work and removed more of the softer Brownstones, forming the north south valley in which the village of Mitcheldean came to be established around 1200AD – about the last two hundredth of a pixel on the time column. 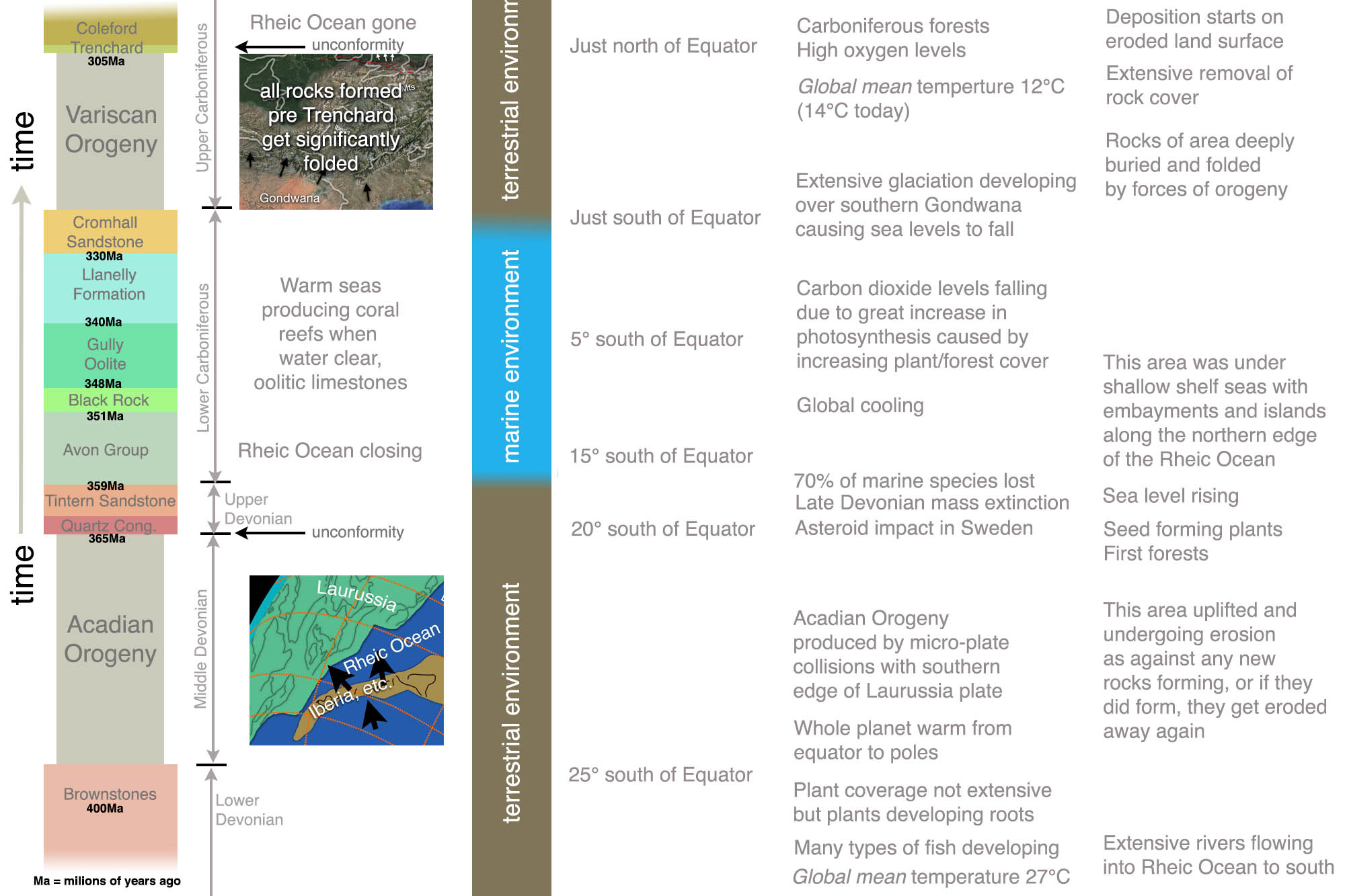 Well done you have completed the Voyage!\n\nThe diagram here and the audio track summarise the rocks, environments and events that you have encountered on this 100 million years Deep Time Voyage. Note: The diagram shows the timespan the various rocks formed over, not the thickness of the various formations. The duration of the ‘time gaps’ when no rocks are found in this area are considerable! In these periods sediments could well have been laid down and even lithified (cemented) into solid rock, only to be eroded away and lost to the rock record.

We began the Voyage on 400 million year old Devonian Brownstones, formed by great rivers wearing down mountains to the north and dumping the sediments on the flood plains before emptying into the Rheic Ocean to the south. Then came the impact from arrival of the micro-continents of Armorica and Iberia, producing the Acadian Orogeny as they impacted against the southern area of the Laurussia plate. The resulting uplift of the area, caused erosion of existing rocks, followed by deposition of the Quartz Conglomerate on that eroded Brownstones surface. The wearing down of the Acadian up-lifted land surface, combined with rising sea level, produced the slower flowing rivers that deposited the last Devonian rocks in this area – the Tintern Sandstone. Around this time the Earth also suffered the end Devonian mass extinctions, which had a severe impact on marine life, due possibly to anoxic (low oxygen level) oceans. The following Carboniferous period brought a change to marine conditions through the beds of the Avon Group, followed by the warm shallow water limestones of the Black Rock, Gully Oolite and Llanelly Formations. With the onset of a massive glaciation in the southern hemisphere due to big reductions in atmospheric carbon dioxide (due to the development of the extensive Carboniferous forests), sea level starts falling and we have the Cromhall Sandstone deposited by rivers onto a coastal plain more or less at sea level. The Gondwana plate advances northward crushing the Rheic Ocean out of existence and creating the great Variscan Mountain chain across southern Europe.

In this area the rocks were folded, producing the steep westward dipping rock beds seen in this Voyage. Eventually, deposition of new sediments returned in the form of the coarse sandstones of the Trenchard Formation, laid on an eroded surface of the older folded rocks – an unconformity. The Trenchard Formation was followed by the Coleford Member, a 305 million year old sequence of sandstone and siltstones, with some thick coal seams. The whole Voyage spans from 400 to around 305 million years ago. Which is tiny slice of the 4600 million years of the Earth’s life, but in that time, many changes occured, of which we have almost certainly unravelled only fragments of the whole story, based on the evidence left in the rocks. 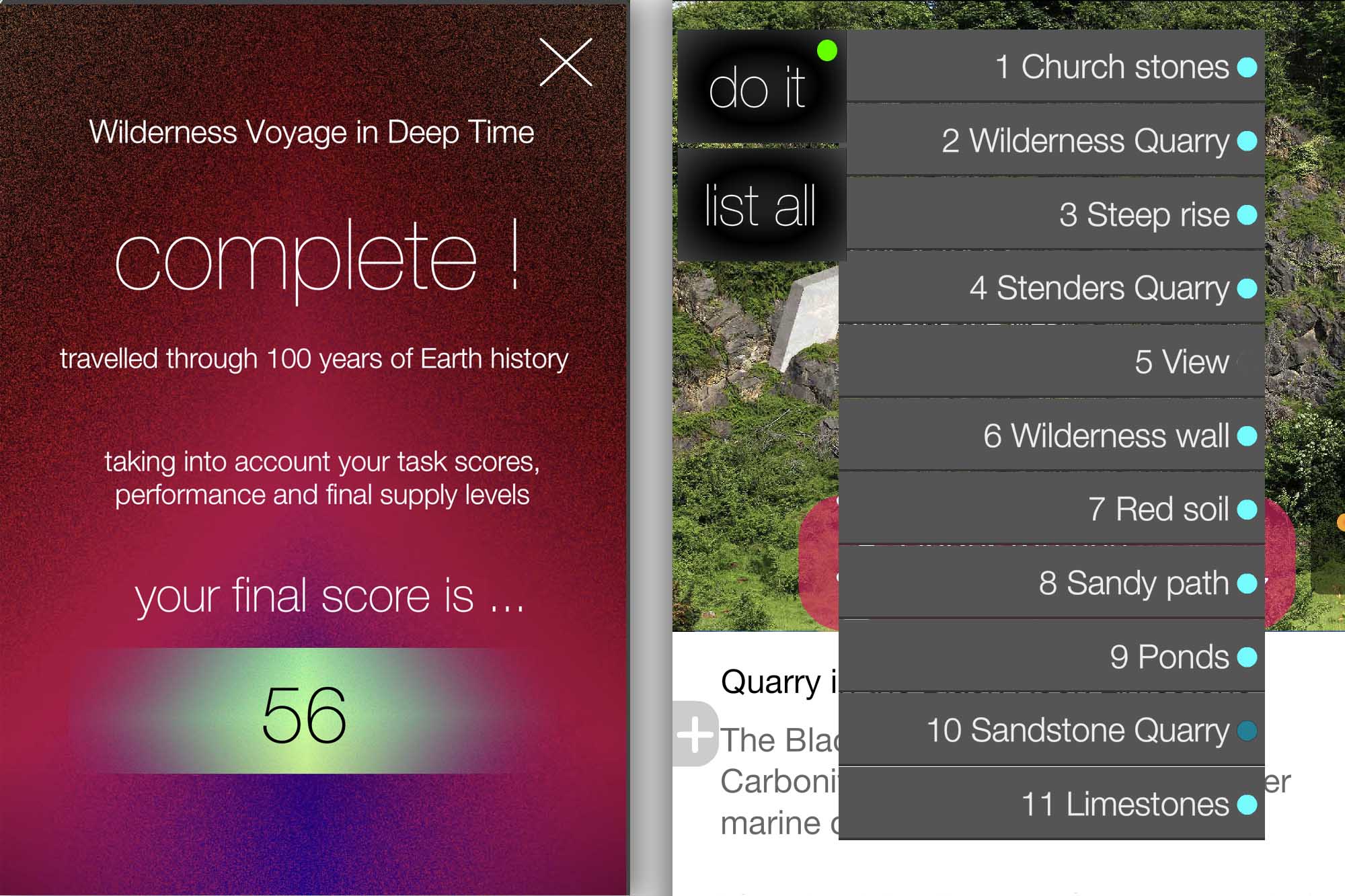 At the Voyage end

Getting a final score

When you have done all the questions for each task, you should have a final score displayed. If you don’t, it is because one more questions have not been answered. Check the blue indicators on the Task buttons. If an indicator is not showing, or it is flashing, then the corresponding Task has not been done, or only partially answered.

Your final score is likely to be different from the score showing in the health bars. This is because the calculation of the final score takes into account things like, how much supplies you have completed the Voyage with, is this your second or more attempt, did you do the Voyage in an unlocked state, did you top up your supplies, did you start a paused Voyage from a location more than 100 metres from where you saved it, etc.

Which of the these two alternate interpretations presented above, of the rock configuration underground in the Voyage area do you consider is correct?

In the arrangement in diagram A, would the rocks get younger or older as you travelled from east to west in the Voyage are?