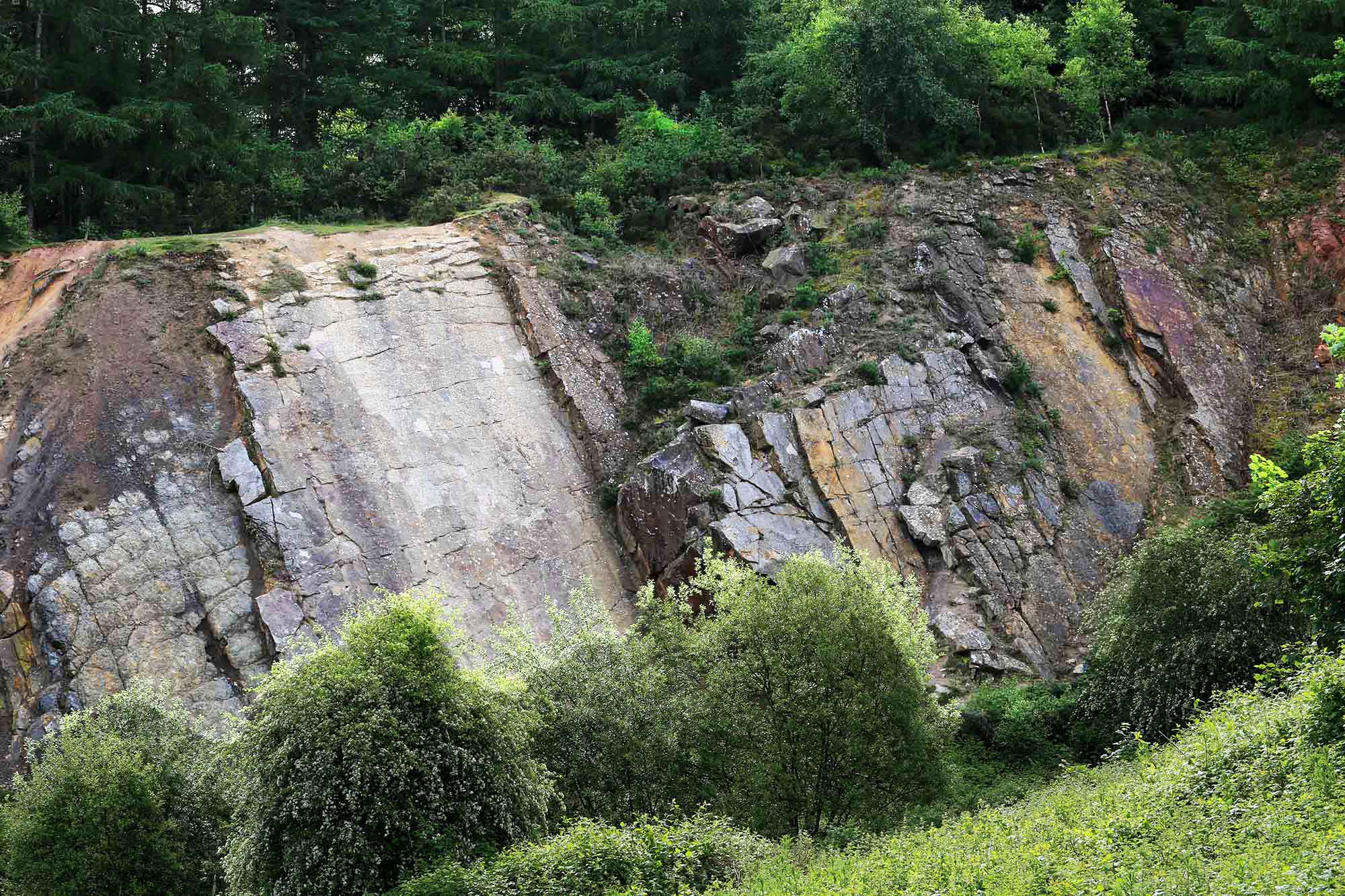 The sandstones are a light buff colour (the sand in the path at Task 8), but also display when freshly exposed a beautiful range of colours – yellow, rusty red, purple and shades of brown. All of these colours are due to various forms of iron oxide. The rocks of this area have been ‘bathed’ in ground water rich in dissolved iron. So much in fact that a very productive iron mine once existed near here. The entrance, now sealed off, was close to the entrance of the quarry. In 1837 the shaft was excavated to a depth of 168m (550 feet) to intercept the Gully Oolite which has deposits of iron. From the base of the shaft the mine was excavated to the north and south along the line of the Gully Oolite and its rich ore deposits. These sandstones are known as the Cromhall Sandstone Formation (it used to be known as the Drybrook Sandstone in the Forest of Dean). These Carboniferous sandstones are around 326 to 343 million years old. 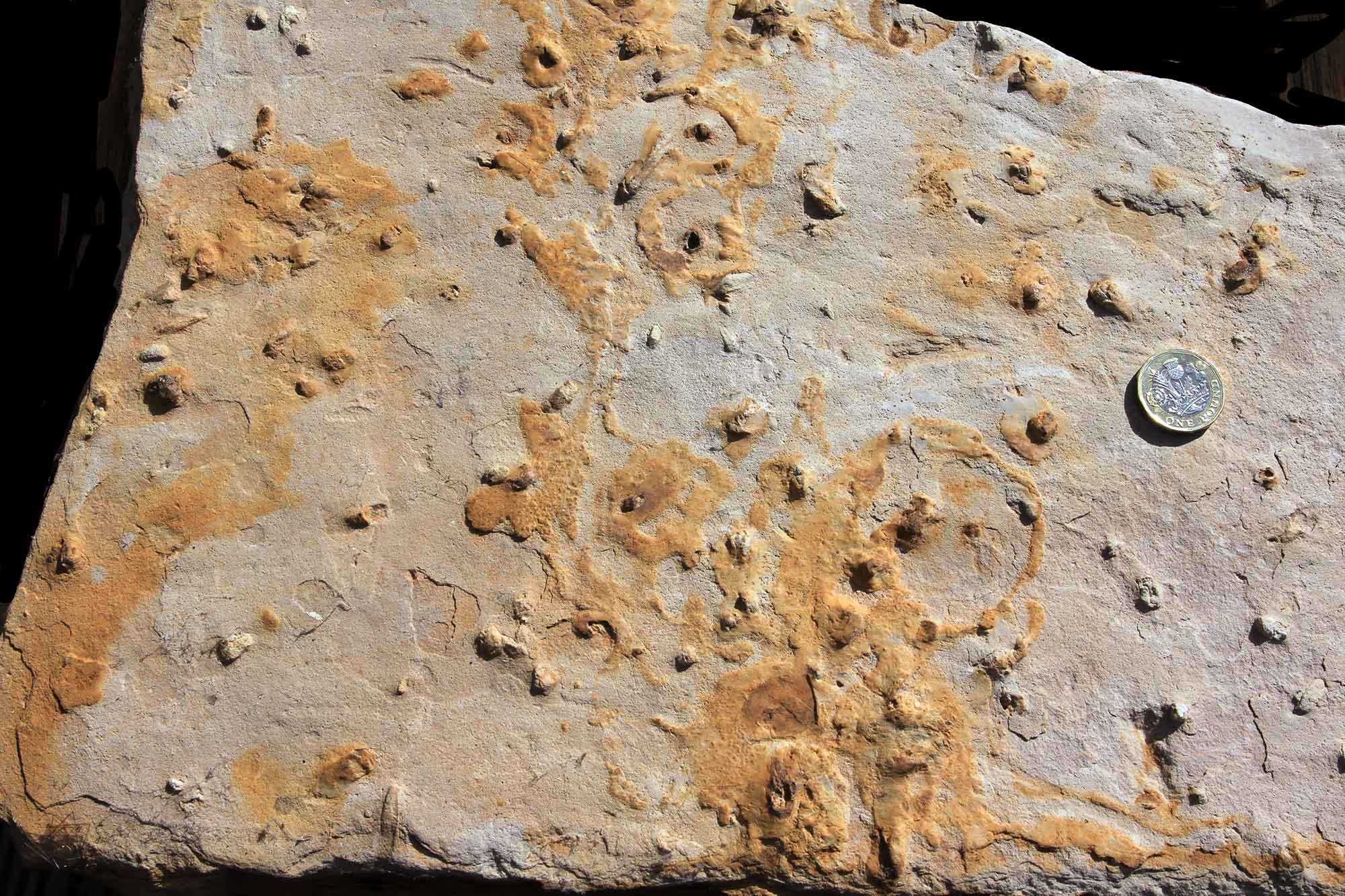 Several of the bed surfaces feature rusty looking marks like these. This is an ancient soil in which Carboniferous plants were rooted. The rusty marks are where stems or roots were once present.

This kind of feature can often be found beneath a coal seam (after all coal seams are the product of large quantities of once living trees and other plants) and so are called seat-earths. Another name is ganister, especially when the sandstone is essentially all quartz (silica rich). 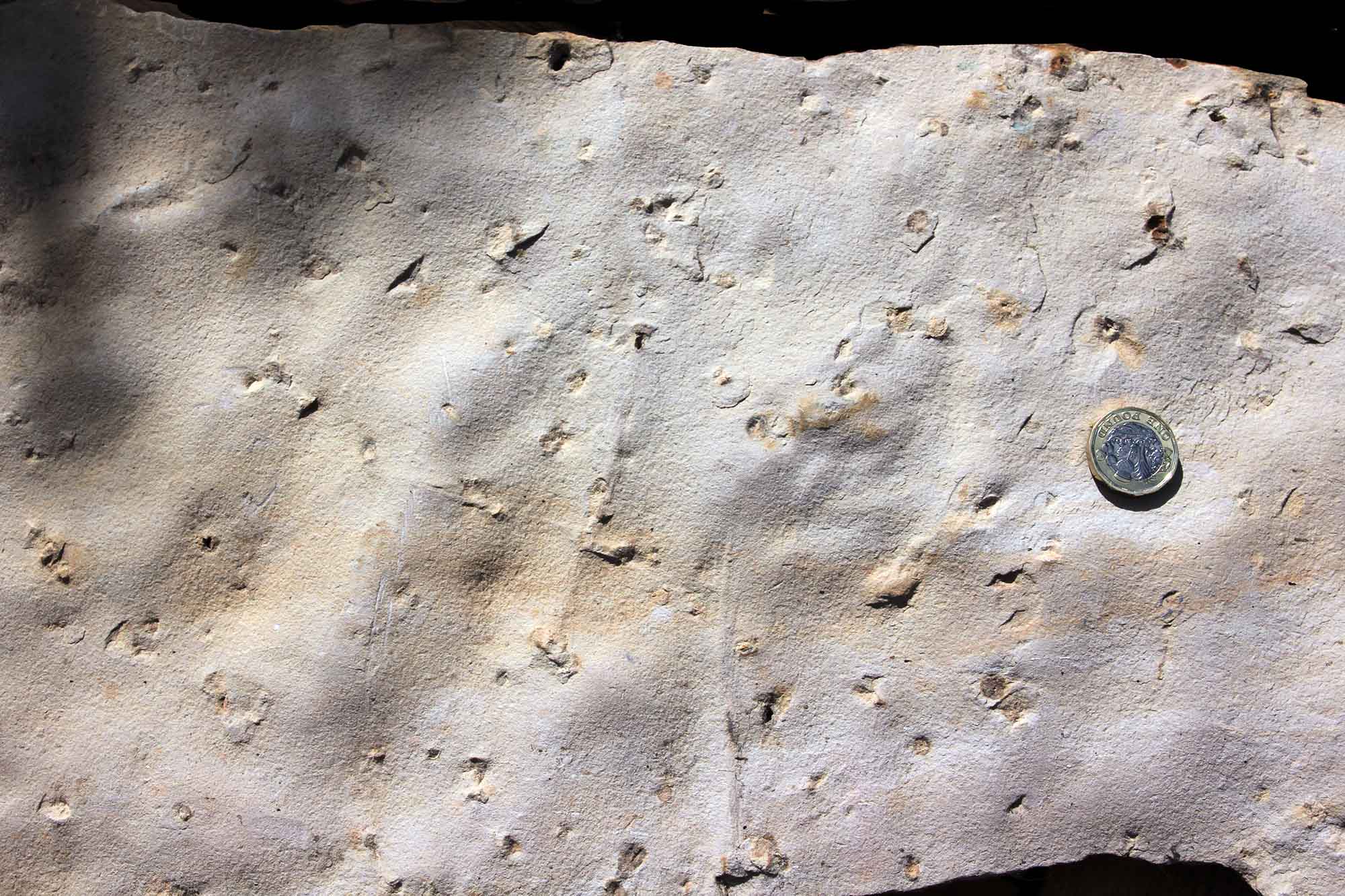 Ripples and traces of stems

We can picture an environment around 330 million years ago, where shallow water gently washes back and forth around the stems of plants growing in an area normally just above average tide level.

The ripples appear fairly symmetrical, so unlike the strongly asymmetric ones at the Wilderness Quarry, these would be produced by water swishing back and forth, rather than flowing in one direction. Ripples like this show this area was at or just above sea level. Thin limestones would be produced during a period when the sea invaded giving rise to deeper water conditions for a time. 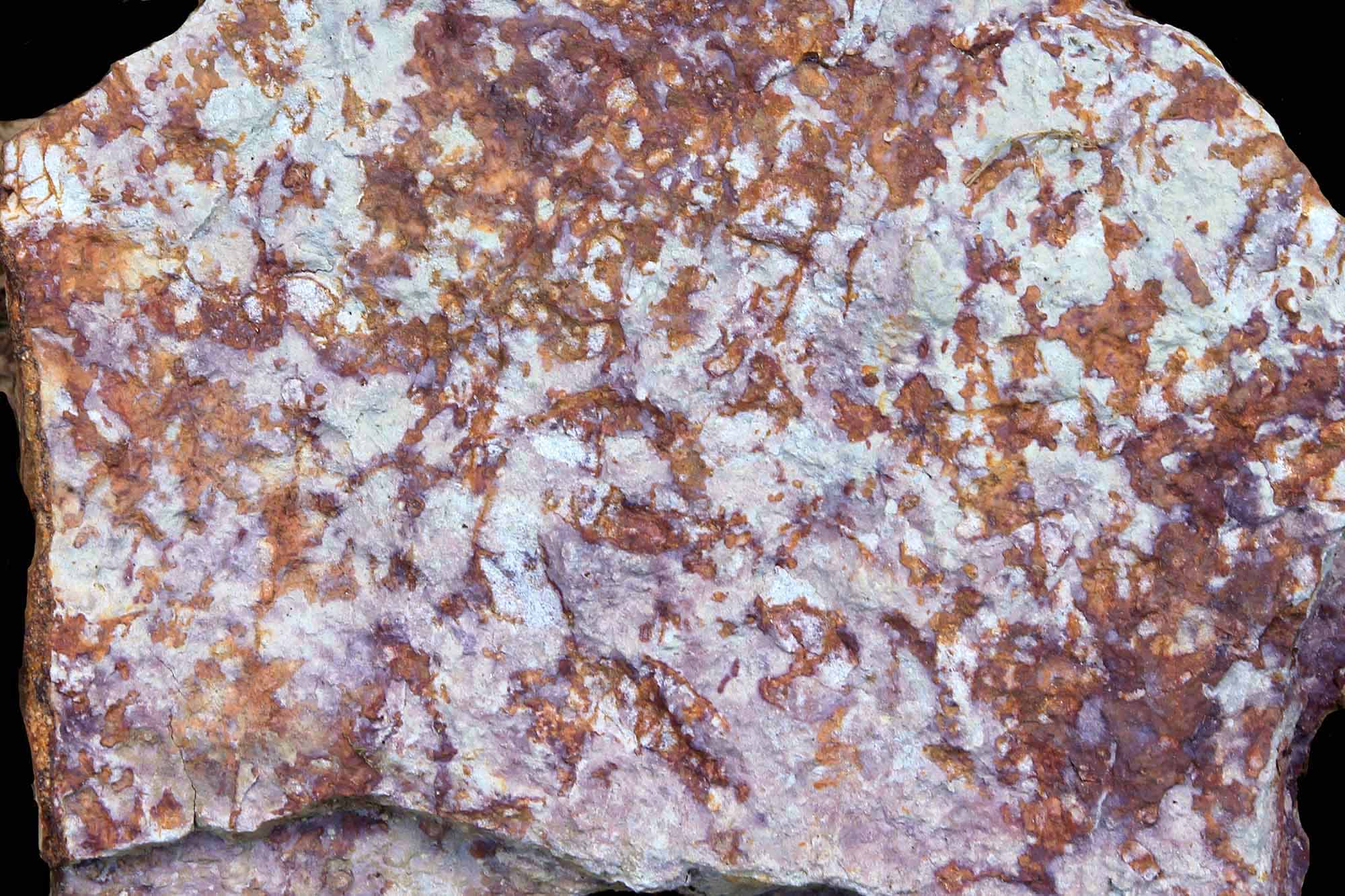 Where did the iron in these rocks come from?
Some may be from the plants that once grew in these sands when it was a river delta environment, close to the edge of the sea. Ground water carrying iron in solution, flowing down through this rock from rocks that were once above (now eroded away).
It has been suggested that the source rocks for the iron could have been the red rocks of the Triassic desert conditions, that probably once covered this area. 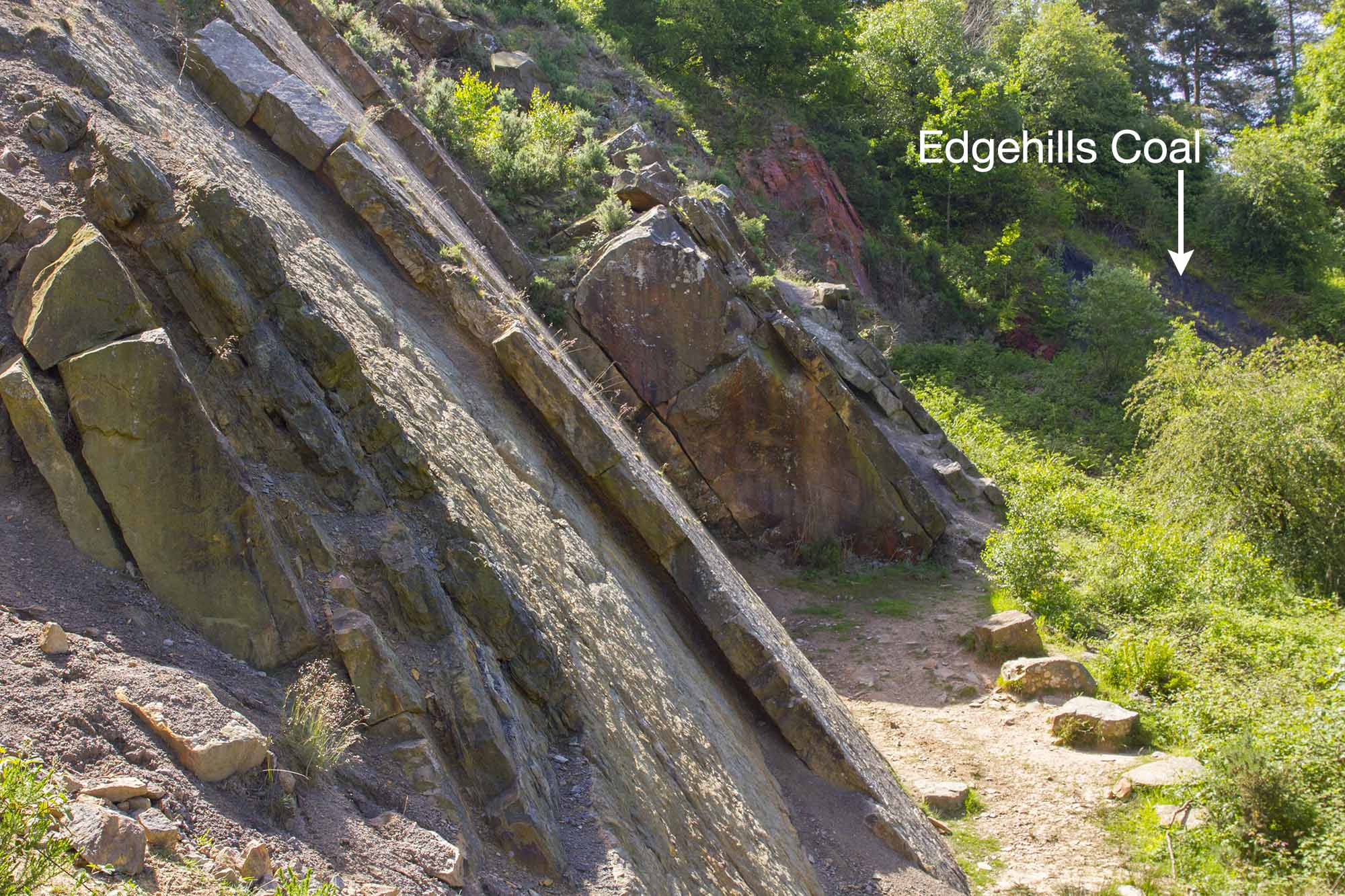 Signs of the coming rainforests

In the SW corner of the quarry (top right corner of photo) the beds look black. Close up they are a soft crumbly coal.They have been named the Edgehills Coal after the name of this area.

Coal is formed over millions of years from compression of what was once decaying plant debris. This is the first hint of the coming Carboniferous rainforests, whose remains form extensive coal deposits around the world, including here in the Forest of Dean. Spores of these ancient plants extracted from the Edgehills Coal have allowed geologists to date these rocks to around 310 million years old. In the picture the rocks get younger from left to right. Notice the iron rich sandstone not far below the black of the coal.

What type of environment for the formation for these rocks is supported by the evidence?

The occurrence of coal on the western side of the quarry suggests which of the following may have been happening over time?

What was the temperature of the sea water most likely to have been?