Deep time is the concept of geologic time, the vast unimaginable 4.55 billion years of our planet’s history.
The concept of ‘deep time’ has its origin with the Scottish geologist James Hutton, he and a fellow scientist John Playfair, visited Siccar Point in 1788, there they examined rock beds, old in themselves, but sitting on top of upturned beds, which must have been even older. Reflecting on their observations,  Playfair wrote the famous words; “The mind seemed to grow giddy by looking so far back into the abyss of time,” Hutton and Playfair, could not give a figure to the age of the Earth, that would have to wait until the work of Artur Holmes in the twentieth century, using the decay rates of long-lived radioactive elements in rocks. The words ‘deep time’ were first used in relation to geologic time by the American author John McPhee in Annals of the Former World.

Below, scroll down a timeline spanning 4.55 billion years. To give a degree of familiar reference, a scale of one year is placed on the timeline, with January 1st corresponding to the beginning of the Earth and midnight on December 31st to the present. On this scale even the thinnest line is too thick to accurately depict humanities presence on the Earth. Of the current Voyages, the one to the Malvern Hills, crosses rocks with an origin of around 670 million years ago. On the one year time scale, those rocks formed around 10th of November – the dinosaurs walked the Earth around mid-December for about a week. To find the oldest known rocks on Earth, you need to visit Austalia (Jack Hills) Zircon crystal dated at 4.375Ga or Canada (Quebec) 4.28Ga or Greenland. 3.7Ga.  (Ga = 1000’s of millions of years before the present).

That long scroll down to reach this text echoes how ‘deep’ the history of the planet is.  Representing 4600 million years (4.6Ga – giga) to scale is not easy. You will find this same scale in the Voyager app when you touch the clock. In the app you can view planetary plate configurations from the deep past along with the occurrence of impacts from space, major volcanic events, extinction events and atmospheric oxygen and carbon dioxide levels through time.

On this scale most of the geology we encounter today involves rocks formed and live forms evolved in just over the last month of that year! A lot of Earth history for the first ’11 months’ is represented by small exposures of ancient rocks in places like NW Scotland, Greenland, Canada and Australia.

What does the dark red line at the top of the scale (above the Neogene) represent?
This is the Quaternary period, which spans the last 2.58 million years. The diagram below shows how the Quaternary period is further subdivided into Epochs and Ages. This subdivision also applies to the other periods like the Jurassic. The boundaries between all these time intervals is set by the International Commission on Stratigraphy. 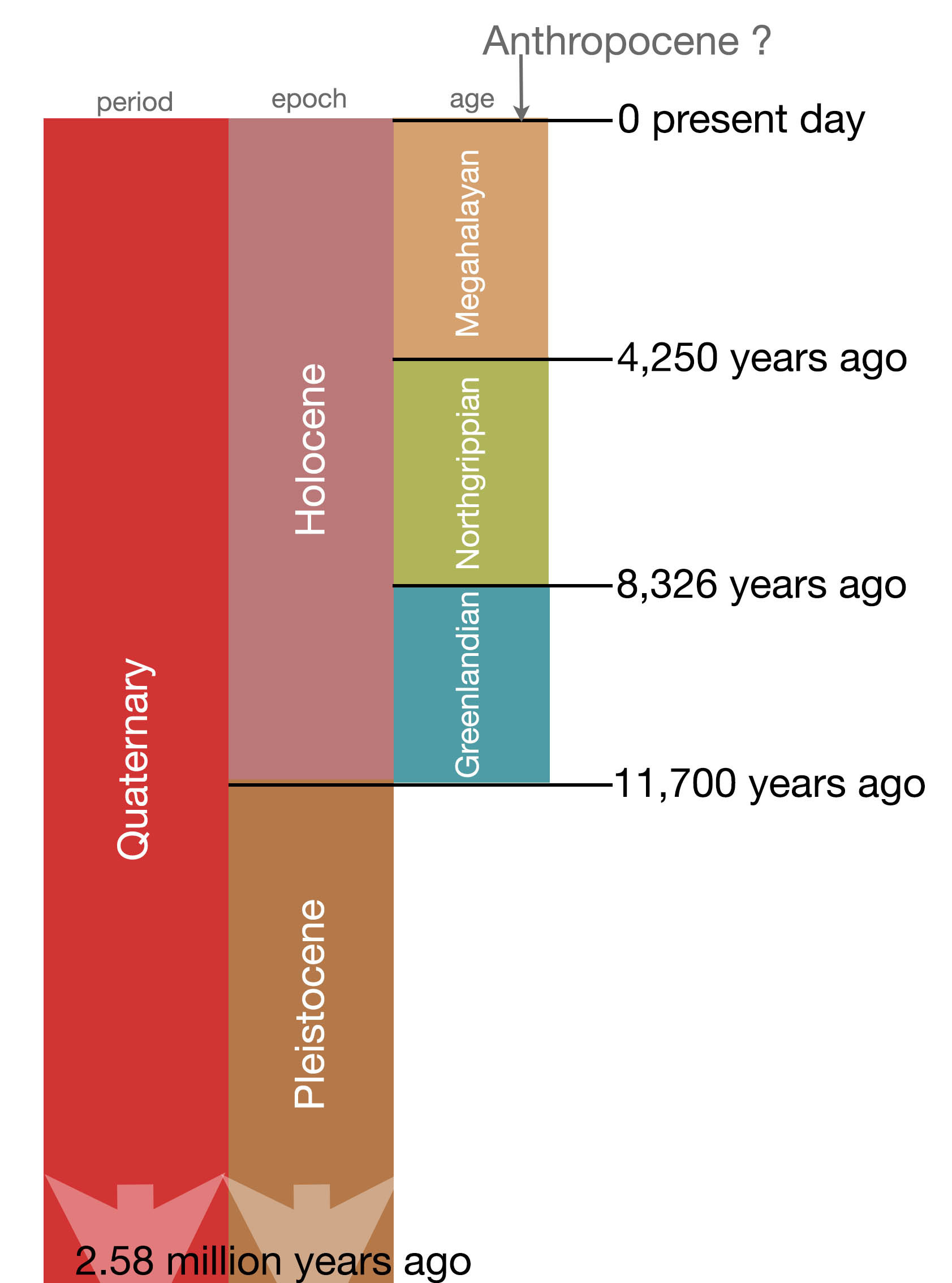 The time boundaries are decided on the basis of a significant event which is well represented in the rock record at some location. For example, the start of the Greenlandian is based on an ice core sample from  the North Greenland Ice Core project. The core marks the end of the Younger Dryas – a brief period of return to near glacial conditions. The current Megahalayan is based on a formation preserved in a cave in Megahalaya in northeast India.

Many would like the International Commission on Stratigraphy to official adopt the Anthropocene as an age, or maybe a new epoch or period, marking the time when humanity became a significant force in shaping the planet. Some have suggested 1945 as a time horizon, as that was the year of the first nuclear bombs, which will have left a signature of radioisotopes in the rocks forming at that time.

Some of the maps used in Voyages contain the words ‘Monsters of the Anthropocene’, to signify dangers from traffic. Vehicles being a threat to life in this age, perhaps just as much as the larger lifeforms of the past.