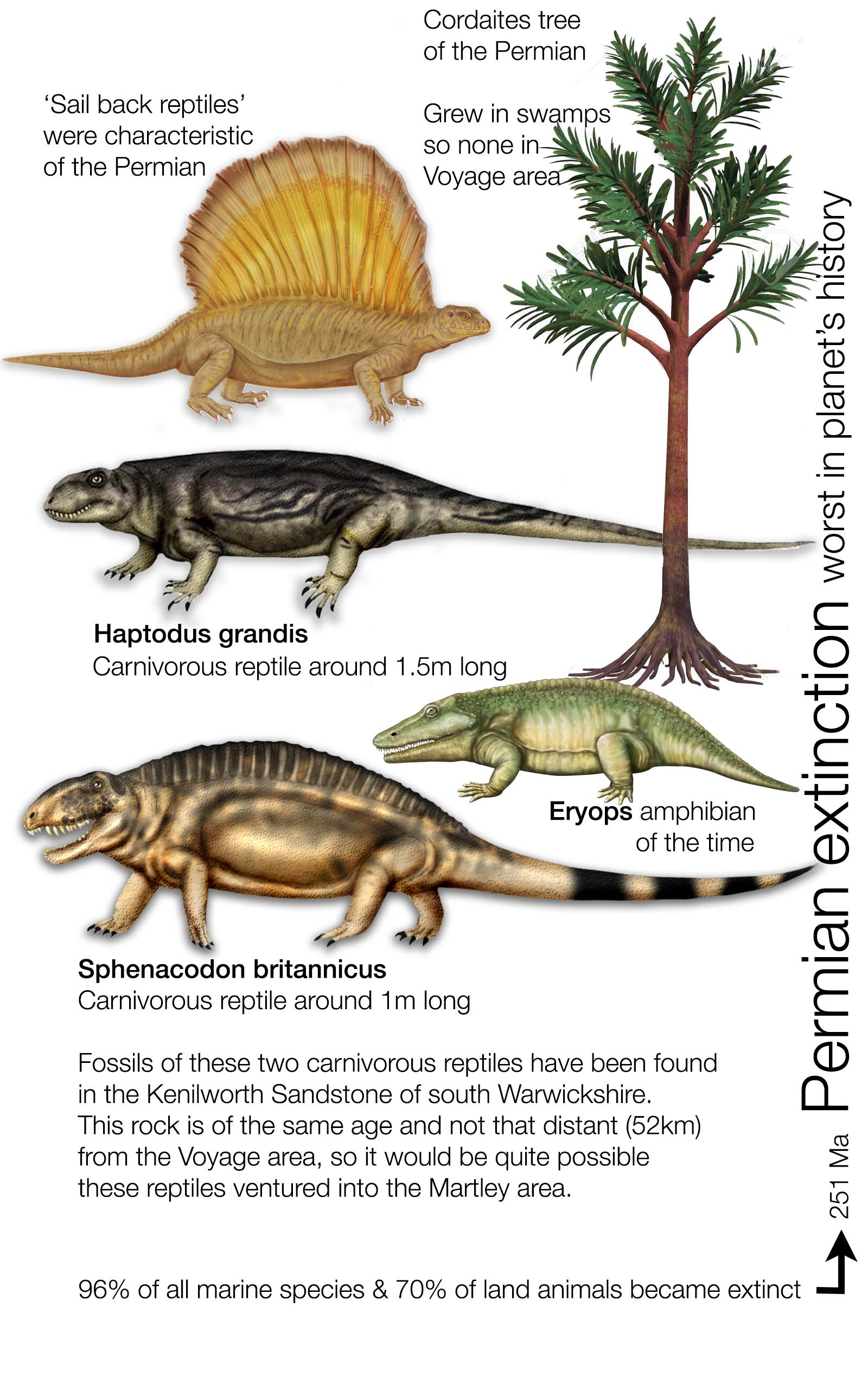 The harsh desert conditions that prevailed in this part of the Earth during the Permian were not conducive to the preservation of any lifeforms. That does not mean that living things were not present, we only have to look to the world today to see the tenacity which life has for surviving in extreme environments.  Around 52 kilometres to the north-east in the Kenilworth area of south Warwickshire, occurs a red sandstone with beds of red mudstone and conglomerate, named the Kenilworth Sandstone Formation. This is considered to date from the late Carboniferous through to earliest Permian and therefore of similar age to the Haffield Breccia. The Kenilworth Sandstone has yielded the remains the Haptodus and Sphenacodon reptiles, illustrated above. Given the age similarity and close proximity it would not be unreasonable to suggest these reptiles would have ventured into the area where the Haffield Breccia was being deposited.

The ‘Sail Back Reptiles’ were a signature group of the Permian, although no remains of these have been found in the Kenilworth Sandstone Formation. It has been suggested the sails functioned as heat exchangers to warm the creatures in the early morning sun following the cold of the desert night.

No fossil evidence of plant forms have been obtained from the area. In general plant life in the Permian is represented by conifers, ginkgos, cycads, and other drought-resistant plants. The southern hemisphere, although cold and arid, had extensive forests of Glossopteris (‘tongue fern’ in Greek) trees. These trees gave rise to large Permian coal reserves, controversially, now being mined in Australia. The northern hemisphere of the Permian time was dominated by the hot desert conditions of the vast Panagea super-continent.

The end of the Permian is marked by what is considered the largest mass extinction of life in the Earth’s history. The event depleted from the tree of life 96% of marine species and 70% of the species of land animals. This end-Permian extinction event is greater in magnitude than the renowned mass extinction around 66 million years ago that ended the dinosaurs dominance. The cause has often been related to huge eruptions of basalt in Siberia around the end of the Permian. These eruptions spewed out 4 million cubic kilometers of lava  Such immense and sustained eruptions would have released huge amounts of carbon dioxide and sulphur dioxide into the atmosphere. This would lead to heating of the atmosphere and acidification of the oceans. However the full story remains uncertain, as studies of rock layers bearing fossils that were deposited through this time, indicate the duration of the extinction was very short on geological timescales, perhaps a couple of centuries. Some critical tipping point for life’s survival was reached very rapidly.