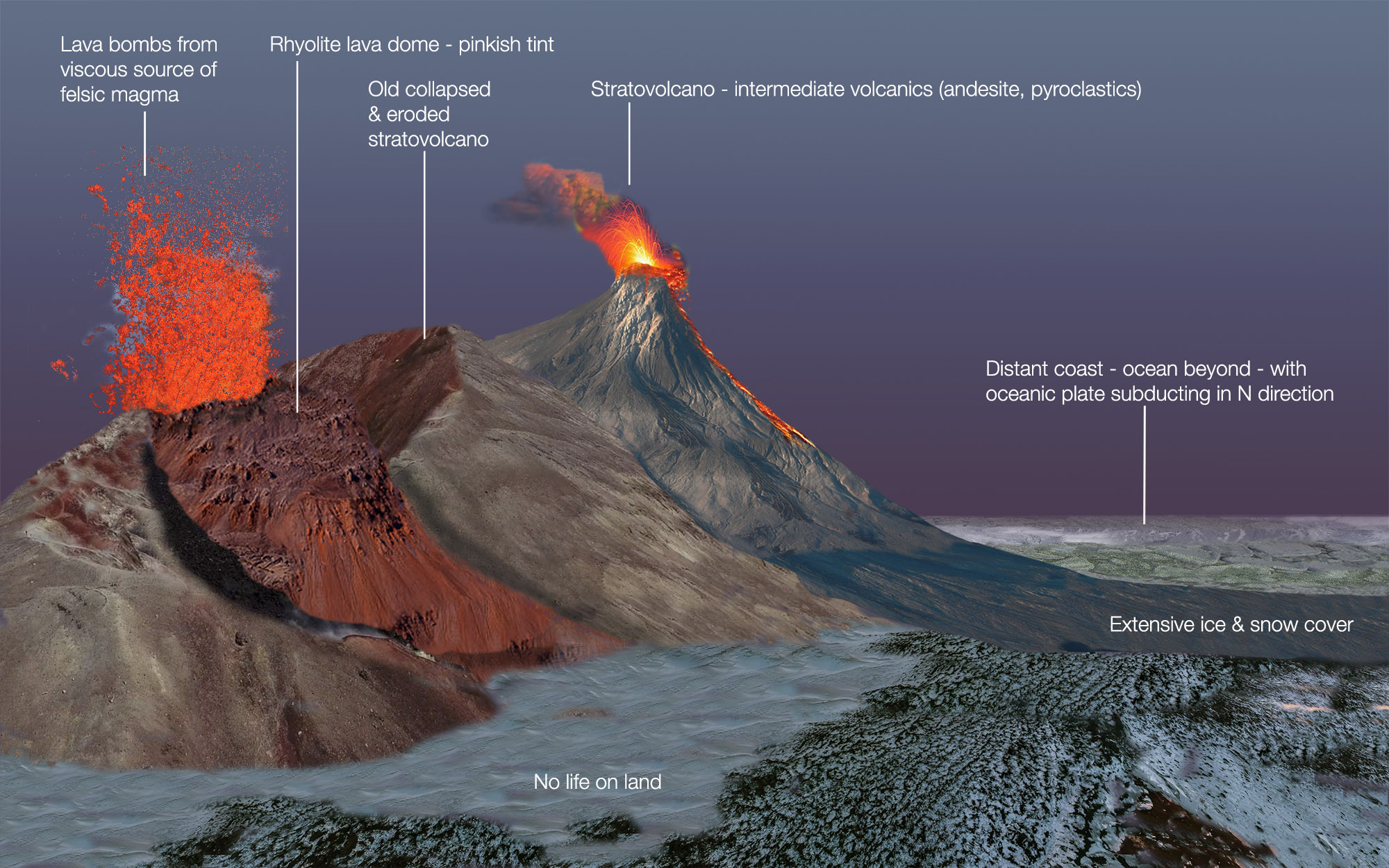 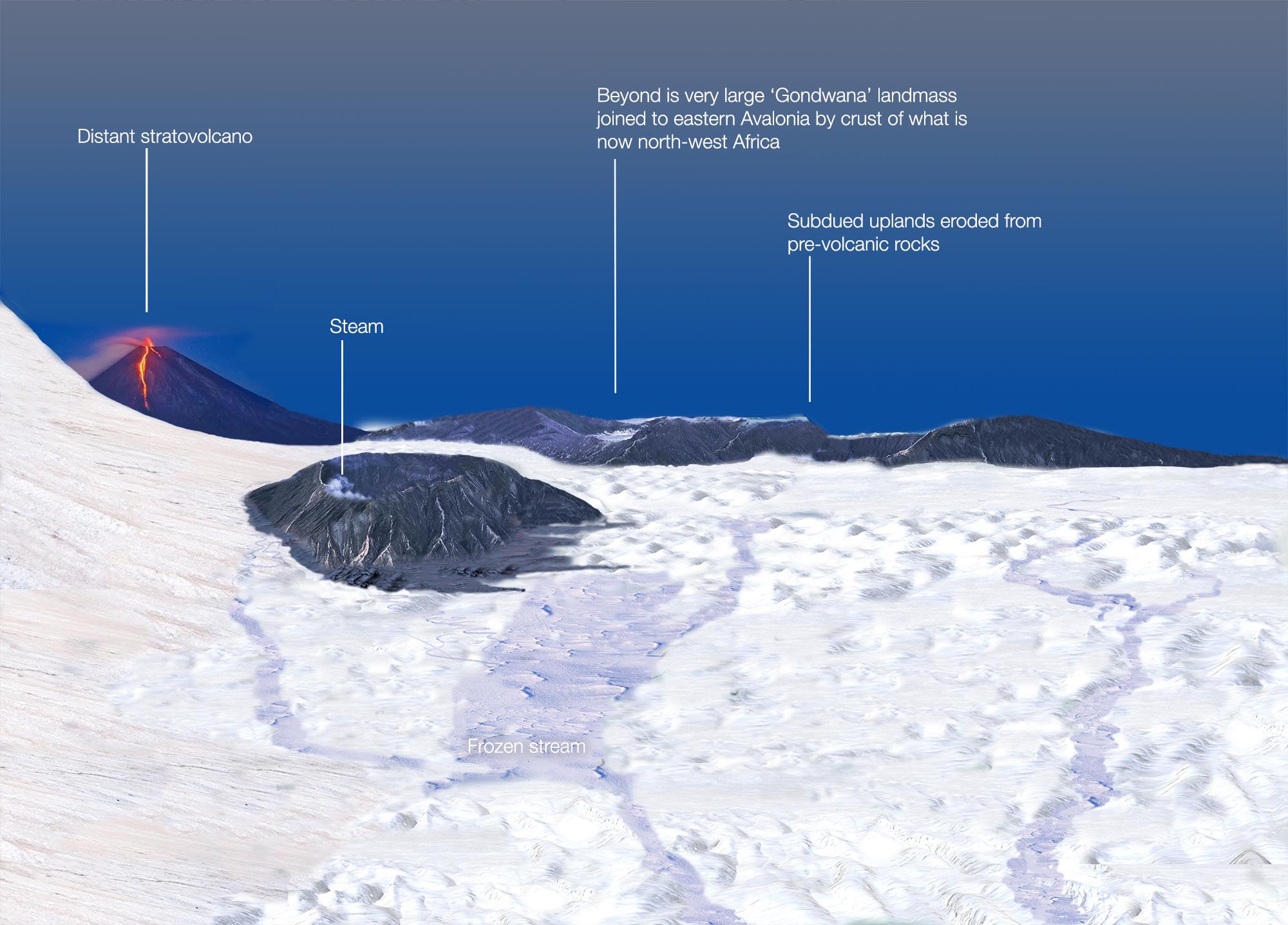 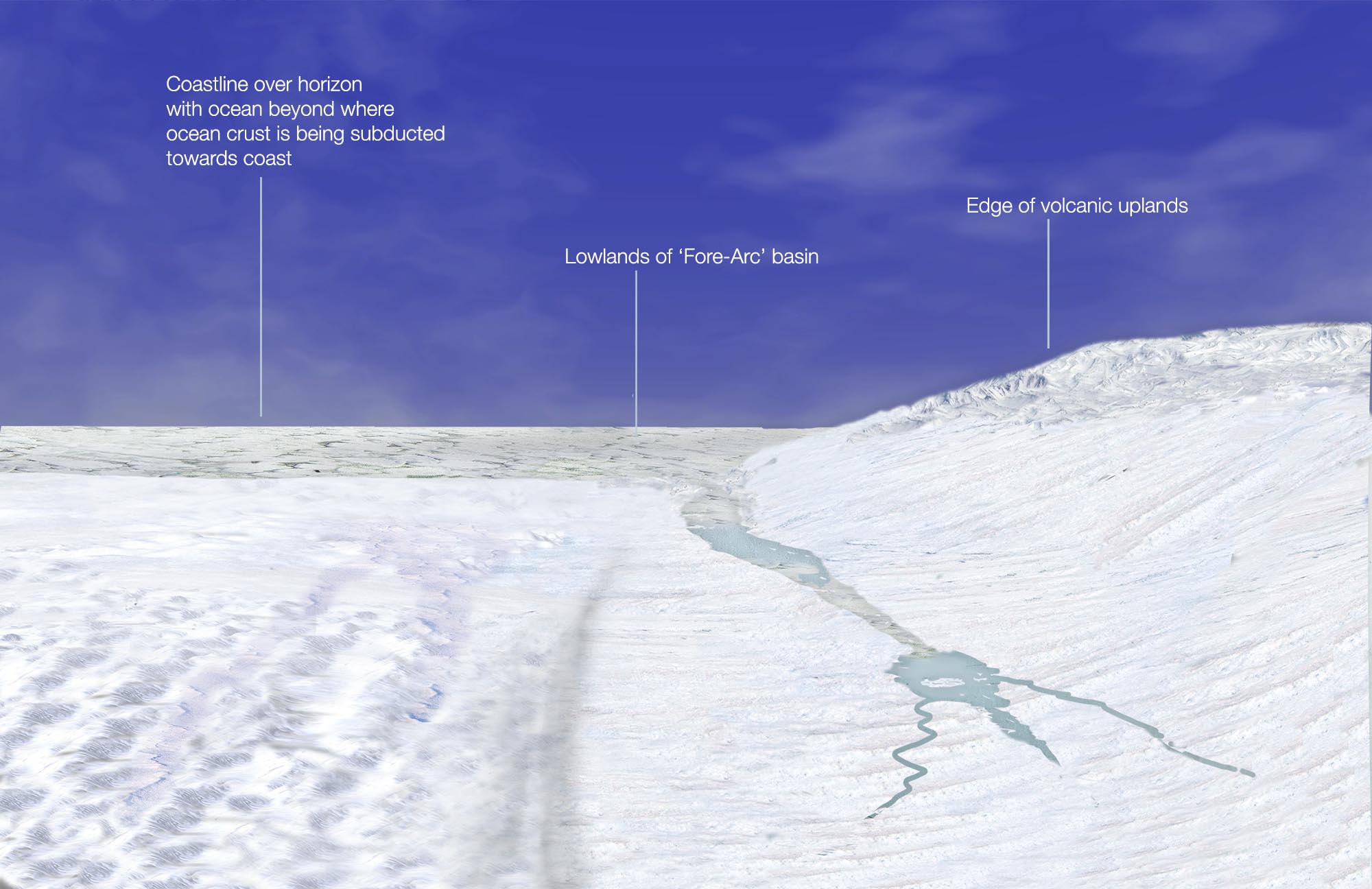 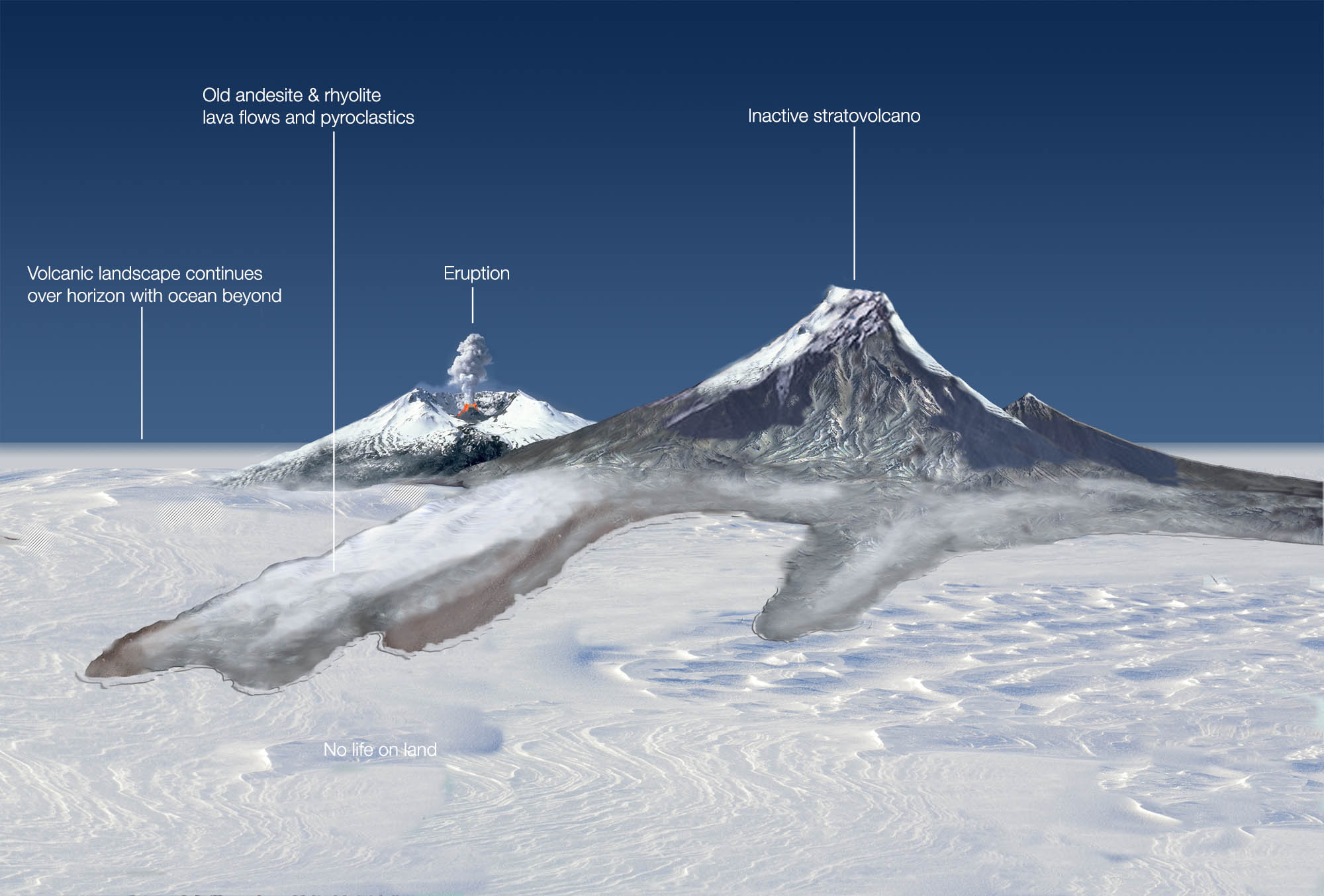 These illustrations are schematic environmental reconstructions for the time and location of the
Malverns Complex main magmatic event,  approximately. 680 to 670 million years ago, in the Cryogenian Period

The location of the event was around 60 degrees south of the equator, based on palaeomagnetic data.The climate would have been very cold due to the high southern latitude, plus evidence this was a time when the planet was a ‘Snowball Earth’ with polar ice sheets reaching almost to the equator,

It is important to appreciate the rocks formed from the surface volcanic activity depicted in these illustrations are not the rocks that constitute the Malverns Complex today. The rocks of the future Malvern Hills were  crystallising in the deep magma chambers that fed the surface volcanics. The underling cause of the volcanic activity was subduction of oceanic crust beneath the area.

Each of the views shown above was rotated 180 degrees back in the Cryogenian, so what above is labelled as West View was East, North was South and vice versa. This happened because the plate on which this part of the crust was located rotated – plates do not just move laterally.

The type of volcanics associated with this magmatic event is called calc-alkaline and is typified by igneous rocks that form where continental crust has oceanic plate melting beneath it as the oceanic crust is subducted into the mantle, The resulting surface volcanics are typified by andestite and rhyolite – which implies explosive volcanoes, classic stratovolcano cones, pyroclastic flows and viscous ‘sticky’ lavas. The types of igneous rock which crystallised from the underground magma would be diorite and granite. Those are the rock types that constitute the bulk of the Malverns Complex, but as befits the name, things are not that simple as there have been many additions and alterations from later intrusions and metamorphic events, as would be expected for a piece of the Earth’s crust that has been around for more than half a billion years, moved thousands of kilometres over the planets surface and been caught up in several plate collisions and mountain building events.

There is no fossil evidence to indicate any form of like existed on the land at this time, regardless of the inhospitable conditions. Beneath the frozen surface of the sea primitive multi-cellular lifeforms were present. Due to the extreme southern latitude, the Sun would have shone at a low angle from the northern sky, which allowing for the plate rotation (see above) would place the sun shining into the South view picture. The Sun was slightly less bright earlier in the Earth’s history, but the Earth was rotating slightly faster, giving a calculated day length for this time of 20 hours giving 420 days in the year.

Cryogenian Period extending from 720 to 635 million years ago. The period before the Cryogenian is known as the Tonian. The close of the Tonian is associated with the break-up of the Rodinia supercontinent.

The main igneous (magmatic) event forming the rocks of the Malverns Complex dated at between 680 and 670 million years ago, is shown on a timeline spanning from the present to nearly 900 million years ago. The event is located in the Cryogenian Period, so called as it appears to have been an intensely code period in the planets history, with two major glaciations which extensively covered the planet, even into normally tropical regions. (Cryogenic stems from the Greek cryo for cold).