4 Shire view
Back to map 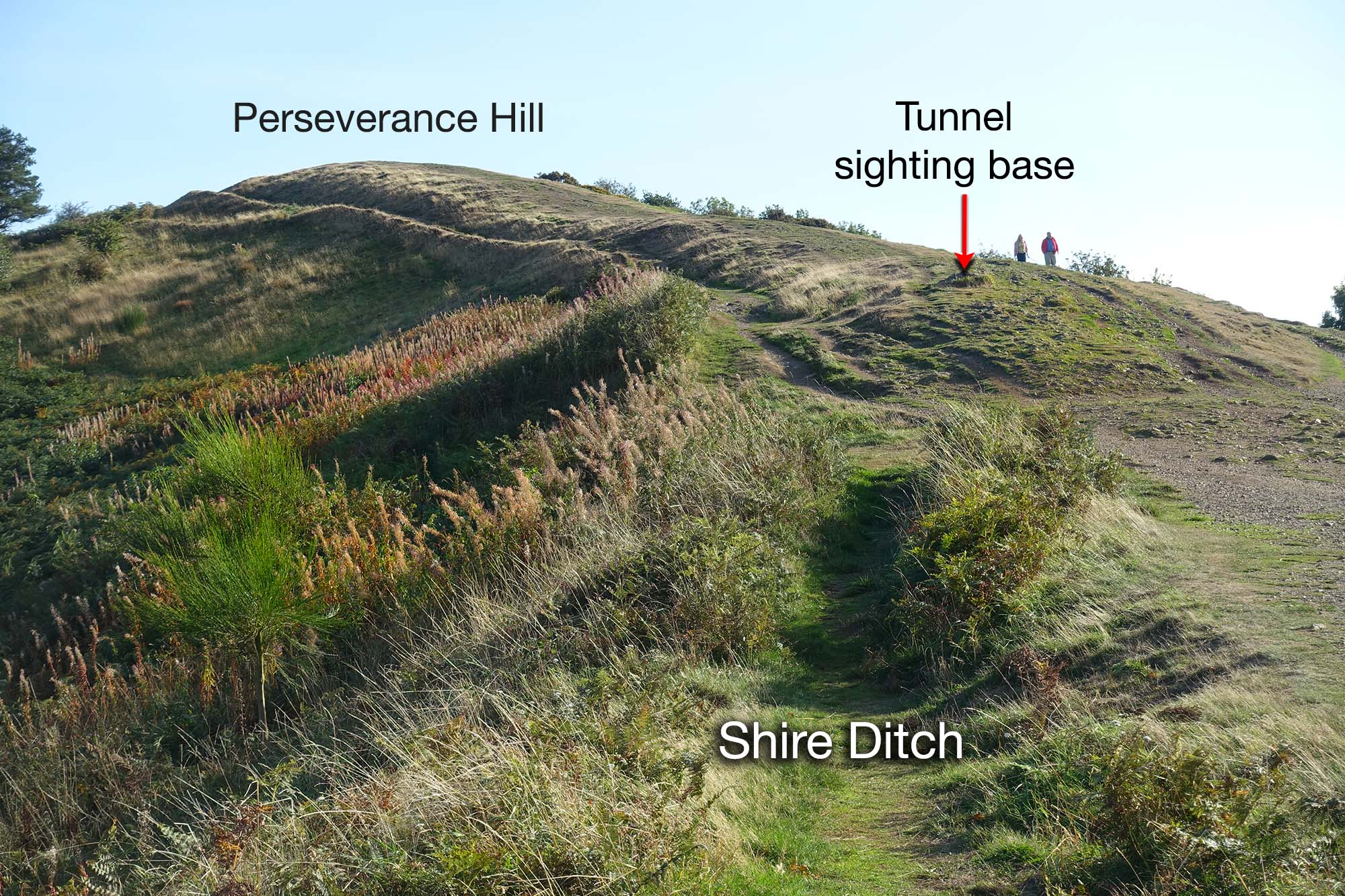 Shire View lies about halfway between the Wyche cutting and the top of Perseverance Hill. This View is a good place to observe the medieval Shire Ditch. From here you will also have an excellent view of the landscape in all directions, but especially to the west. To the north lies the Worcestershire Beacon, the highest point on the Malvern Hills (425m in elevation). Immediately below, you can see the railway curving from Malvern into the tunnel lying deep beneath your feet. This was a difficult piece of engineering.

The Shire Ditch runs the whole length of the Malvern Hills. At the point where you are now standing, it sits on the eastern edge of the ridge, and then curves southward and upwards towards Perseverance Hill (site no. 5). It is now a shallow dry ditch, well used by walkers. Although it probably started out as a Bronze Age earthwork, the feature as we see it was rebuilt and extended by the Earl of Gloucester (sometimes known as the ‘Red Earl’), partly to prevent cattle wandering across the local parish boundaries. It became the subject of a heated dispute between the Red Earl and the Bishops of Hereford and Worcester, both of whom had been granted hunting rights by the monarch. The ditch now forms the county boundary throughout most of its length. 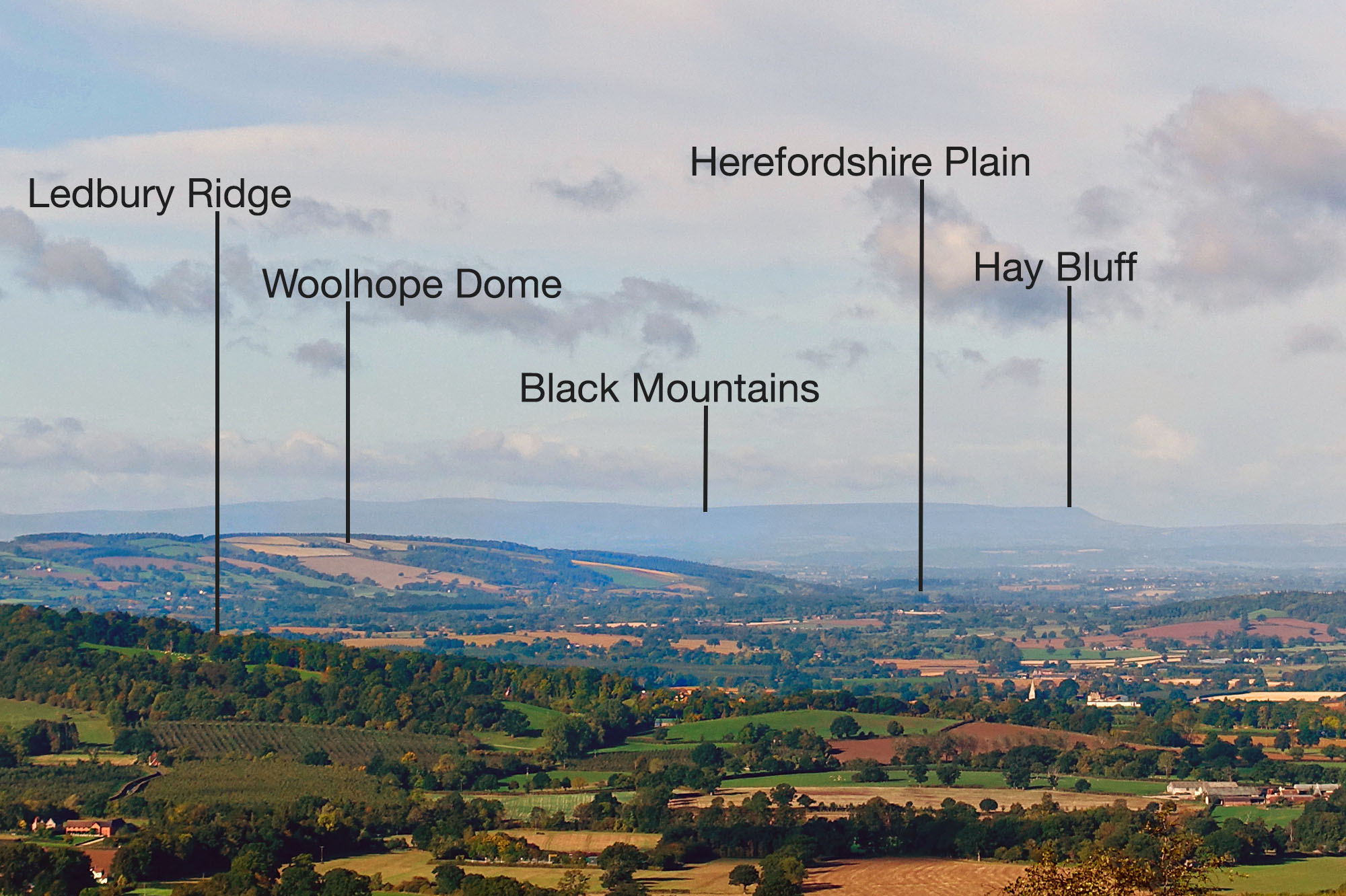 From this viewpoint, look west into Herefordshire. With the aid of the photos, the key things you might pick out include:

Near distance: wooded ridges running north-south. These are on limestone rock.

Middle distance: the Herefordshire plain, underlain largely by mudstones and sandstones, which give rise to the rich red soils of the county.

Far distance: The Black Mountains of Wales, about 40km (27m) away. 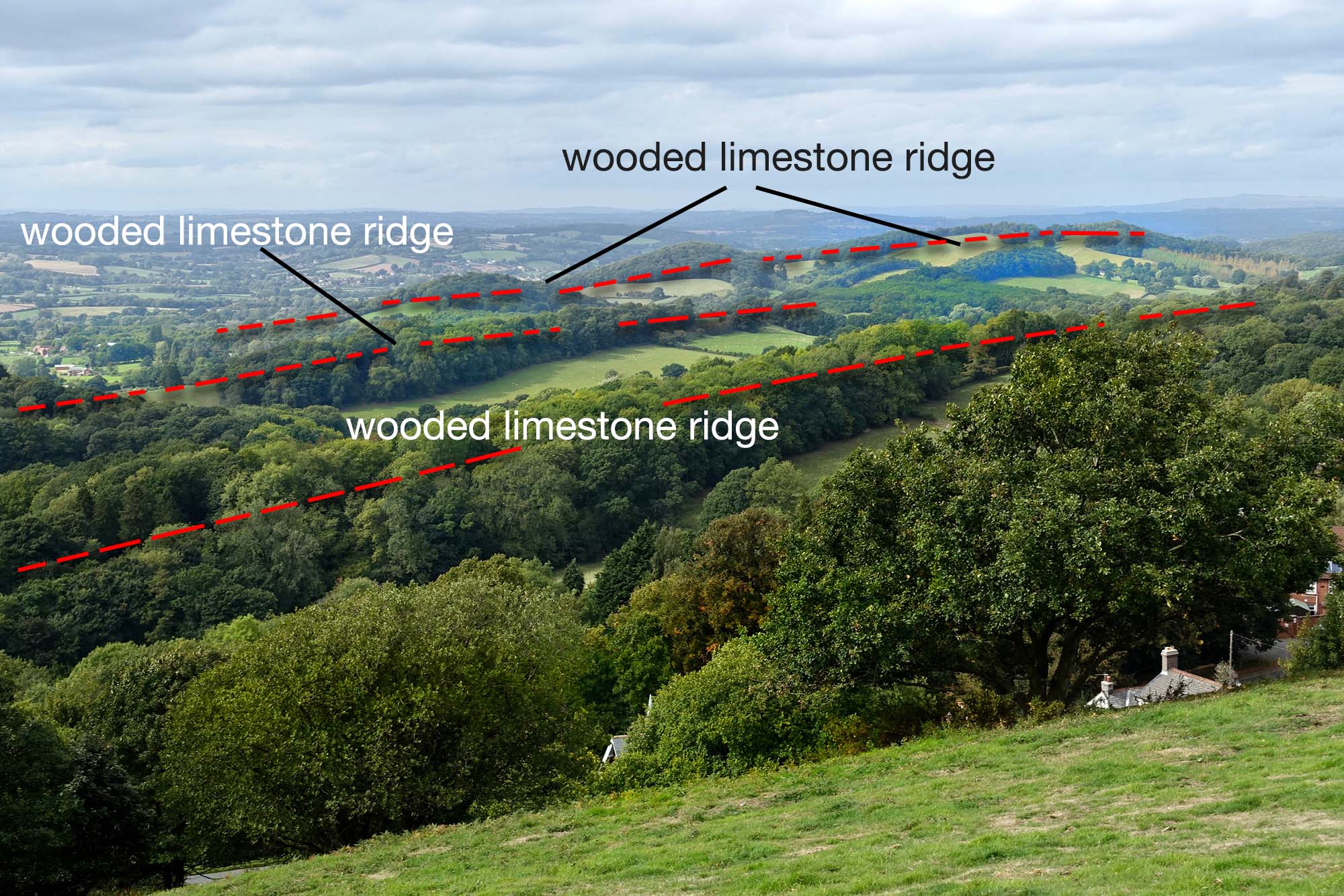 The wooded ridges, best seen to the north-west, are made of limestone, which is a relatively hard rock. The shallow valleys in between are composed of softer shales. All these rocks have been tilted by earth movements, with the greatest degree of dip (c. 60 degrees) closest to the Malvern ridge. As one moves further west, the dips become less (see diagram below). To your left you can see another prominent wooded limestone ridge about 5 miles away. This is the Ledbury ridge. Beyond that, there is a rounded feature which is called the Woolhope dome, composed of alternating hard and soft rocks lying in a concentric fashion. 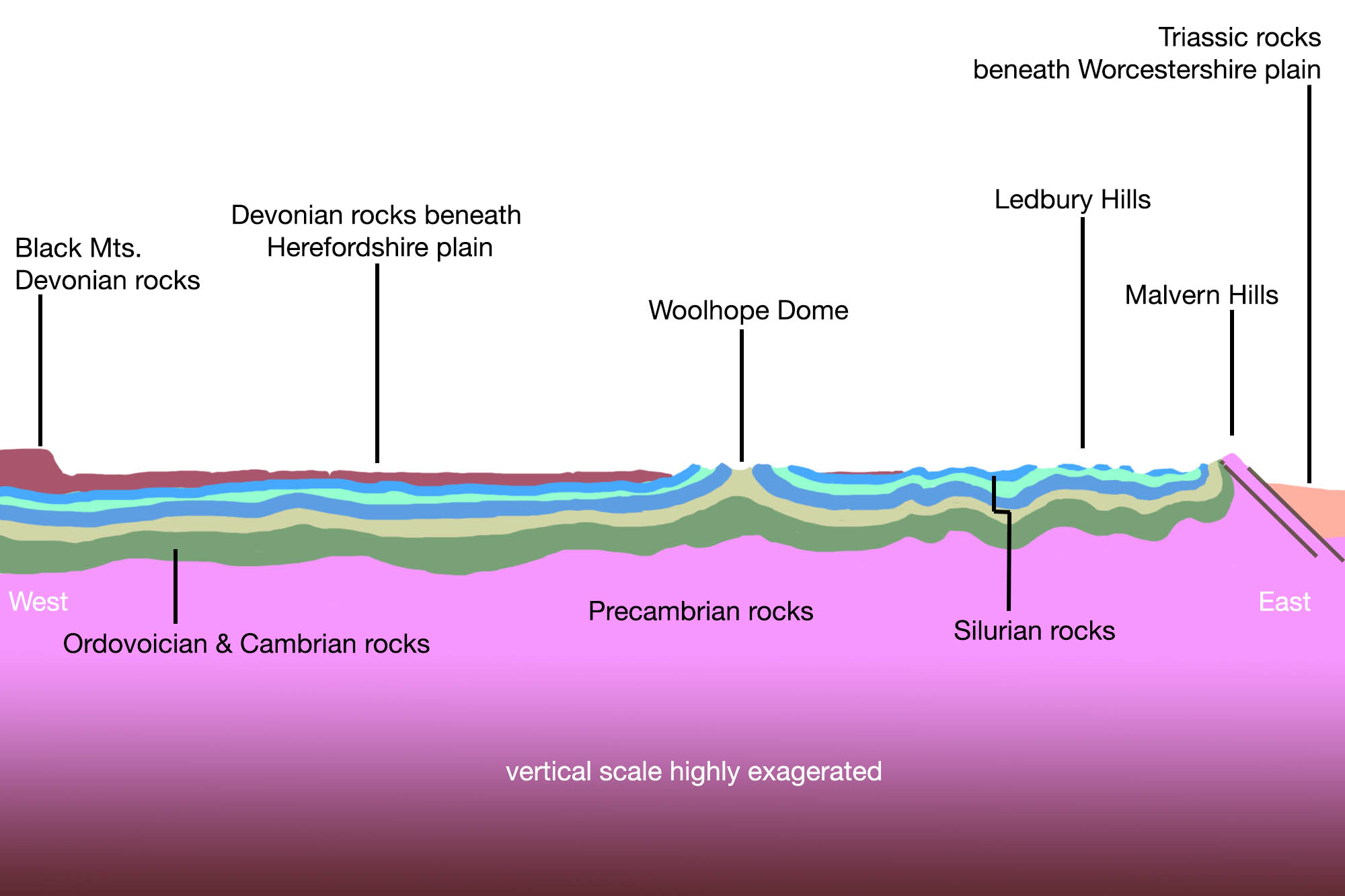 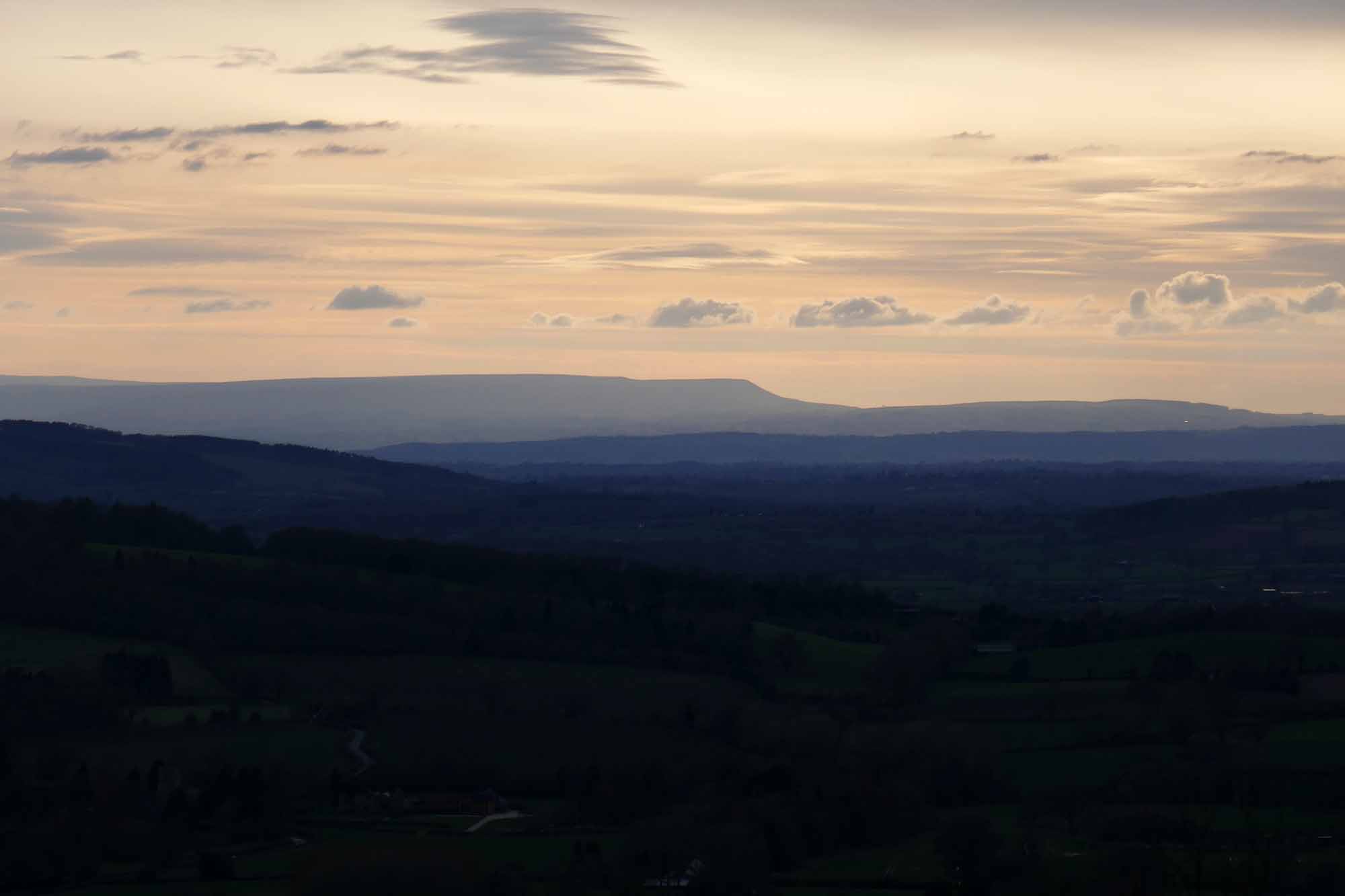 The Black Mountains in the far distance lie on the English/Welsh border. Hay Bluff is a prominent feature. To the left (south) of this the mountains have a flat top, reflecting the horizontal nature of the local sandstone strata. 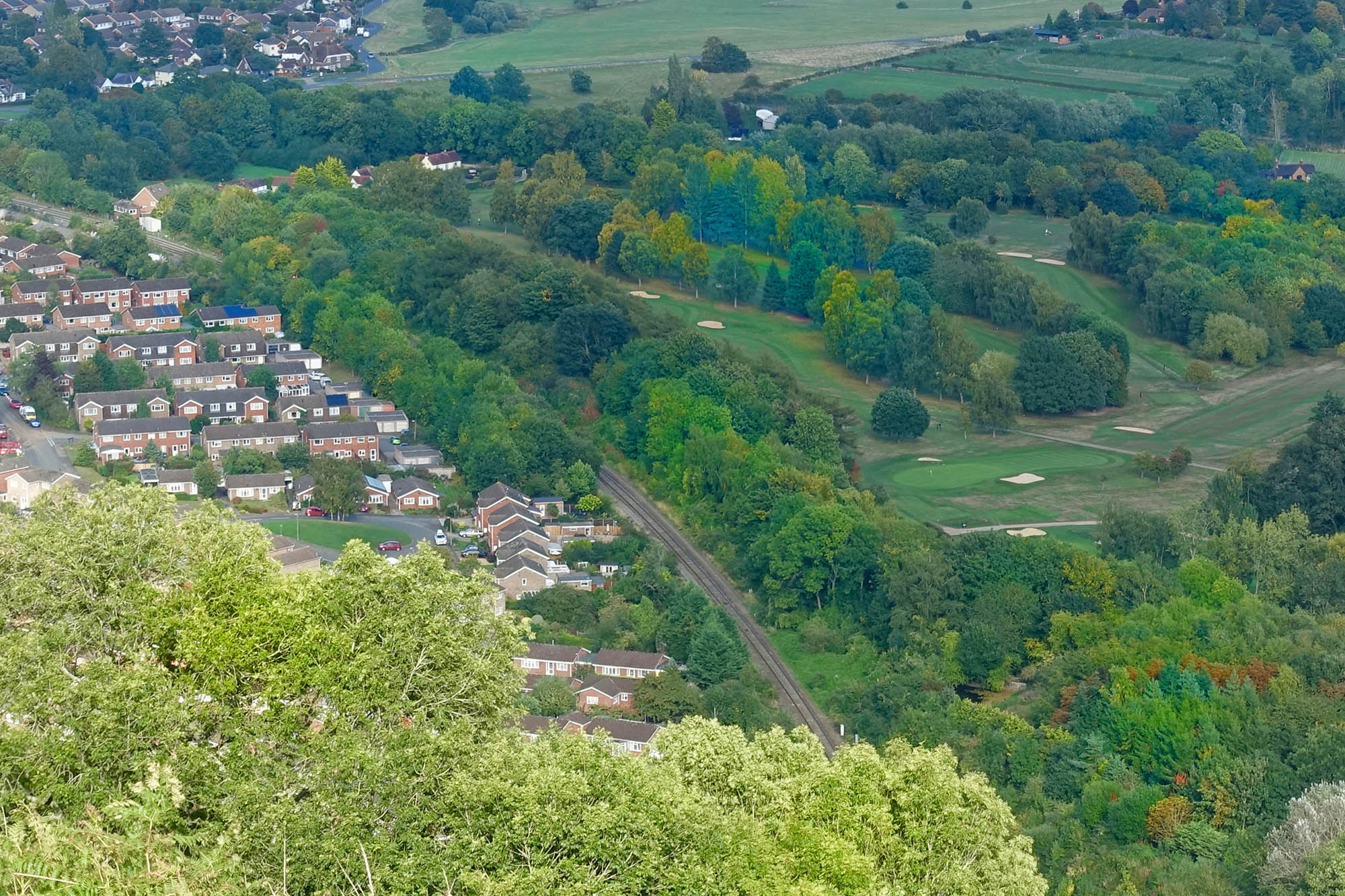 Although you can see only a single track on the railway below you, there are in fact two tunnels bored through the ridge. The first tunnel (Colwall Old Tunnel) dates from the time of the construction of the original railway in 1861. Local Colwall resident Stephen Ballard was the chief engineer. Eventually a second, bigger, tunnel (Colwall New Tunnel) was needed to accommodate new rolling stock and locomotives. This was completed in 1926.

The building of the Worcester-Hereford railway in the 1860’s involved digging a tunnel through very hard Precambrian rock using manual methods. Spring water caused additional problems during the construction. By the 1920’s it was clear that the first tunnel was too narrow, low and steep for modern traffic. So a new wider, less steep tunnel was constructed adjacent to the old one. The build was completed between 1924 and 1926, much faster than the first tunnel because of mechanised tunnelling methods. This tunnel remains in use today. The first tunnel was used in the second world war as an ammunition store. Today it is inhabited by a colony of bats. 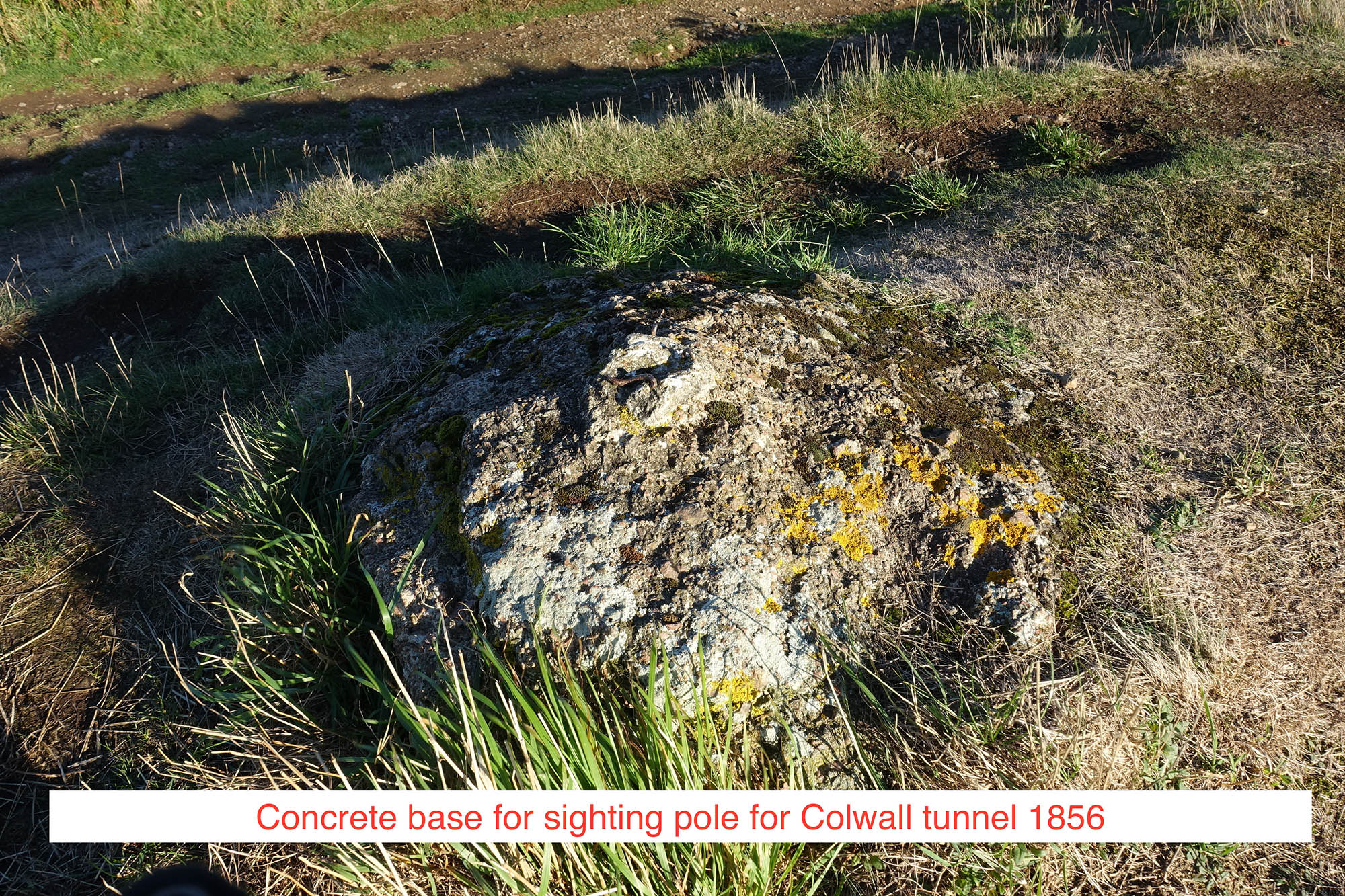 As you begin to ascend Perseverance Hill, look out for a large lump of concrete. It is difficult to spot, and at first glance looks like a natural rock, and it is also partly covered by long grass and lichens. It lies about 2 metres to the right (west) of the Shire Ditch. This is the remains of a 19th century surveying point for the building of the railway tunnel.

In 1856, as part of the initial surveying required for the first tunnel, a semi-permanent sighting pole was erected on the Malvern ridge so that the tunnel entrances at each end could be aligned. The pole appears to have consisted of a metal rod secured by concrete at its base. If you look carefully at the top of the concrete boulder, remains of some ironwork still exist. The tunnel took nearly 5 years to build. Limestones and shales were initially encountered on the Colwall side, and sandstones were the first rocks found on the Malvern side. However, very slow progress was made through the hard igneous rocks in the middle. The Victorians called this rock ‘syenite’, a type of granite within the Malverns Complex.

Looking out to the west, how would you describe the landscape of Herefordshire?

a) Mountainous
b) Flat
c) Hilly
d) A basin

What were the most difficult rocks encountered during the digging of the railway tunnels?