4 Martley Rock
Back to map 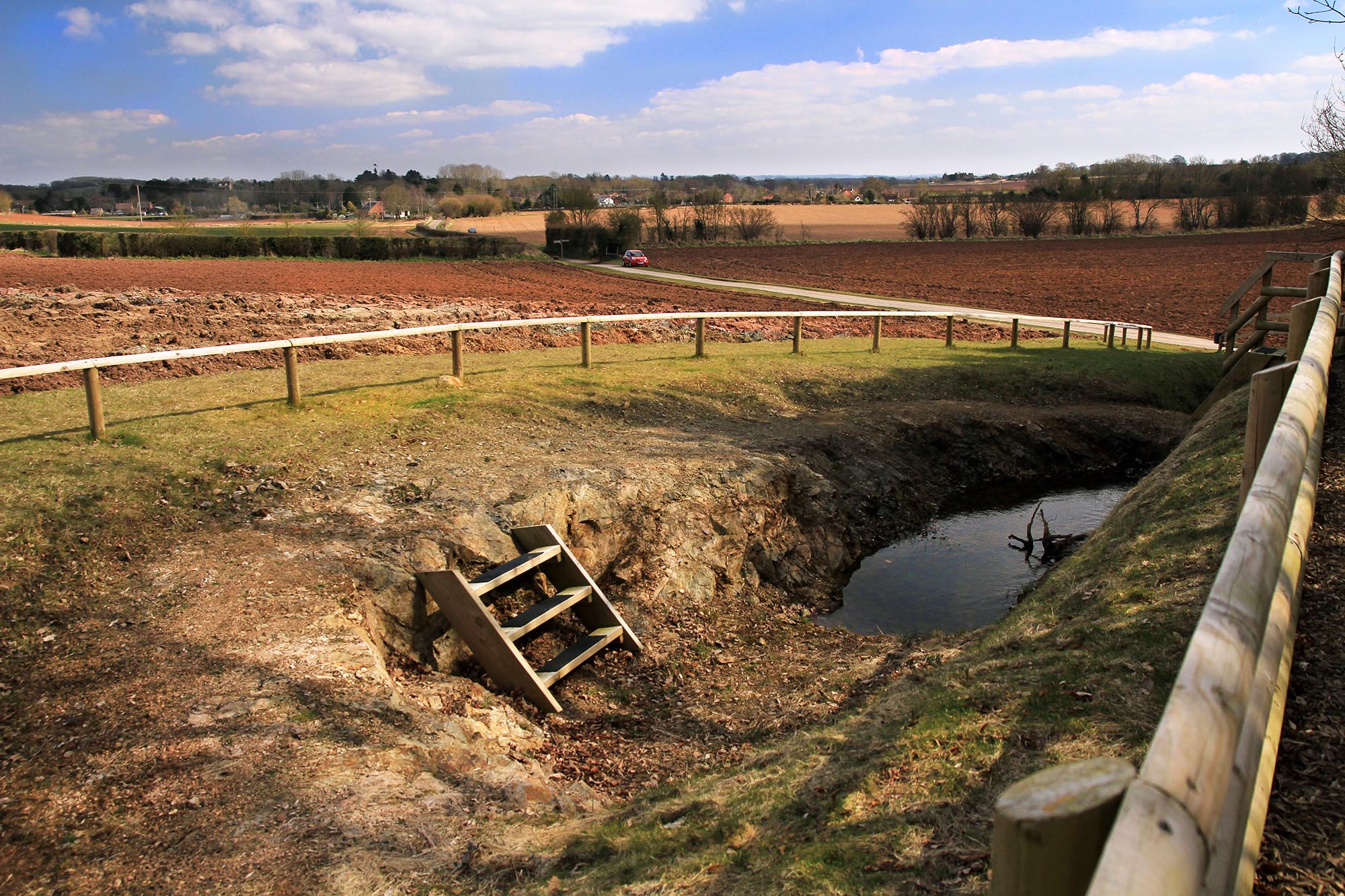 Martley Rock is special geologically as so many types of rock, spanning around 300 million years of Earth history, come to the surface here, in an area only a couple of hundred metres across. Find the place along the trench where the oldest rock is exposed.

This oldest rock is called Malverns Complex – it is a complex mix of many types of igneous rock. In 2011 Teme Valley Geological Society set about digging a series of trenches (see aerial photo below) in the field here to expose the rocks. The trench in front of you has been left open. Unfortunately the softer rocks weather quickly and become covered in vegetation, so you will need to use the images in the app and the information panels to understand what the freshly exposed rocks look like. There is also an app named ‘Martley Rocks‘ that you could download. This provides more information about the rocks here and at other places around Martley.

Note: The Marley Rocks app is currently unavailable for Android devices. It will be updated and published for Android in 2020 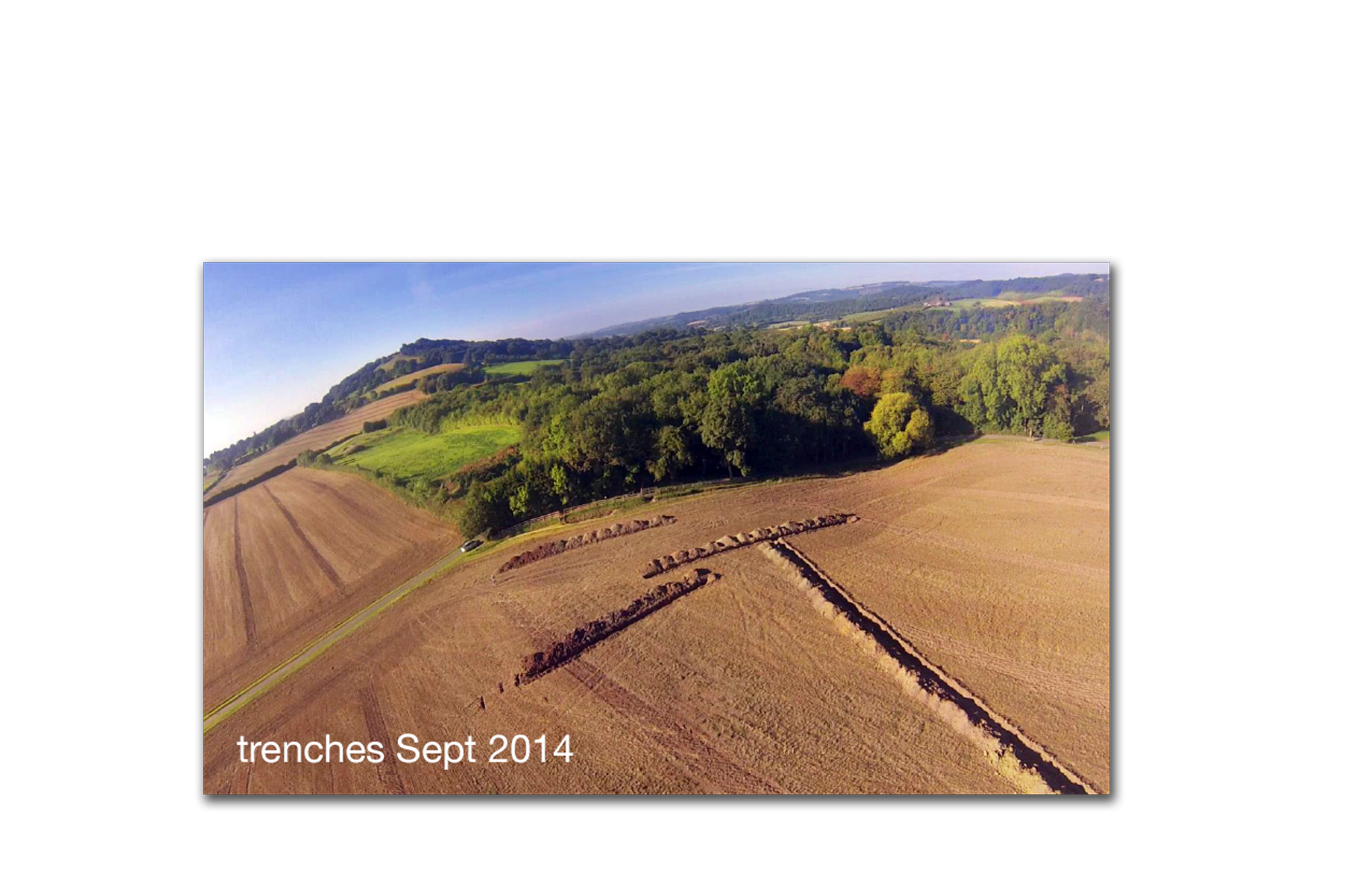 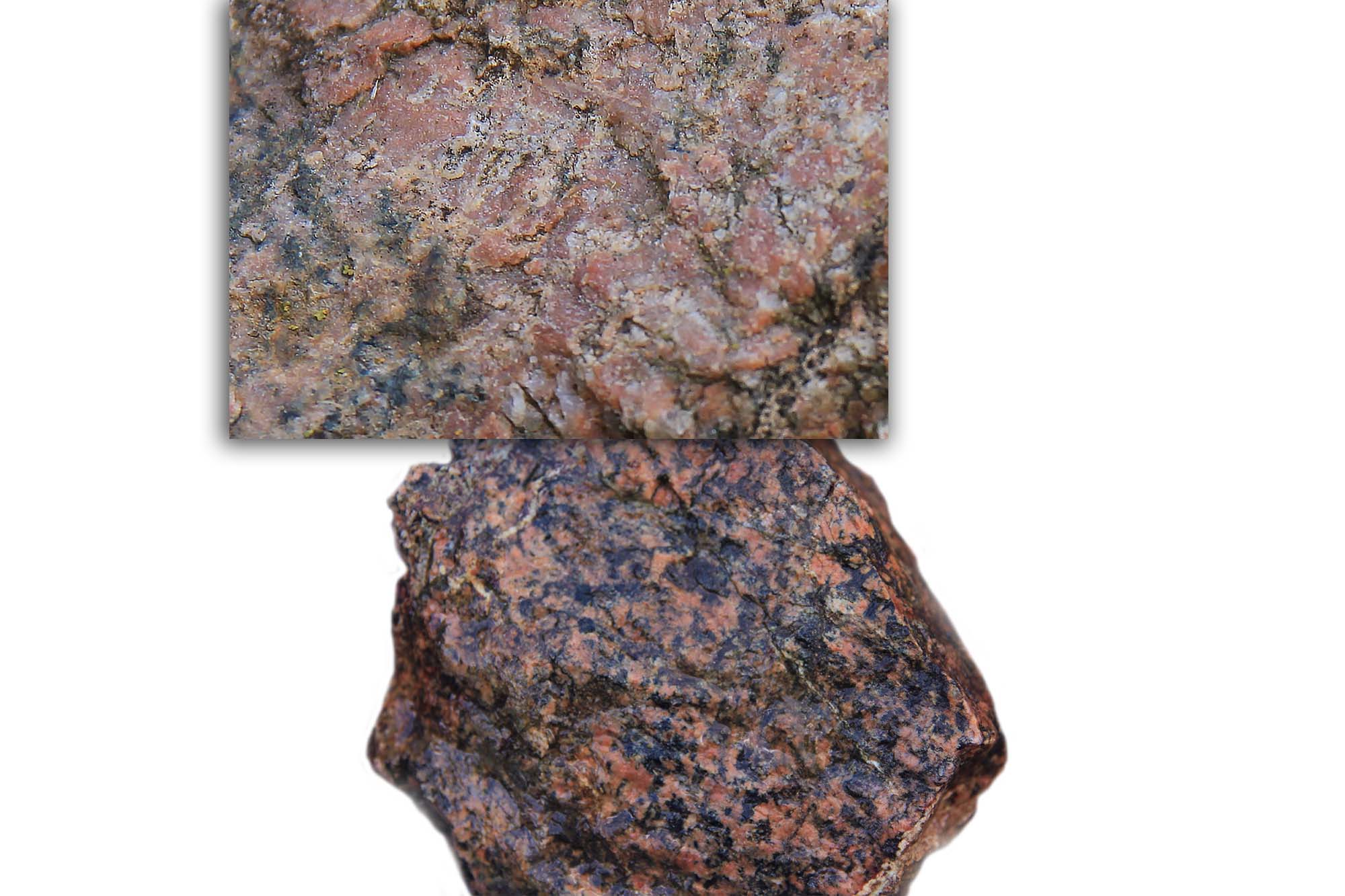 A typical example of the Malverns Complex rock. It is an igneous rock that has cooled slowly from molten rock deep underground. The slower a molten rock cools the bigger the crystals that are formed.This rock became solid around 680 million years ago. The pink colour is the mineral feldspar.

Geologists work out the age of a rock like this by making measurements on tiny traces of radioactive minerals, that very slowly change from one type to another over time at a known rate. So they act as a kind of clock which was set running when the rock became solid. 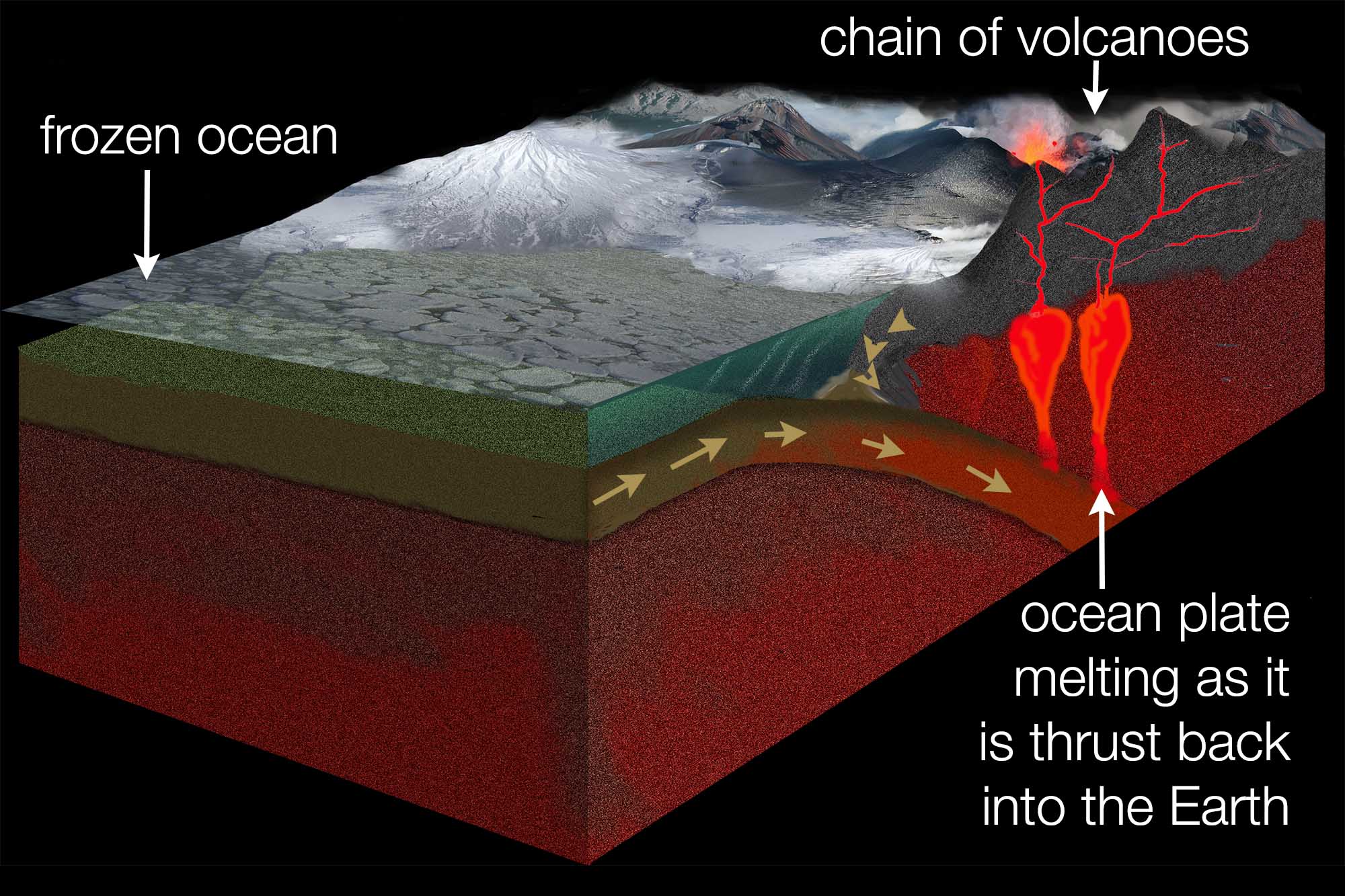 Around 680 million years ago, near the South Pole, a slab of ocean crust partially melted as it is was thrust beneath another plate. The molten rock slowly cooled and crystallised, to form the rock which today is at the surface and located about 52 degrees north of the Equator – as the Malvern Hills and the exposure here at Martley Rock.

As the plate moved deeper into the crust the rock it was made of melted. This molten rock moved upward in the crust to form chambers of magma, some of this magma made it to the surface as lava to the volcanoes above, the rest gradually cooled and crystallised to form rock like that found here and in the Malvern Hills. 680 million years ago this would have been a very hostile place, close to the south pole, no daylight for much of the winter, ice and snow everywhere, the ocean frozen and volcanoes prone to violent eruptions. The speed at which a plate moves is similar to the speed at which your finger nails grow. 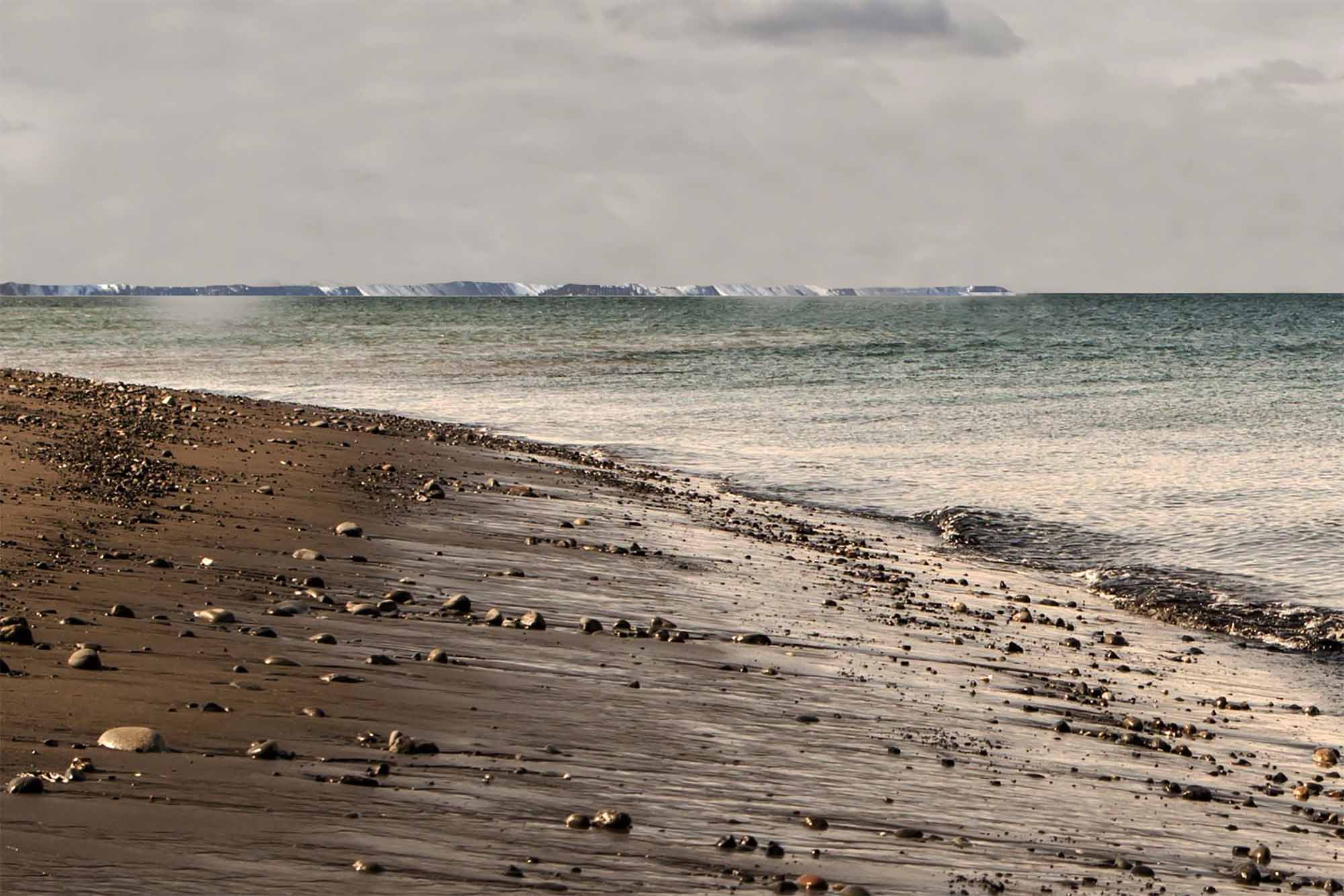 Beside the Cambrian sea

Find the rock called Martley Quartzite. Around 500 million years ago in the Cambrian time period, this place was likely to be a beach pounded by big waves of an ocean called Iapetus that no longer exists.

Beyond the shoreline the land was low lying bare rock. There were no plants, no trees, no birds, no insects, or any suggestion of animals at all. This was because as yet no life (plant or animal) had developed to live on the land. The evidence of fossils tells us there was much life in the sea, for example, early trilobites and brachipods. This would have be a cold place, as in the Cambrian this area of the crust was located around 60 degrees south of the equator. The plate (named Avalonia) carrying ‘Martley’ was slowly (few centimetres a year) moving northwards towards the equator, so warmer times lay in the future. 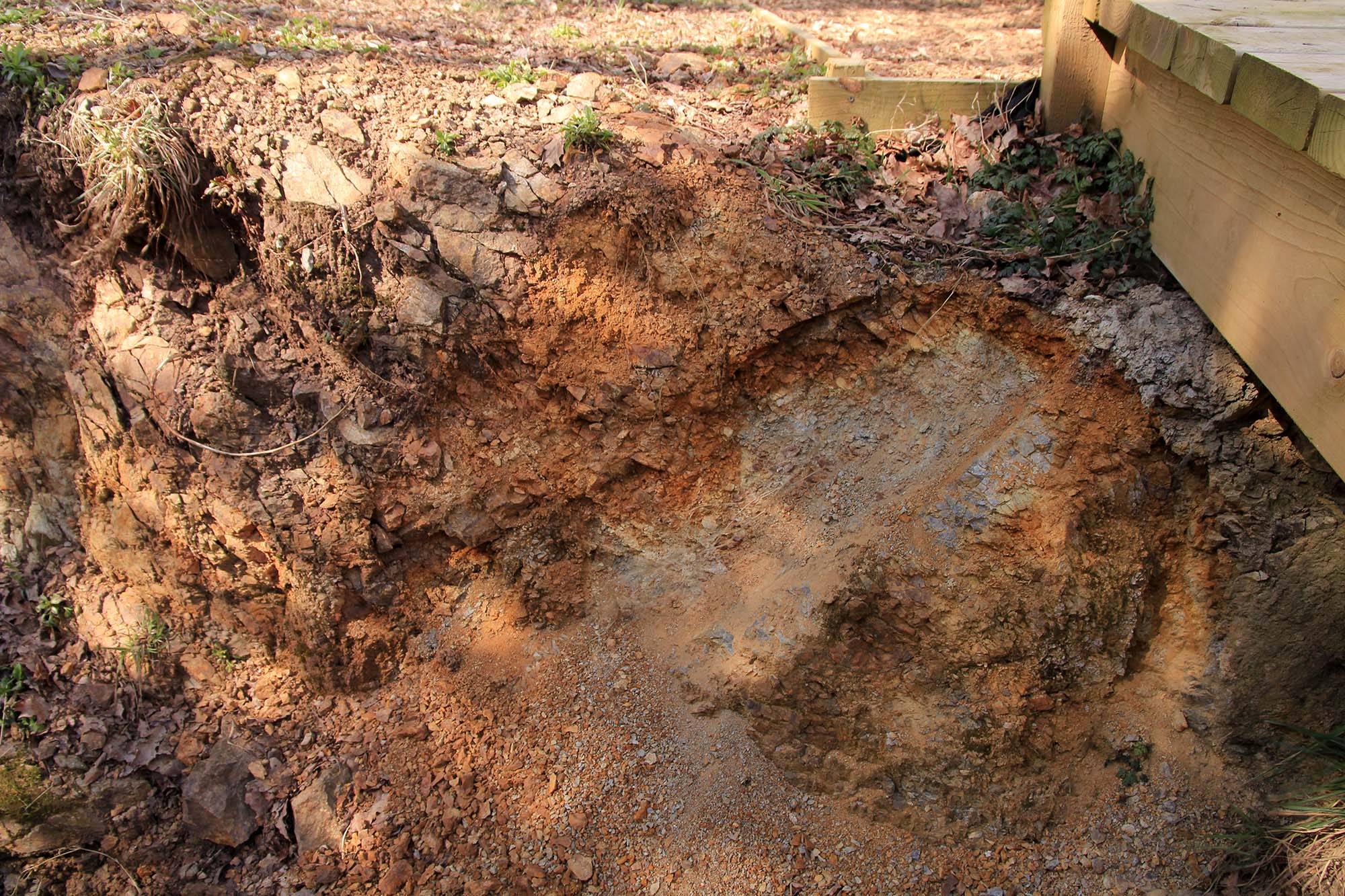 This is the beach? Well it is made of almost pure quartz (sand) with well-rounded grains typical of beach deposits. The quartzite here has been crushed by forces within the Earth when it was buried beneath younger rocks. It was also stained bright orange/yellow by iron minerals.

In other places the same quartzite contains pebbles as you would find on a beach today. The exact age of the Martley Quartzite is uncertain so it is often labelled as belonging to the Cambrian or Ordovician, which ever. That still makes it at least 440 million years old. The Martley Quartzite has also been thrust over the top of younger (Carboniferous) rocks by mountain building forces which we will meet again later. Sorting the order that events have happened in deep time is a complex process! 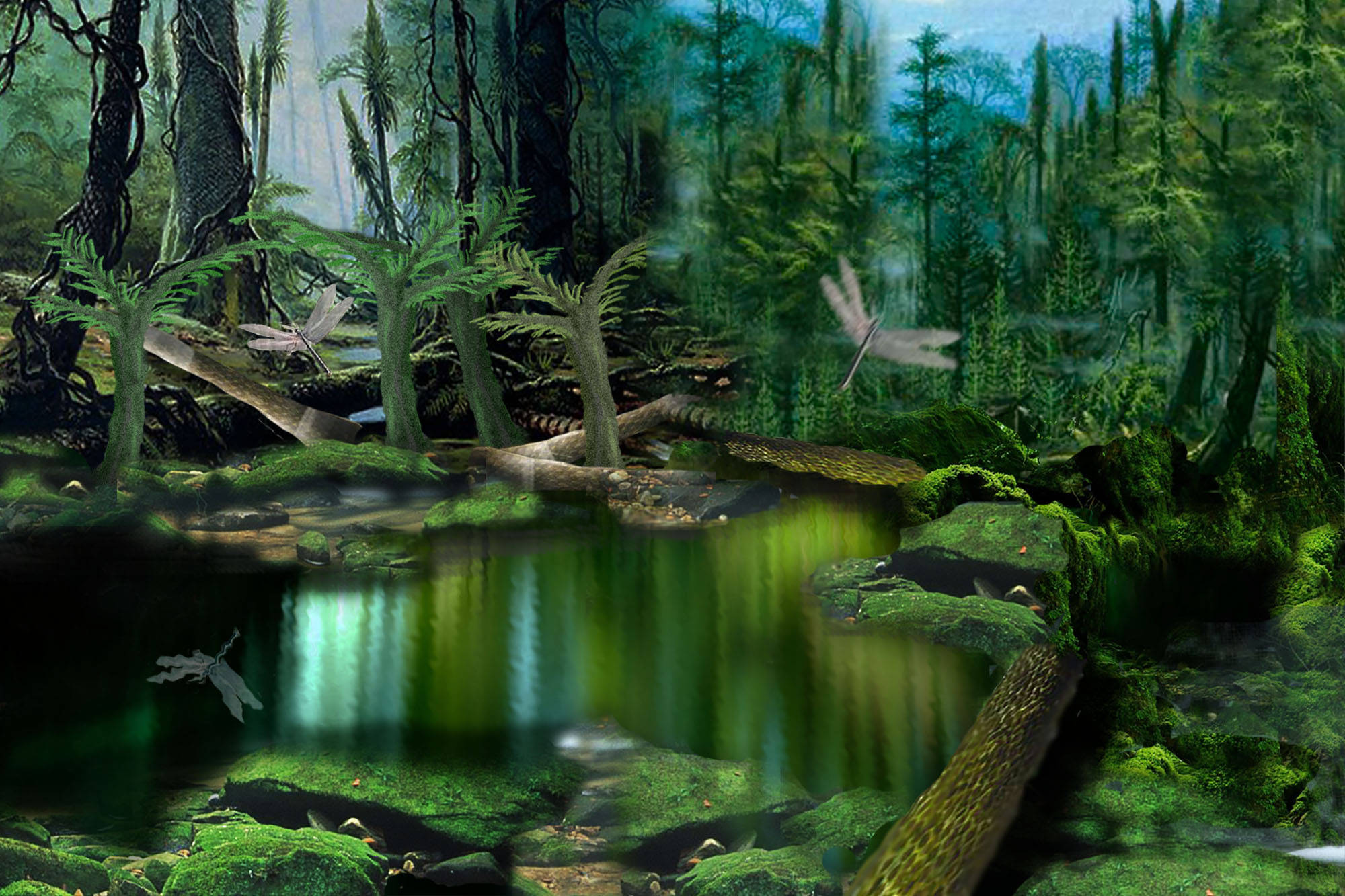 Find the place along the trench where Carboniferous age rocks come to the surface. In the Carboniferous period around 300 million years ago, the Martley area was close to the equator and was a hot humid place covered in great forests with very large insects, e.g. dragon flies with a wingspan of 1.5 metres! The trees looked more like giant ferns and plants had no flowers back then.

In the Carboniferous the Earth’s atmosphere had more oxygen than it does today. That higher level of oxygen may have enabled insects to grow much larger. The extra oxygen made fire a major risk. Even the wet forest could probably burst into flames as a result of a lightning strike. We would not be able to run cars or switch electrical things on, in an atmosphere like that, without creating massive fires. 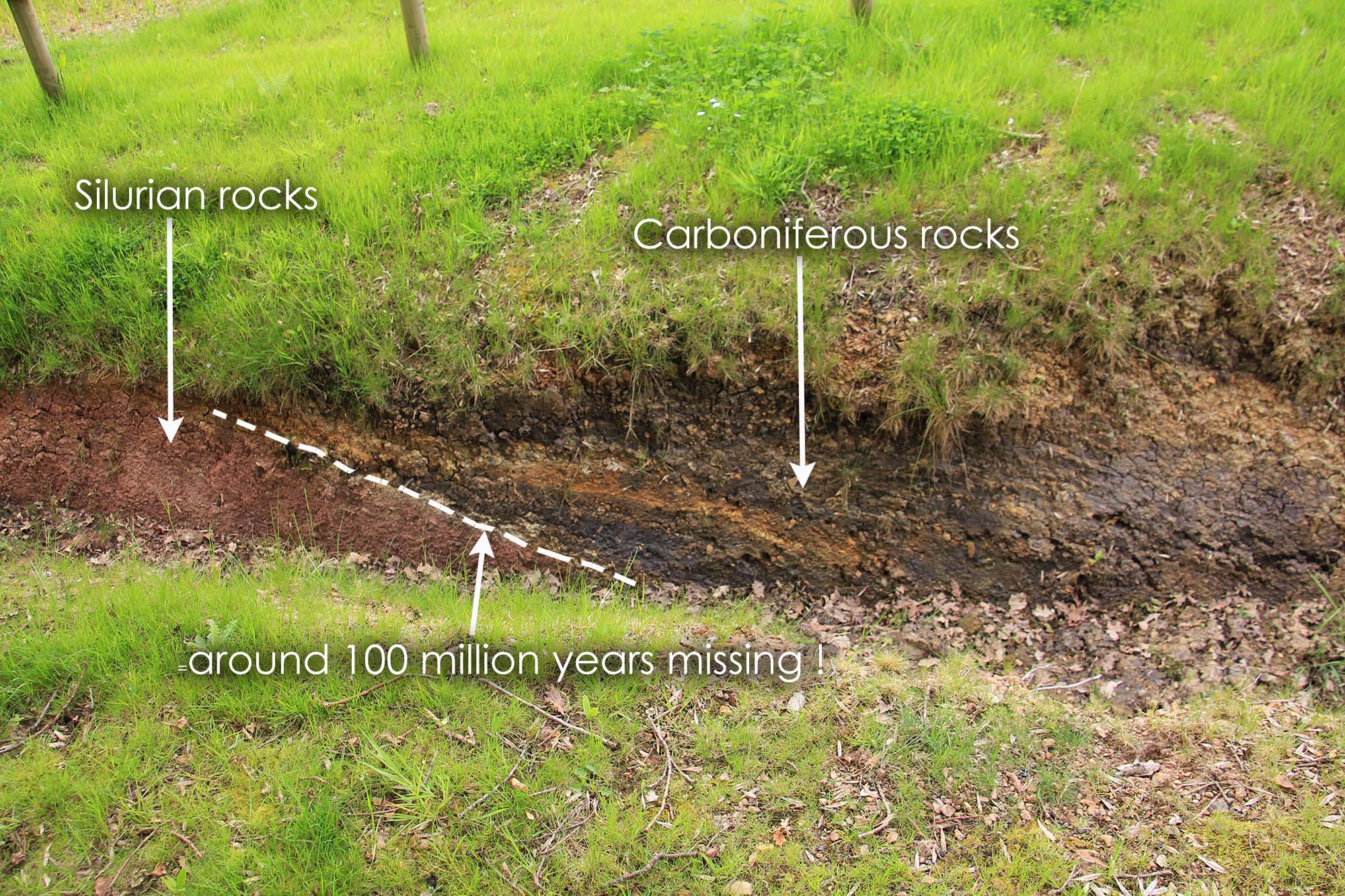 Find the place along the trench where Carboniferous rocks meet Silurian rocks. The black and orange clays and sandstones formed in the Carboniferous. Beneath them is a red mud, this is a rock that is from Silurian time. This leaves a gap of around 100 million years with nothing to show

This missing period of time is mainly the Devonian time period. There are no Devonian rocks here, either because some were deposited but then got eroded away, or none were deposited anyway. The line along which the Carboniferous rocks touch the older Silurian rocks is an erosion surface and geologists call this an unconformity. 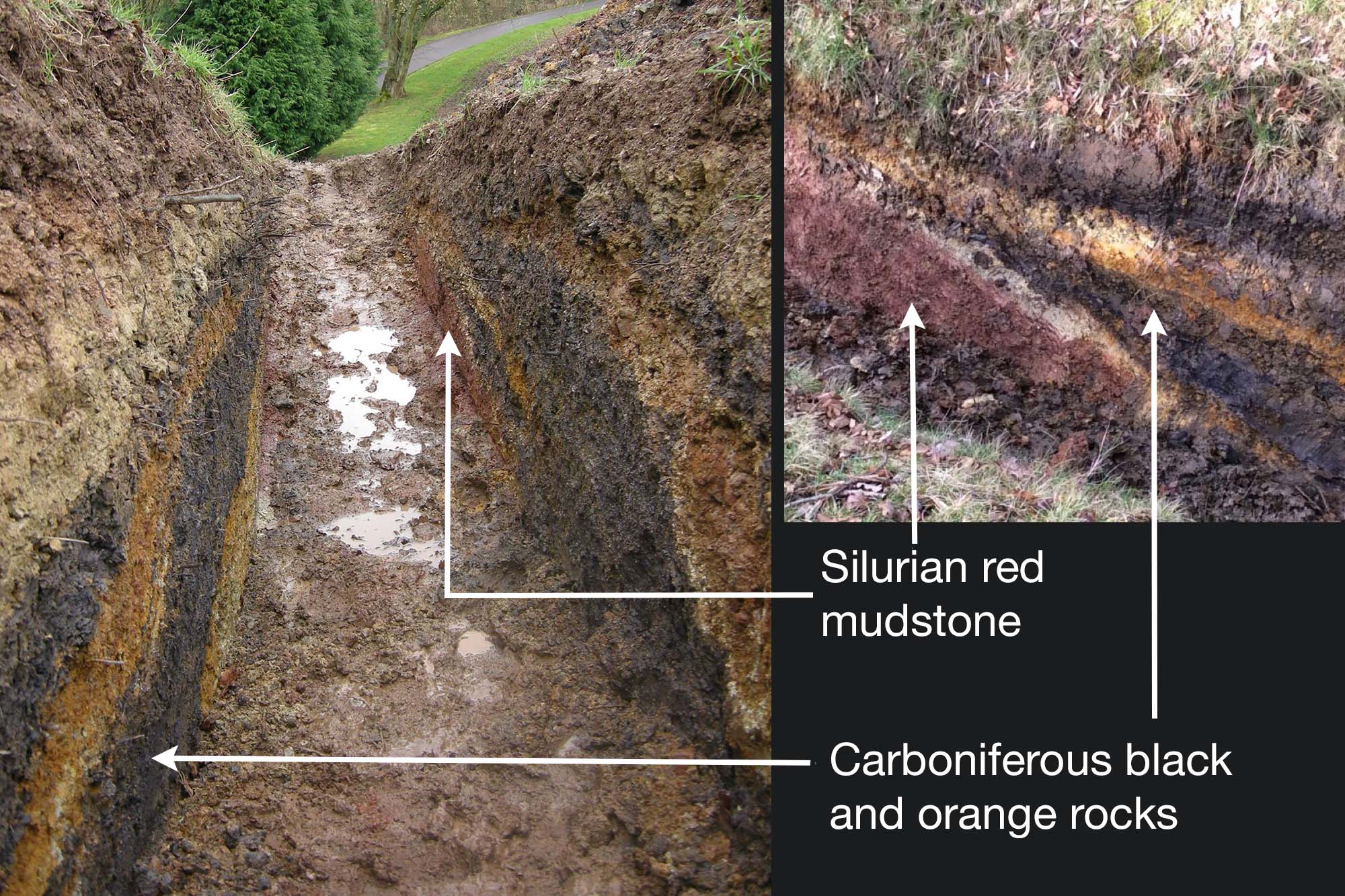 Black in sedimentary rocks usually indicates the presence of carbon, often in the form of coal. The carbon of coal is what is left of the masses of plants after they have decayed and been squeezed into the graphite form of carbon. The red and orange stains are from various iron minerals, that were also formed from the decaying plant material.

Rocks that have formed from cooled magma (molten rock from deep in the Earth) are called:

a) metamorphic
b) sedimentary
c) igneous

Which of the following minerals might give the Malvern Complex rock its pink colour?

Igneous rocks can have very large crystals because:

What do you think is the largest feldspar crystal found so far?

Which mineral is found in Martley Quartzite?

Look at the ancient landscape when the Martley Quartzite was laid down. Where do you think the quartz came from?

At this site are some rocks from the Carboniferous period when many trees and ferns developed. The animals grew very big at this time because the atmosphere contained so much:

As the plants died, layers and layers of them were buried. Eventually they formed which of these useful resources that we use today?