3 Berrow Hill view
Back to map 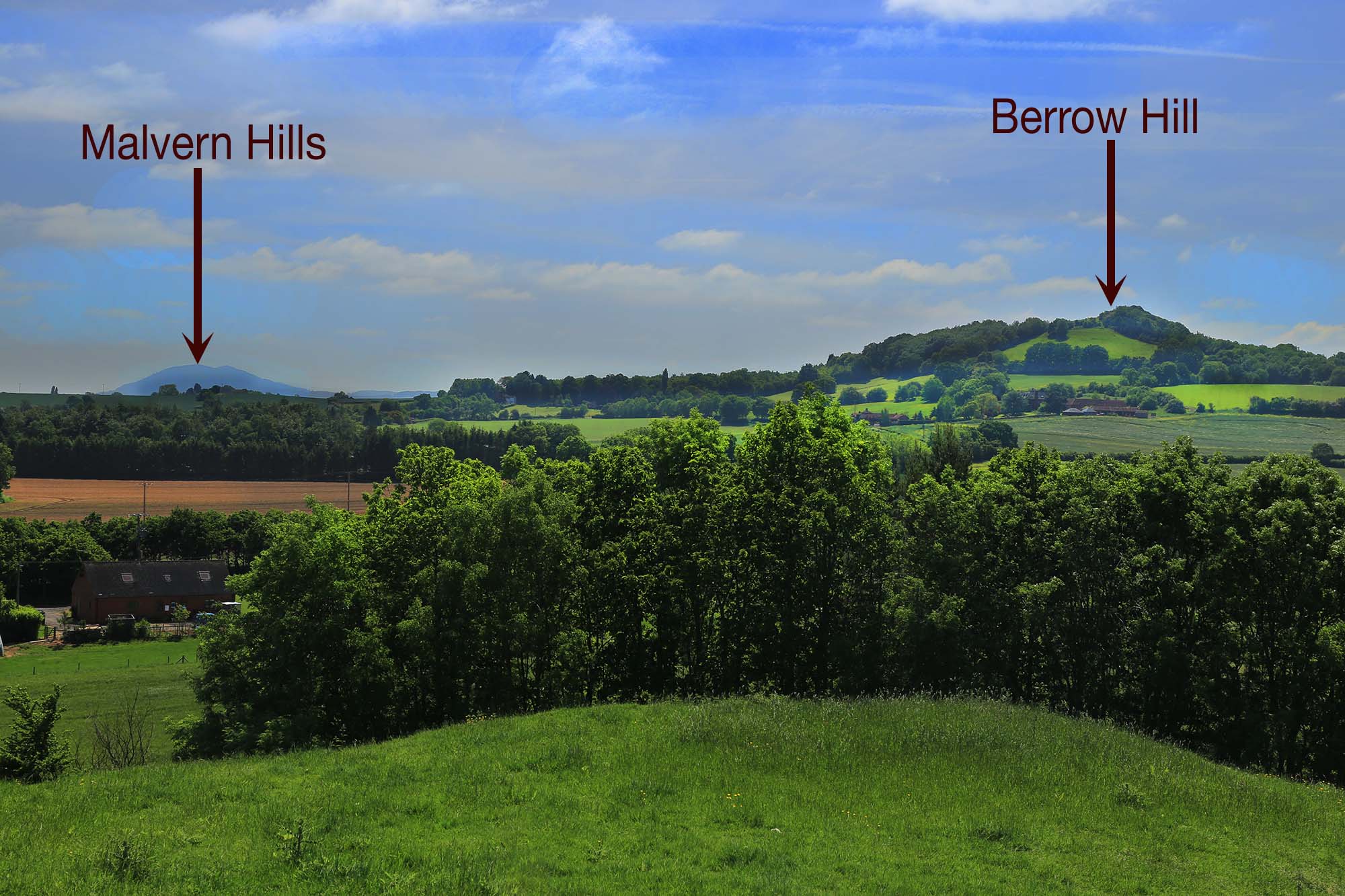 From this point you have a view of Berrow Hill. The upper part of Berrow Hill is covered with a rock called a ‘breccia‘. This breccia was formed in a desert around 280 million years ago during the Permian time.

he breccia was deposited in the time period before the Triassic, called the Permian, so we call it Permian Breccia. The Permian for this part of the Earth’s crust was a time of vast harsh deserts. Look at how the continents were arranged and the location of this area, to see why a desert was here around 280 million years ago. Not that all the Earth was experiencing desert conditions. To the south of the equator an ice age, called the Karoo, was taking place.\n\nYou might just be able to touch on the map, the tiny bit of green colour under where it says Berrow Hill, to brig up ‘then’ for this Permian time. If not use the clock and move the timeline to display around 280 million years ago. You will also come across this Permian Breccia named as Clent Breccia (it occurs in the Clent Hills) and Haffied Breccia (named after a place to the south of the Malvern Hills). 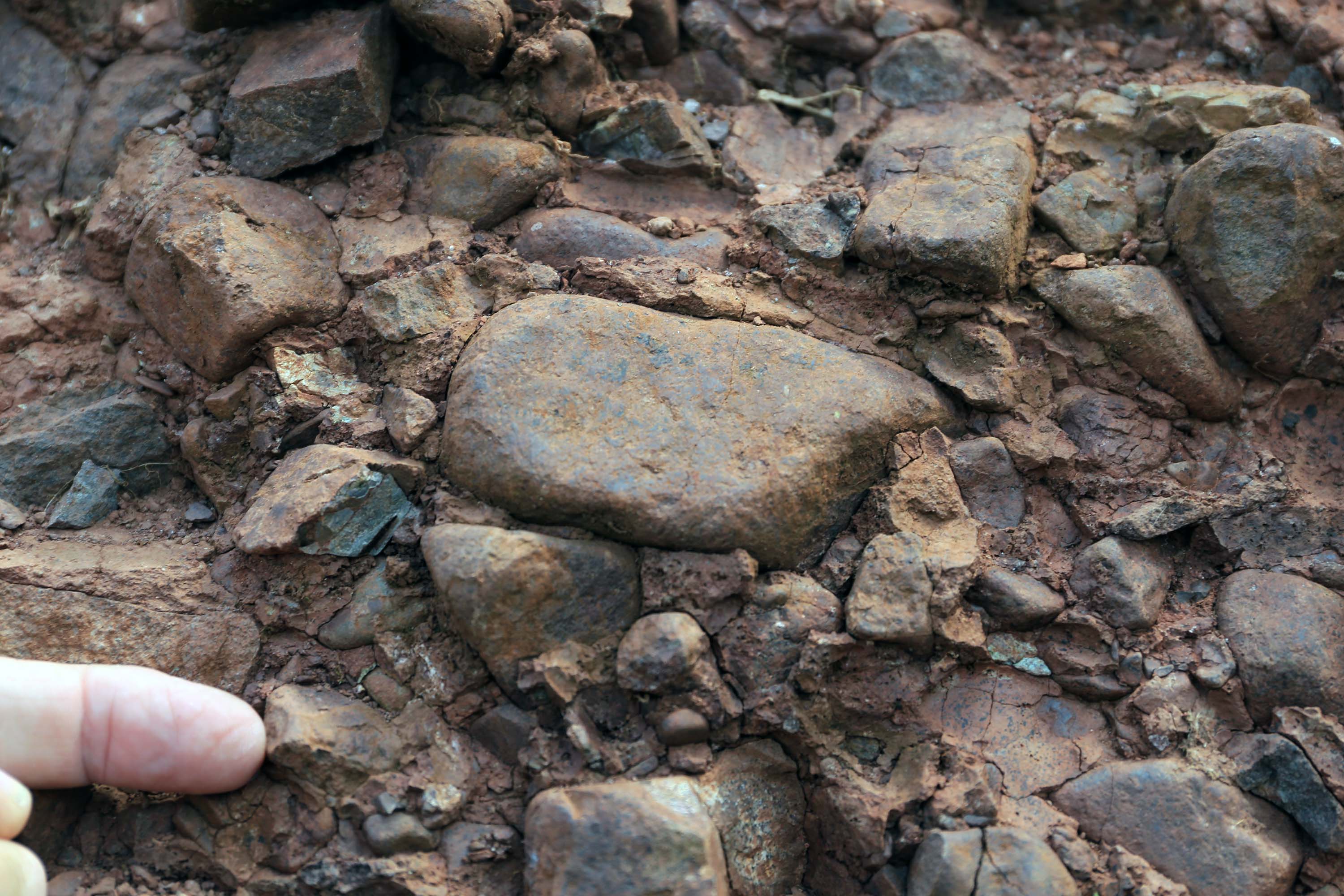 A complete jumble of angular shaped pieces of rock, weakly cemented together by fine sediment. The red colour is iron oxide staining.

Many of these rocks here are made of the same type of rock as the Malvern Hills, which indicates the ‘Permian Malverns’ was being eroded away in this Permian desert. Other rock types found here match up with rocks to be found in hills of Shropshire, indicating the type of distance this material can be carried by desert floods. A similar breccia occurs on the Clent Hills to the SW of Birmingham and also around the south of the Malvern Hills, where it is called the Haffield Breccia. All these patches of Breccia are areas, not yet eroded away, of what was once a probably a great continuous boulder plain (called a ‘bahada’ or ‘bajada’) that stretched for hundreds of kilometres over the Permian desert floor. 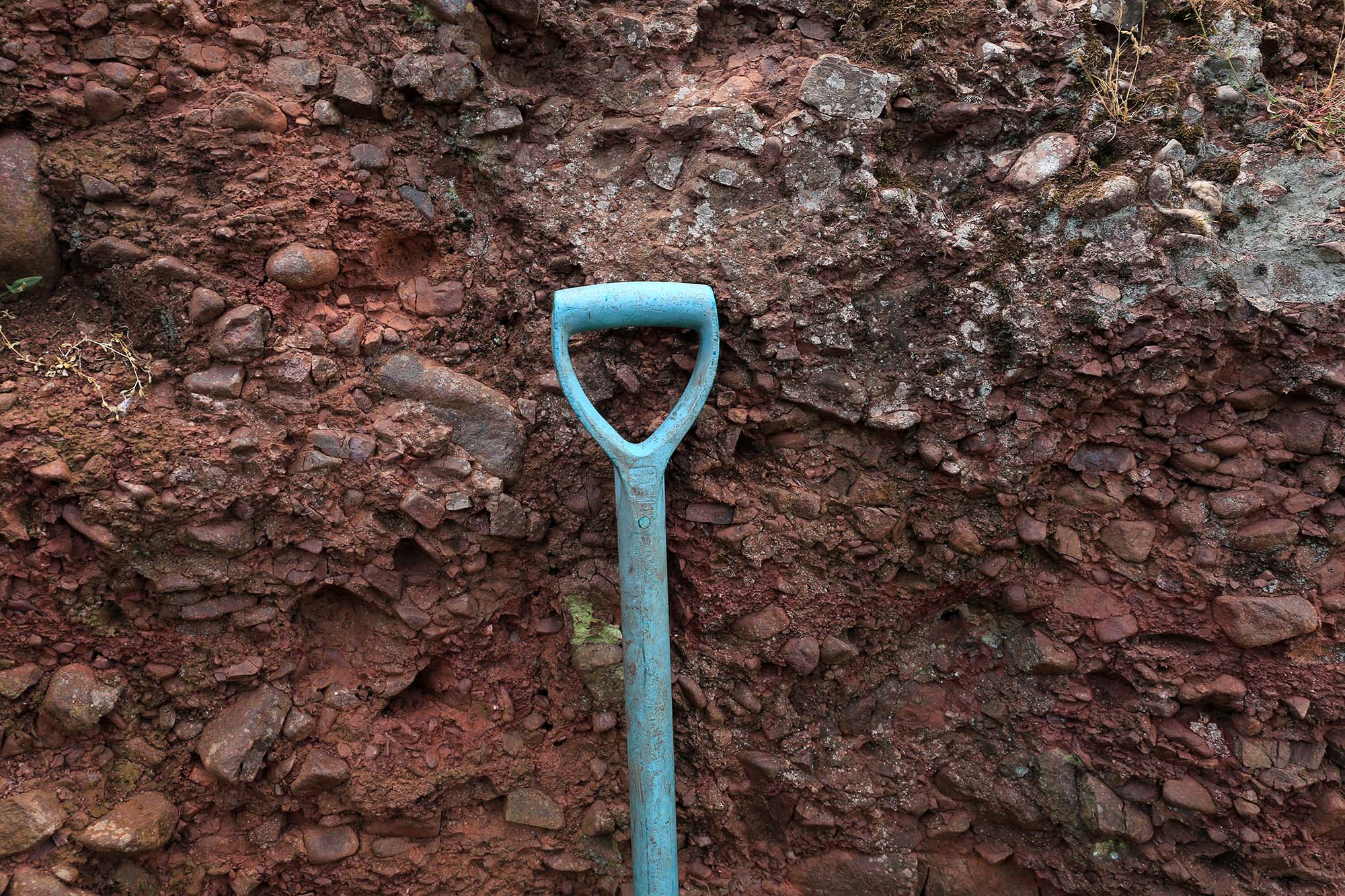 The jumble of the Permian Breccia

Another view of the Permian Breccia on the upper part of Berrow Hill. We call this a poorly sorted sediment, which together with the size of the stones, indicates transport by fast flowing water.

The fast flowing water would be a flash flood in the Permian desert. Flash floods are common in deserts today. They occur when a heavy storm rapidly transforms dried up channels into raging water flows able to transport large boulders. You would not want to be in the path of one of these flash floods and they happen very rapidly! 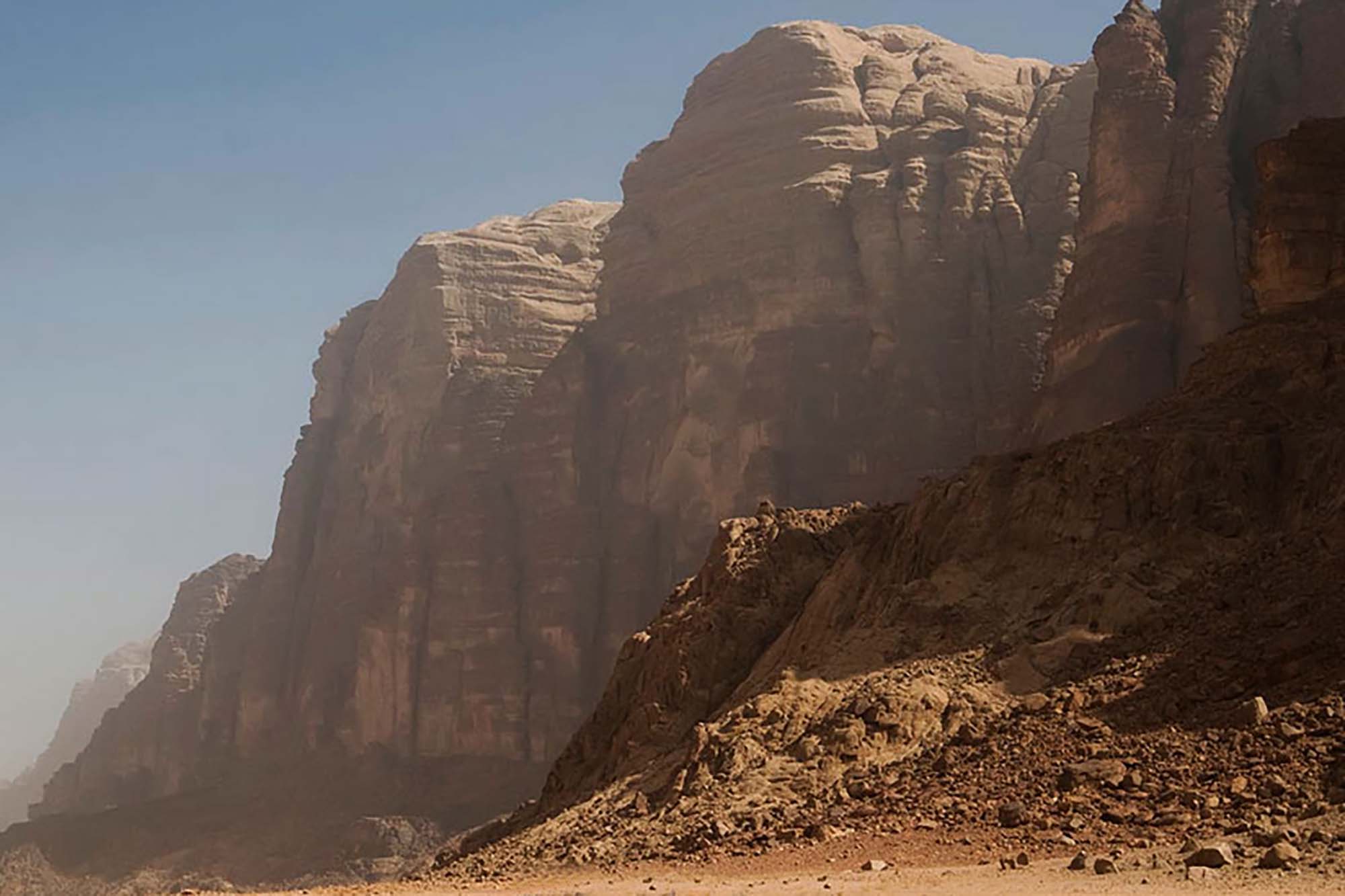 Breccia forming in a desert

The pile of rocks forming at the base of these eroding cliffs, is a future breccia. Flash flooding will wash out this debris to form ‘fans’ of boulders and finer sediment over the gently sloping desert plain – the ‘bahada’ or ‘bajada’. 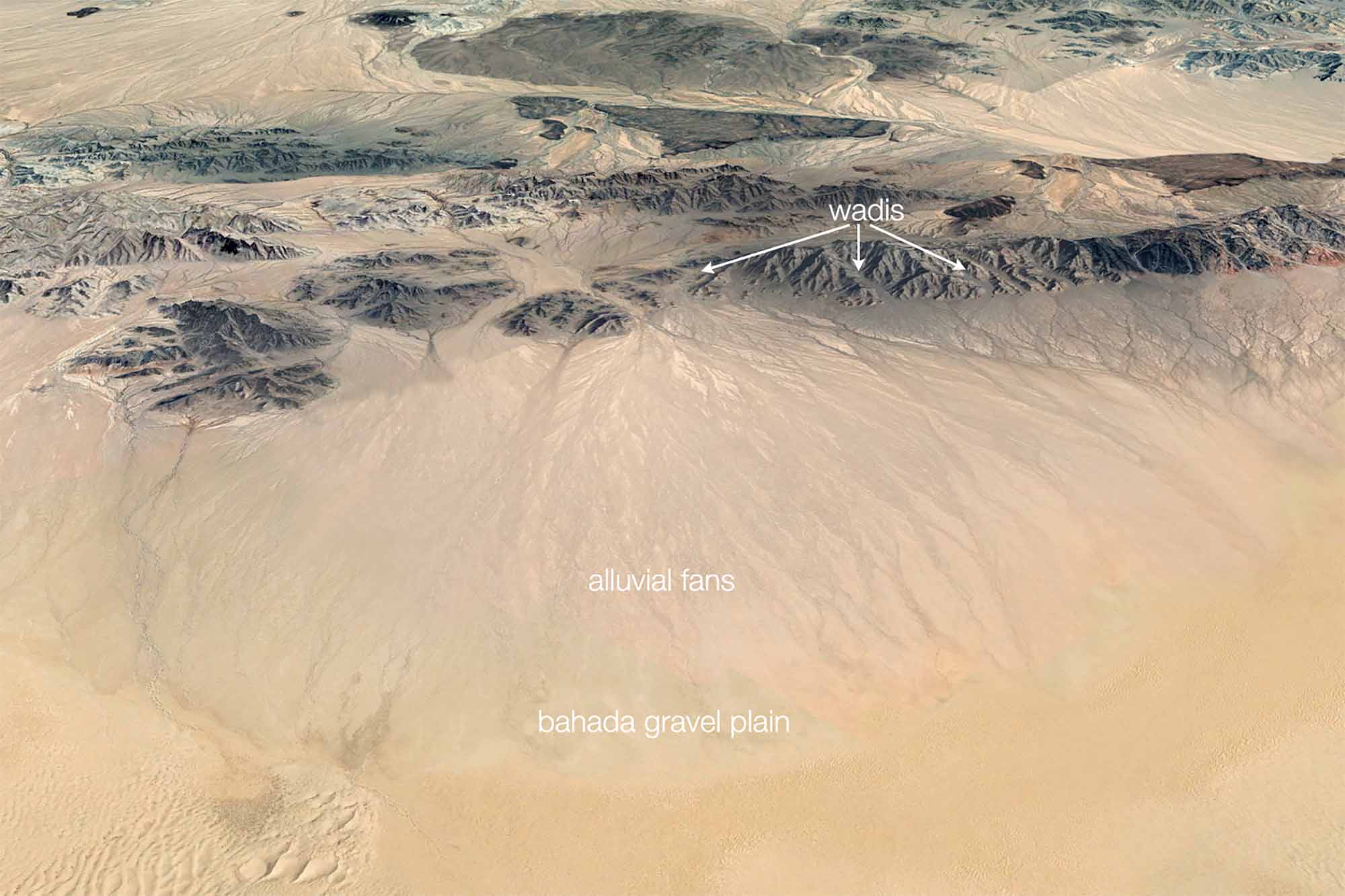 Martley around 290 million years ago

This is how the Martley area may have looked in the Permian around 290 million years ago. Fans of gravel and larger pieces of rock spread out over the wind swept desert plain. Note the narrow wadi valleys in the high ground. The wadi fill with torrents of water when occasional heavy storms occur in the desert.

The hills in the image could have been formed of rocks similar to those forming the Malvern Hills, or other hard rocks out to the west – so long as they were rocks older than the Permian. Do not make the mistake of trying to see the features shown in this Permian reconstruction as the features that form our present landscape. The landscape of today is the product of erosion in geologically very recent times – mainly the last couple of million years! The landscape of the Permian would have been subjected to the erosion of tens of millions of years during the Triassic. Only to be buried beneath the sea and sedimentary rocks formed in the Jurassic and Creataceous, which were then eroded away through the Palaeogene and Neogene – see timeline under the clock (in the app). 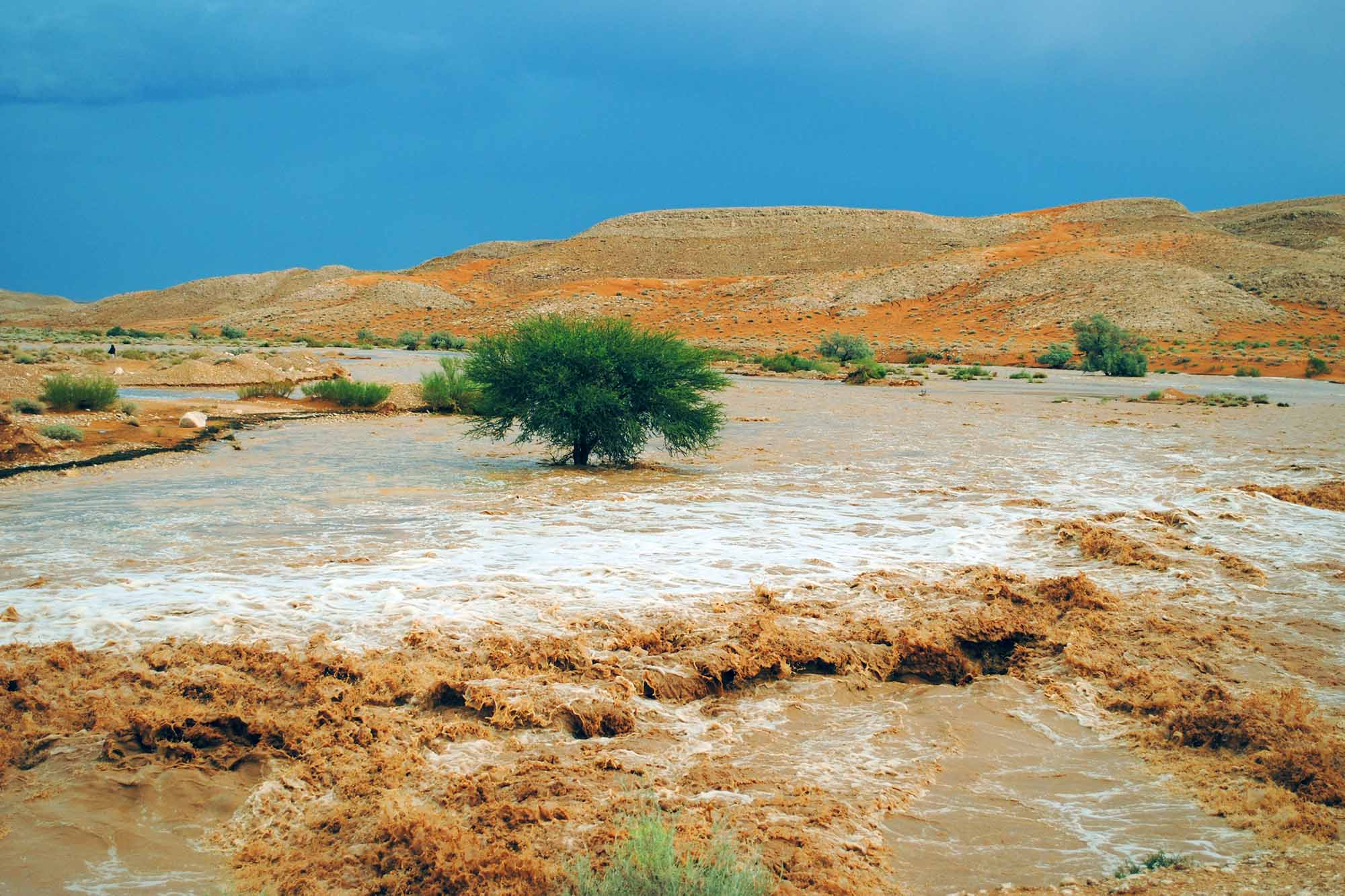 Flash flood in a desert

Picture of a flash flood in a present day desert. Flash floods can be very sudden and very dangerous given the volume of water and all the rock debris being carried forward by the force of the water.

The flash floods of the Permian desert would probably have been seasonal (late summer to autumn). Triggered by very moist air from the hot waters of the Tethys Ocean to the SE, cooling as it was forced over high ground. In September to October the surface sea temperatures in the western Tethys (closest sea to this area) could have reached 32’C or more.

At Berrow Hill, around how many millions of years have you gone back in time?

In what part of the Permian landscape do you think the rocks at Berrow Hill were formed?

Task Site 2b
Back to map
Task Site 4