2b Nubbins
Back to map 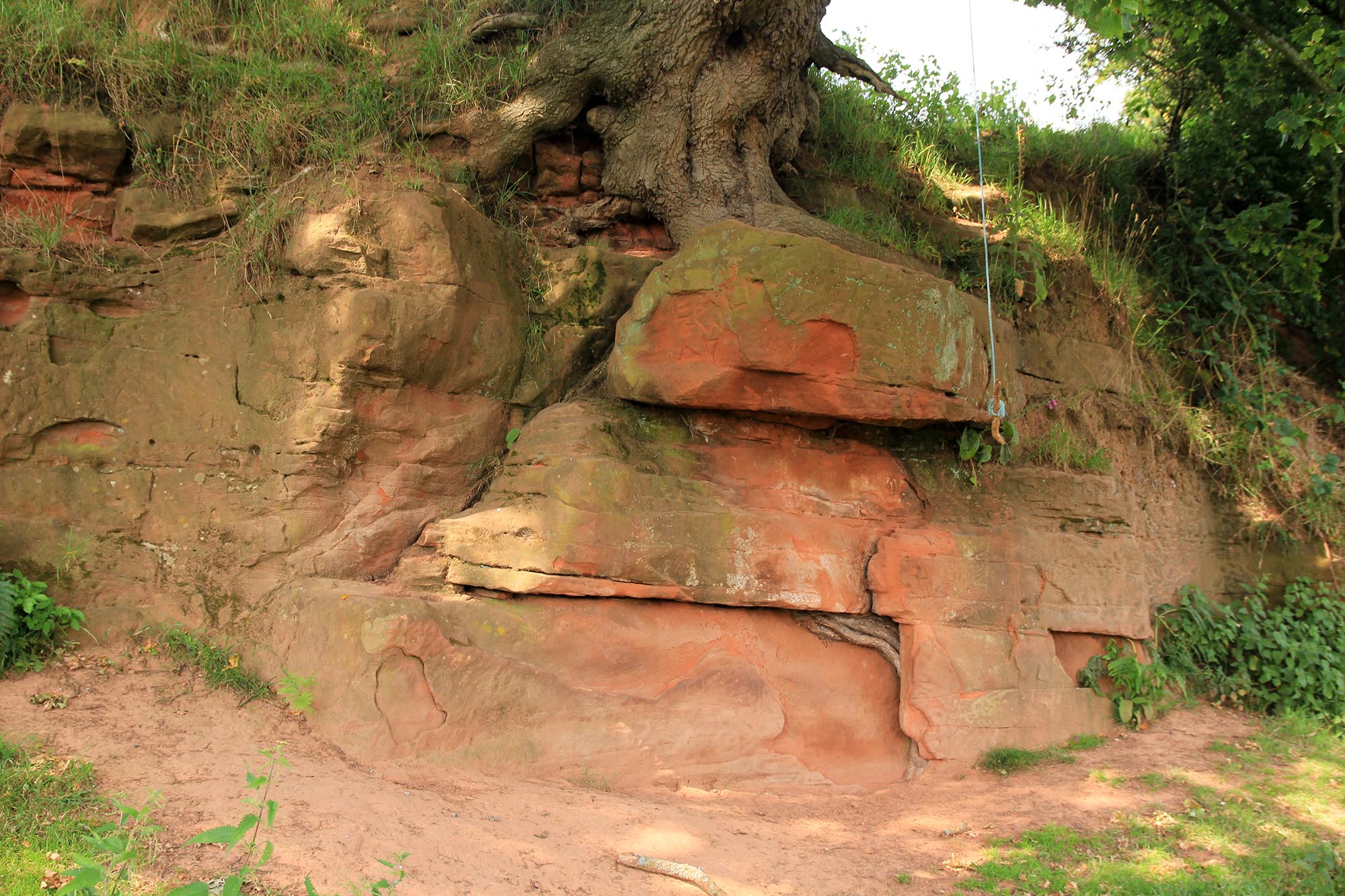 Thick beds of soft red sandstone, but not all this sand was deposited by the wind – there were rivers here as well.

The area was criss-crossed by a network of river channels. At times these may have dried up, but on other occasions they would have been full of water, flowing with enough force to carry along quite large pebbles. 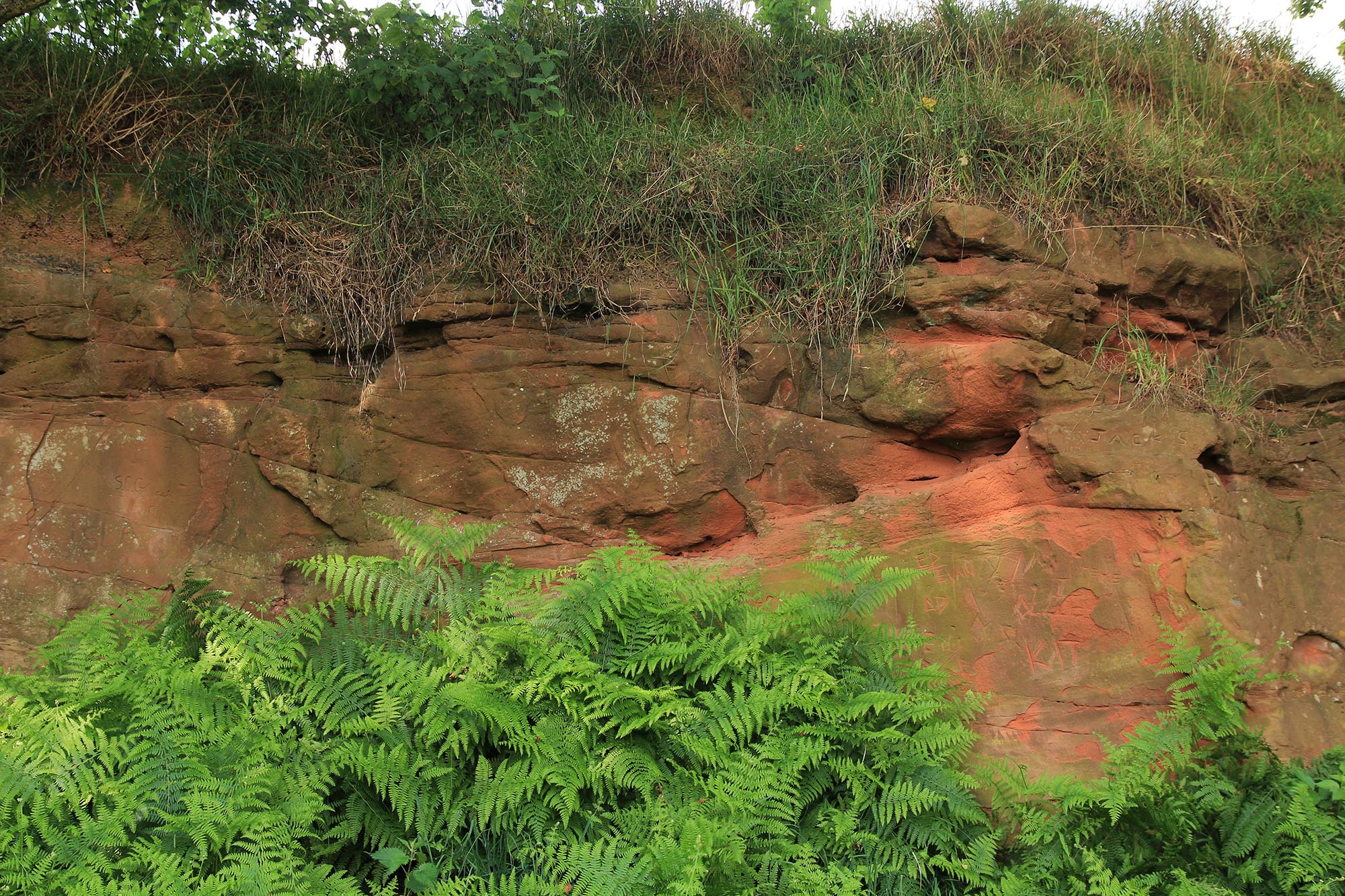 Cross-bedding forms when sediment is being moved by wind or water currents. When cross-bedding is formed by water it is often called ‘current-bedding’ when formed by wind it is known as ‘dune bedding’. 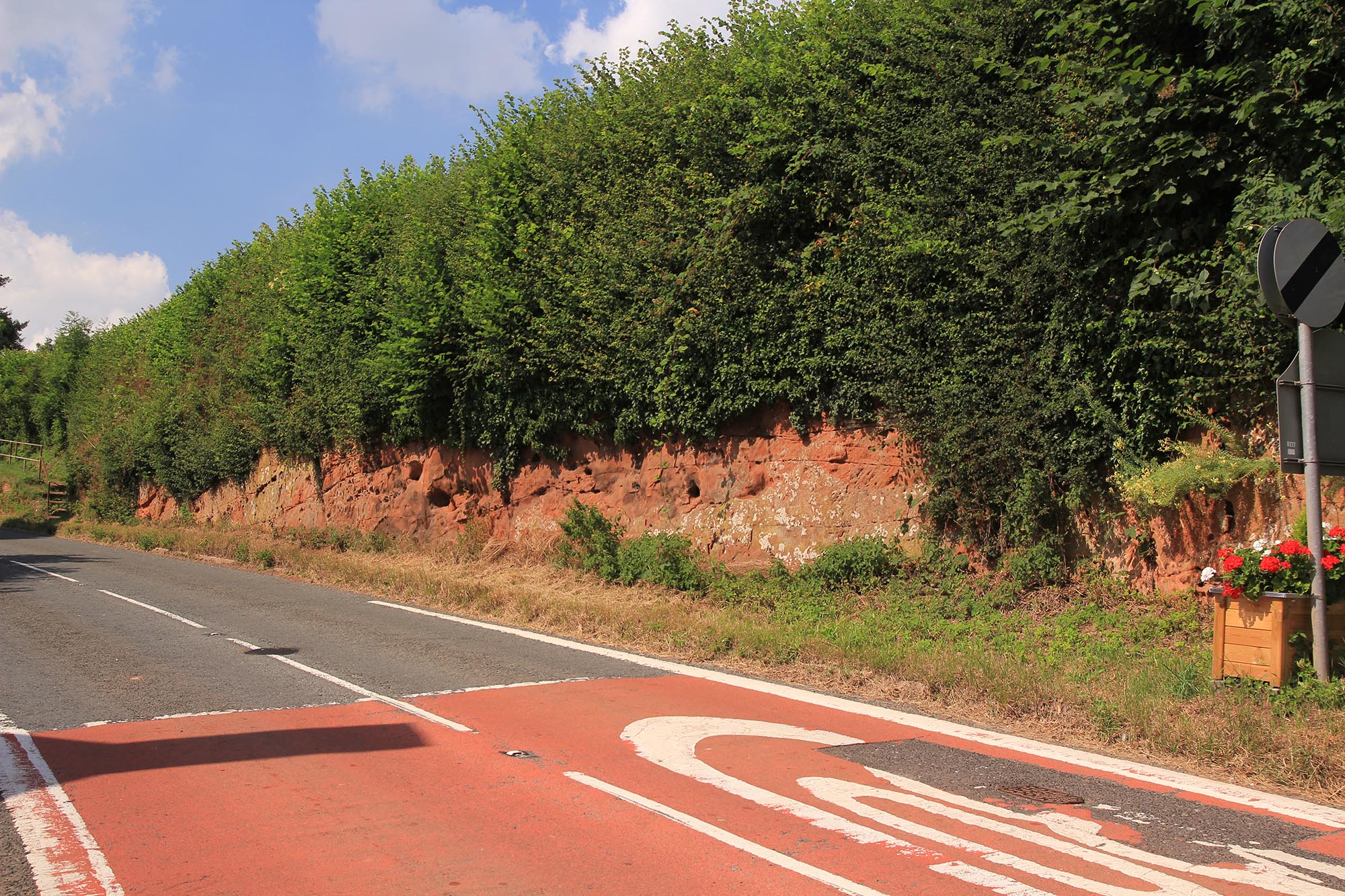 This nearby road cutting shows evidence of rivers crossing the Triassic desert. Being on the roadside it is too dangerous to view, so we have provided several close up photos of the rock face below.

The rock face shows small river channels (seen in cross-section) which have been cut out by the water, then in-filled as the river channel moved over the desert surface. These rivers may have been seasonally flooded by monsoon rains far to the south. The overall direction of flow of these rivers in this area was west to east. They fed into a main channel(s) which flowed from the south towards the north. For more information look under ‘then’ (in the app). 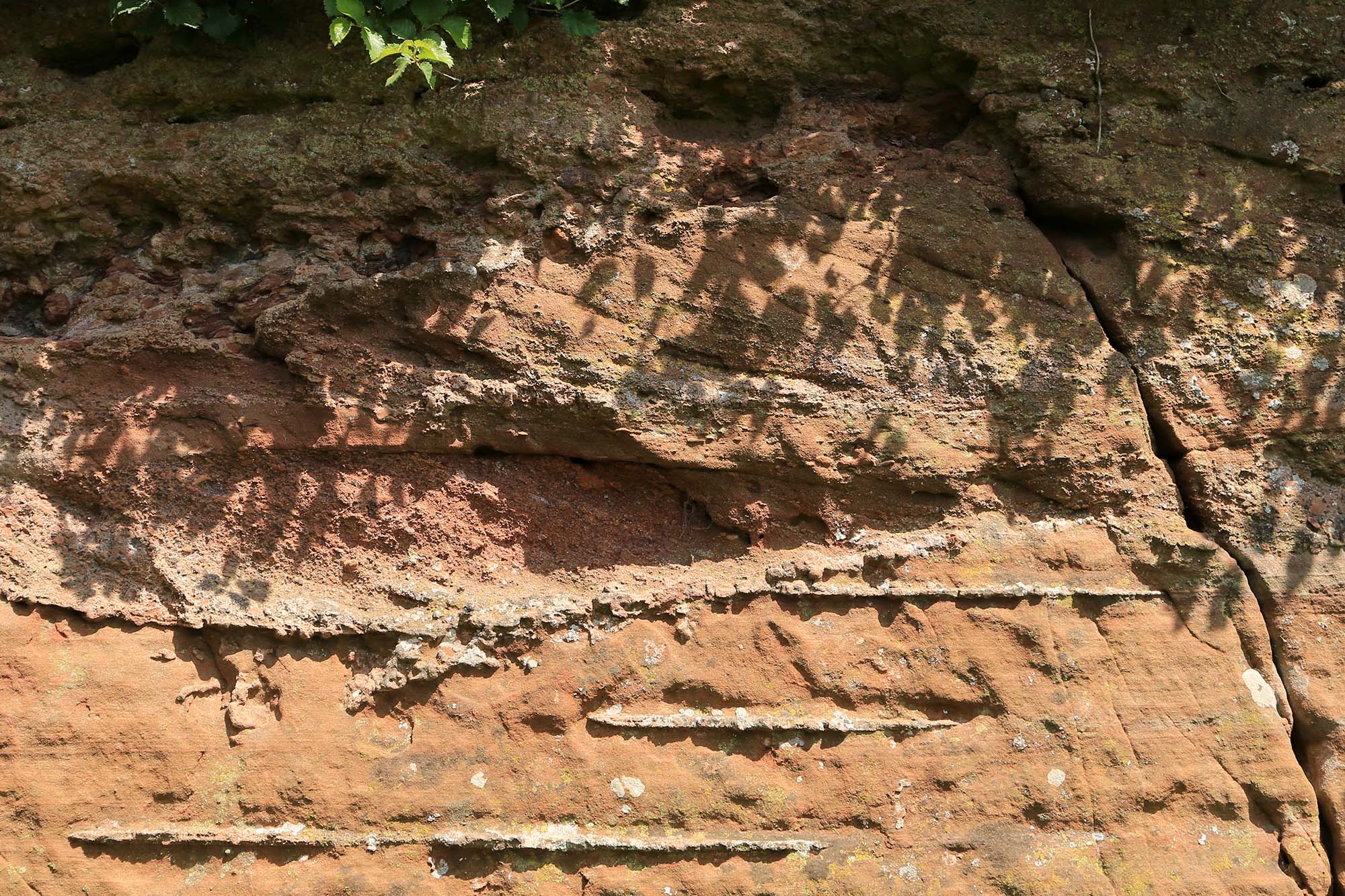 Look carefully and you can see cross-bedding, many pebbles and coarse gritty sediment. These sediments were moved and deposited here by water not wind. The image below has the cross-bedding highlighted. 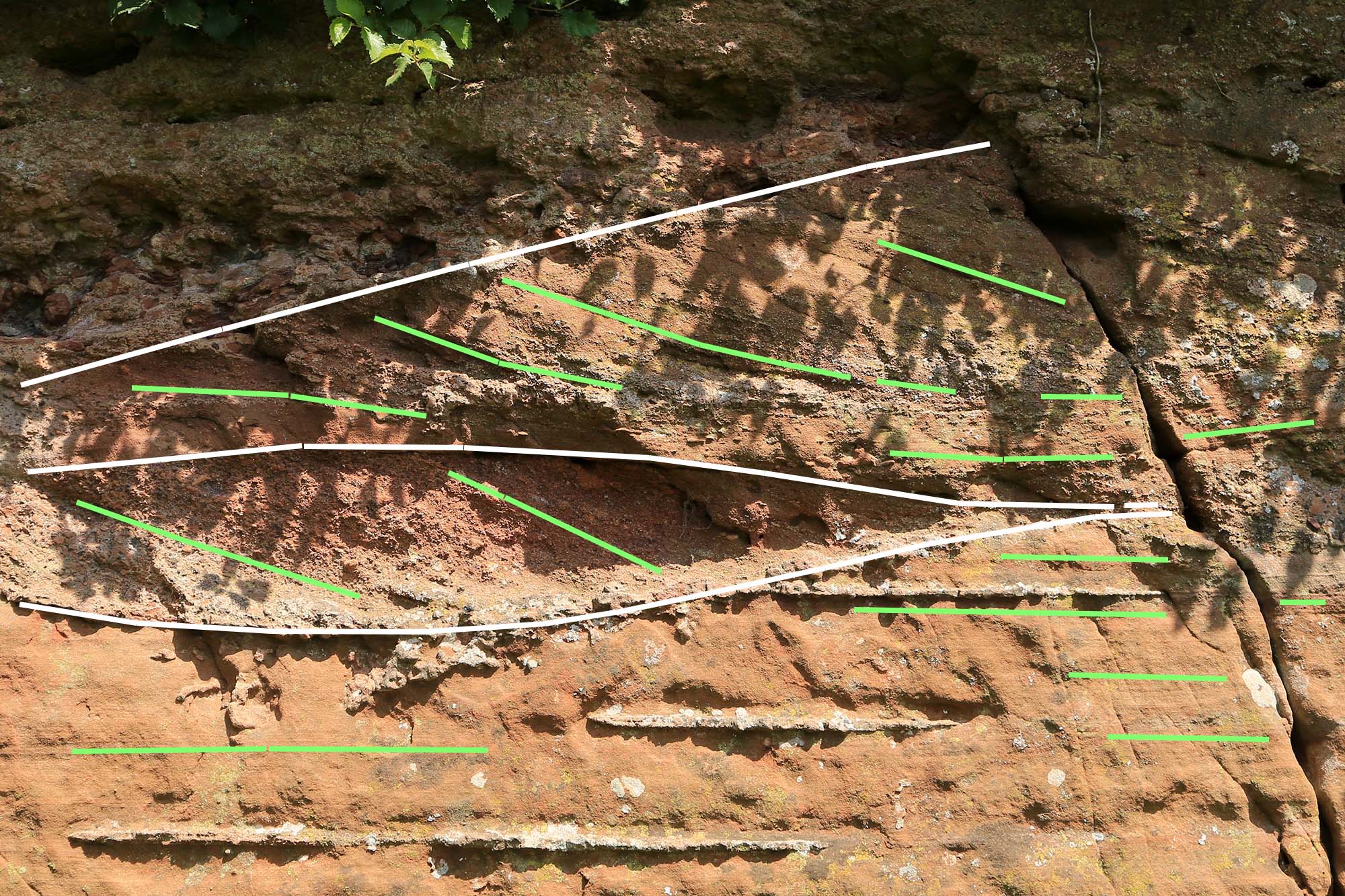 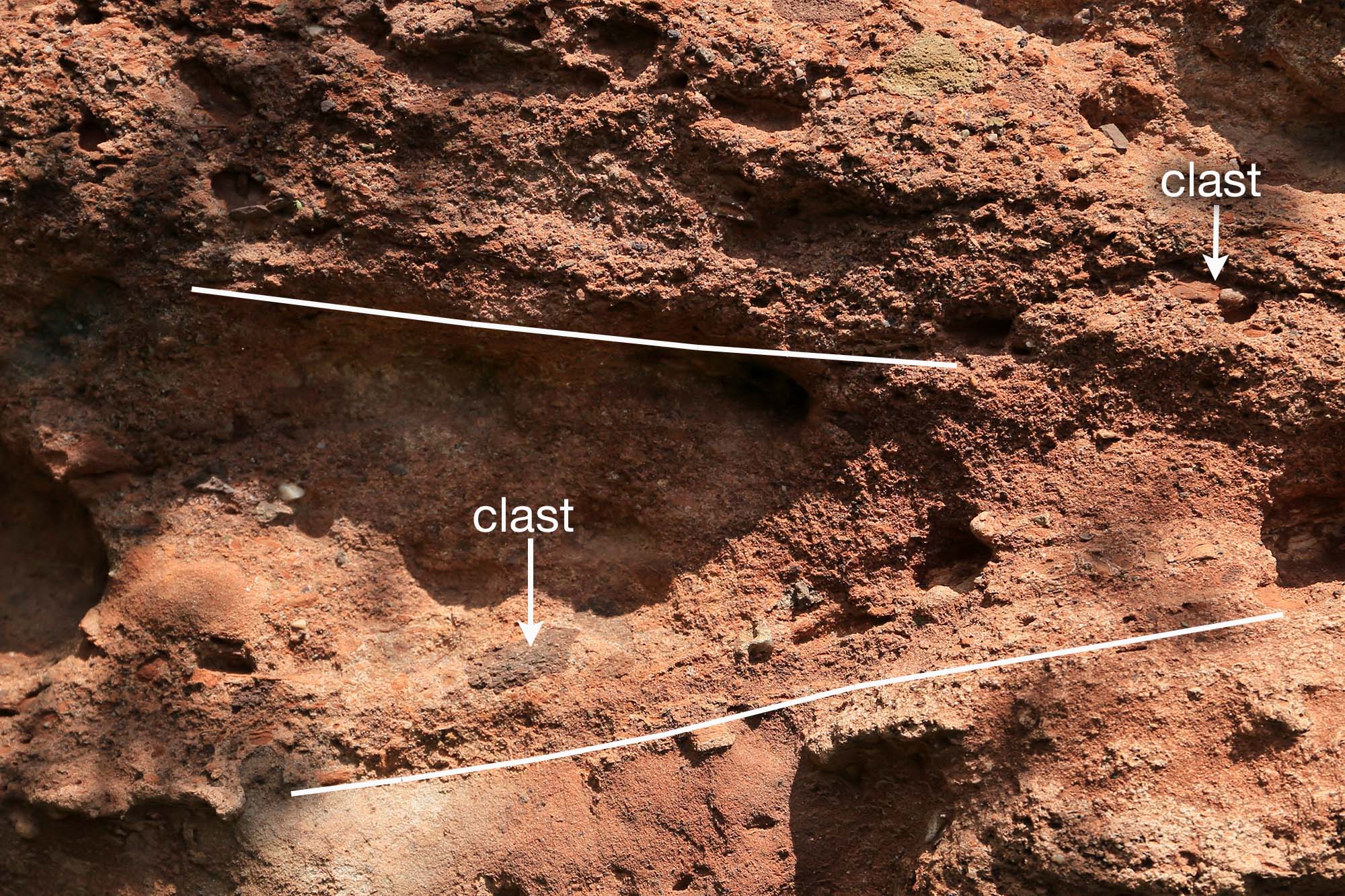 The power of the ancient tiver

These river channel deposits contain clasts  Clasts are pieces of softer sediment that the river has ripped up and then dumped here. This mixed up collection of different sized pieces of rock tells us this was deposited by fast flowing quite deep water. You would have been swept away by this river!

What type of bedding is most obvious in the quarry face?

The picture of the road cutting shows the same red Triassic soft sandstones as here (Nubbins 2b site), but in what part of the ancient Triassic landscape do you think those in the cutting formed?

Task Site 2a
Back to map
Task Site 3