12 Returning home
Back to map 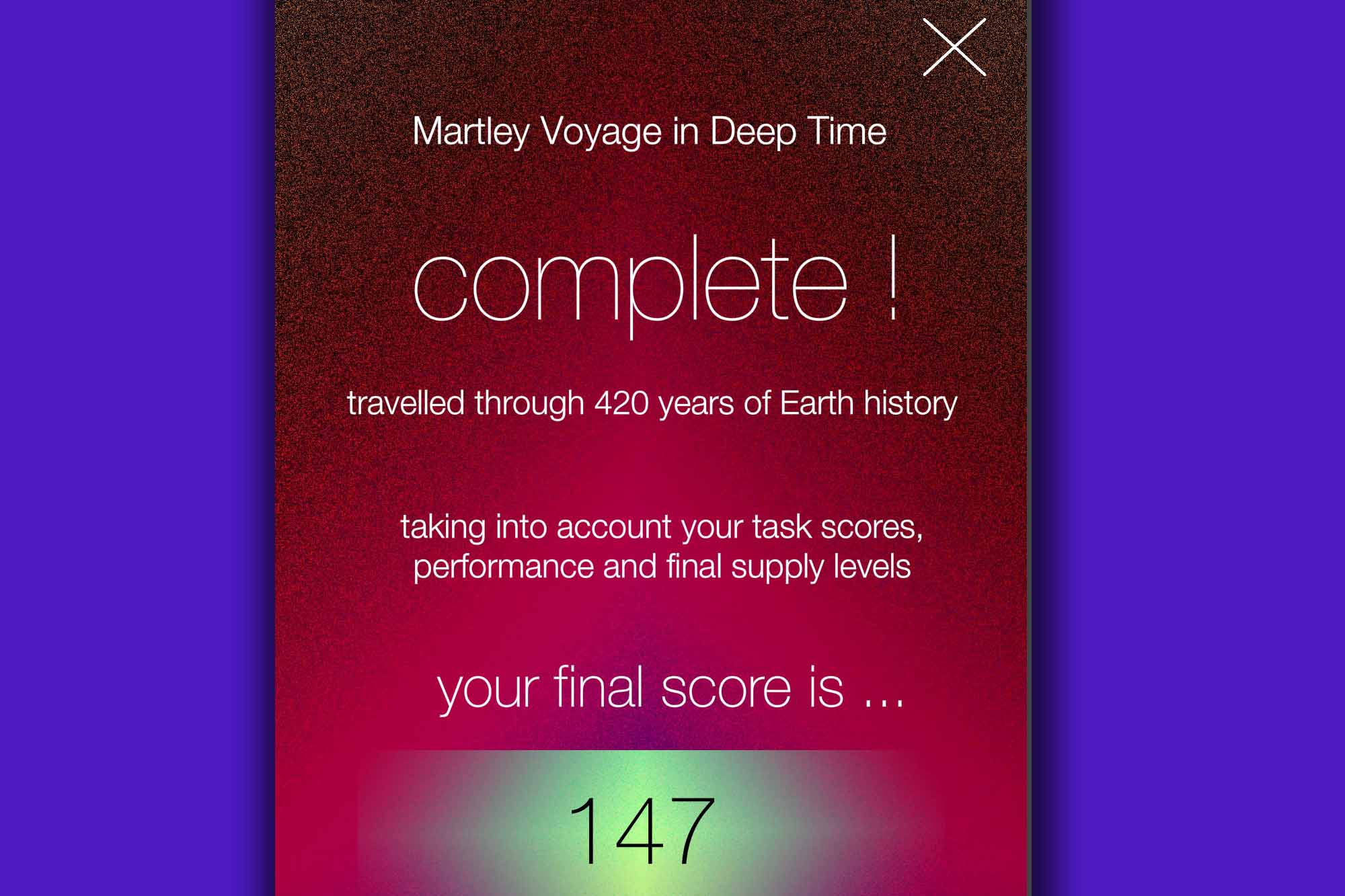 Once you have visited all the Task Sites and answered all the questions for this last site, you should get your final score computed and output on a screen like the example above. But what if nothing happens?

Check the blue lights on the buttons (see diagram below) you see when you select ‘list all’. If any are not lit, or are dim, then that is a Task Site where you have missed answering all or some of the questions. What to do? You are allowed to answer up to 10 questions without having to go back to the Task Sites, and do so without any penalty. If you have missed answering more than 10, you will have to go back to the Task Site(s) involved, or unlock the Voyage to be able to answer the missed tasks – that will cost you a score penalty. Another option would be to Save the Voyage (under Health – Score) and then continue the Voyage another day, completing the missed sites. When you save a Voyage all you current score information for each Task Site is saved. 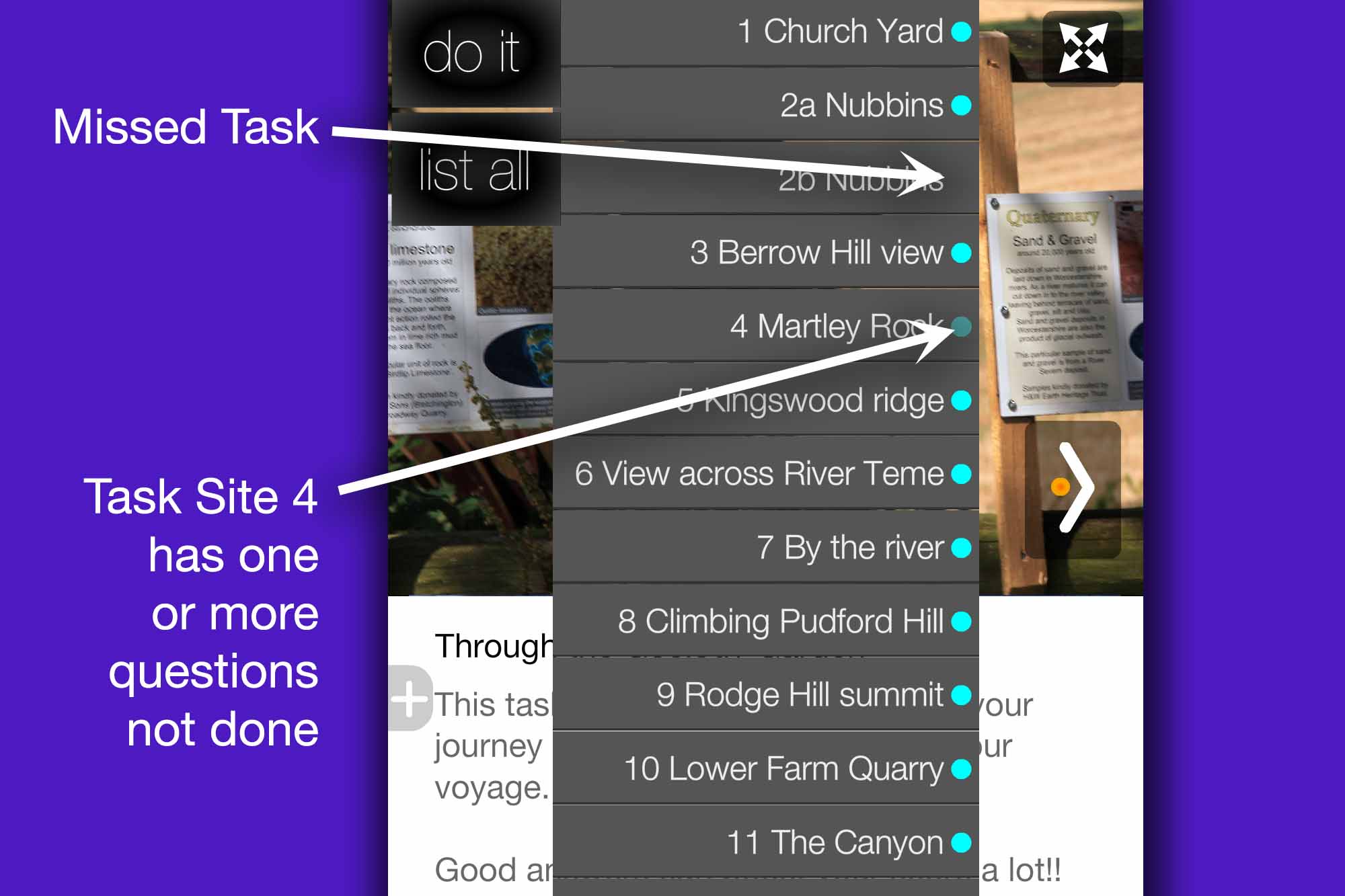 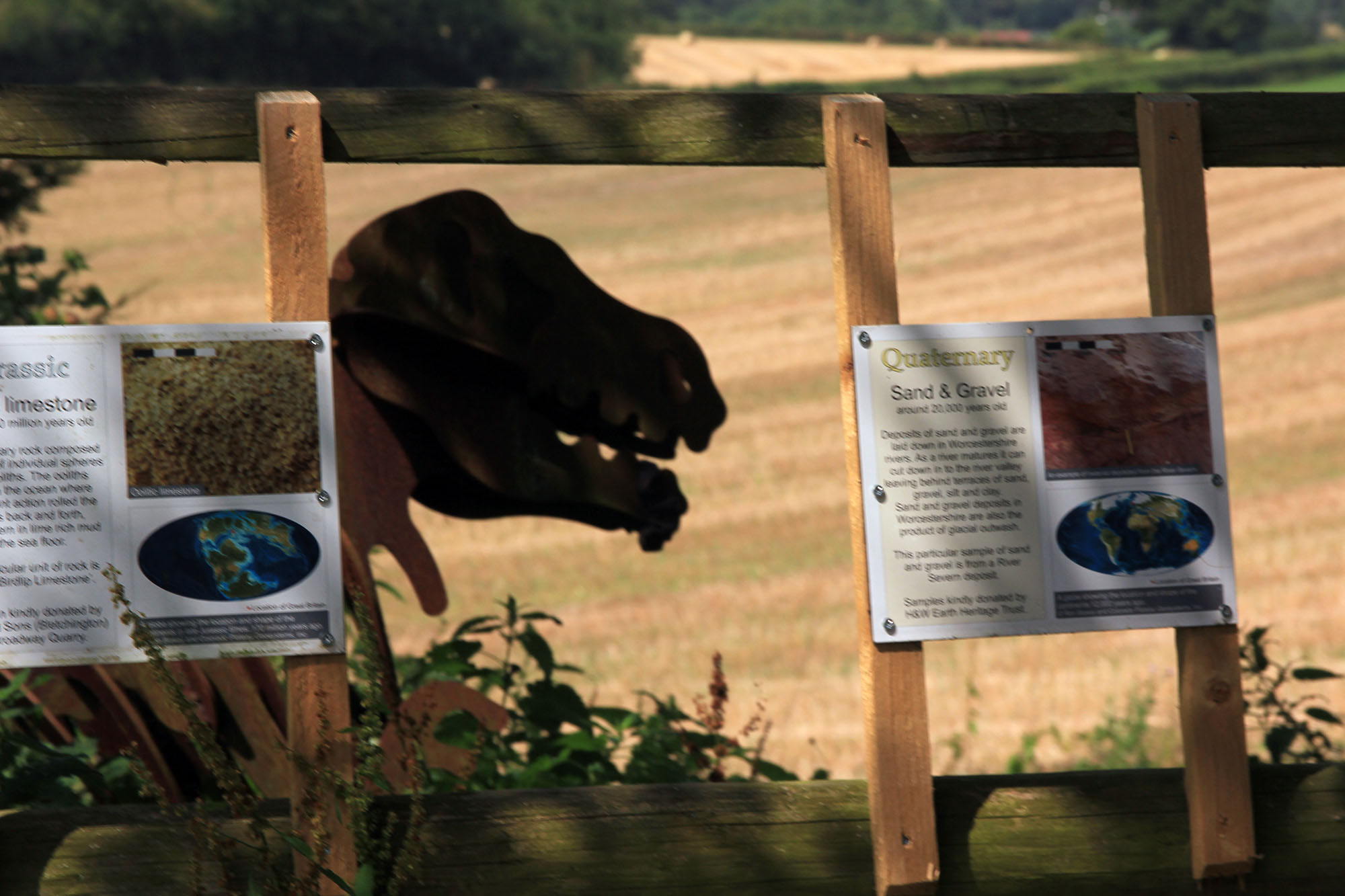 Through the Geology Garden

This task can be done anywhere on your journey back to where you started your Voyage. Good answers can boost your score a lot!! But hurry back, you need to finish with as much Oxygen and Water as possible for a great score.

You are walking back over the rocks of the Triassic desert. The Chantry School Geology Garden is on your route back. It contains large samples of most of the rocks you have travelled over on this voyage. Plus some others, like a volcanic rock which you have not met, but would do on the Lickey Hills Voyage. 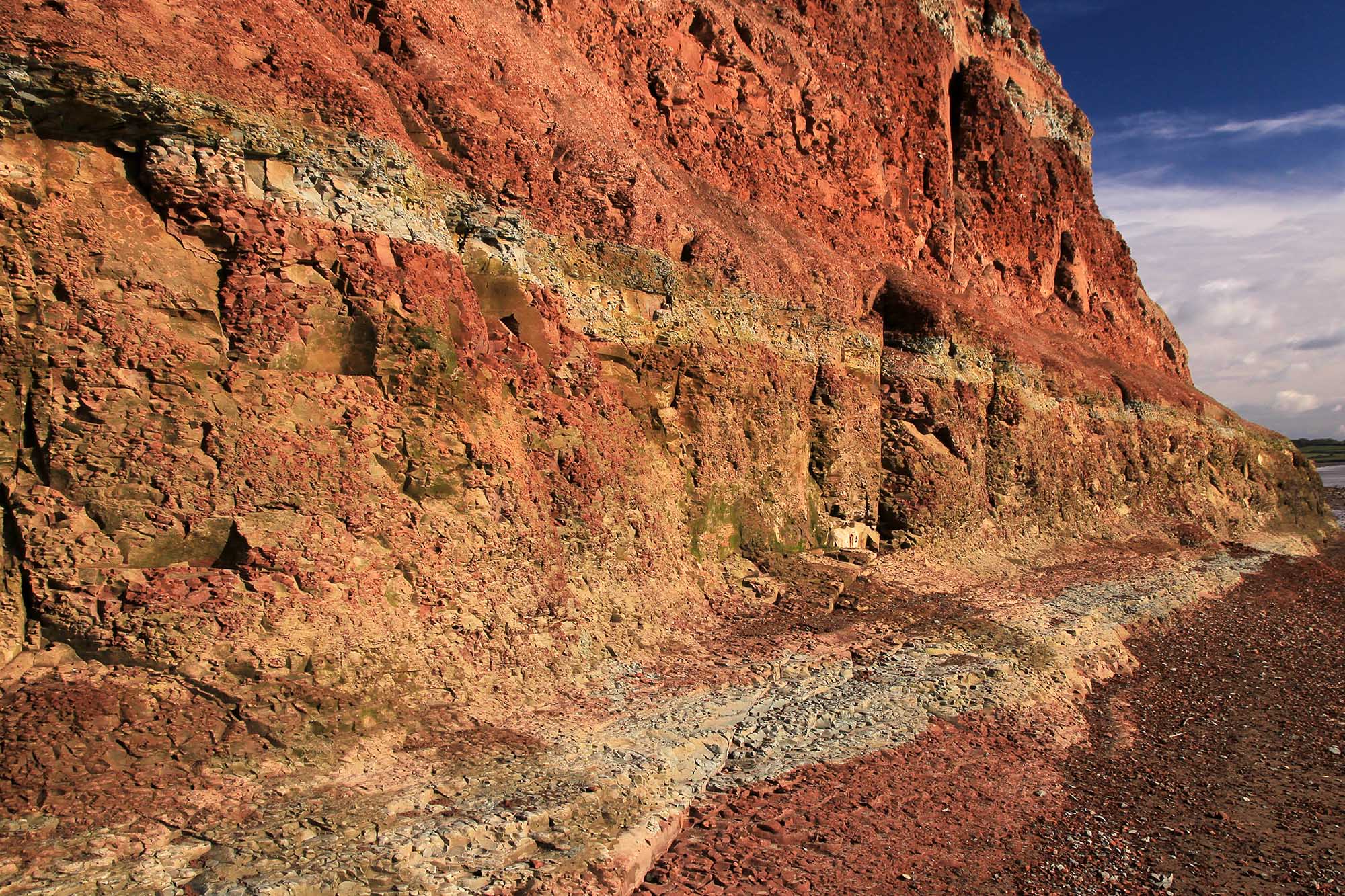 Beneath you now is a red mudstone. It formed from wind-blown dust in the Triassic desert. The mudstone easily weathers and so is not often exposed in a fresh state, so this picture is of the same rock in a cliff on the River Severn.

This Triassic mudstone shows mudcracks (formed when mud dries in the sun), salt deposits and hard lumps called calcretes. These are all evidence of formation in hot arid conditions, where occasional torrential rain storms produce temporary lakes, which then dry out. 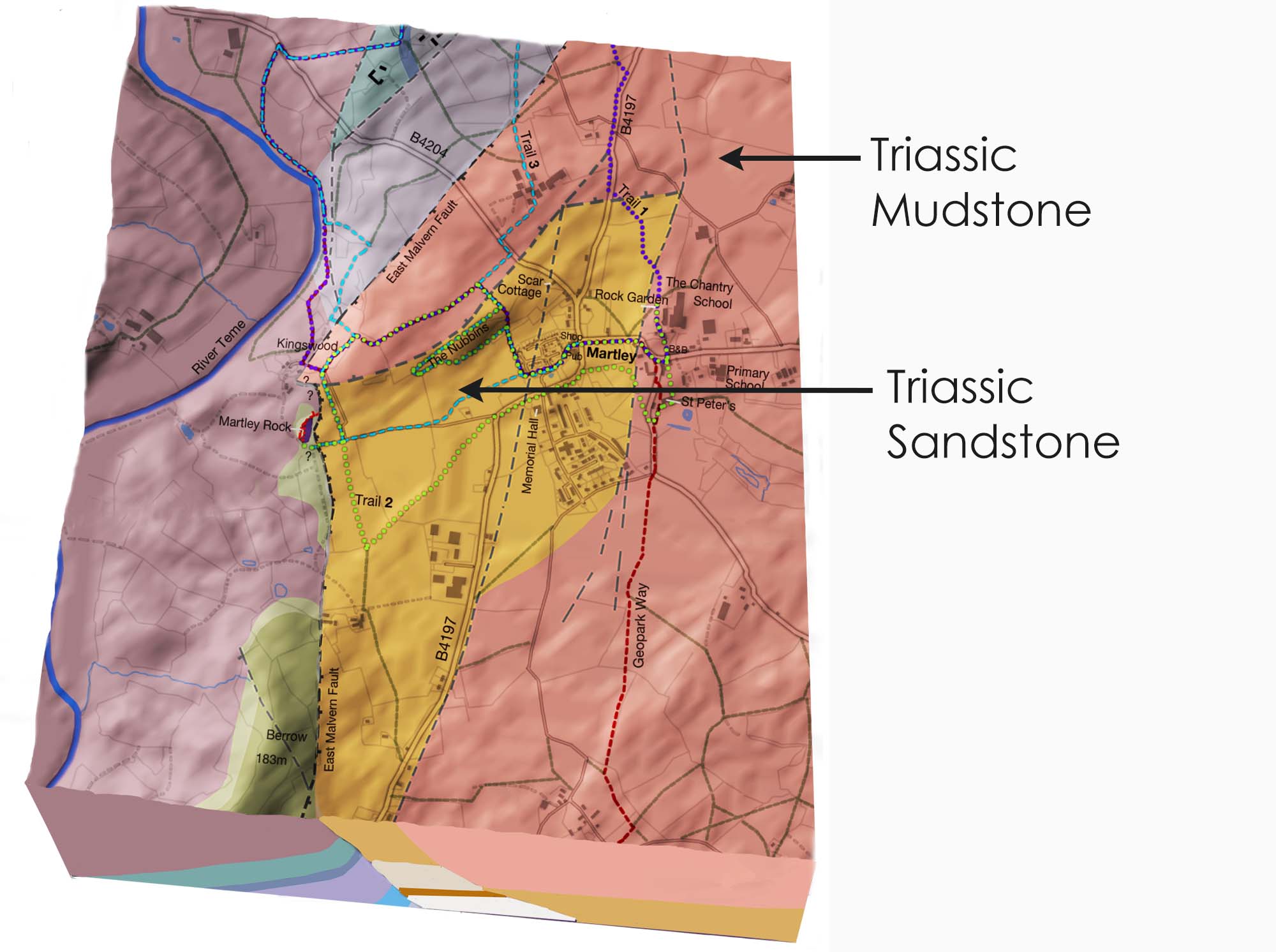 This block diagram of the Martley area shows how the rocks you have walked over, go down into the Earth’s crust (zoom the picture to see this properly). Notice the thick layers of Triassic rocks to the east of a big fault (crack) in the Earth’s crust that goes right under the village!

This fault is a major feature of the geology of Martley and further afield – it goes right down the east side of the Malvern Hills, which is why it has been named the East Malvern Fault. Geologists think it may mark the line along which two ancient island arcs were welded together by the forces of plate movement. 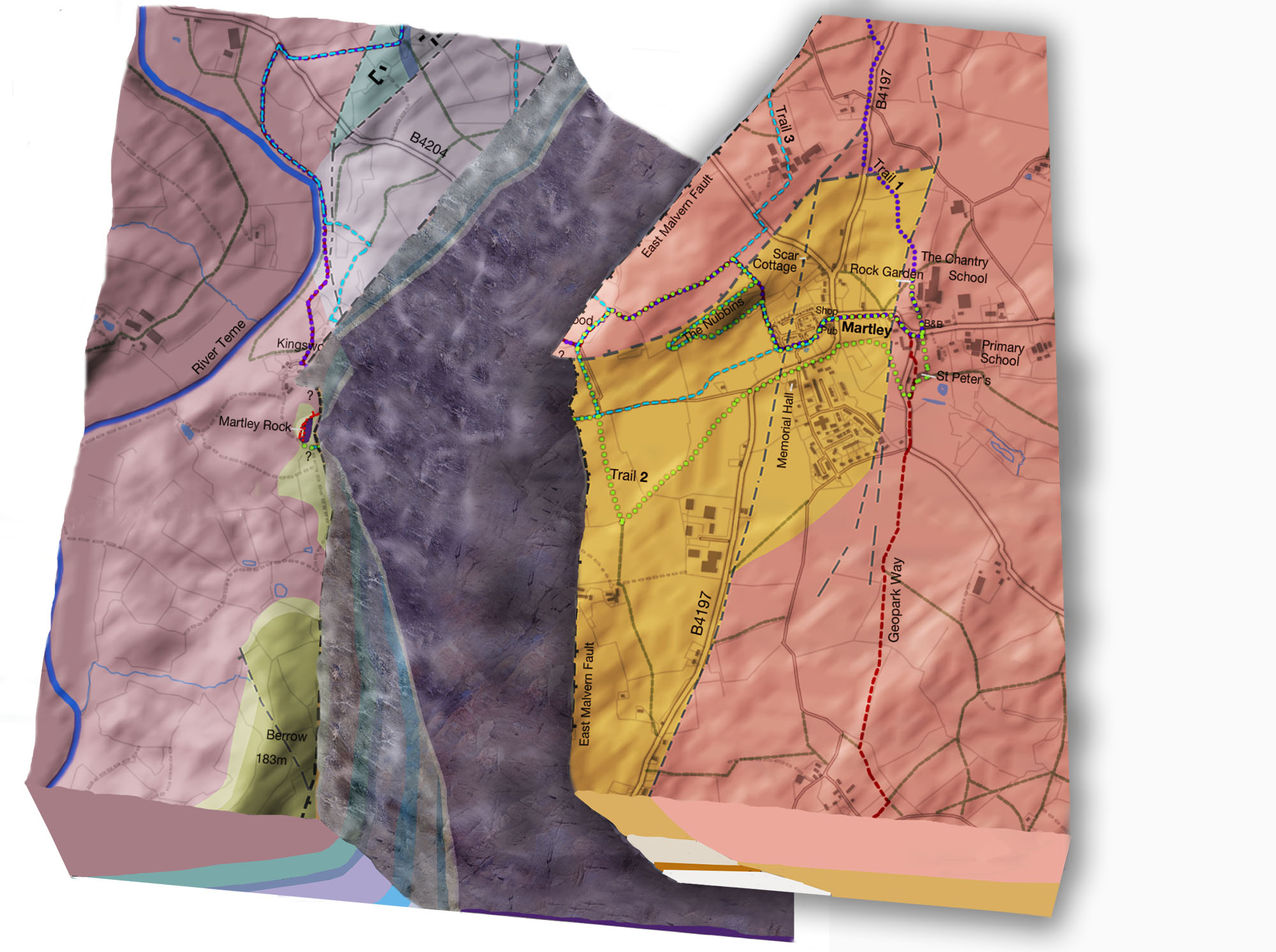 If you could remove all the Triassic rocks you would find a massive valley – up to 3 kilometres deep, nearly twice the depth of the Grand Canyon! This hidden valley is called the Worcestershire Graben and is filled with desert sediments of the Permian and Triassic times.

Geologists know the depth of the valley by drilling down through the Triassic rocks until they bring up rocks similar to the Malverns Complex and also by measurements of tiny changes in the force of gravity over the area. Each side of the Graben is bounded by faults. During the Permian and Triassic this area of the crust was subject to tensional (pulling-apart) forces. As a result the rocks between the faults slowly moved downwards, creating a depression in which sediments accumulated. Graben is the name given to part of the crust which has sunk down between faults. A part of the crust moved upward between faults is termed a Horst. 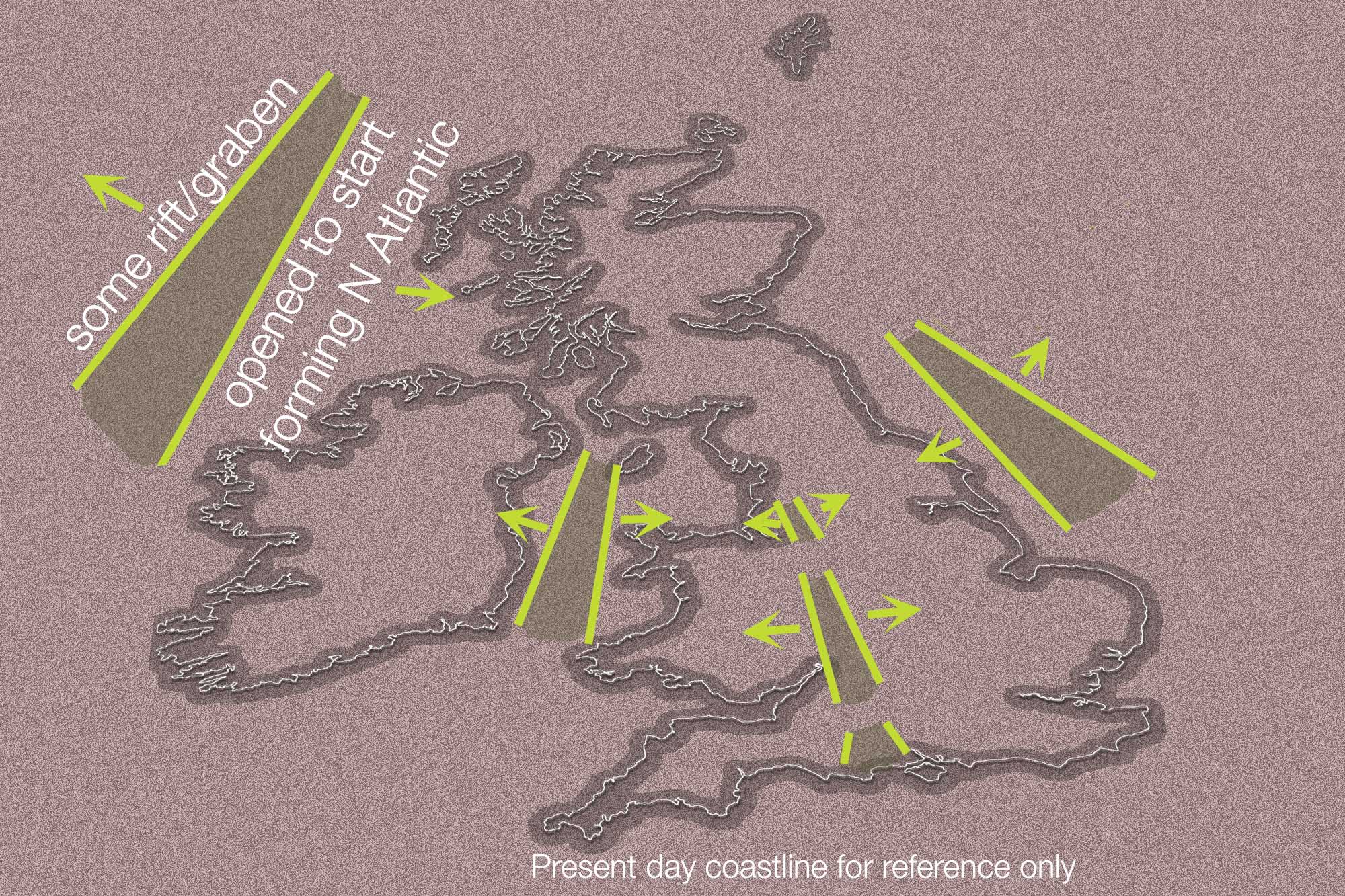 Splitting apart in the Triassic

In the Permian the supercontinent Pangaea (this area was in the midst of it) began to split apart. Grabens (small rift valleys) formed beneath this area and under what today is the Irish Sea and North Sea. Any one of these could have opened up to form the North Atlantic Ocean. If that had happened in the Worcestershire Graben, then parts of this area would now be on the eastern side of America!

The Worcestershire Graben extends north into the Cheshire graben (big salt deposits formed there) and to the south into the Wessex graben. The Irish Sea and North Sea both sit over areas of the crust where large amounts of rock have sunk down between roughly north-south faults, under the tensional (pulling-apart) tectonic forces of the Permian and Triassic. By the Jurassic the North Atlantic was opening, accompanied by extensive eruption of basaltic lavas from fissures in the crust. The long since solidified remains of those lava flows can be seen today along the Antrim coast of Northern Ireland (Giant’s Causeway) and in places along the western side of Scotland, e.g on Skye.

Which of the following rocks can be made from the remains of lots of sea creatures?

The limestone with lots of fossils in it is named after which place?

The oldest rocks we saw on the Voyage are named after which hills?

The colour of the Devonian rocks and soils to the west of Martley is:

The colour of the Triassic rocks and soils to the east of Martley is:

Which places and events have you experienced on the Martley Voyage?