6 View of Beacon Hill
Back to map 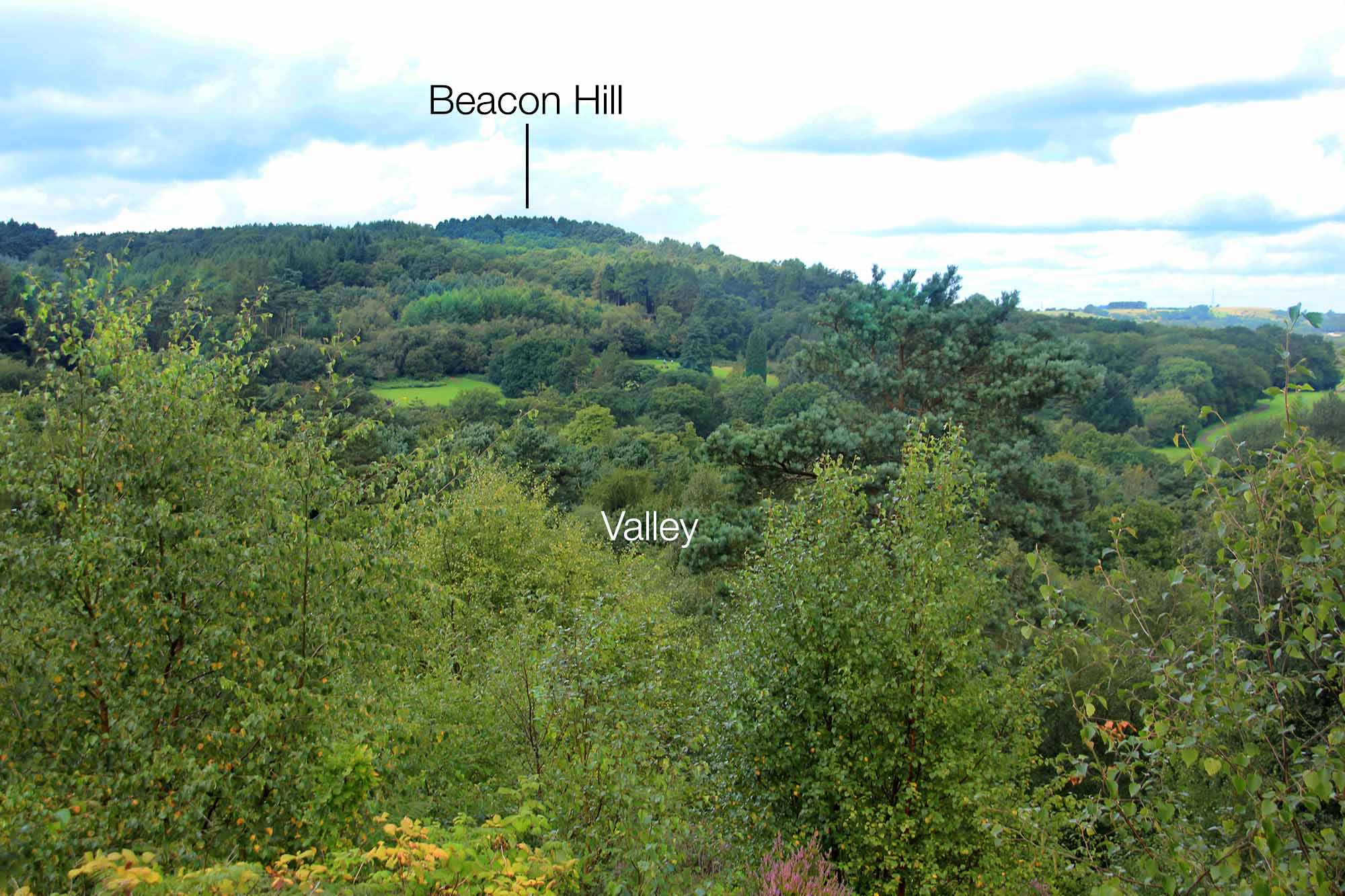 Why is the valley here?

This is a beautiful view point as you look across the valley from Bilberry Hill towards Beacon Hill, but stop to think about why there is a valley. Have a look at the map for clues. 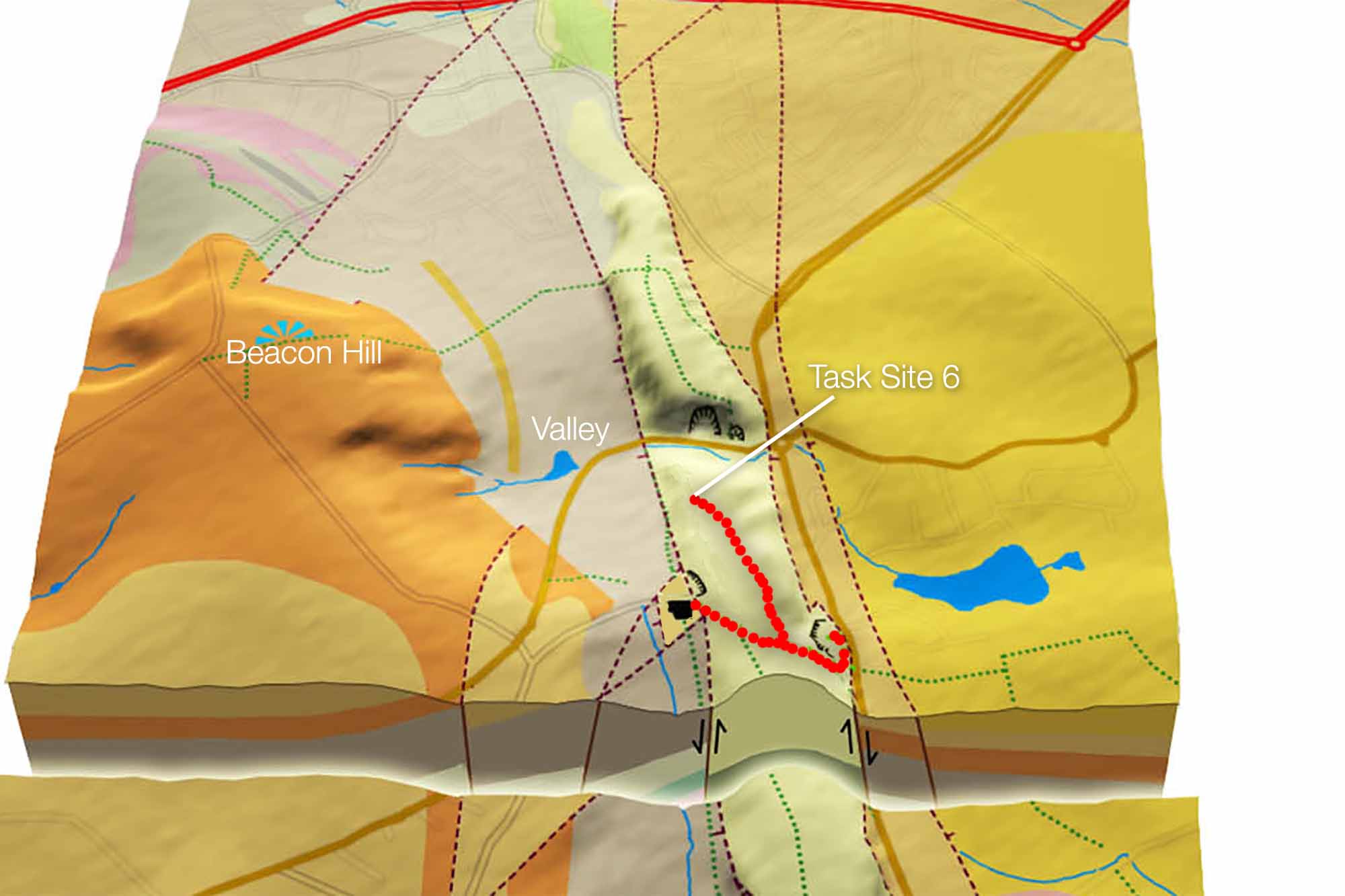 Rocks beneath the valley

By touching the main map (using the app) in the area of the valley, you should find the rock there is mudstone from the Carboniferous period of geological time.

When you touched the main map in the area of the valley, the label ‘Carboniferous Mudstone’ showed at the foot of the screen. While the map is showing that label, have a look at the ‘then’ tab to see what the land looked like here in Carboniferous times. 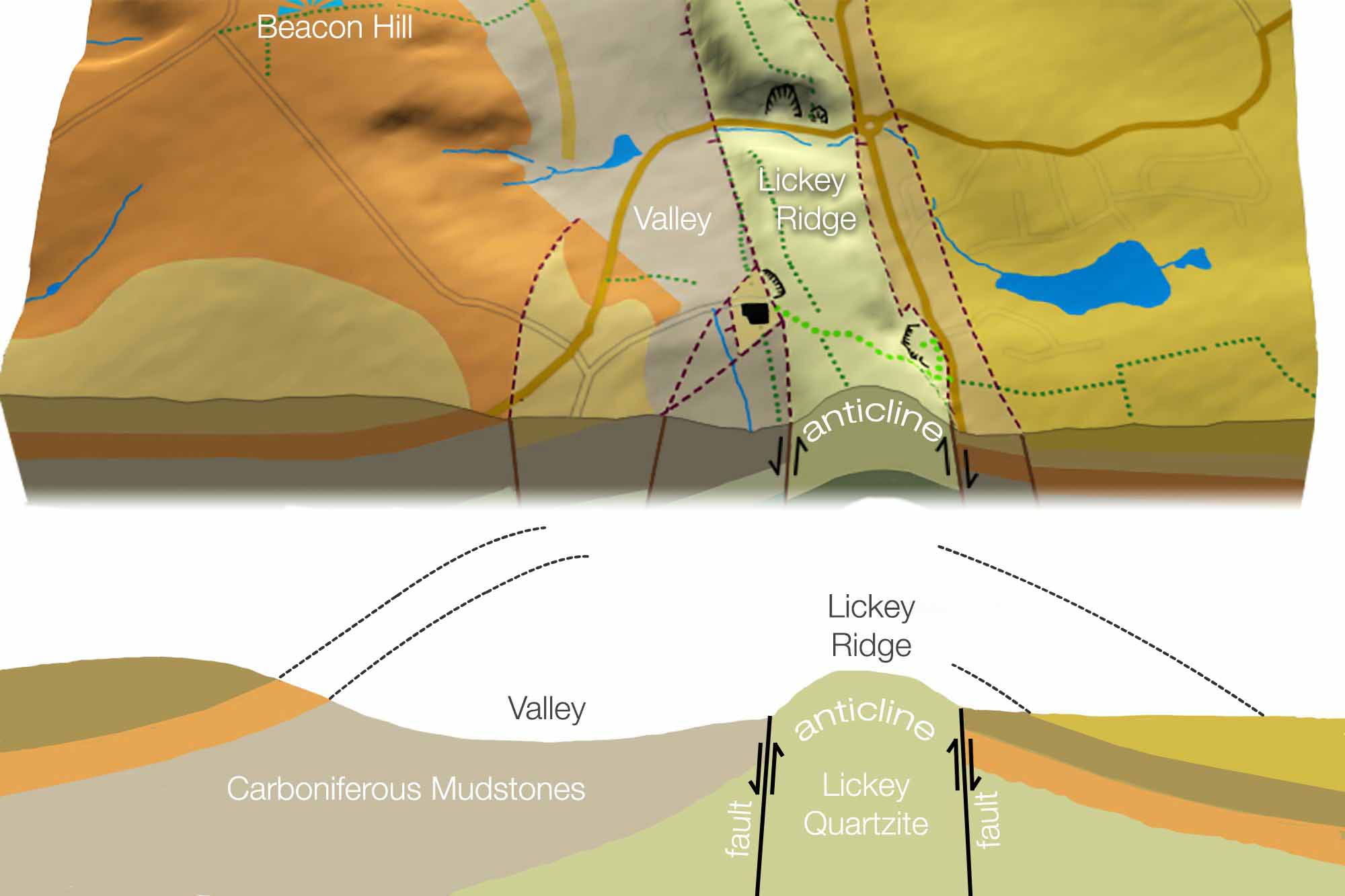 Another reason for the valley

Remember from the quarry, that the Lickey Quartzite rocks are folded. Sometimes when pressure is applied to rocks which can cause them to fold, they may fracture as well and slip along a flat surface that we call a ‘fault’. The diagram below shows a fault either side of the Lickey Hills Ridge. You can see how the rock layers have slid down on either side of the ridge of Lickey Quartzite. Also the rock beds are folded into a very large upfold (called an anticline), with the spine or ‘axis’ of the fold running N-S along the Lickey Ridge. It is the crest of this fold that has been pushed up between the faults. Erosion over millions of years has removed much of the folded rocks, leaving behind the hard core of Lickey Quartzite forming the ridge.

A block of rocks thrust upward between parallel FAULTS, like we have here at the Lickey Hills, is called a horst. The opposite, when the block has sunk down, is called a graben. Which rocks moved up and which moved down is all relative. There would probably have been movement both sides of the fault plane. When rocks FOLD up into an arched shape, we call it an anticline. A downward fold is called a syncline. At the Lickey Hills we have both a horst and an anticline. 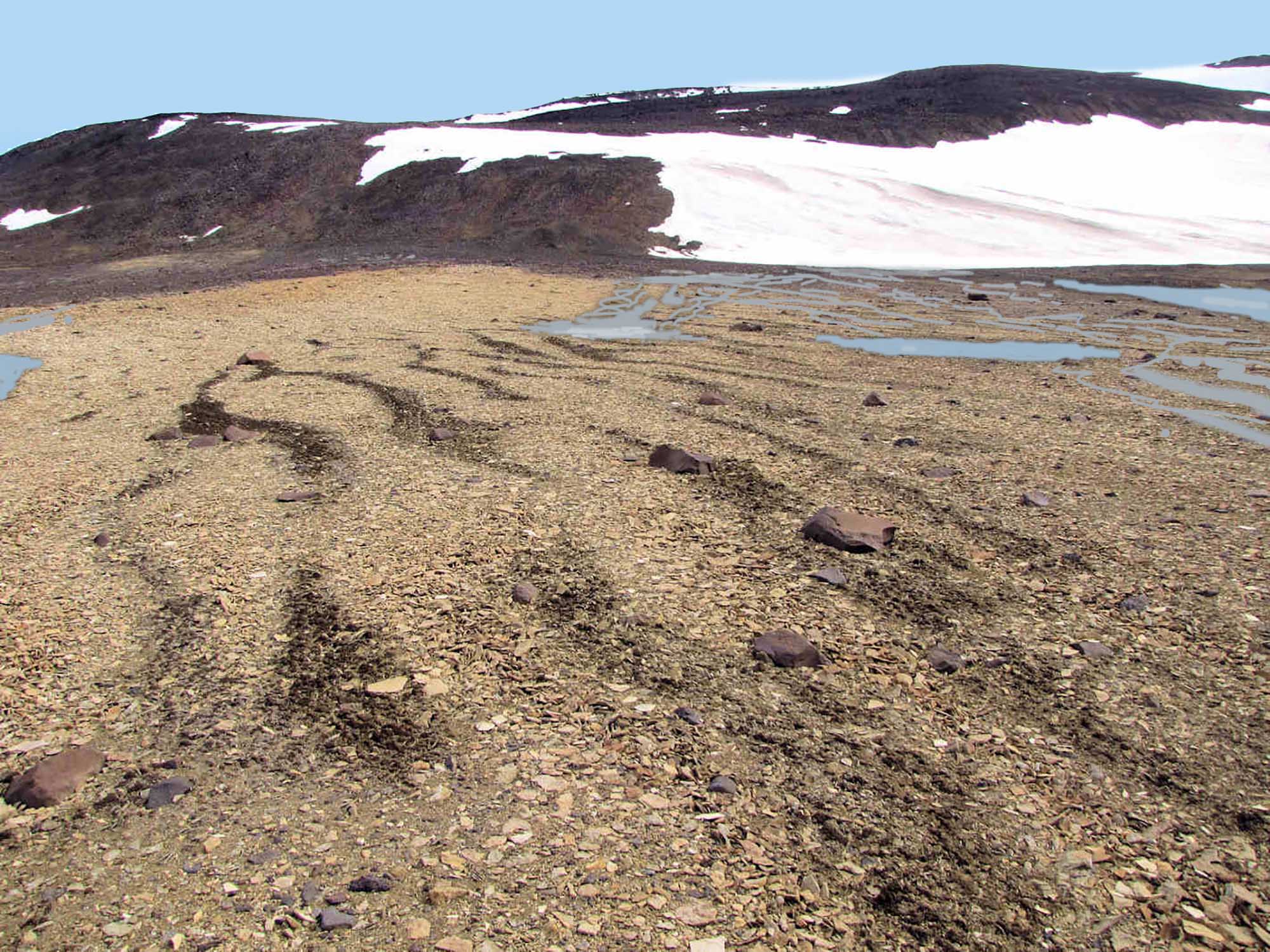 It is thought that the softer Carboniferous mudstones we see now in the base of the valley, and other soft rocks to the east of the Lickey Hills, were eroded away by ice during the last ice age. The ice had much less effect on the hard Lickey Quartzite, and the upwardly folded and faulted rocks were left exposed as the high Lickey ridge after the ice had gone.The picture above illustrates how the area may have looked as the ice age was retreating. The Lickey Hills ridge, still covered in ice and snow is surrounded by a plain of pools, lakes, river channels and stones left by the melting ice. 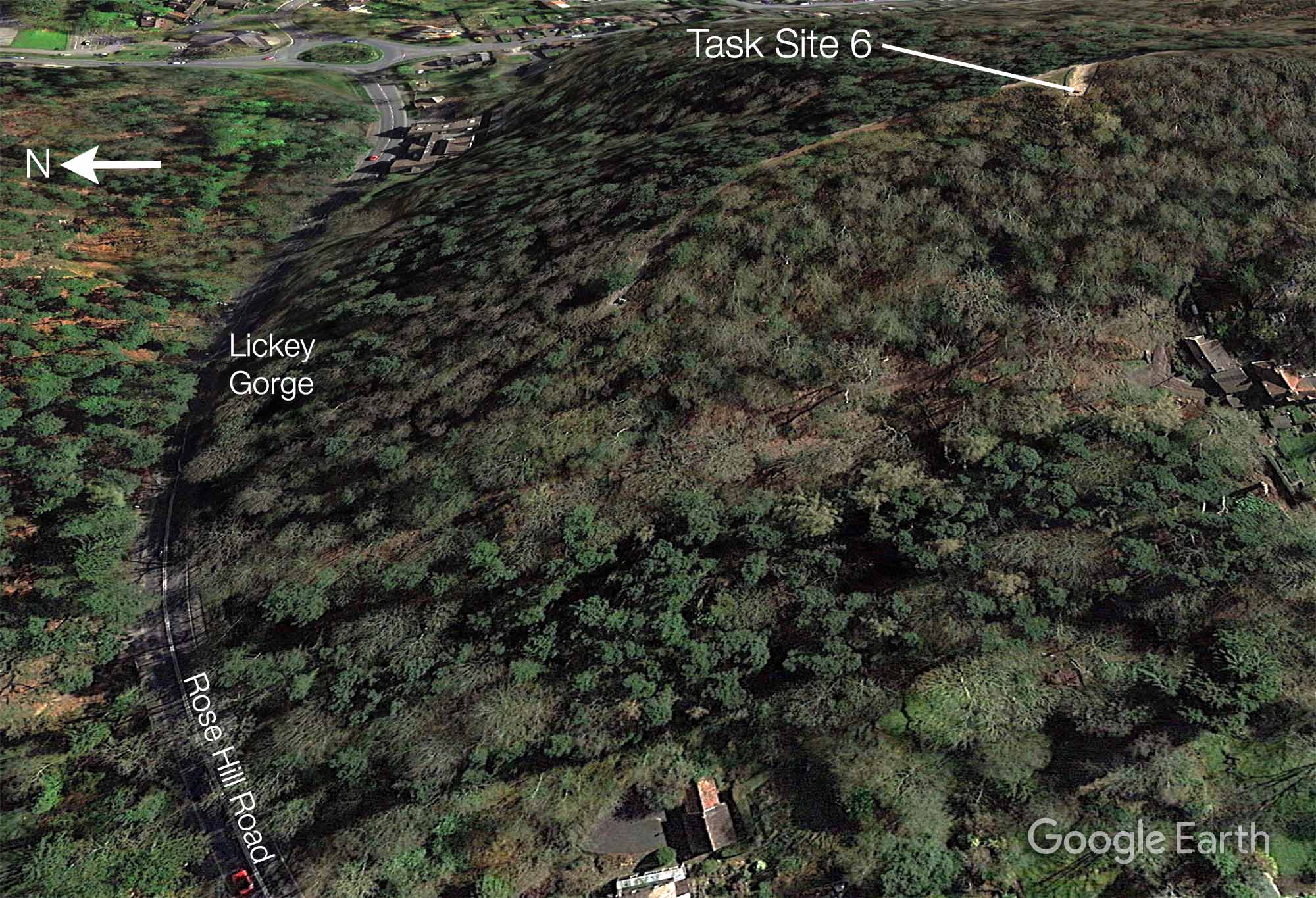 There is just one place where erosion has cut through the Lickey Quartzite. A few hundred metres north of where you are standing on Bilberry Hill, there is a deep gash in the Lickey ridge, which we call the Lickey Gorge, where the Rose Hill road now runs west-east through the ridge. 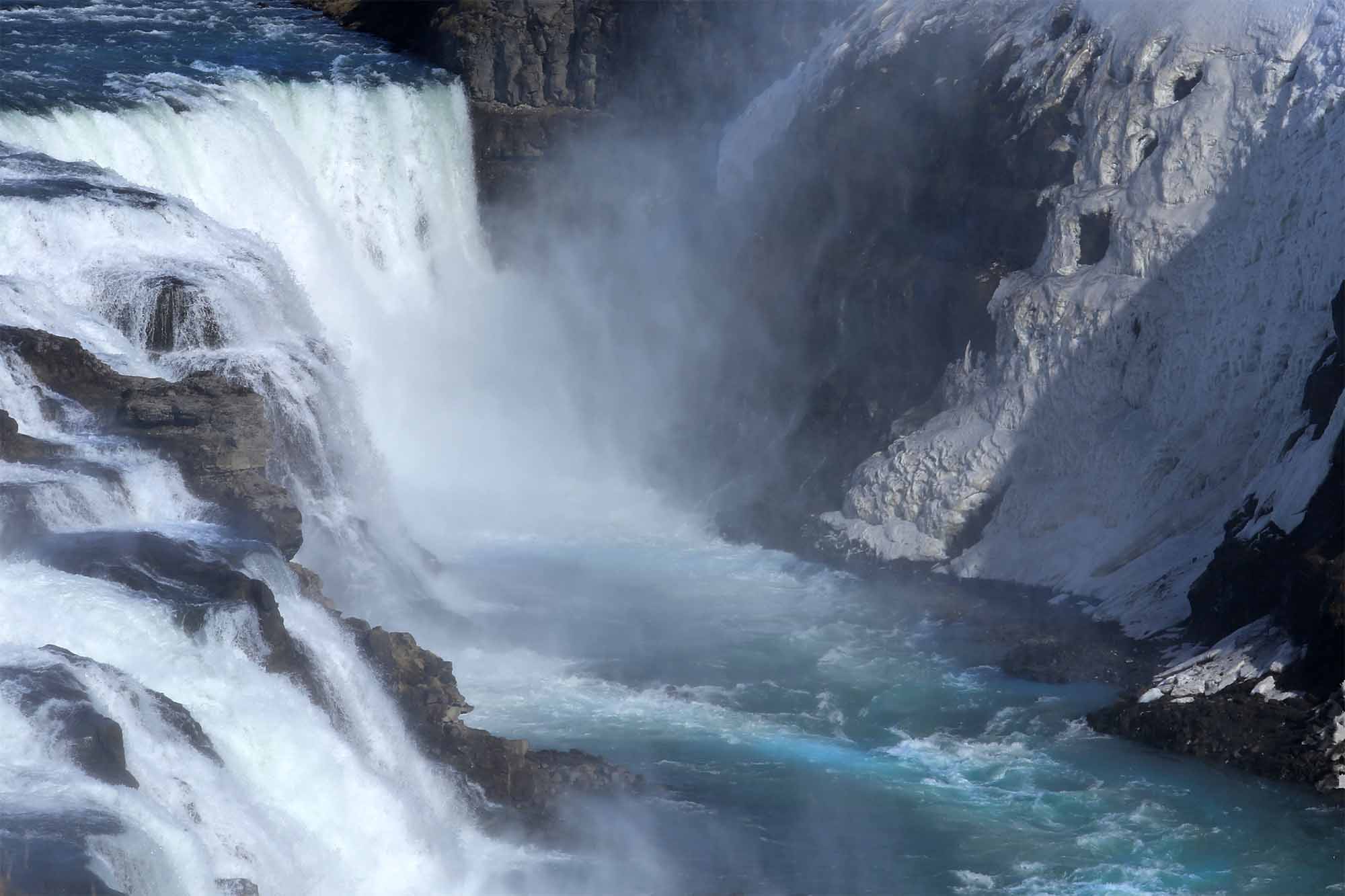 One theory about the Lickey Gorge is that it was formed by massive torrents of water overflowing eastwards from a lake of glacial meltwater, dammed west of the Lickey ridge, towards the end of the last ice age around 12,000 years ago. Meltwater rivers carry huge volumes of water from melting glaciers and have tremendous erosive power – far more than any river we have in Britain today. Although this sounds convincing, no evidence of a dam or debris from it has been found as yet.

This picture of glacial meltwater in Iceland shows that a large volume of fast moving water can cut a substantial gorge through even the toughest of rocks (basalt in this example).

There is low ground between Bilberry Hill and Beacon Hill mainly because: