2 View Point
Back to map 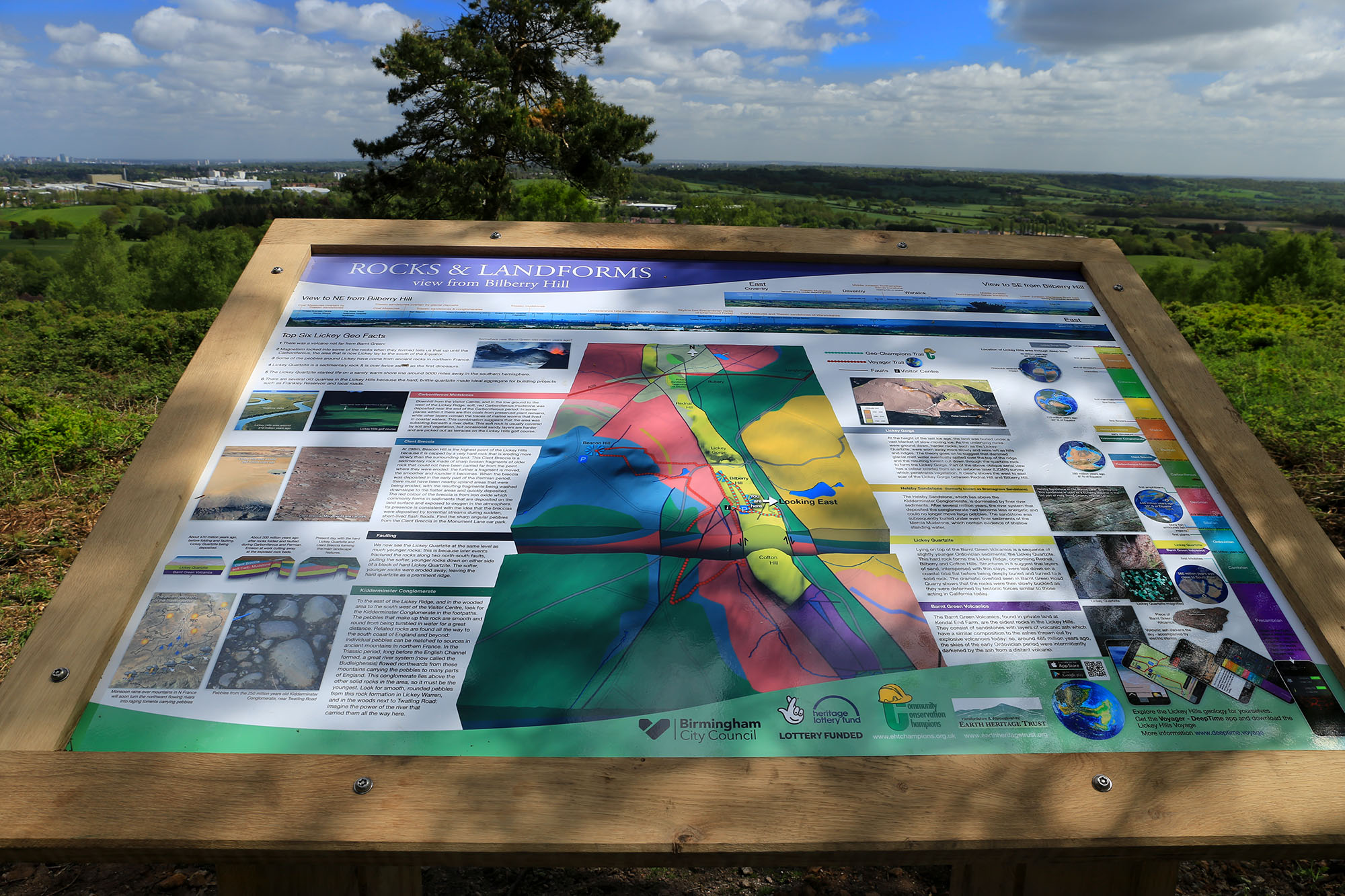 If you are starting the Voyage at this place (Task Site 2), then ideally you should have a quick read through the information for Task Site 1 (the Visitor Centre), before doing anything else. It explains some basic concepts about the history of the Earth and how it works that will be useful on your Voyage. The questions for Task 1 could be answered now or at the end of your Voyage. You will need to do the questions if you want a final score when you finish.If you are just out for a short walk today and do not have time to read the information for Task Site 1, that is OK – it helps, but it is not essential. You can start your Voyage here at Task Site 2 if you prefer. 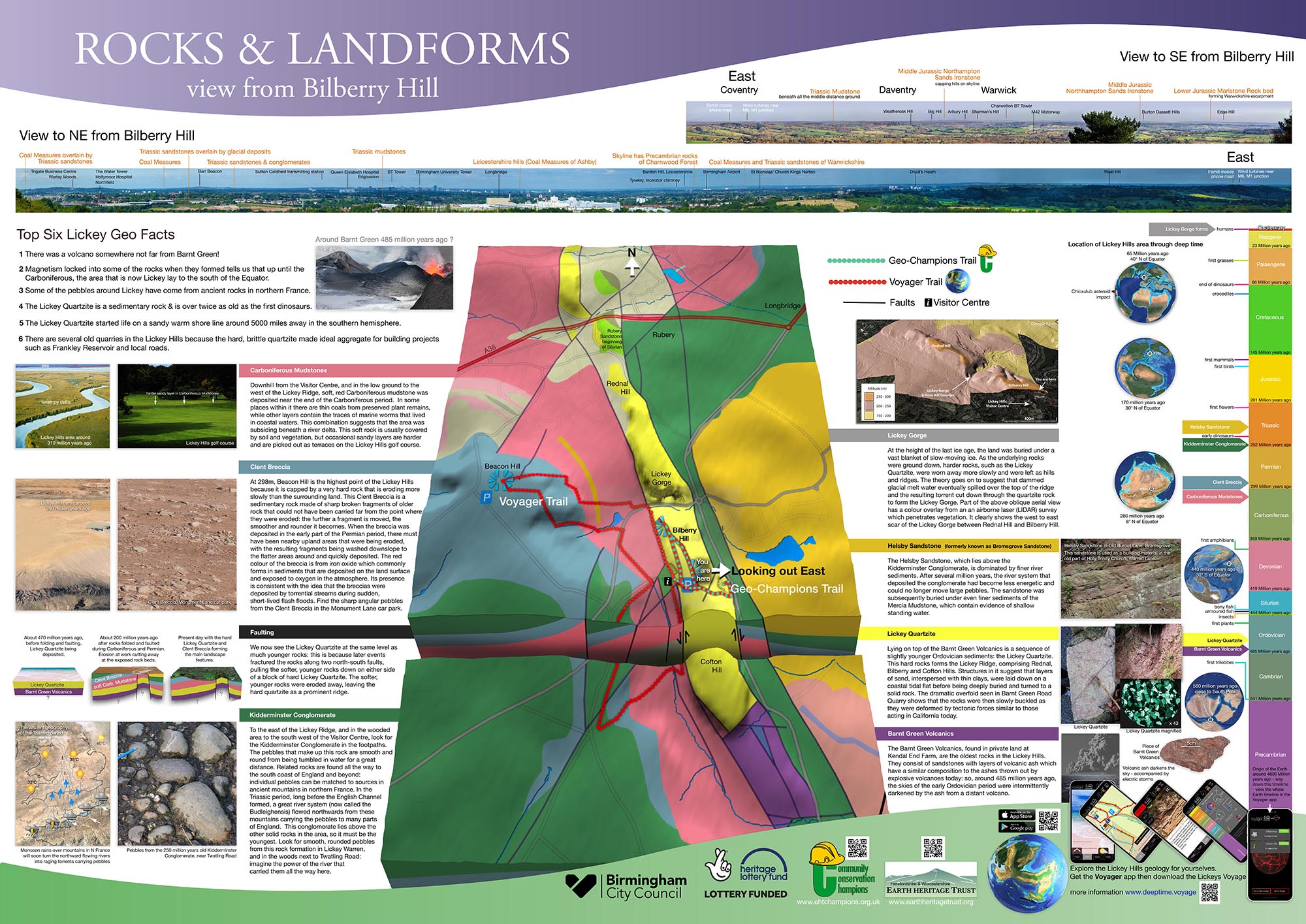 The display board provides information of places that can be seen from this view point – on a day when the air is really clear! The board also provides a 3D view of the geology of the Lickey Hills and information about the rock types of the area. You will meet this rock information as you move through the Voyage.

Geology is the study of rocks, and today you will be an intrepid geological explorer. Enjoy your travels!

The colours used to represent the rocks of the Lickey Hills area are different on the map in the app from those used on the display board. The app uses the colours adopted by the British Geological Survey maps of the area, while the display board uses the colour palette used for geology in other Lickey Hills publications. There are no officially defined colours for specific rocks, or geological periods. 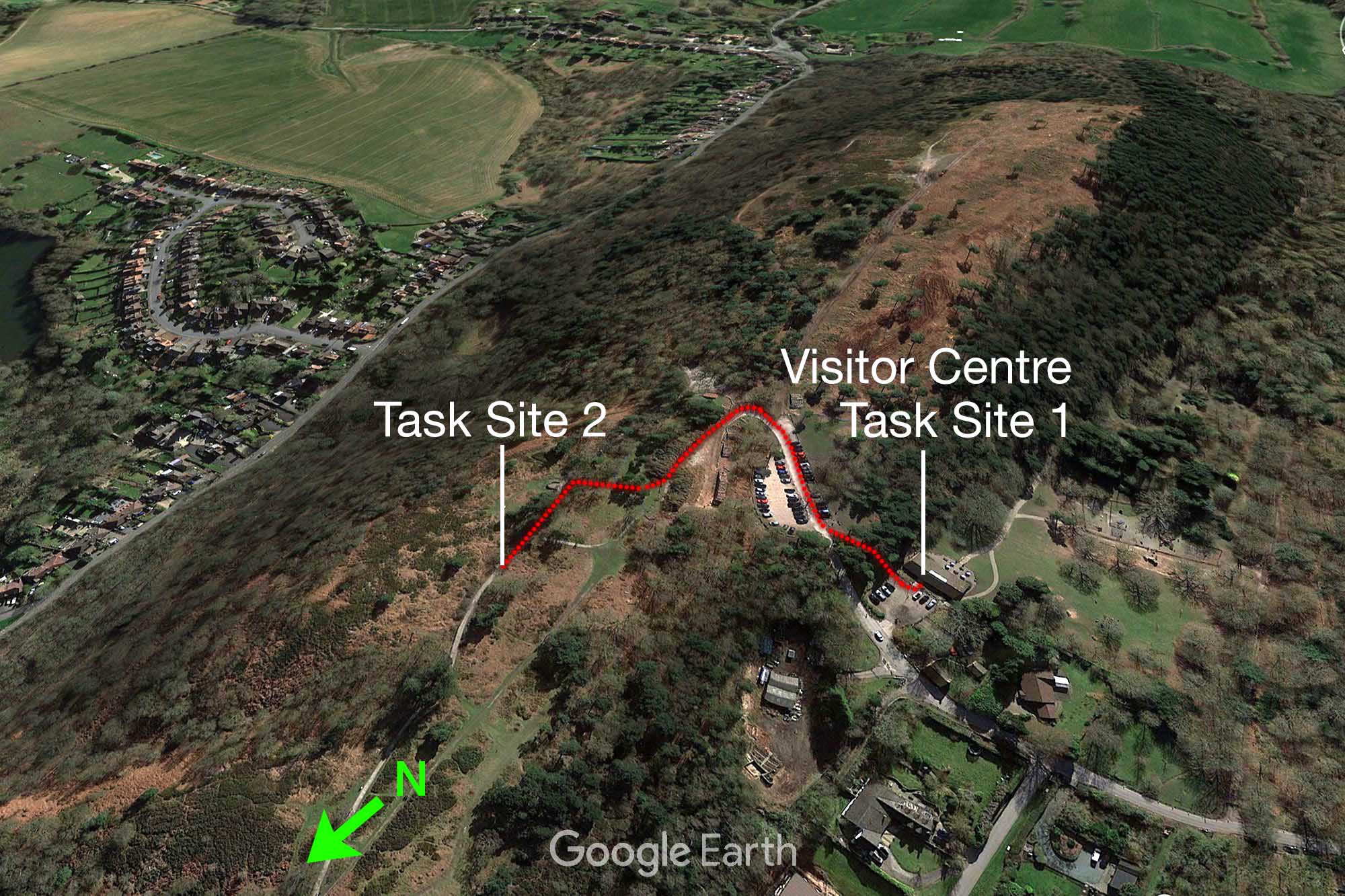 What makes the long, high ridge of the Lickey Hills – why are the hills here? This Voyage provides answers by looking at the rock that the hills are made of (it’s called Lickey Quartzite) – and at evidence for volcanic activity, a lost ocean, rainforests, and massive earth movements that have led to the Lickey Hills of today!

At each task location you will be provided with several screens of information on the ‘task’ tab. Read through these and then have a go at the questions by touching the ‘do it’ button. The ‘then’ tab and the clock both show you what the Earth was like here, millions of years ago. The ‘help’ tab explains more about how the Voyager app works. 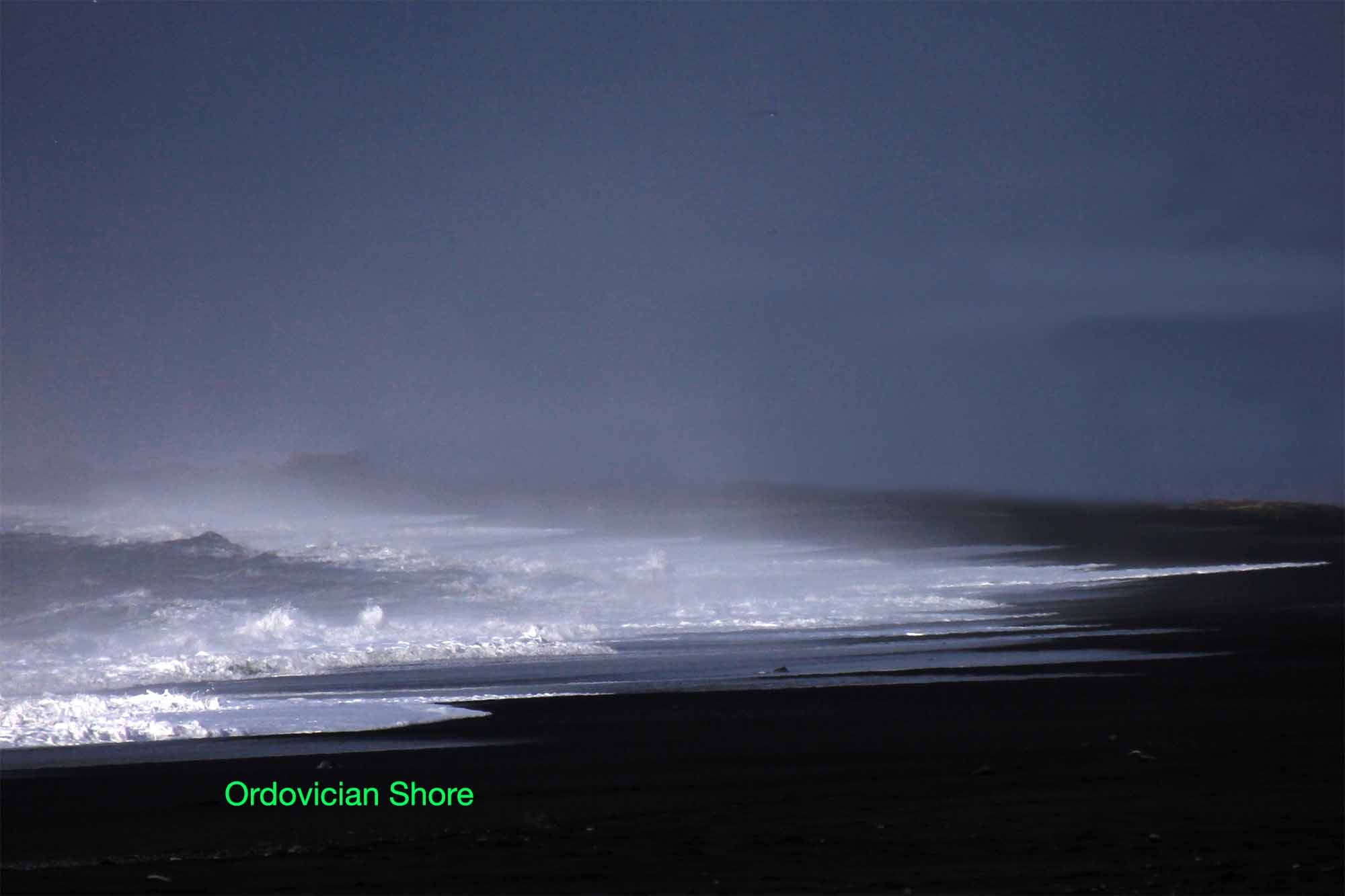 You can probably hear the sound of waves breaking on a beach (unless you have the volume of your device turned down). This is one of soundscapes that aim to capture how this place may have sounded in deep time. As you move over different rocks, the sound will change to match the environment that we believe existed when that rock formed. The soundscape for the Lickey Quartzite (rock forming the main ridge), has no human created sounds, because we were not around 480 million years ago! But what about any animal sounds, for example, sea birds? The answer to that can be found in the information you can access by touching the clock (in the app), then swipe the gauges to the left to reveal the information on life during deep time.

If you would prefer not to have these background soundscapes, you may turn them off, without muting other sounds, using the switch ‘background audio’ in the HELP section. If you switch them back on again, you will hear the sounds again once you either touch another rock on the map, or walk over another rock type. The answer to the lack of any bird sounds, e.g. seagulls, is that no birds existed on the Earth until hundreds of millions of years after the time the Lickey Quartzite formed.

Use the app to find the type of rock beneath you now and its approximate age. Is it? 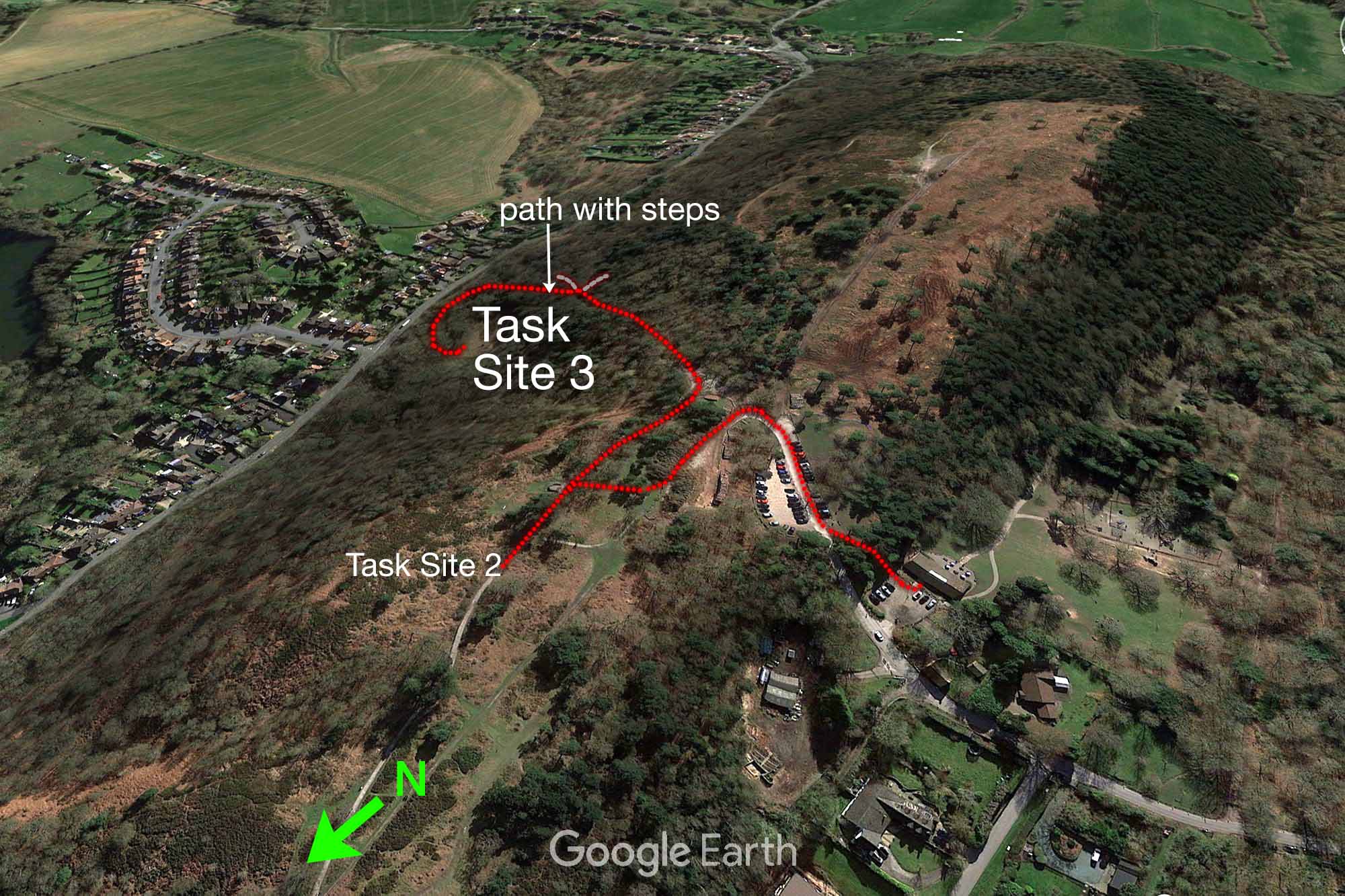 After answering the Task 2 question, follow the Voyager trail to Task Site 3 in the Barnt Green Road Quarry. This is a big quarry cut in the side of the Lickey Hills where we can see the rock that they are made of. It is well worth a visit, but it is located at the bottom of the hill, with a climb back up, so if you just want a walk along the ridge, read the illustrated information about Barnt Green Road Quarry and answer the questions for it while you are here. If you are walking down to the quarry, be sure not to miss the left turn off the main path, taking you down some steps to the bottom of the hill. The following photos show the route to the quarry and the nature of the path. 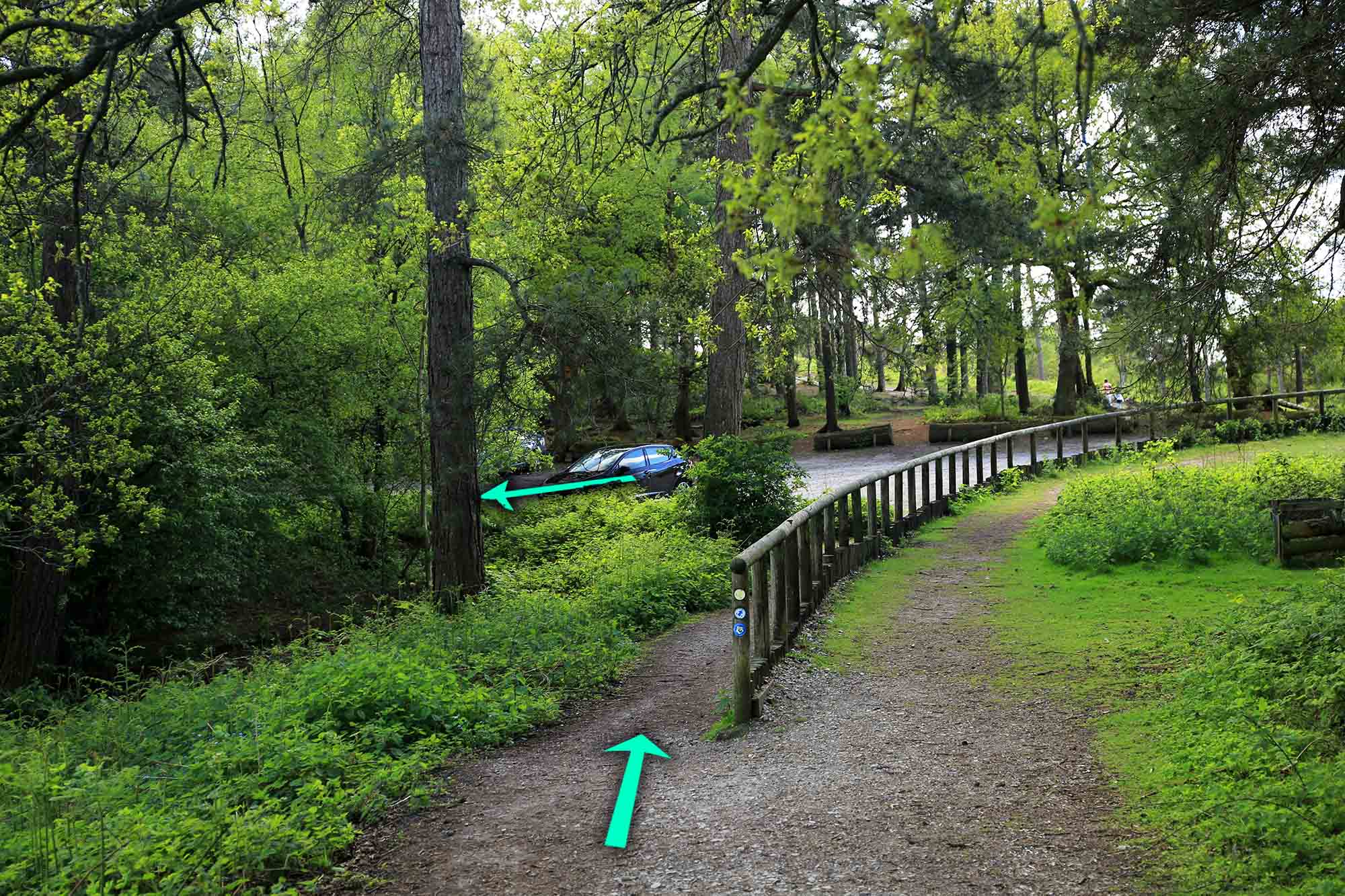 Walk southwards along the level path into the parking area, then turn to your left taking the path down through the woods. 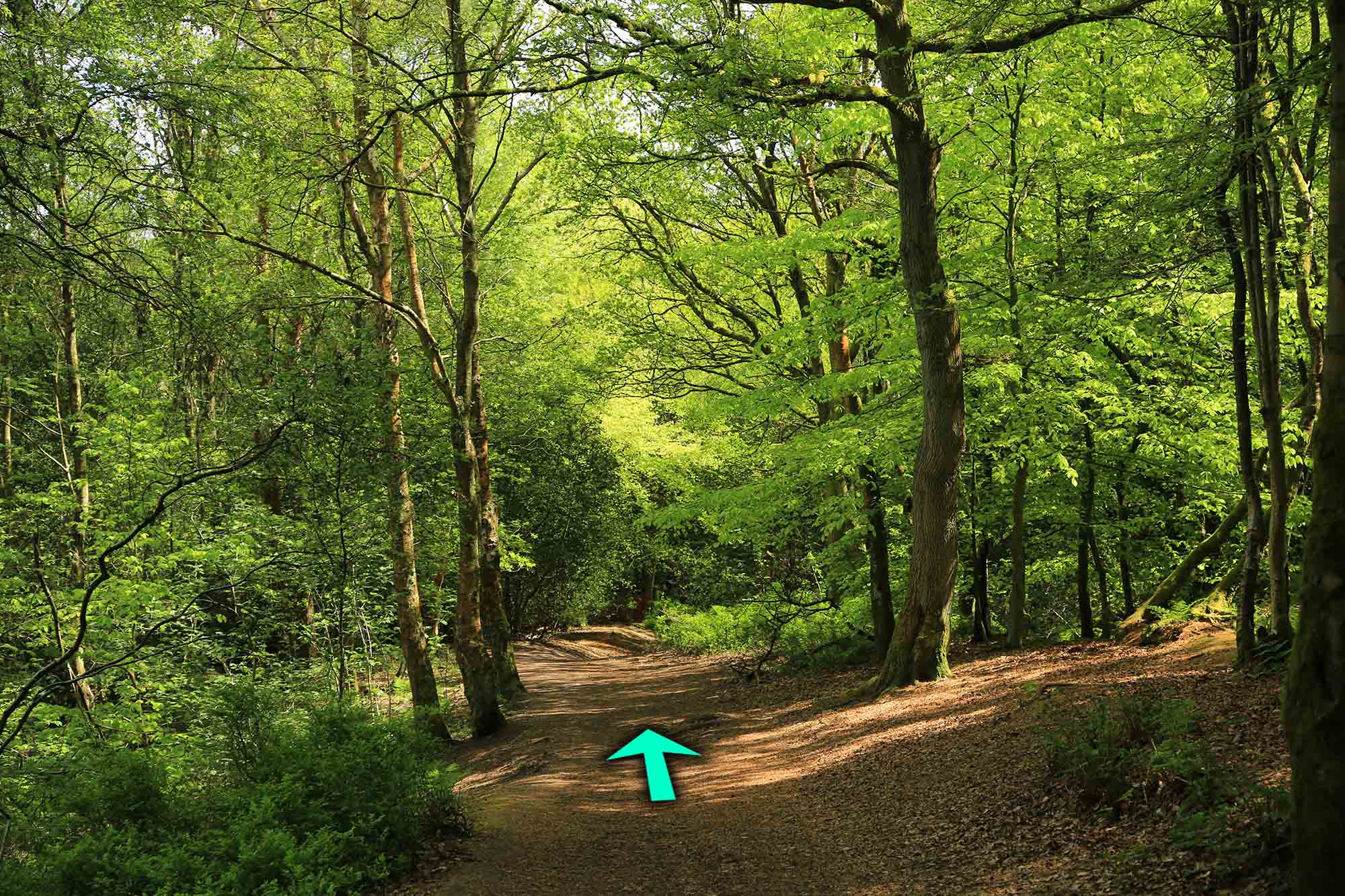 Down through the woods

As you follow the path through the woods keep a lookout for the path with STEPS branching to your left. The app may issue ‘Enter Task Site’ as you walk down here. Ignore this. It is triggering because the path here runs close to the top of the quarry, which you should not approach. 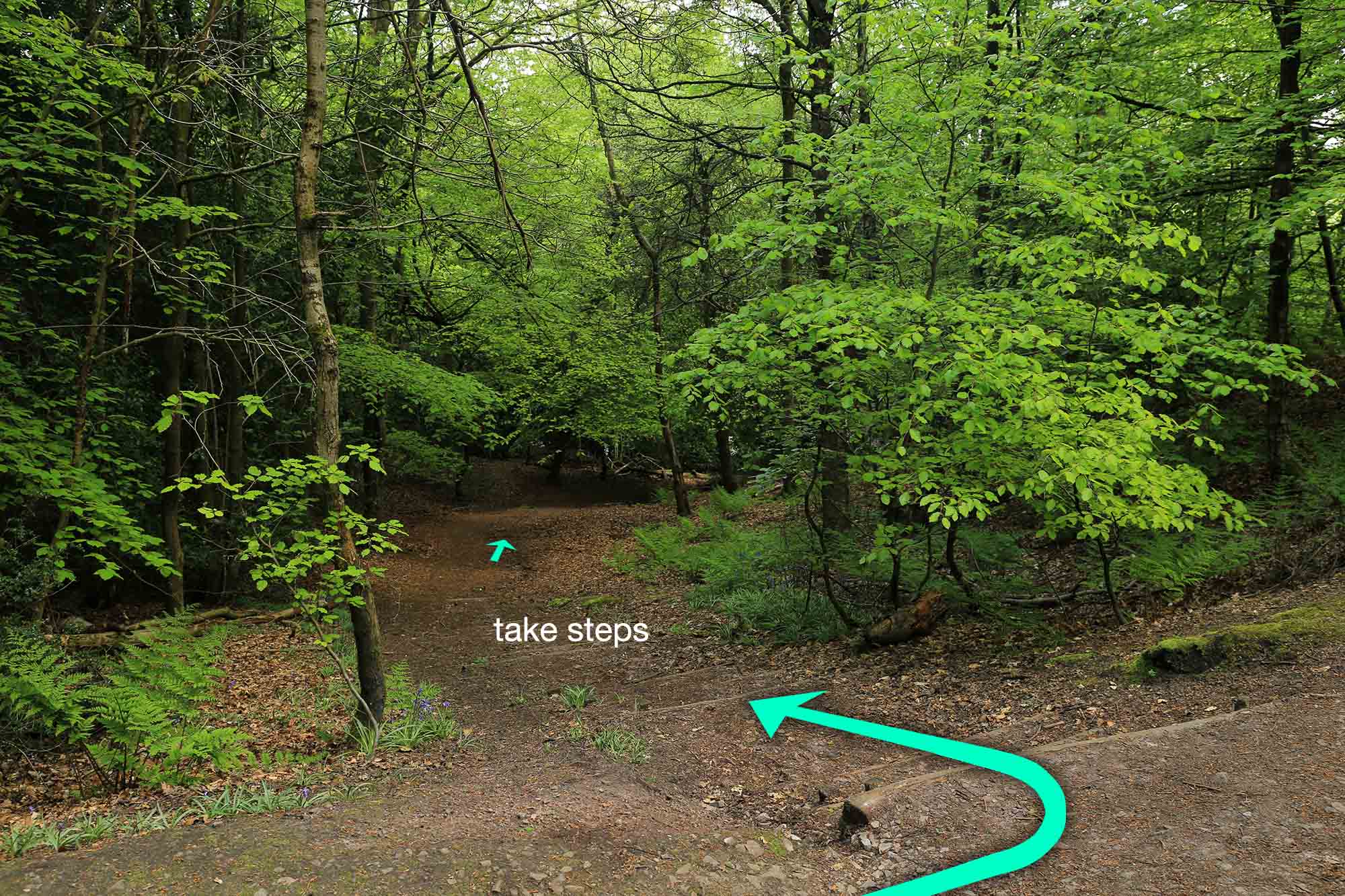 Turn onto this path with steps. The path leads you down towards Barnt Green Road. 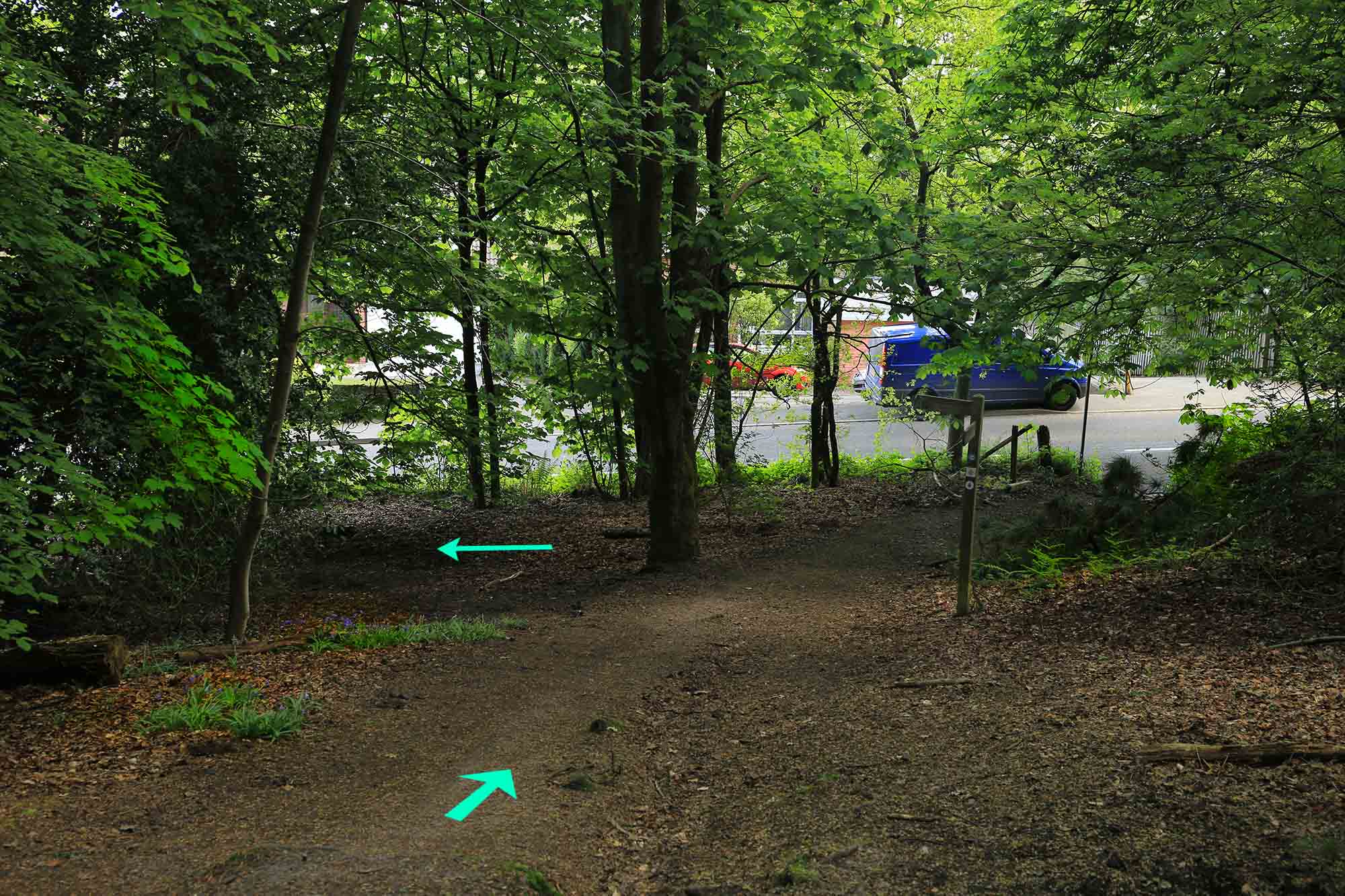 Turn left at bottom of path

Just before you reach Barnt Green Road, turn left onto a rough path that runs parallel to the road. 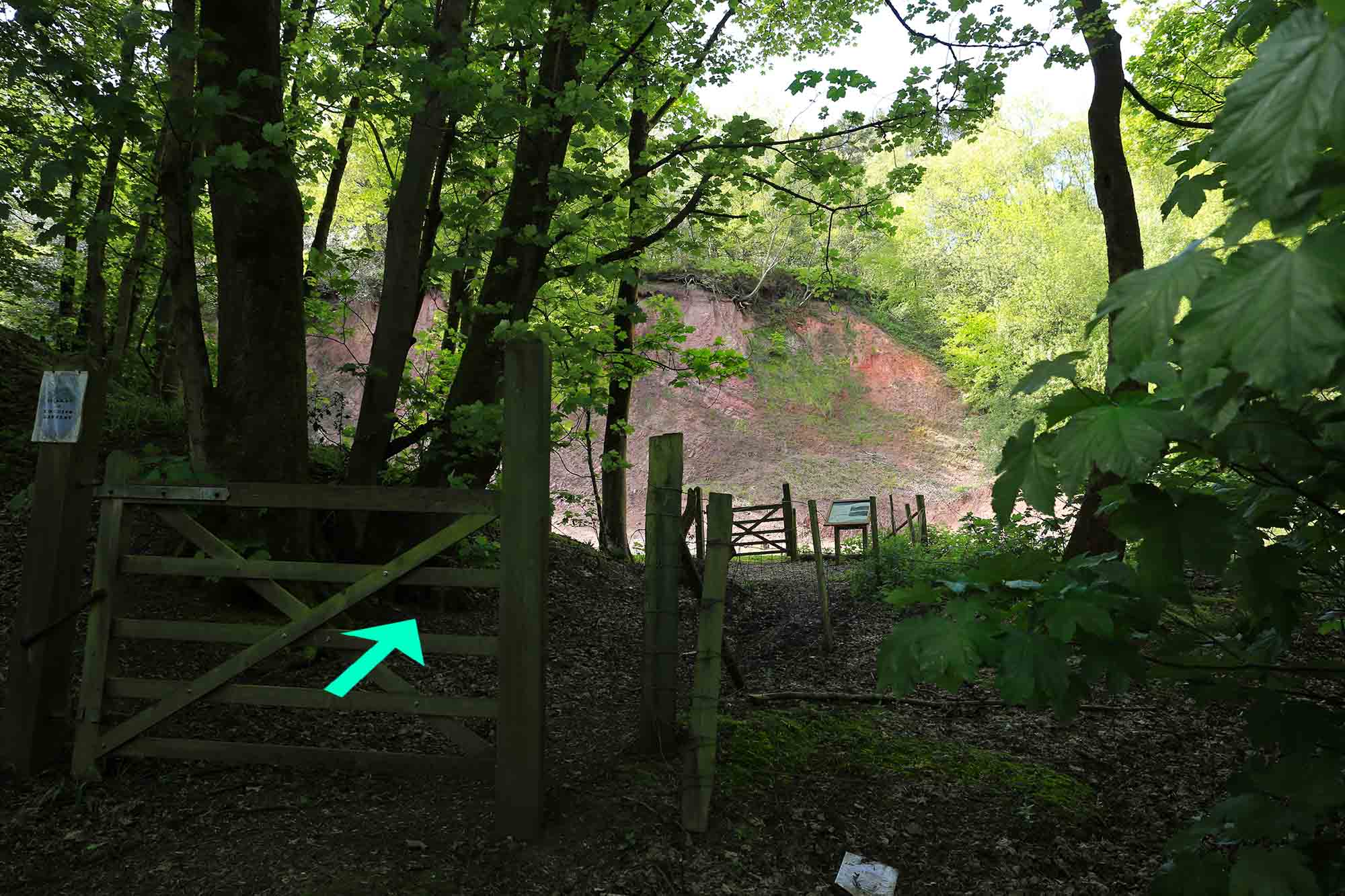 Entrance to the quarry

The path will lead you around to the entrance to the quarry – Task Site 3 location.