7 Beacon Hill
Back to map 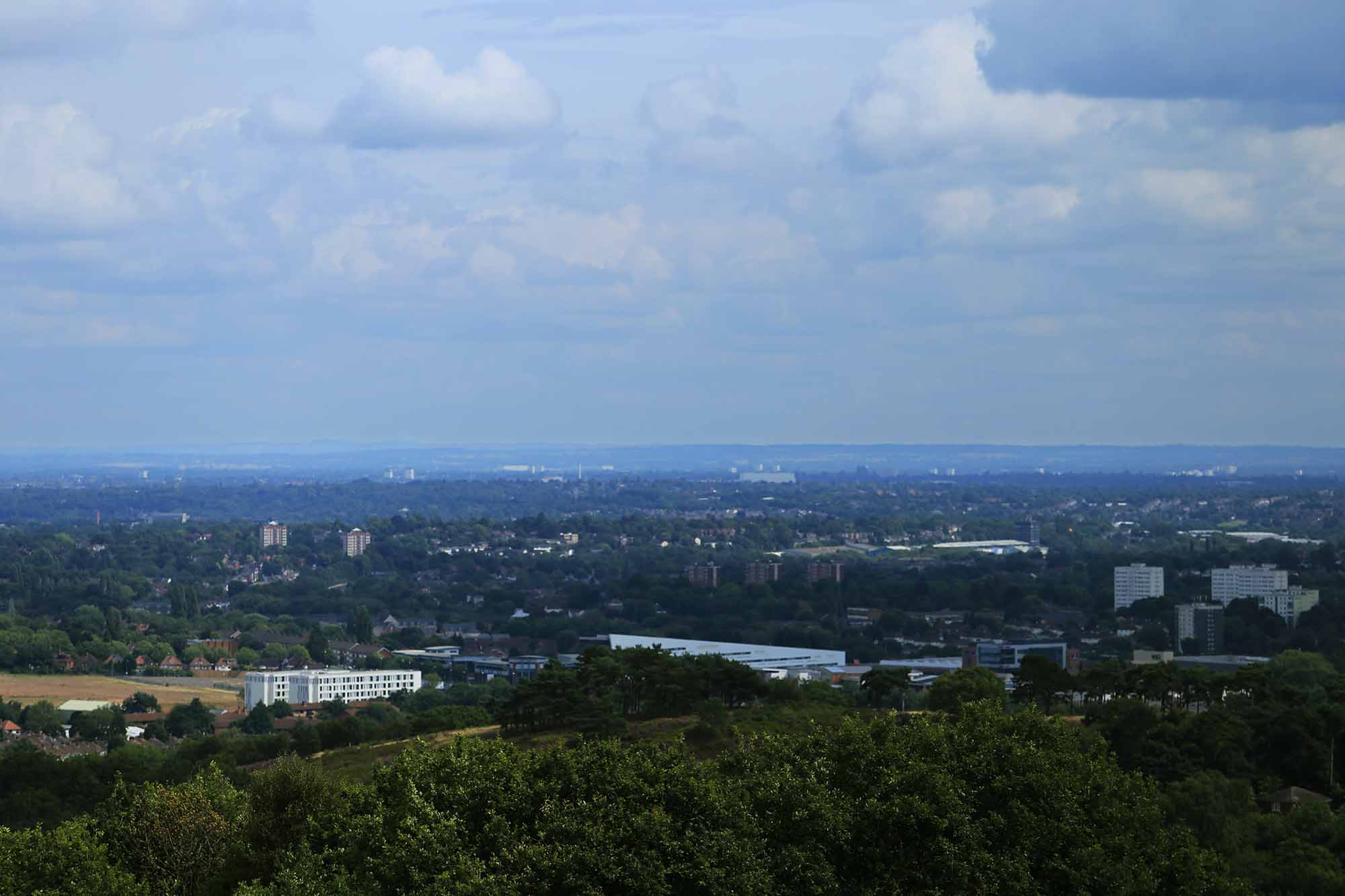 On a clear day there are wonderful views from the top of Beacon Hill. If you go to the toposcope up the steps in the little fortress on the hill top, it shows you all the places around about. The view shown here is towards the NW with the hills of Shropshire just visible on the horizon to the left of the photograph.

Below the toposcope on the summit of Beacon Hill. 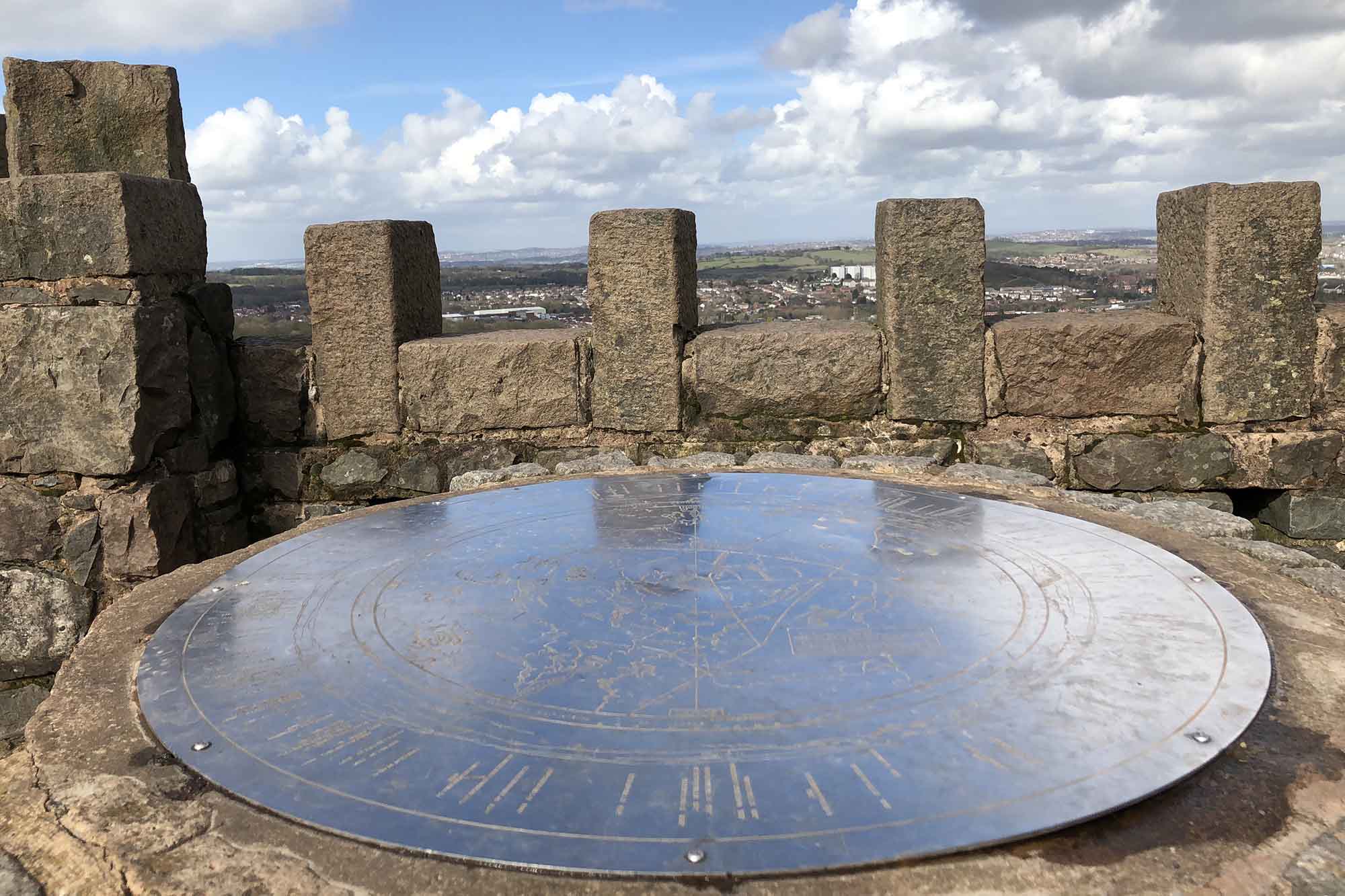 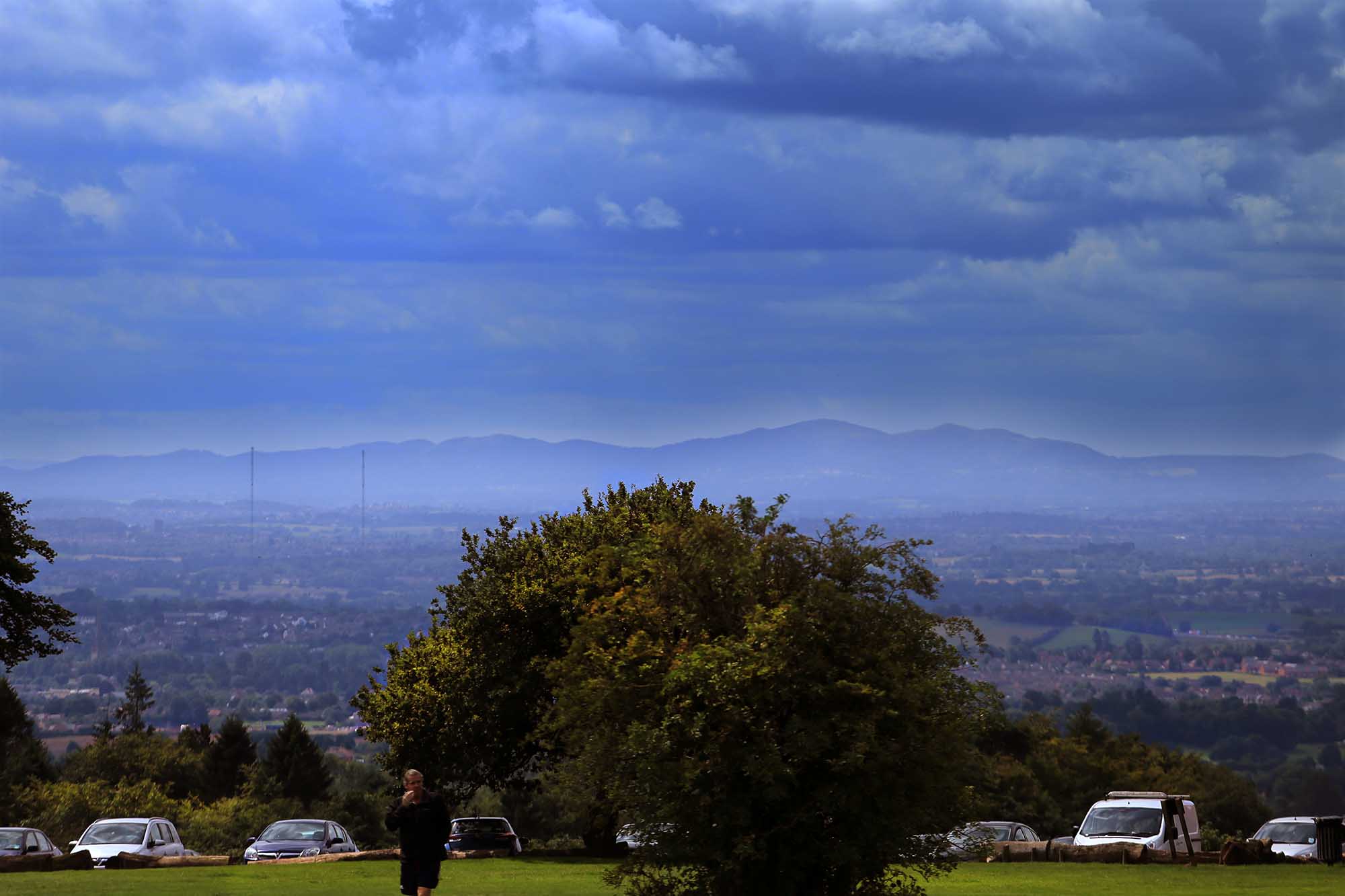 Malvern Hills on the horizon. The Malvern Hills are largely formed of very hard Precambrian rocks, with an age of around 680 million years. Some of the rocks that form the hills of today are folded or faulted upwards, but the main reason that they are still hills now is that they are harder than the rocks in the low ground between them. They resisted erosion even when the glaciers during the last Ice Age and big meltwater rivers cut through this area. 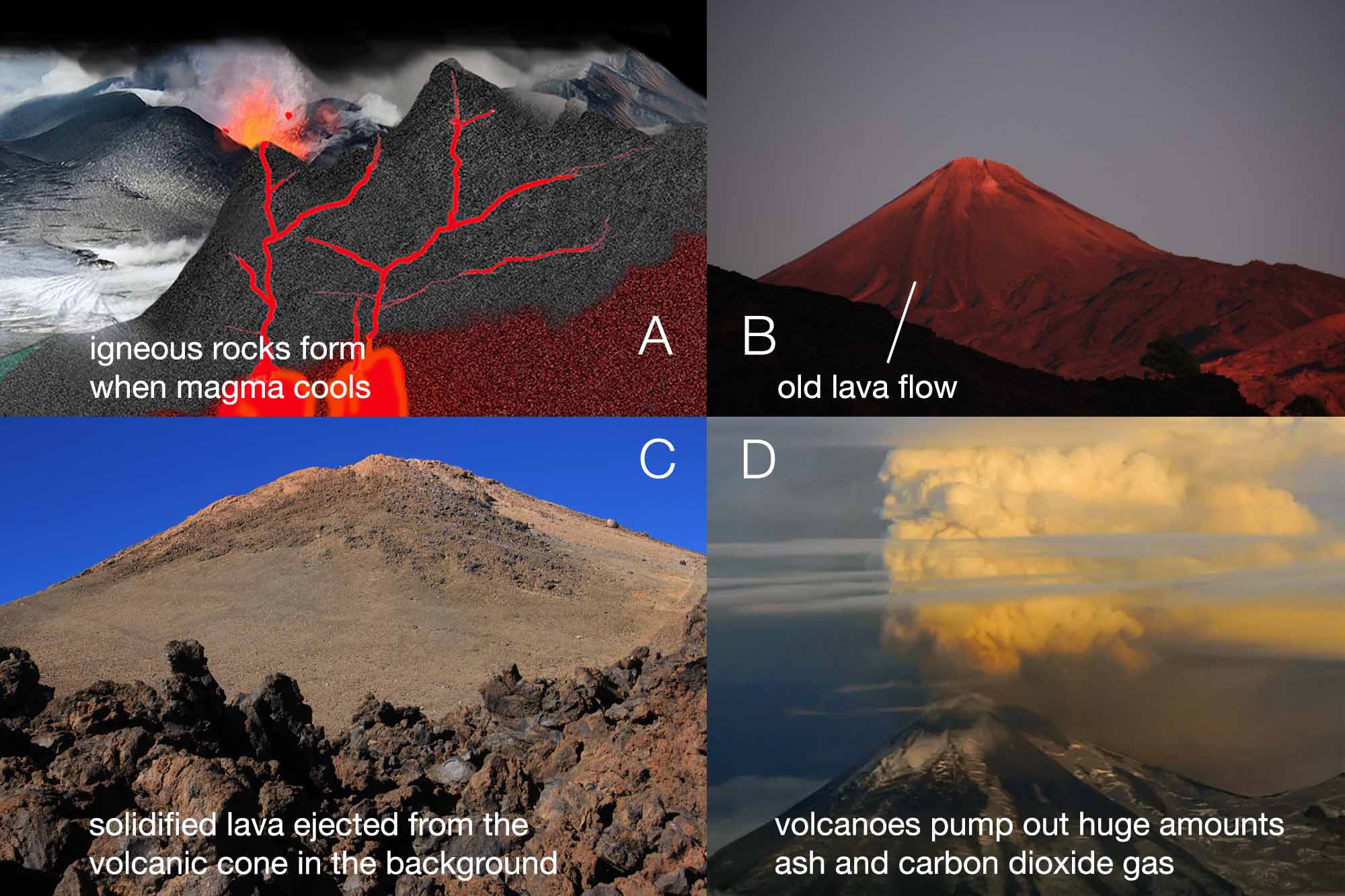 The oldest rocks from the Precambrian, that form the Malvern, Charnwood and some of the Shropshire hills also happen to be some of the hardest. This is because they formed in and around ancient volcanoes and the igneous and volcanic material they are made of is very hard indeed.
A Much of the molten rock (magma) associated with volcanoes eventually turns into solid (igneous) rock beneath ground.\
B Volcano cone with old lava flow.
C Wall of solidified lava that was ejected from the volcano cone behind.
D Volcanoes can eject huge amounts of ash and carbon dioxide gas. 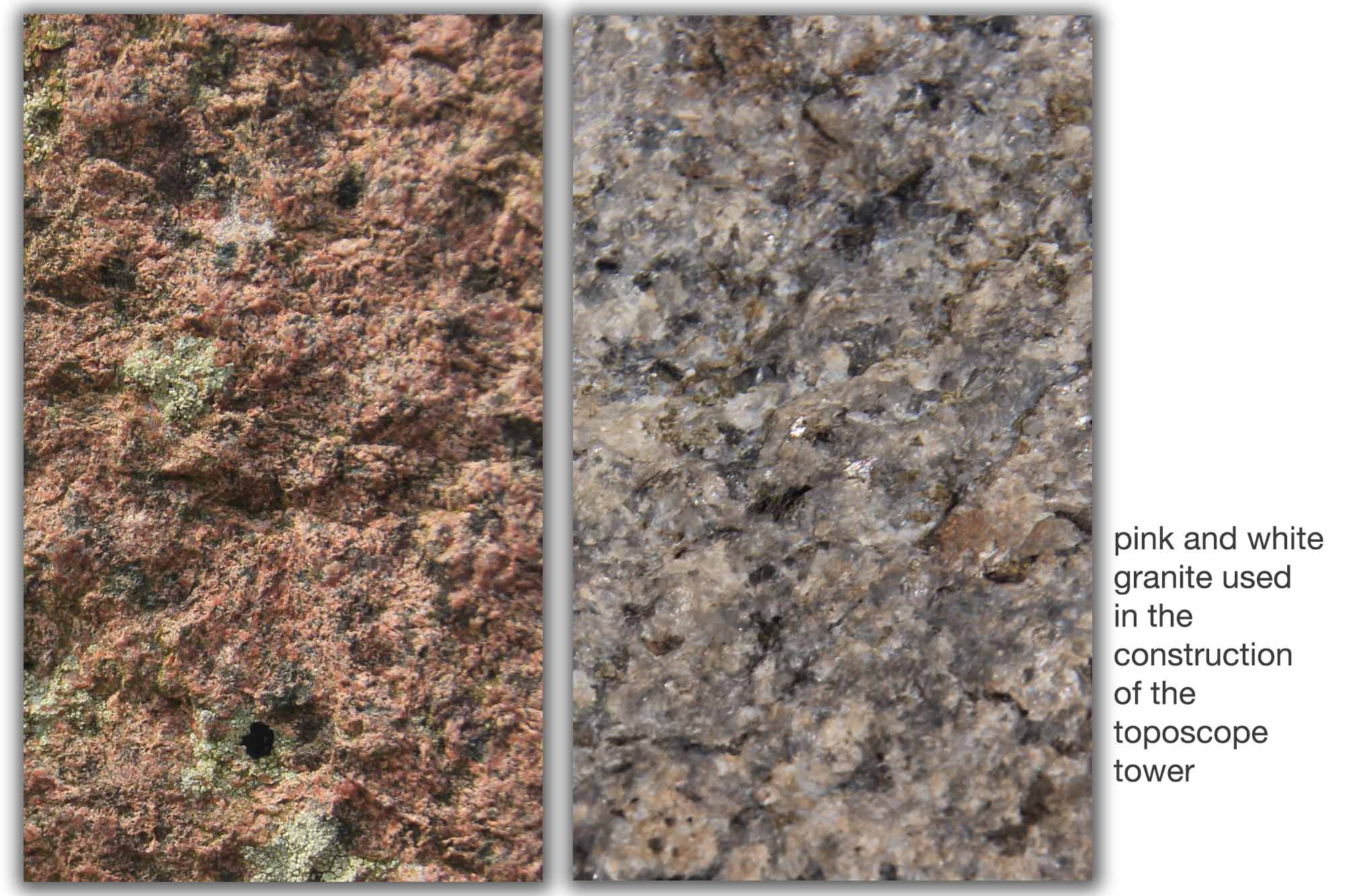 Igneous rocks in the tower

Blocks of these the two igneous rocks are used in the construction of the toposcope tower. Both are types of granite, the pink one is probably from Scotland and the grey one is probably from Cornwall. Granite forms as a certain kind of magma rises within the Earth’s crust and cools as it nears the surface. The more slowly it cools, the bigger the crystals that will form. Which of the two granites here do you think cooled quickest? 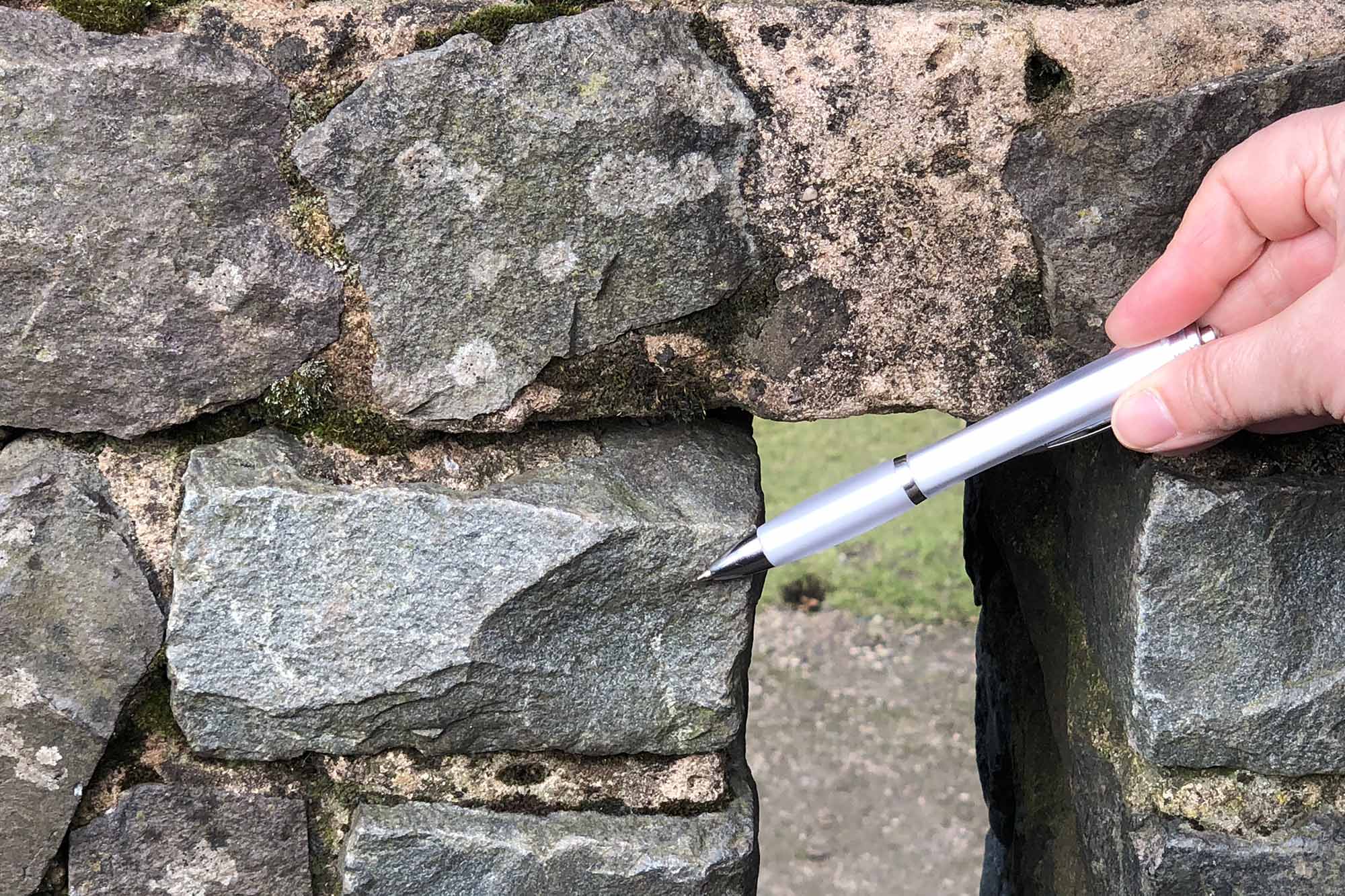 There is one local igneous rock in the tower – a plain, mid-grey stone used for the walls of the battlements. This is called Rowley Rag and it was quarried near the village of Rowley Regis to the north of here (see photo below). Rowley Rag is igneous rock that formed in Carboniferous times.

Rowley Rag is composed of igneous rocks called basalts and dolerites. They were intruded in a hot (>1000°C) molten state into strata of the Coal Measures late in the Carboniferous period, during the time when the Variscan Mountains (those that were south of the Permian desert) were forming. The magmas slowly cooled at depth and formed the hard crystalline rock that is today called the ‘Rowley Rag’. As the molten mass cooled and solidified it contracted and formed cracks, creating huge columns of rock. You can still see these today at the Rowley Hills. 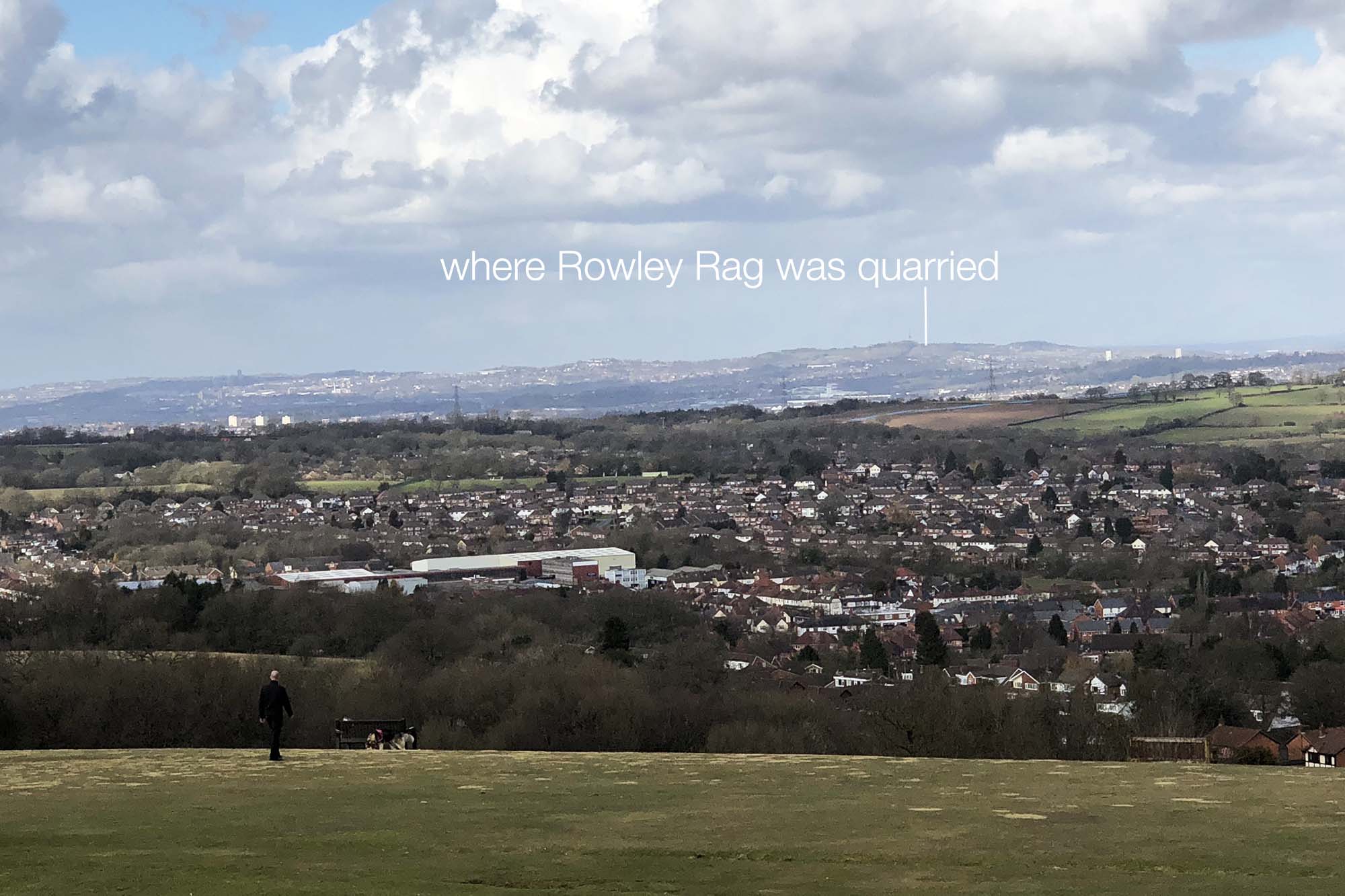 These igneous rocks are strong because they are made of: