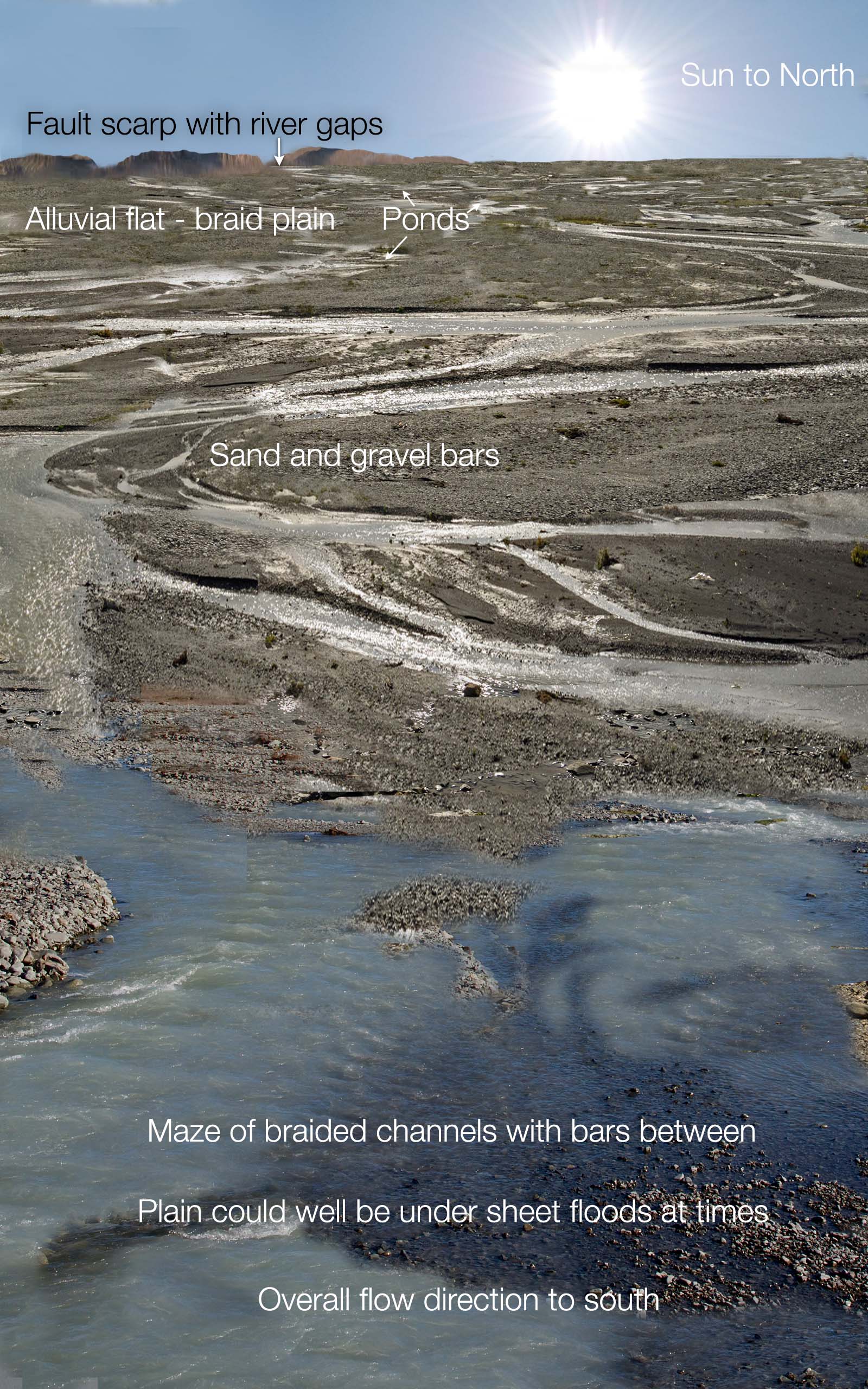 Reconstruction of the environment in the Voyage area around 365 million years ago (late-Devonian) when the Quartz Conglomerate was being deposited. The orientation of this view is northward (in Devonian times this was actually to the NW due to plate rotation). The Sun shines in the northern sky as this part of the crust was to the south of the equator at this time.

At the time the Quartz Conglomerate was being deposited, this area is believed to have been a lowland situated between two upland areas, one to the east (see below) the other to the west. The edge of the western uplands is indicated by the escarpment (left side of picture) with gaps where rivers have cut down. The feature is termed a ‘fault scarp’ as it would probably coincide with the line of a fault system, the ‘Vale of Neath Disturbance’. This fault system can be traced from the Swansea area in South Wales to the Hereford area. In terms of present day locations the Devonian fault scarp would have been positioned about 5 miles north of Abergavenny running in an ENE – WSW direction.

By measuring the angle of cross-bedding in sedimentary rocks it is possible to determine the palaeocurrent direction – the general direction of flow of the current which deposited the sediment. In this case (around 365 million years ago) the flow in what today is the Abergavenny area was towards the SE, from upland sources in the NW. In the Wye Valley and Forest of Dean areaa it was towards the S from sources to the N. The sediments carried by these two sets of rives would merge in this area.

Below an eastward view, which emphasises the fault scarp that possibly existed at that time along the line of the East Malvern Fault. At that time the land to the east (i.e. the Severn Valley of today) was higher than the ground to the west – the opposite of today’s arrangement..

The upward displacement of crust to the east of the Malvern line resulted from the compressive forces from the thrust of Iberia and other pieces of the future southern Europe against the southern edge of Laurussian plate, where the British isles was located (he Acadian Orogeny), This is illustrated in the bottom schematic of plate arrangements around 380 million years ago.

The Quartz Conglomerate (‘Pudding Stone’ is the colloquial name in the Forest of Dean) has now been renamed Huntsham Hill Conglomerate by the British Geological Survey. Huntsham Hill lies to the north of the Voyage  (Little Doward) area and provides large impressive exposures of this conglomerate. 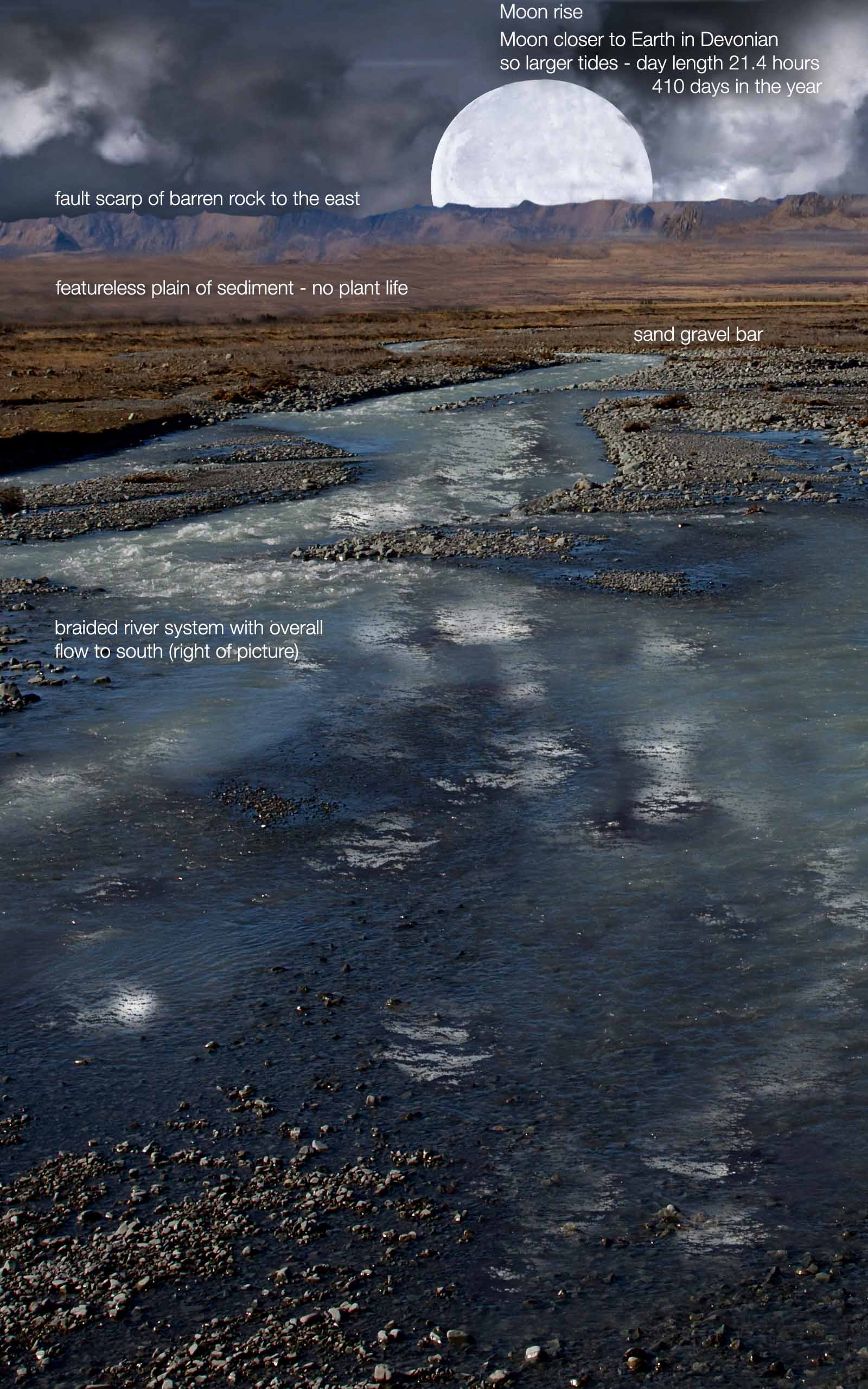 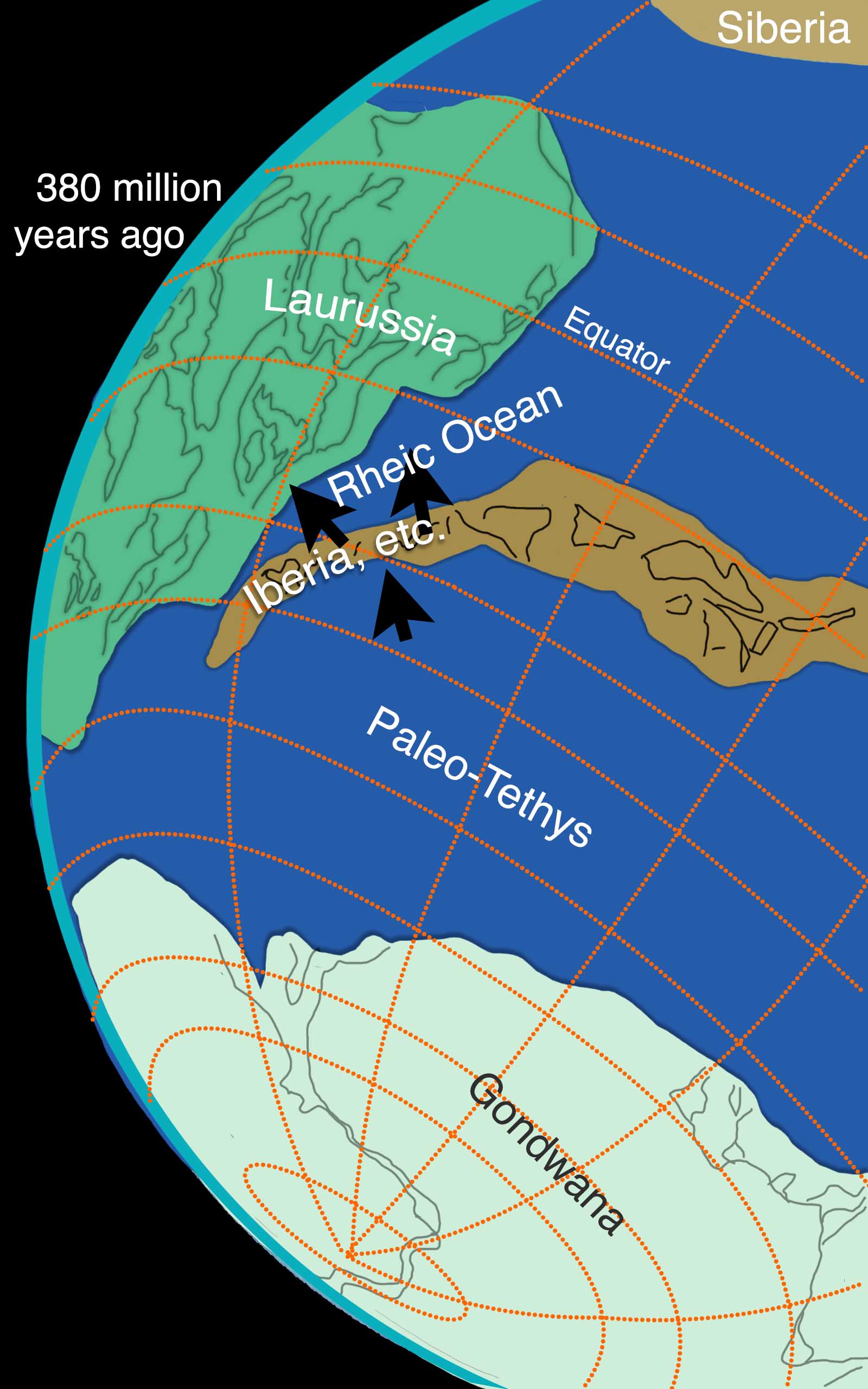