4  Senni Formation
Back to map 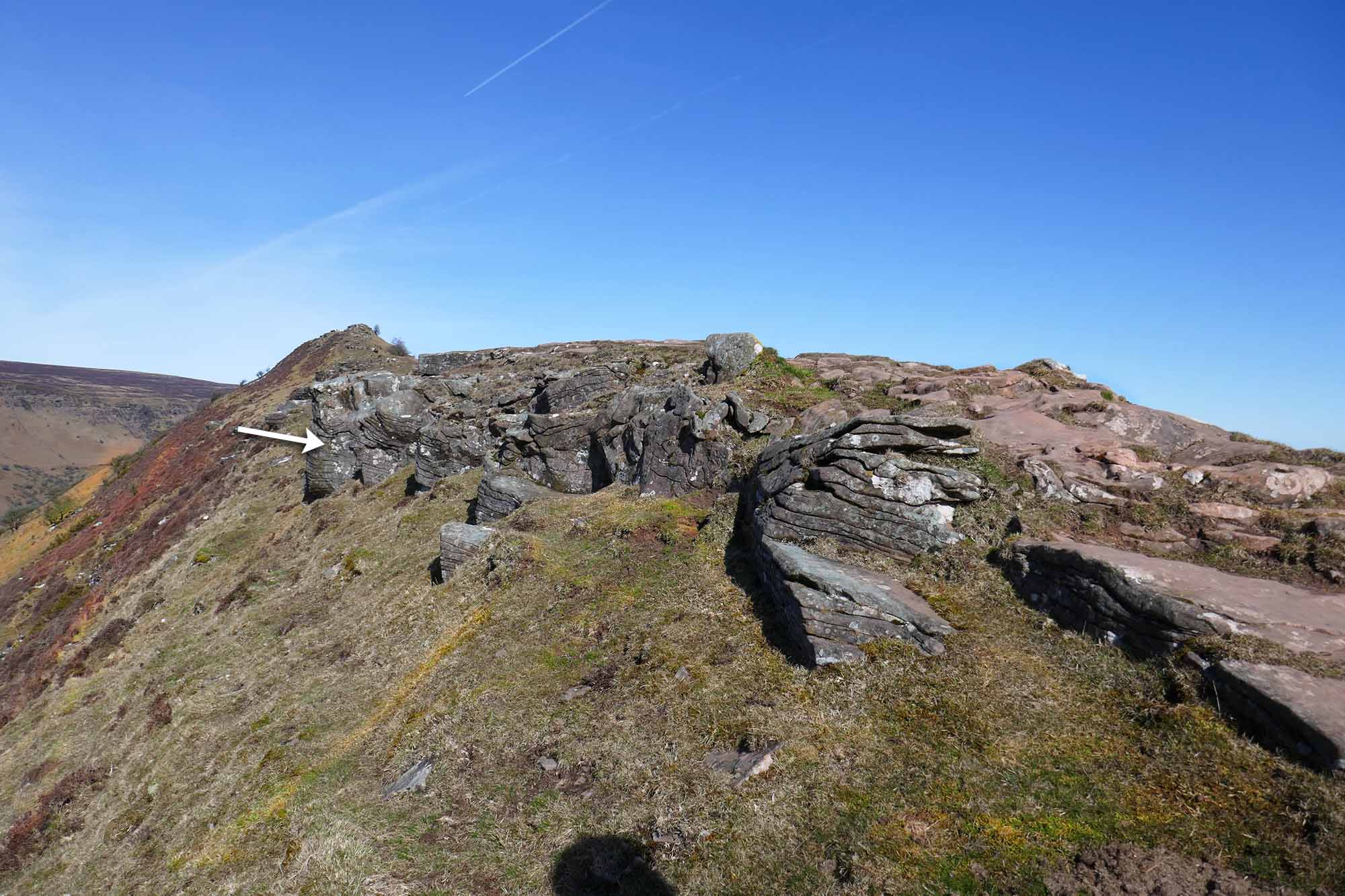 The area of Task Site 4. You may notice some strange curly shapes on the rocks in front of you. We look into those in a moment. The white arrow on the picture shows the best location to see these, but do take care on the steep slope! 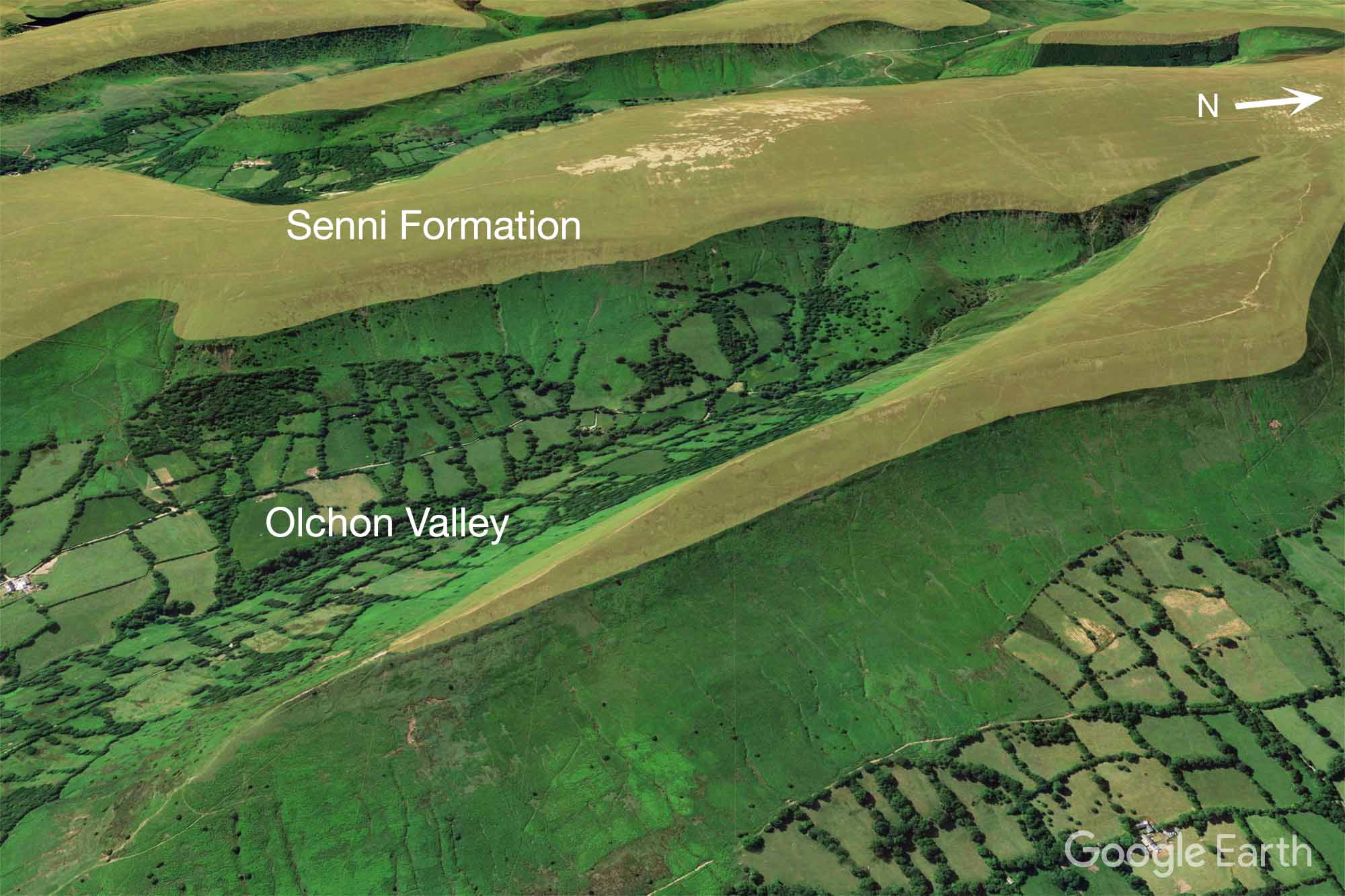 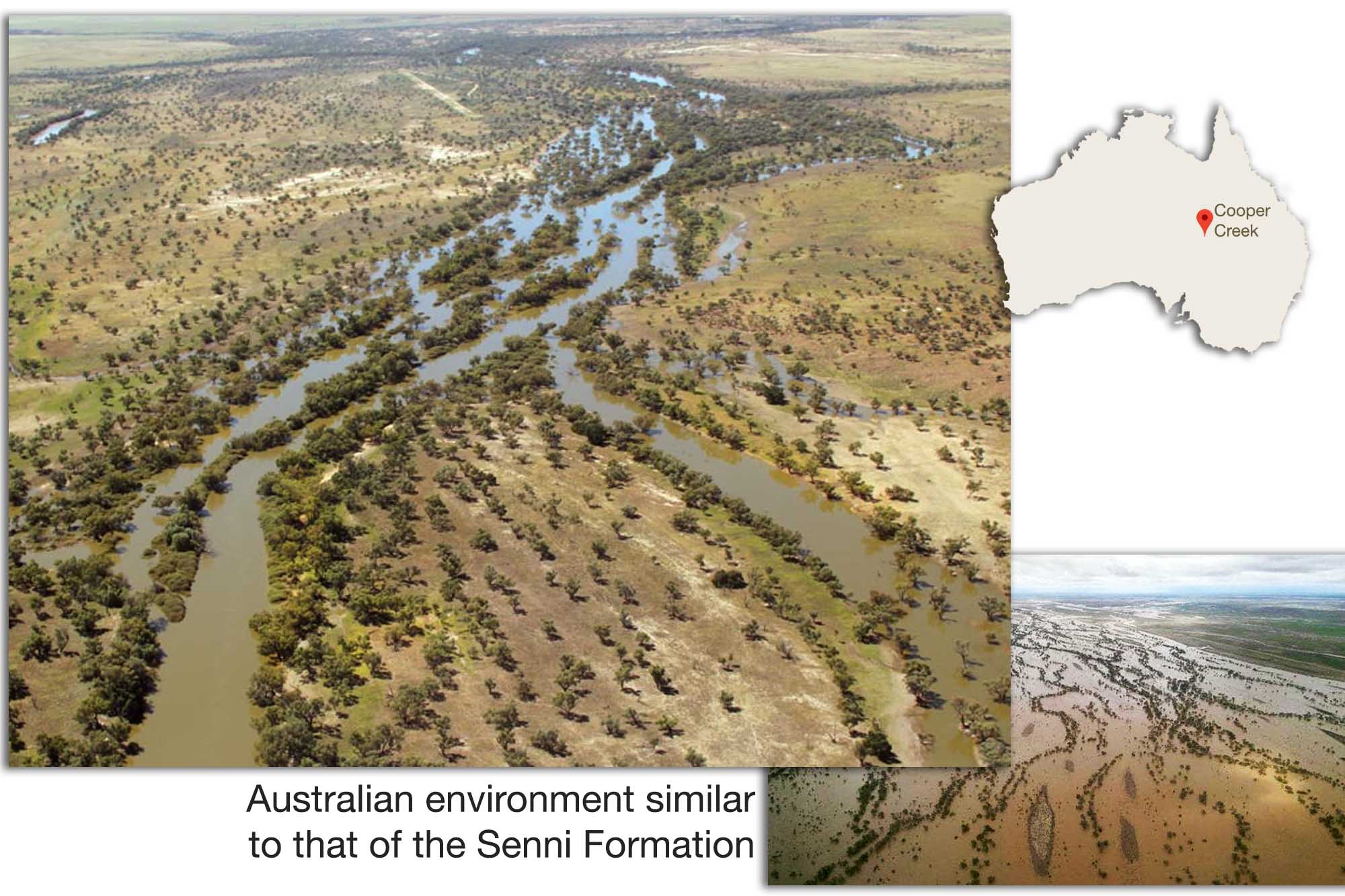 At the time when these rocks formed, tectonic plate activity was starting to cause the hills of mid Wales to be uplifted again, re-energising the river systems. The flood plain where sinuous rivers had meandered seaward when the Freshwater West beds were laid down, was now inundated by faster, sand-carrying river channels of low sinuosity. The picture shows a similar setting in Australia today.

It is thought that these rivers flowed seasonally, subject to a wet-dry climate which still allowed calcretes to form occasionally. With the land rising to the north, this location was now higher up the river profile – no longer on the coastal plain, but not quite in the foothills either. 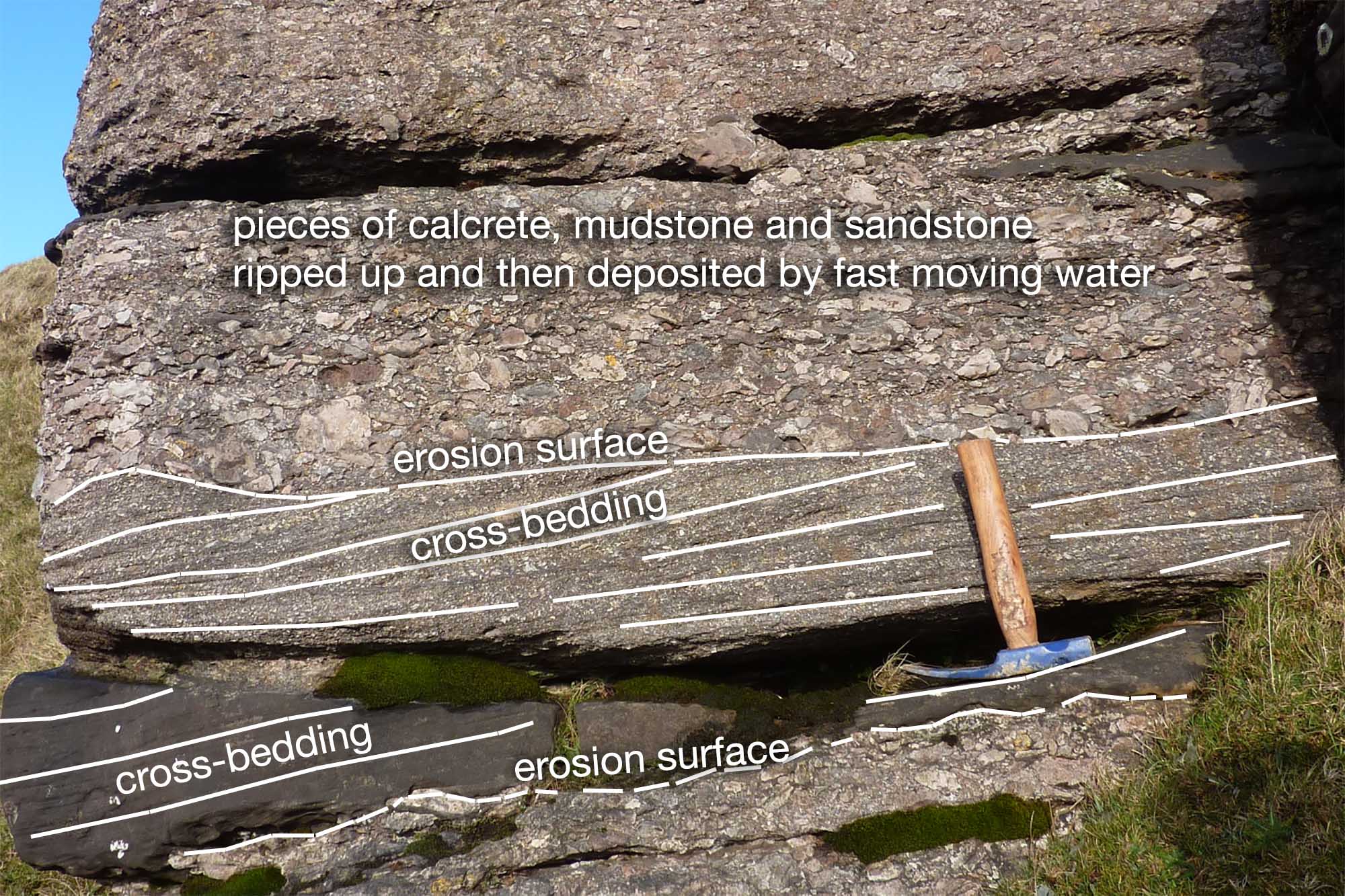 The Senni Formation sandstones show features typical of vigorous river channels, which you can see if you step down a few metres westwards from Cat’s Back ridge here – but take care if you do this, as the ridge sides are steep. This picture shows inclined layers in the sandstone, known as cross-bedding. 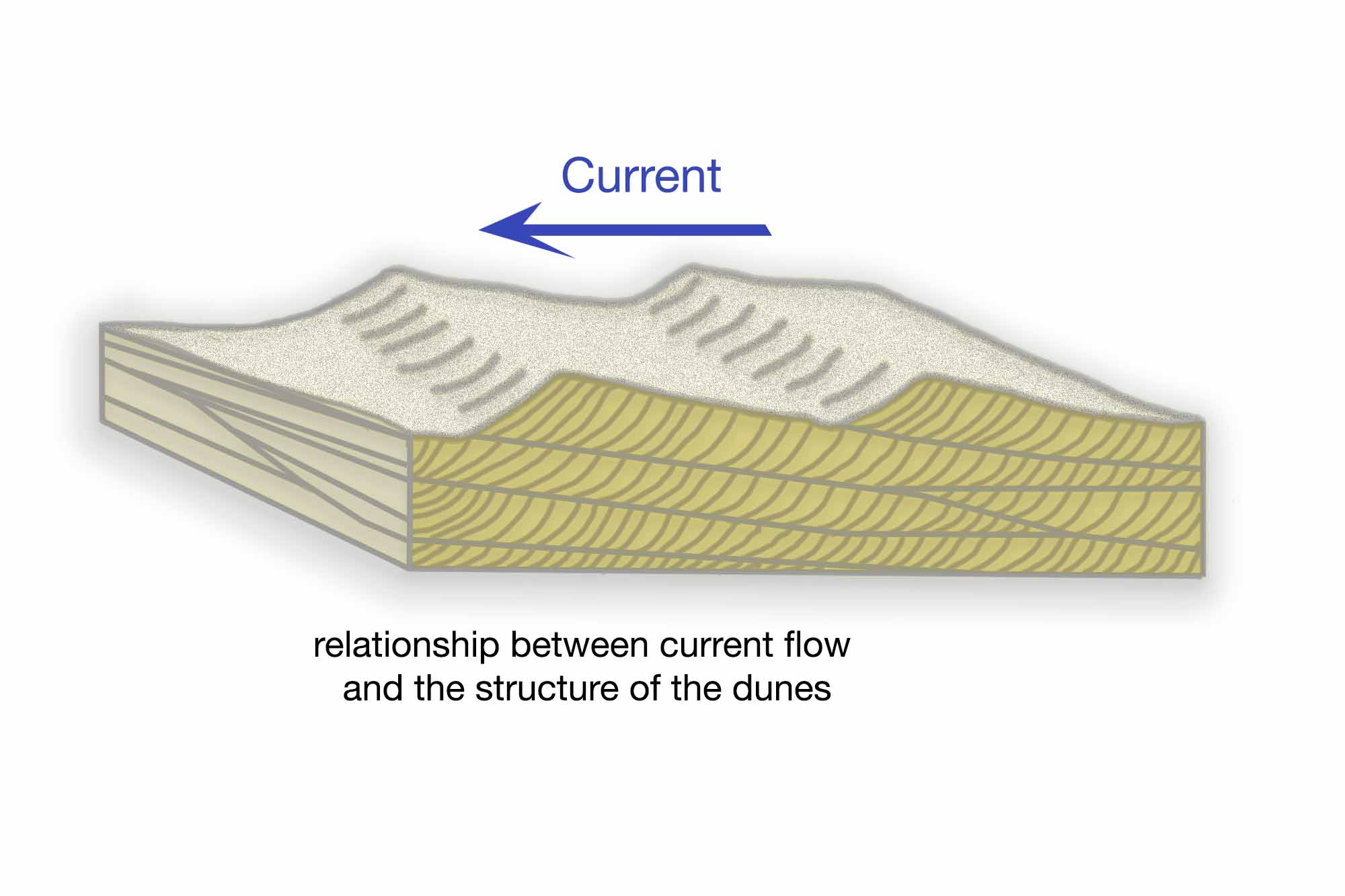 As water currents flow across sandy river beds, small dunes form and then are moved steadily forward. The water moves the sand up the dune until it reaches the top and then the sand grains avalanche down the other side in a sheet of sediment; this slopes downward in the same direction as the current. The sloping layers of sand are called cross-bedding.

The direction that the cross-beds slope can tell us in what direction the Devonian river water was flowing. Generally, in this area, the overall flow direction is towards the south, although the cross bedding does show that the channel direction varied locally, with some cross-beds indicating a westerly flow. 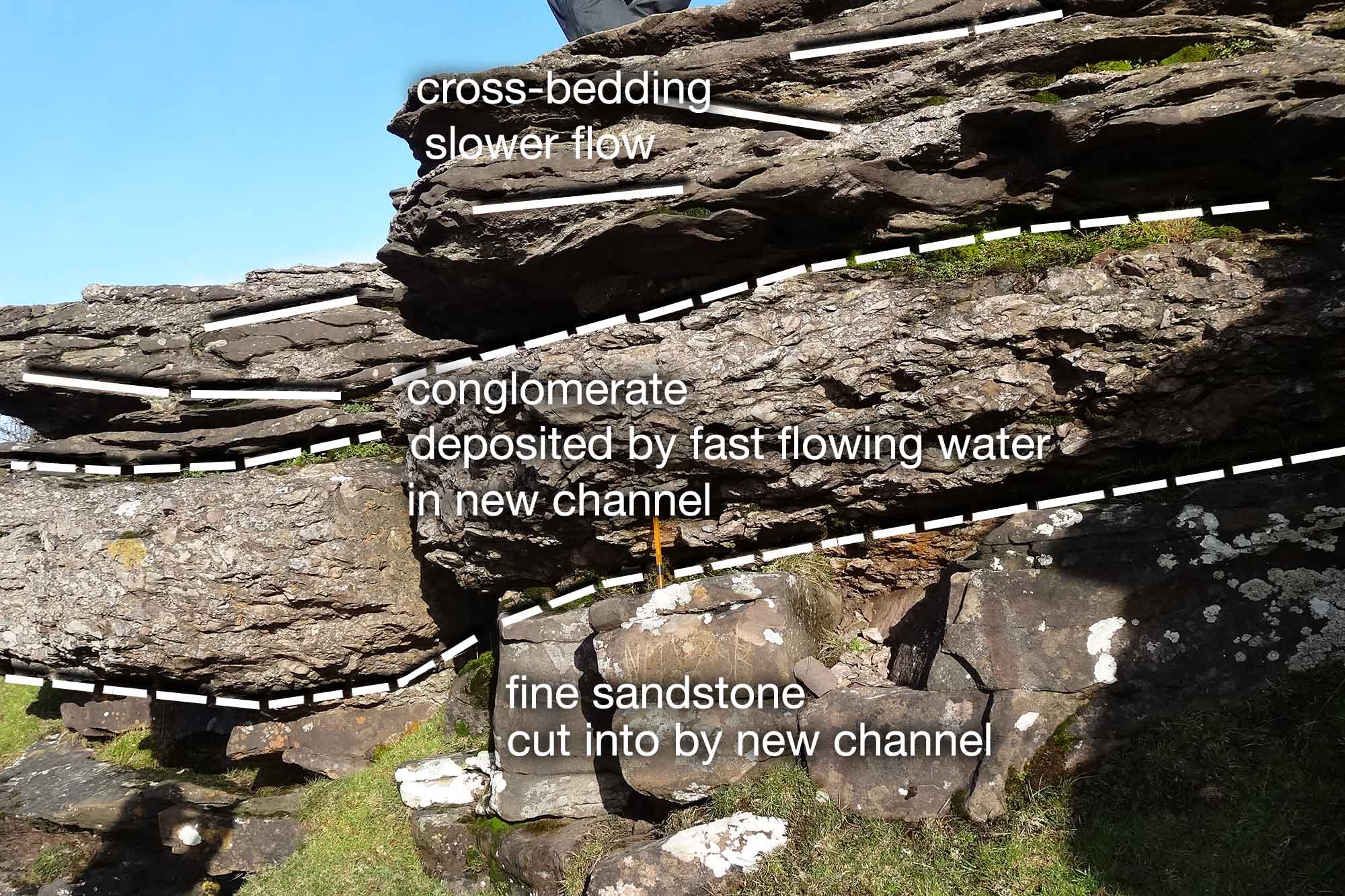 In a few rock faces here, small channels can be seen, cutting down into earlier sandstones below, as streams within the river system adjusted their course. 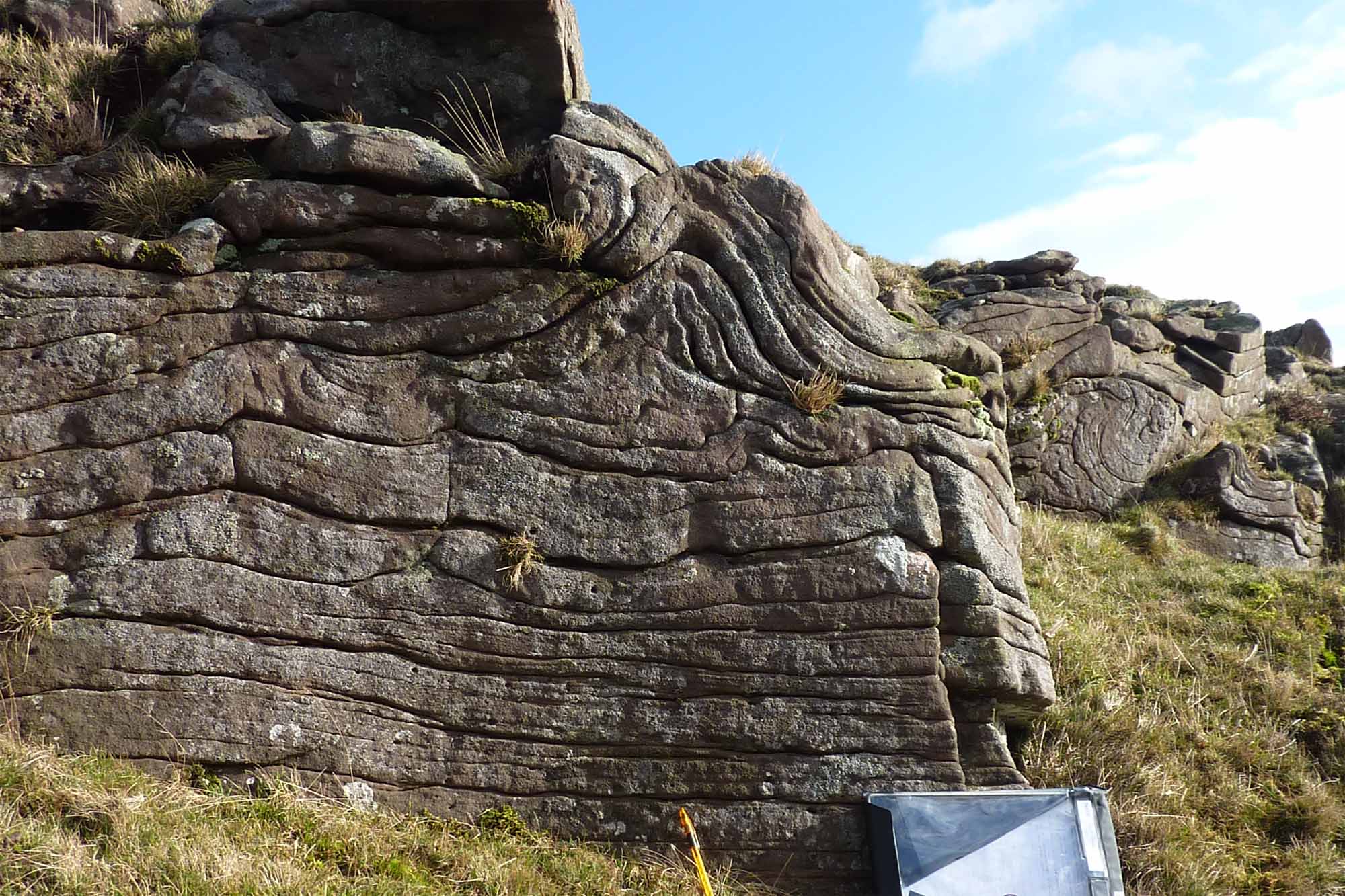 There are excellent examples of strongly deformed bedding in the Senni Formation. The picture (taken at location shown by white arrow on first picture for this sequence) shows sandstone beds that were deformed while the sediment was still wet and before it was ‘lithified’ or turned to rock.

Bedding can be deformed like this in several ways, but all happen a relatively short while after the sediment was deposited, while it is still wet and unconsolidated.

A layer of wet sand is laid down on an earlier layer or patch which contains more water than the upper layer. The lower layer is therefore less dense and rises through the upper layer as it is squeezed by the denser bed above.

‘Convolute’ bedding like this can be caused by dewatering of the sediment when subjected to seismic shock, such as if small earth tremors are triggered by movement on geological faults in the crust below.\n\n A layer of wet sand can be deformed by the overlying sediment surface being subject to frictional drag by moving sand or shearing by strong water currents. Such a process could explain the N to S orientation of the deformation seen here, as we already know that these rivers were flowing in a predominantly southerly direction. 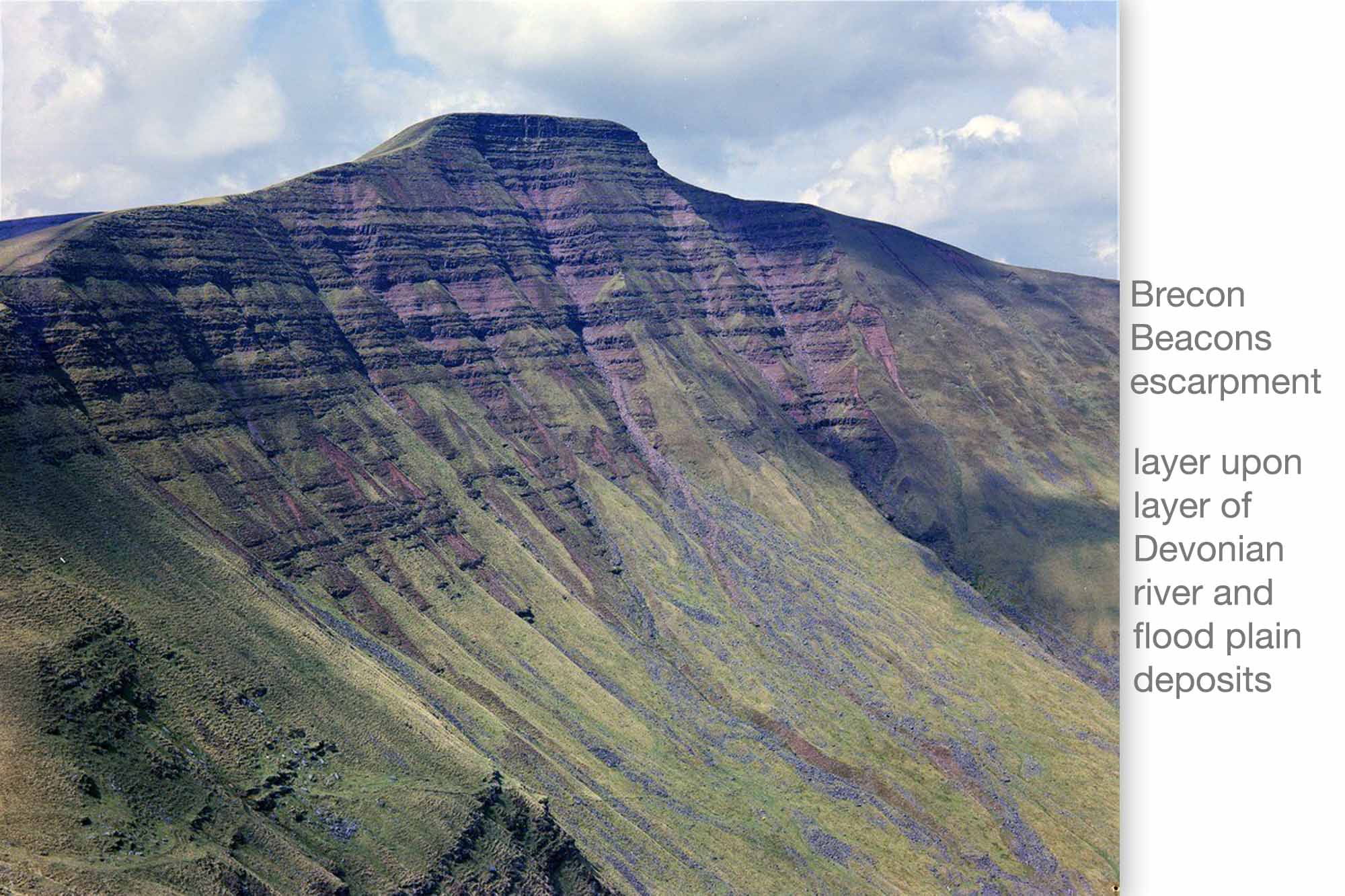 Mudstones and sandstones of the Freshwater West and Senni Formations and other river / flood plain deposits like them extend across much of Herefordshire and south Wales. Over about 50 million years around 2000m of rock beds were laid down, which together are known as the Lower Old Red Sandstone, being mostly reddish in colour. The picture shows Lower Old Red Sandstone forming the magnificent scarp face of the neighbouring Brecon Beacons.

The massive amount of debris carried from the eroding mountains to the north, was able to build up to such a great thickness as the plains were for a long time sinking as the crust ‘relaxed’ following the earlier continental collisions. This made space for sediment as it was laid down. The process continued for around 50 million years building up rock beds about 2000 m thick. These beds together are known as the Lower Old Red Sandstone, as apart from the Senni Formation, they are mostly reddish in colour. The Senni beds are often green-grey in colour. This is caused by the presence of chloritic mica, brought from the source rocks in the hills. Chlorite is a green mineral. 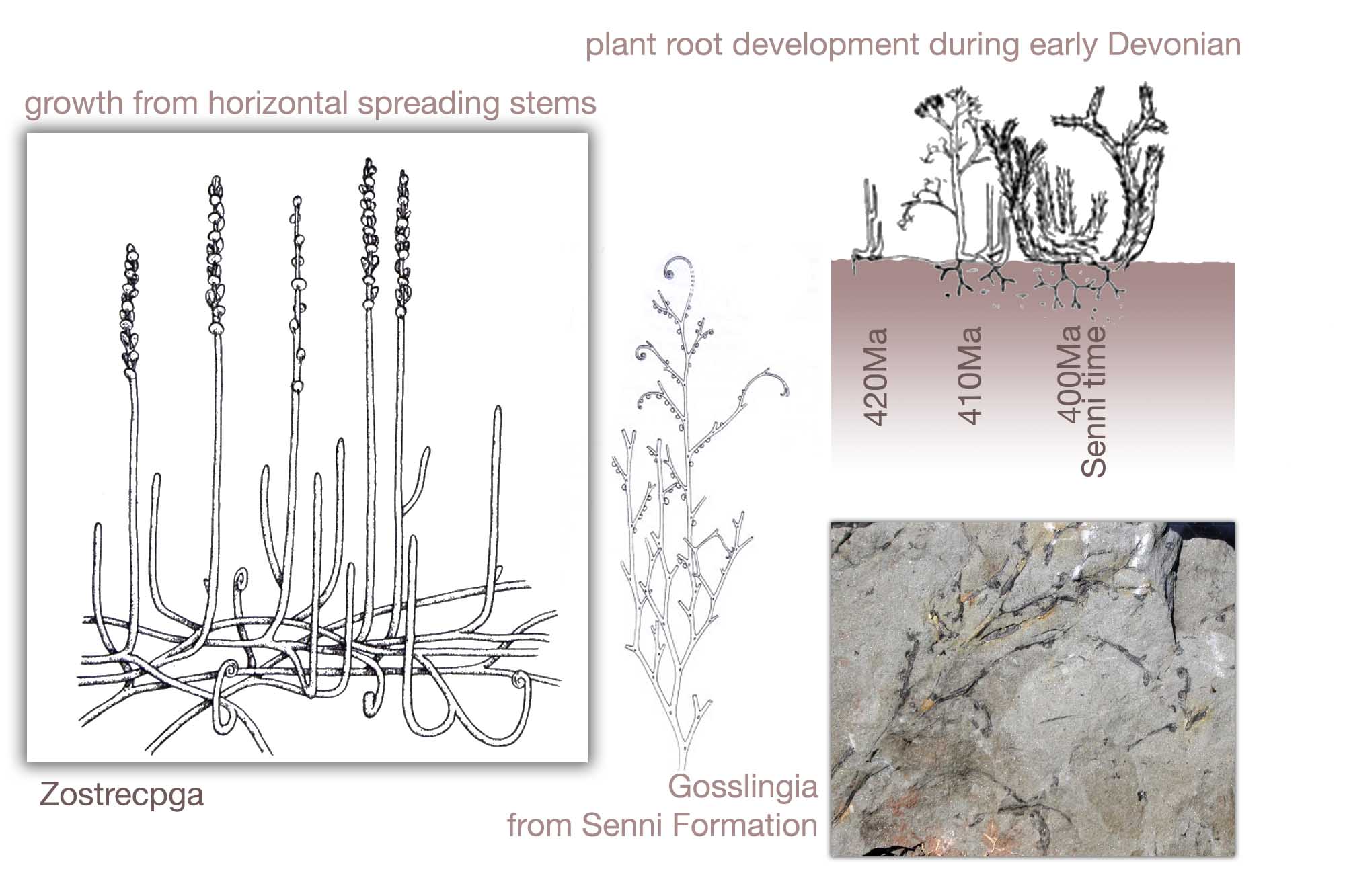 The Senni Formation is known for fossils of vascular plants and spores. It is thought that they were preserved because water tables may have been quite high at the time. This would have slowed down bacterial decay, which would have proceeded faster in more oxidised conditions. 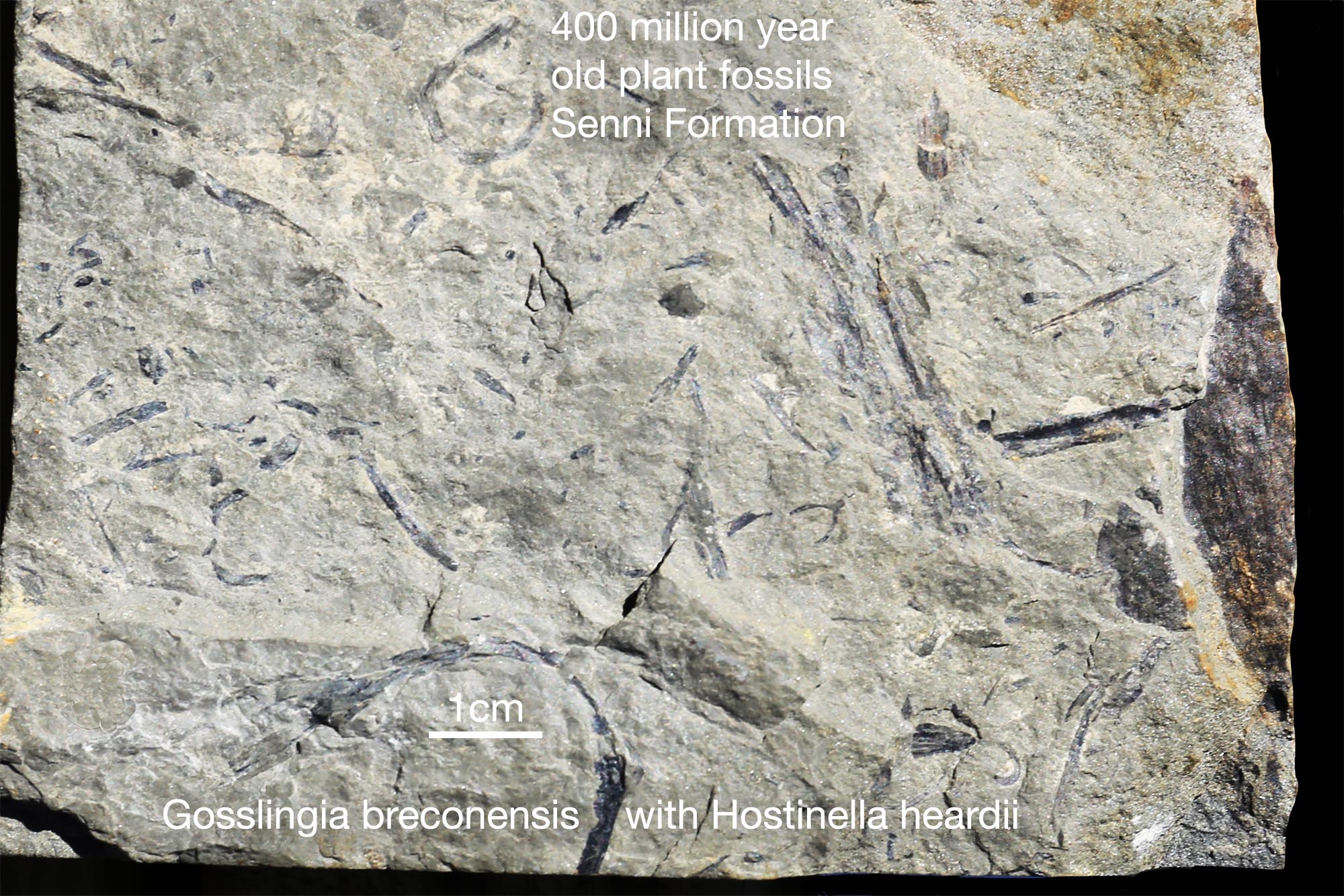 The Senni Formations contains which minerals which often give it a greenish grey appearance?

What is shown in the photo below could be called?
a) convolute bedding
b) soft sediment deformation
c) dewatering structure
d) all of them 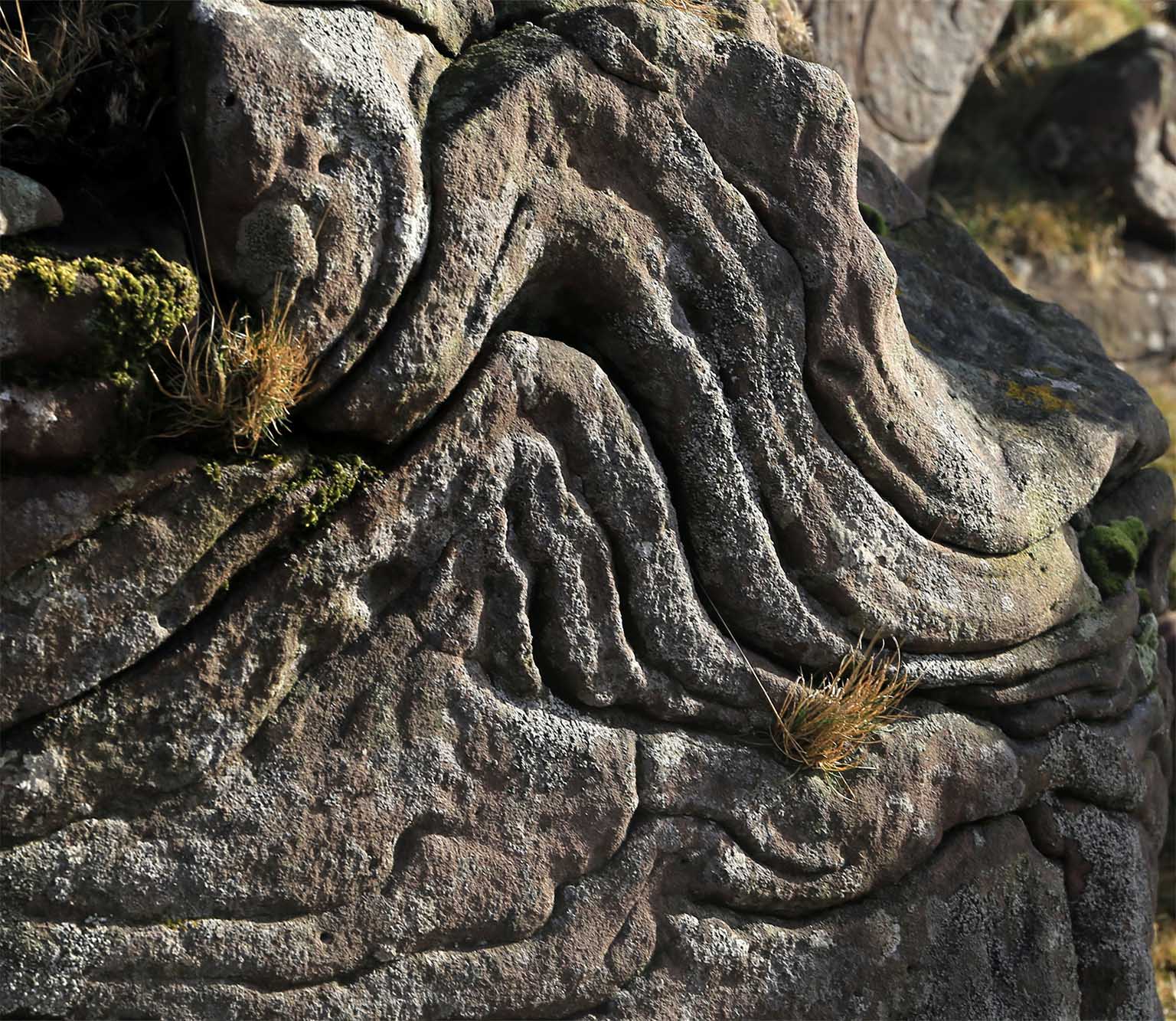